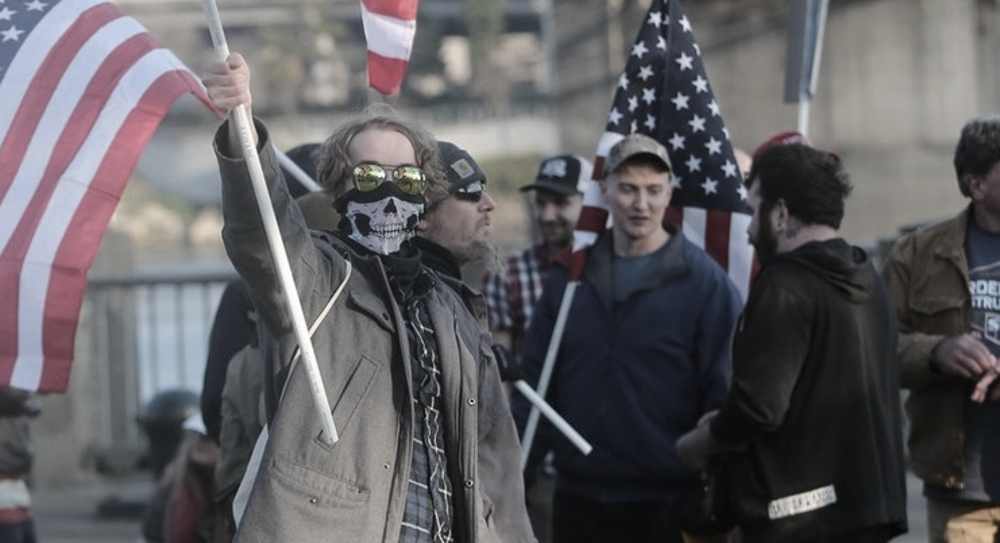 In the past year, fascist organizations across the country have increasingly targeted college campuses. These efforts range from outright intimidation, harassment, and terror; to more subtle attempts at portraying students who adopt far-right positions (such as racism, homophobia, and misogyny) as a victimized group, and to create space for the incitement of hatred and violence against minority populations through a disingenuous concern for “free speech”.

Aside from fomenting bigotry on campus, PSU students associated with reactionary student groups such as the Freethinkers and PSU Students For Trump have spilled into the surrounding community, showing up at events such as Patriot Prayer rallies, assaulting activists and shouting white supremacist slogans. At Joey Gibson’s June 4th 2017 rally, a large crowd of these student fascists showed up with Identity Europa coordinator Jacob Ott. As Rose City Antifa has previously shown, Jacob Ott is a virulent racist and anti-semite. Identity Europa is a national group that promotes “white identitarianism”: a poorly-concealed white nationalist strain of fascist ideology. Similarly, a number of the fascists who joined Ott at Gibson’s rally on June 4th have a history at Portland State University of attempting to conceal their own racism as merely support for the far-right. The Freethinkers, along with the now-defunct and certainly-not-SALP-recognized “PSU Students for Trump”, are one of the groups that has been utilized to obscure these individuals’ more sinister, racist intentions. 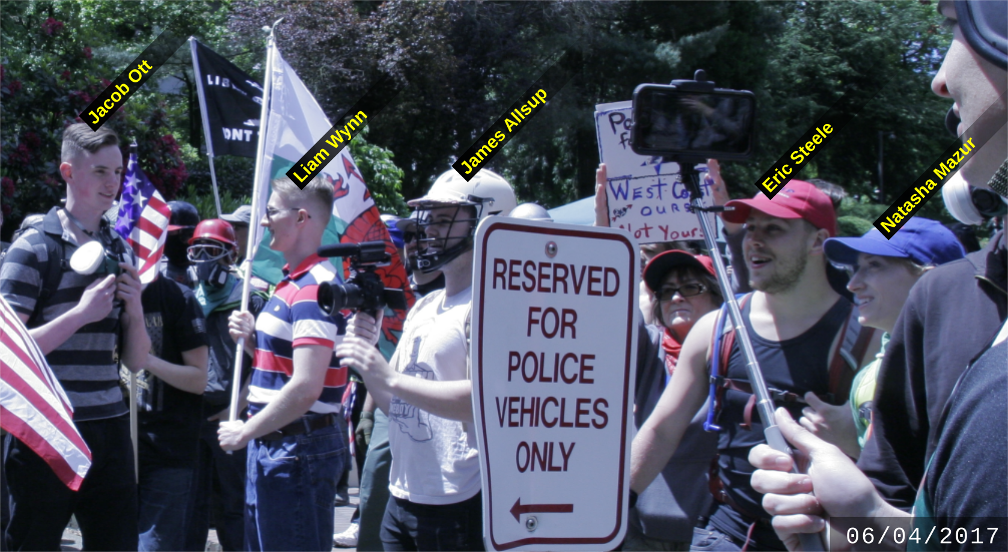 “PSU Students for Trump” was a far-right group created in April of 2016 in the unsuccessful shadow of the online “White Student Union”. Centered around another Facebook page thought to be created by the same students, PSU Students for Trump initially existed only on the internet, largely for the purpose of trolling fellow students with racist memes. When a number of students objected to the group’s virulent racism, they were bombarded by rape and death threats, hate mail, and racist propaganda, all directed by members and supporters of PSU Students for Trump. After their initial in-person “meeting” was overwhelmed by opposition from a number of radical student groups, the group drew attention from far-right media and “free speech” enthusiasts around the country. Unsurprisingly, all that attention attracted other fascists from the region, and the volume and severity of rape and death threats, hate mail, and racist propaganda increased. We now recognize these events as the precursors of Joey Gibson’s Patriot Prayer rallies that began in early 2017. Then, as now, fascists and white supremacists use the space of these far-right rallies to congregate, organize, and attack activists and at-risk groups. 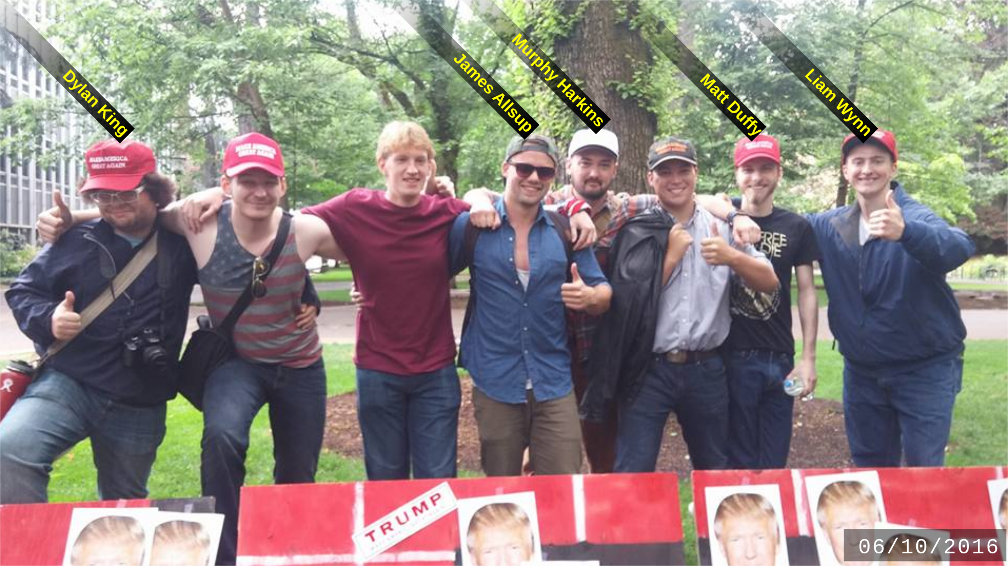 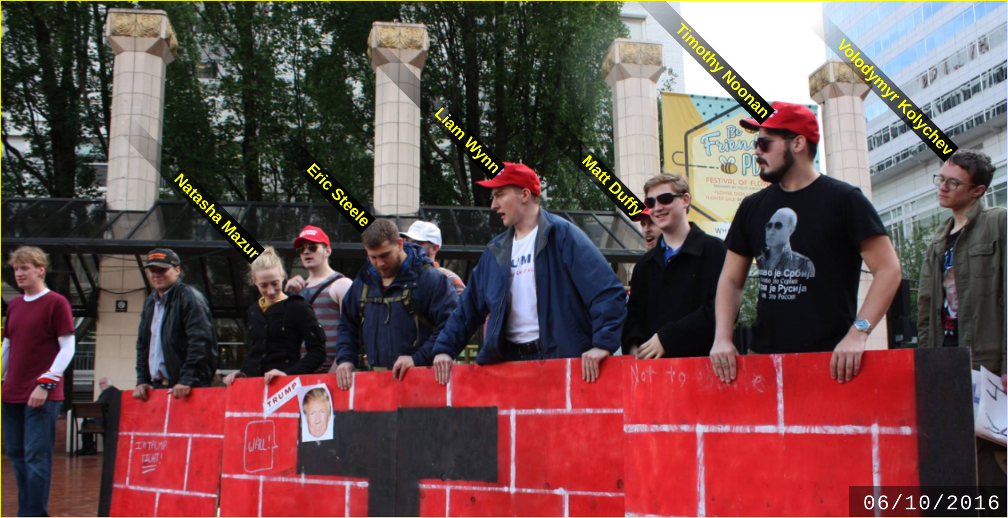 Although many of those fascists who were around the PSU Students for Trump scene have since graduated, they are still in the area. They have gravitated towards white nationalist groups like Identity Europa, which allow them to shield the full nature of their racism and authoritarianism from the public, while still organizing to threaten communities. Some have gone even further, joining online networks like that of the Daily Stormer. 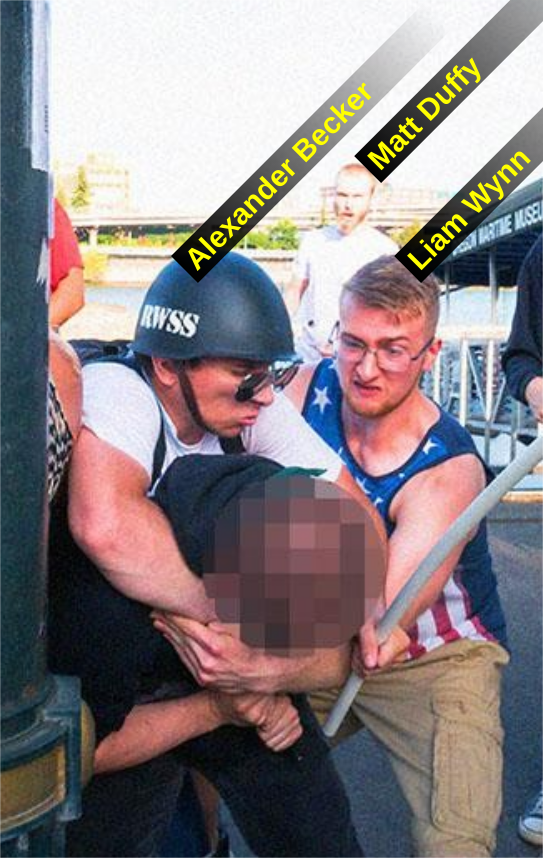 Recently, Rose City Antifa revealed that one member of the fascist group PDX Stormers, named Alexander Becker, was part of a group responsible for posting racist fliers at Portland Community College in December. Alexander Becker not only attended Patriot Prayer rallies, but kept the company of fascists from Portland State University such as Liam Wynn and Ethan Devries, who were previously members of PSU Students for Trump. It is imperative that we look past the far-right’s bad-faith invocation of “free speech” and understand these far-right groups for what they are: opportunities for fascist networking, to better accomplish their goals of intimidation and violence against the community. And make no mistake, violence is the ultimate goal of fascists on campus.

Rose City Antifa is in the process of tracking a number of these individuals who continue to regularly take part in fascist activity online, as well as in real life (such as at Joey Gibson’s rallies). What follows is a list of fascists with past connections to the Freethinkers and PSU Students for Trump, who have been actively engaging in fascist activity since that time.

Ethan Devries is an internet troll who has veered into fascist memes and other rhetoric over the last couple years. He has been seen attempting to infiltrate a number of left and liberal events in Portland, such as the Refuse Fascism event on November 4th 2017. He was also at the Patriot Prayer anti-immigrant hate rally on December 9th, 2017. 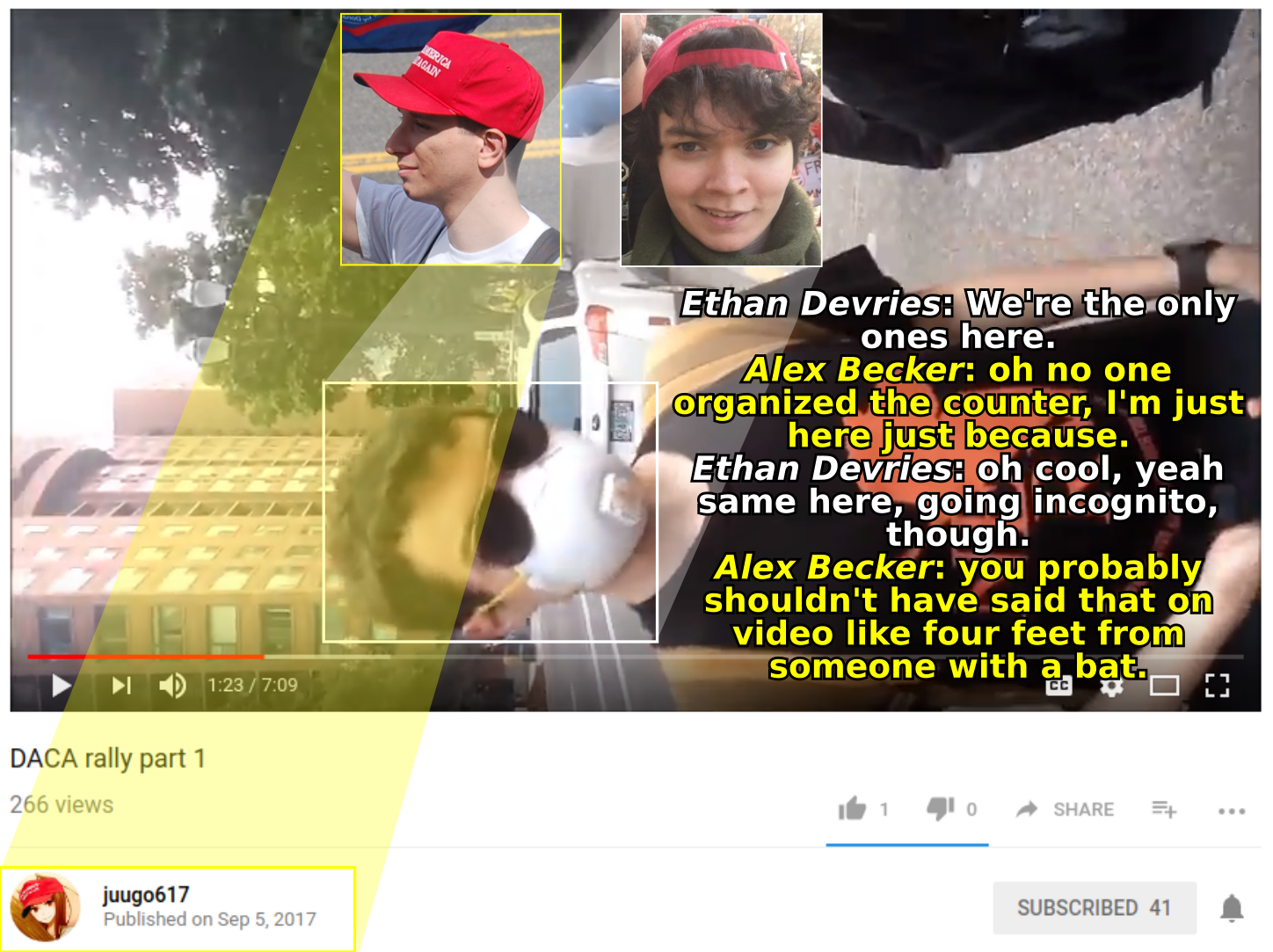 On September 5th, 2017, hundreds of people rallied in downtown Portland in the wake of Donald Trump’s announcement that he would be cancelling the DACA, or “Dream Act.” A small number of fascists were also in attendance. Ethan Devries was filmed by Vancouver WA neo-Nazi Alex Becker slinking around the demonstration while claiming that he was “going incognito.” 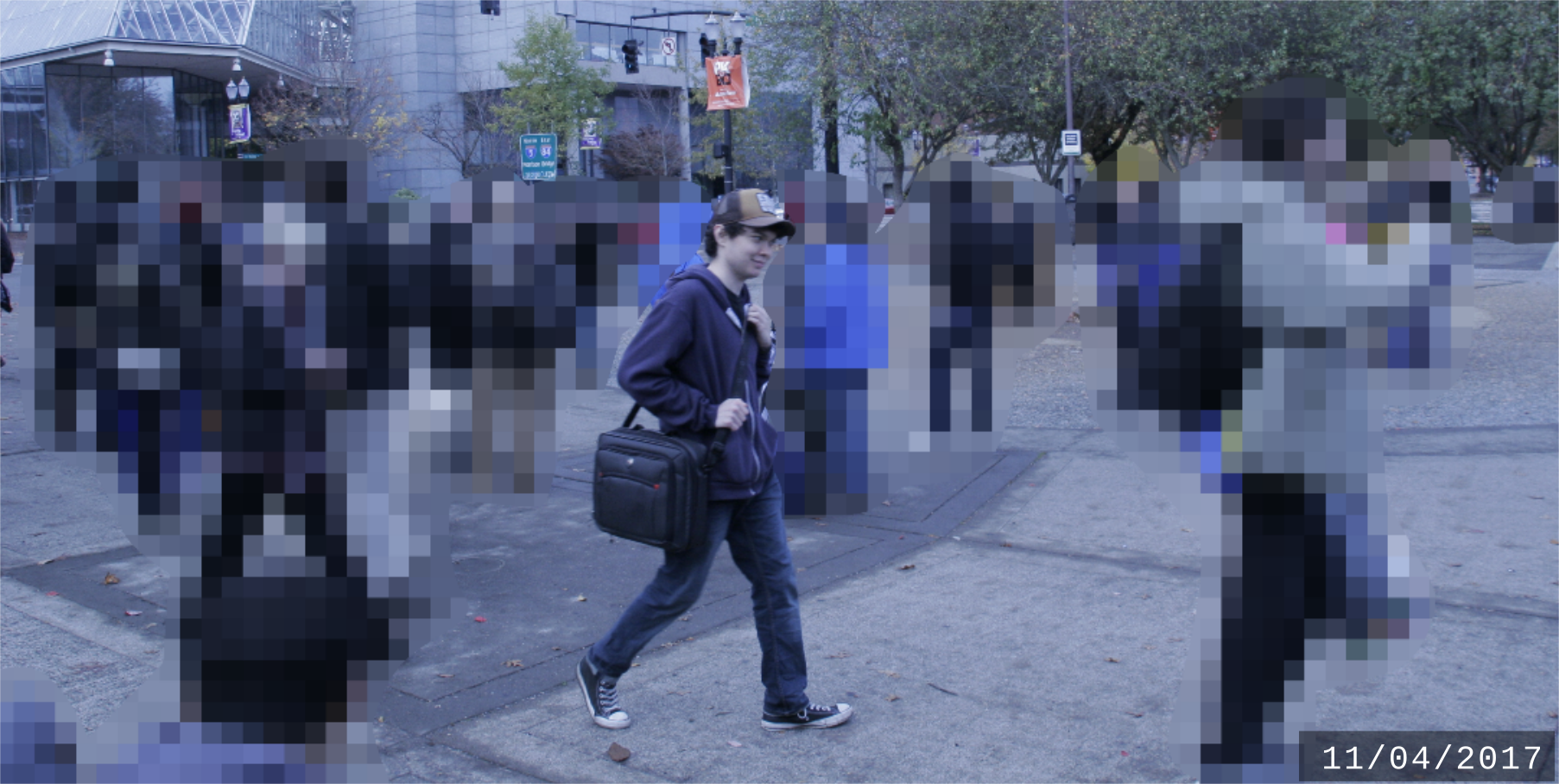 Ethan Devries expresses hatred for people of color on facebook.

Cody Bussard is a fascist and racist, who in addition to posting racist memes on social media, has attended a number of Patriot Prayer events, such as the waterfront rallies on June 30th 2017 and August 6th 2017, and the anti-immigrant hate rally on December 9th 2017. He has often been seen in the company of Liam Wynn, Matt Duffy, and Identity Europa coordinator Jacob Ott. 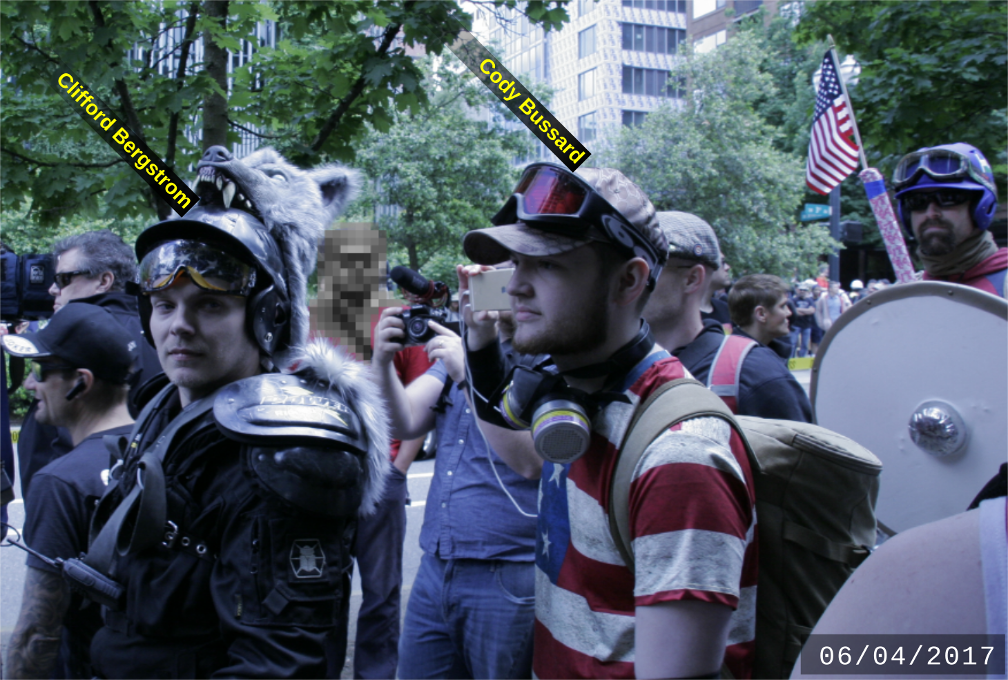 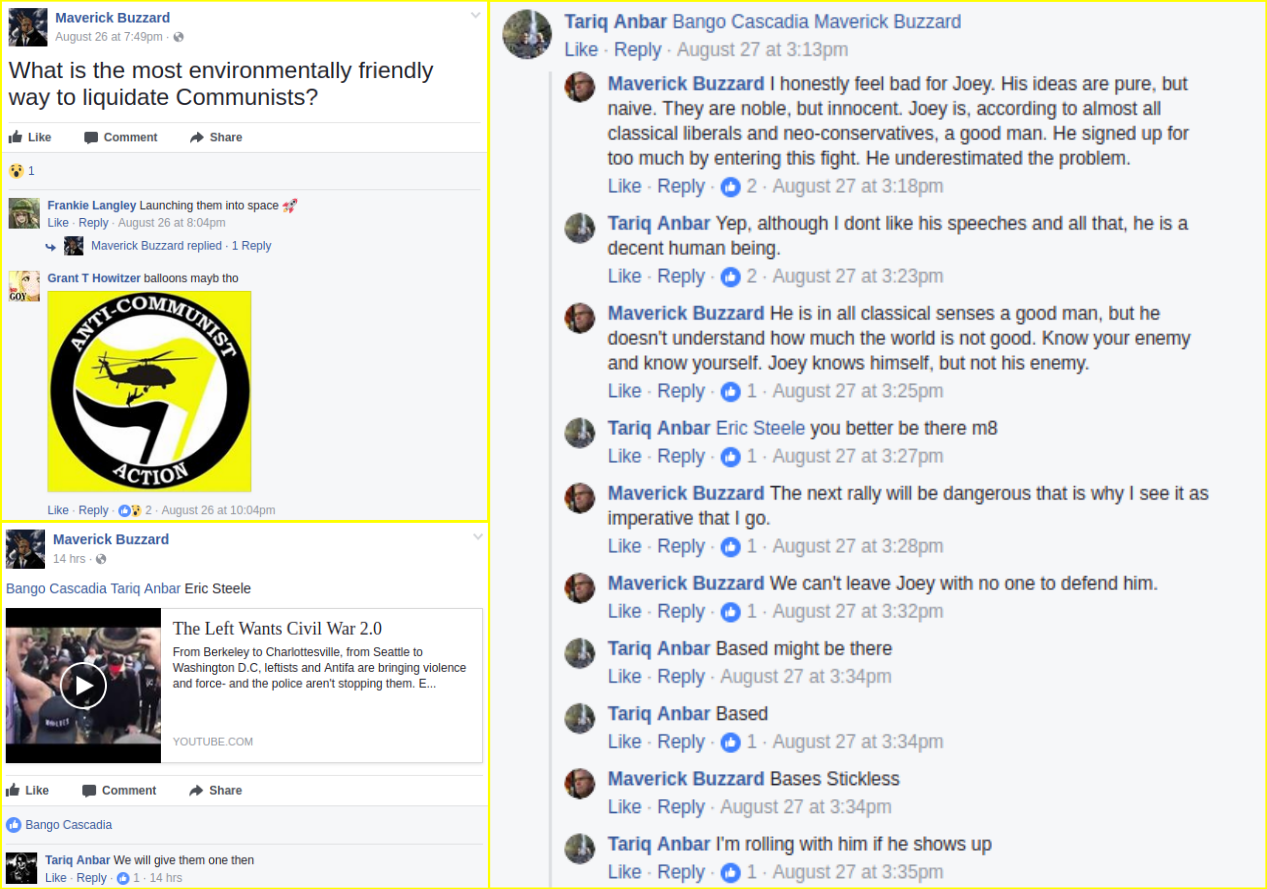 Cody Bussard’s (aka Maverick Buzzard) facebook posts reveal a preoccupation with murdering political dissidents, exhortations to violence, and a conversation with his neo-Nazi friend Thorsson Snyder (aka Tariq Anbar) revealing their feelings that Joey Gibson is naive but that they admire him for the overlap between his reactionary politics and their fascist ideals. Other participants in these threads include Ethan Devries (aka Frankie Langley) and Liam Wynn (aka Bango Cascadia). 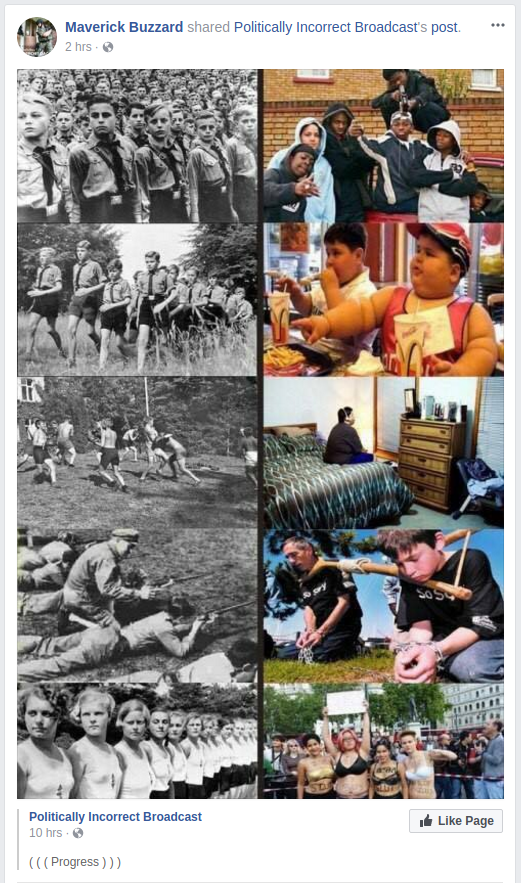 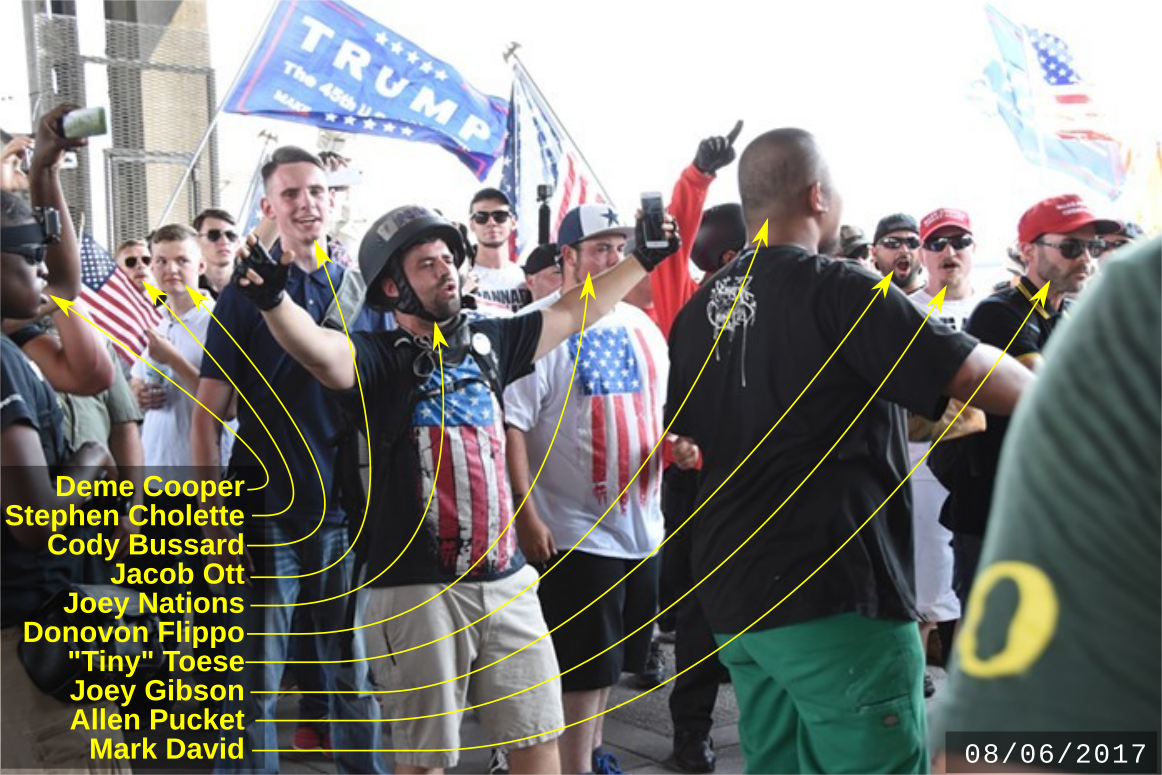 Matt Duffy was at the original PSU Students for Trump protest, and also attended a number of Patriot Prayer events in the company of Liam Wynn, Cody Bussard, and others.

Duffy is currently believed to live in Beaverton. If you have any information about him, his job, or his whereabouts, please contact us.

Natasha Mazur was at the original PSU Students for Trump events, and also attended Joey Gibson’s June 4th rally in the company of Identity Europa and other fascists. 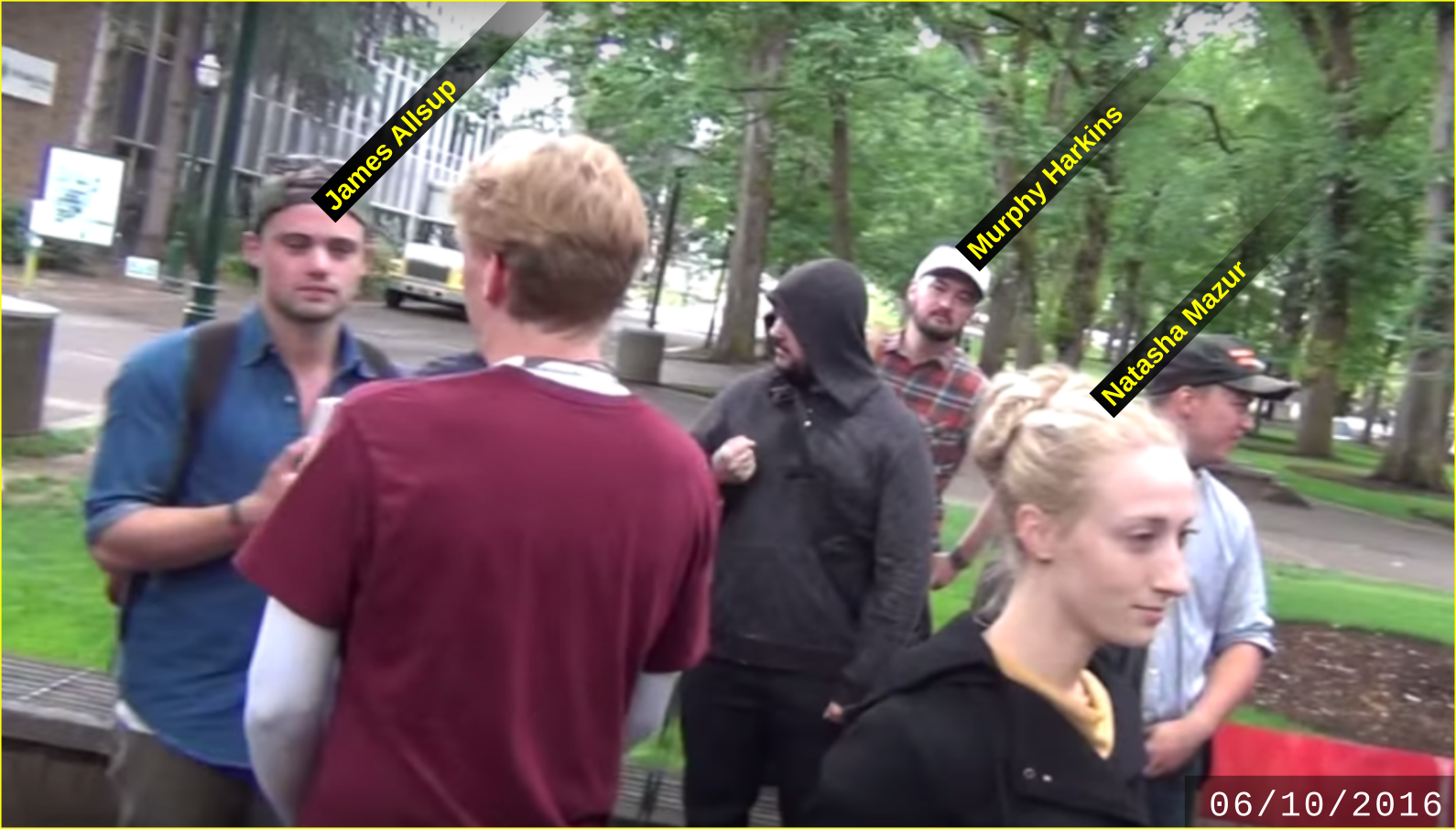 Natasha Mazur participates in a PSU Students For Trump “build the wall” event along with Murphy Harkins, James Allsup, and others. 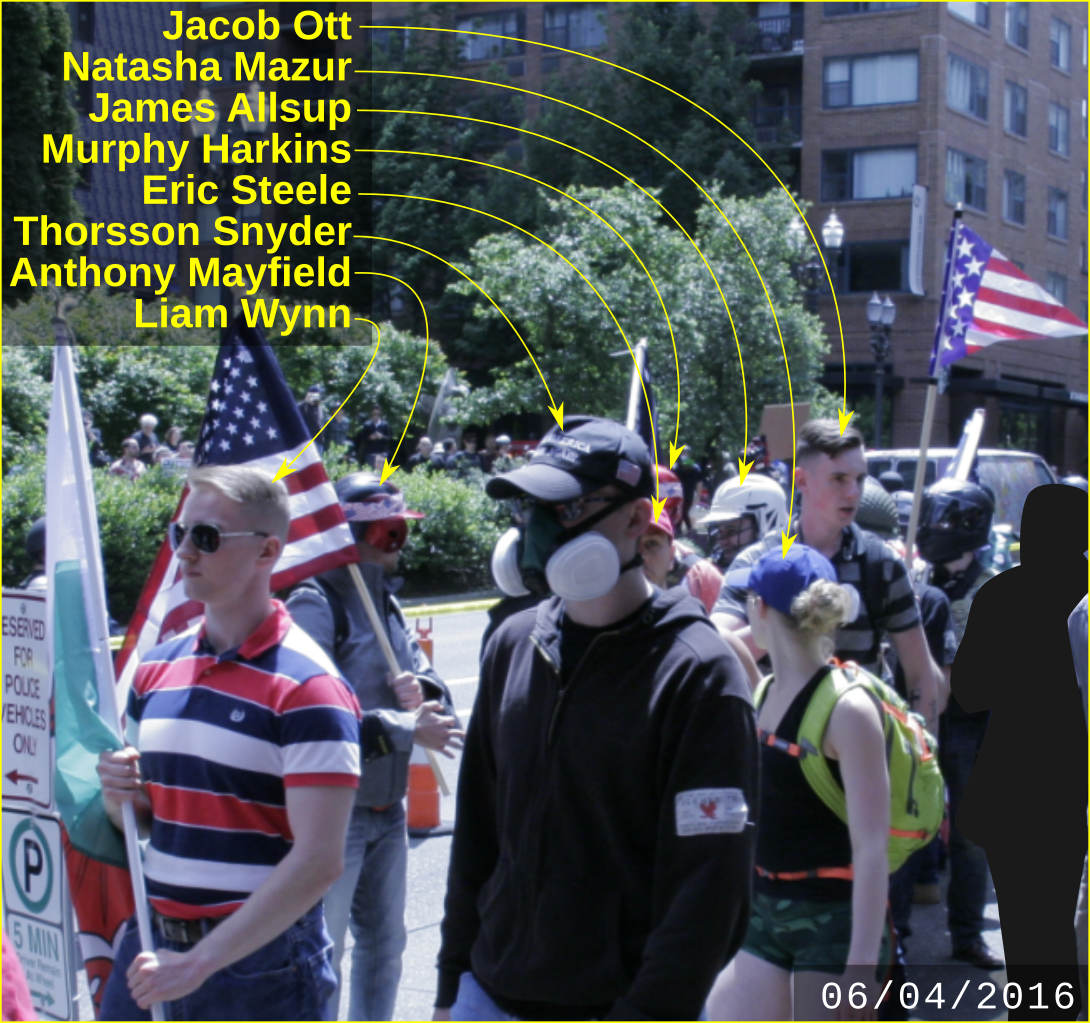 Natasha Mazur’s Current Information:
Date of Birth: April 10, 1992
Work: Mazur is listed as owning two businesses: Jellybean Productions LLC, and Promise Natural Foods & Bakery. Both of these businesses are listed as running out of 503 SE Main St Canyonville, OR. However, it appears that recently the store and bakery shut down, and the business registrations have lapsed. Mazur lived above the store, in the same building. It is not clear if she still lives there at this time.
Living situation: Mazur was living with Eric Steele in Canyonville.
School: Camas High School; Portland State University
Phone: 541-839-4167 (for the Bakery)
Vehicle: White Toyota Pickup Truck, OR SL30479

Eric Steele was at the original PSU Students for Trump events, and also attended Joey Gibson’s June 4th rally in the company of Identity Europa and other fascists. 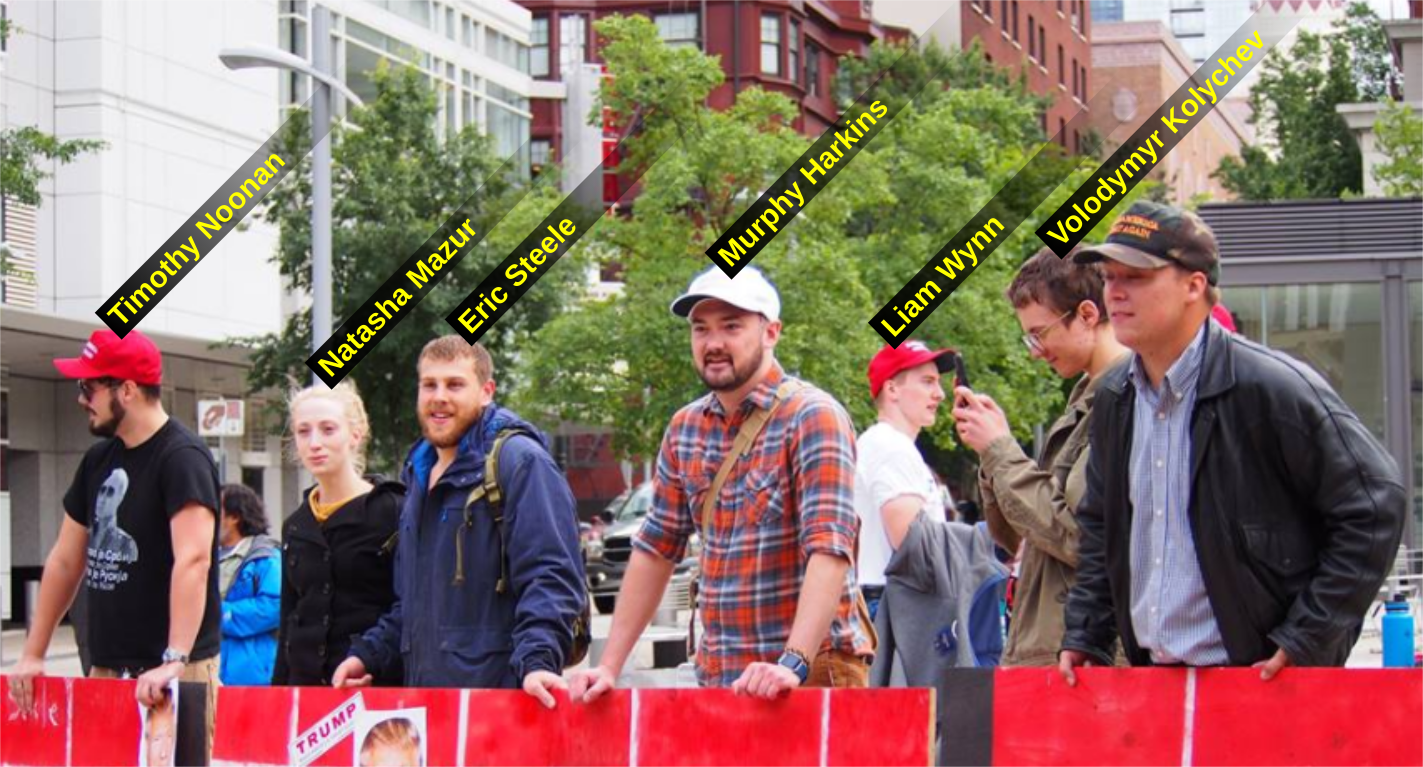 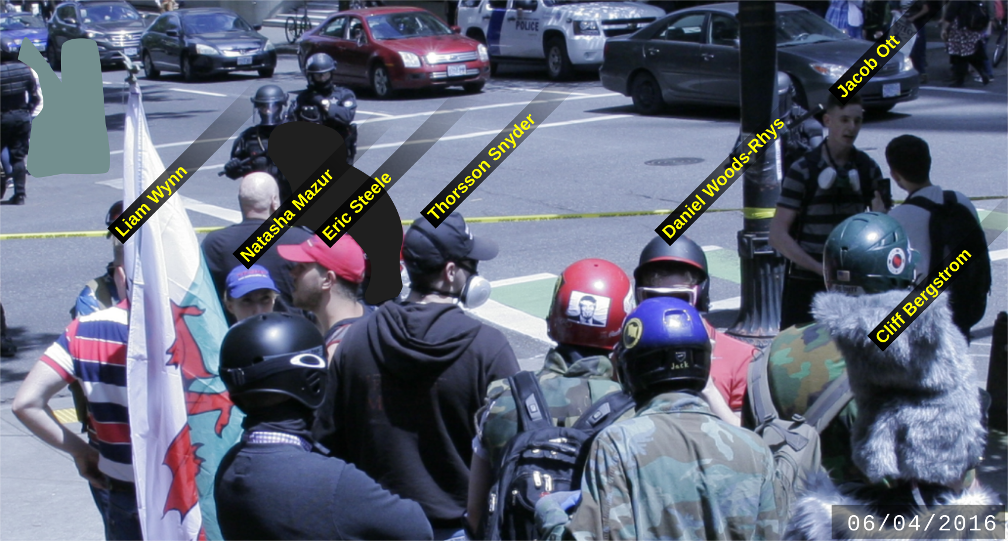 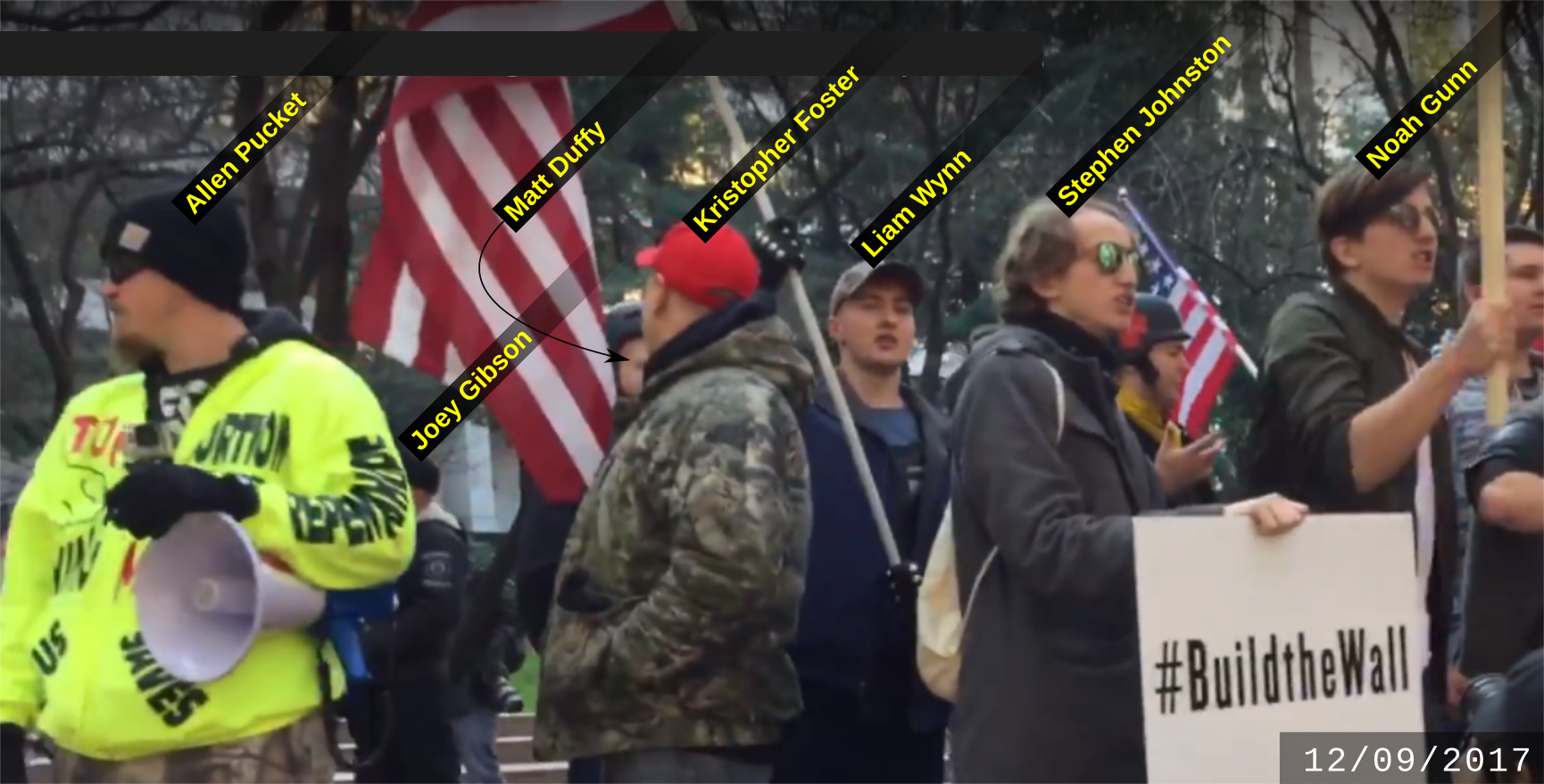 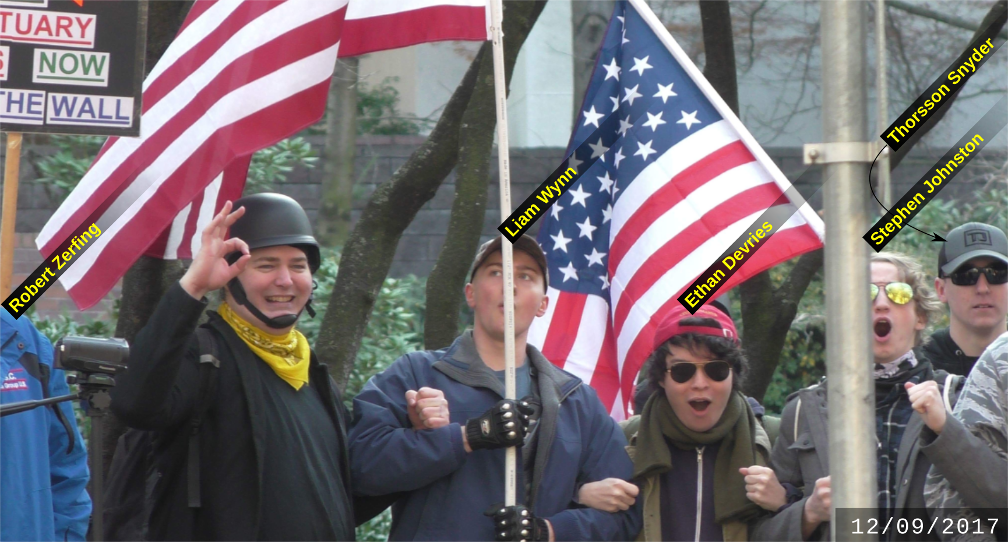 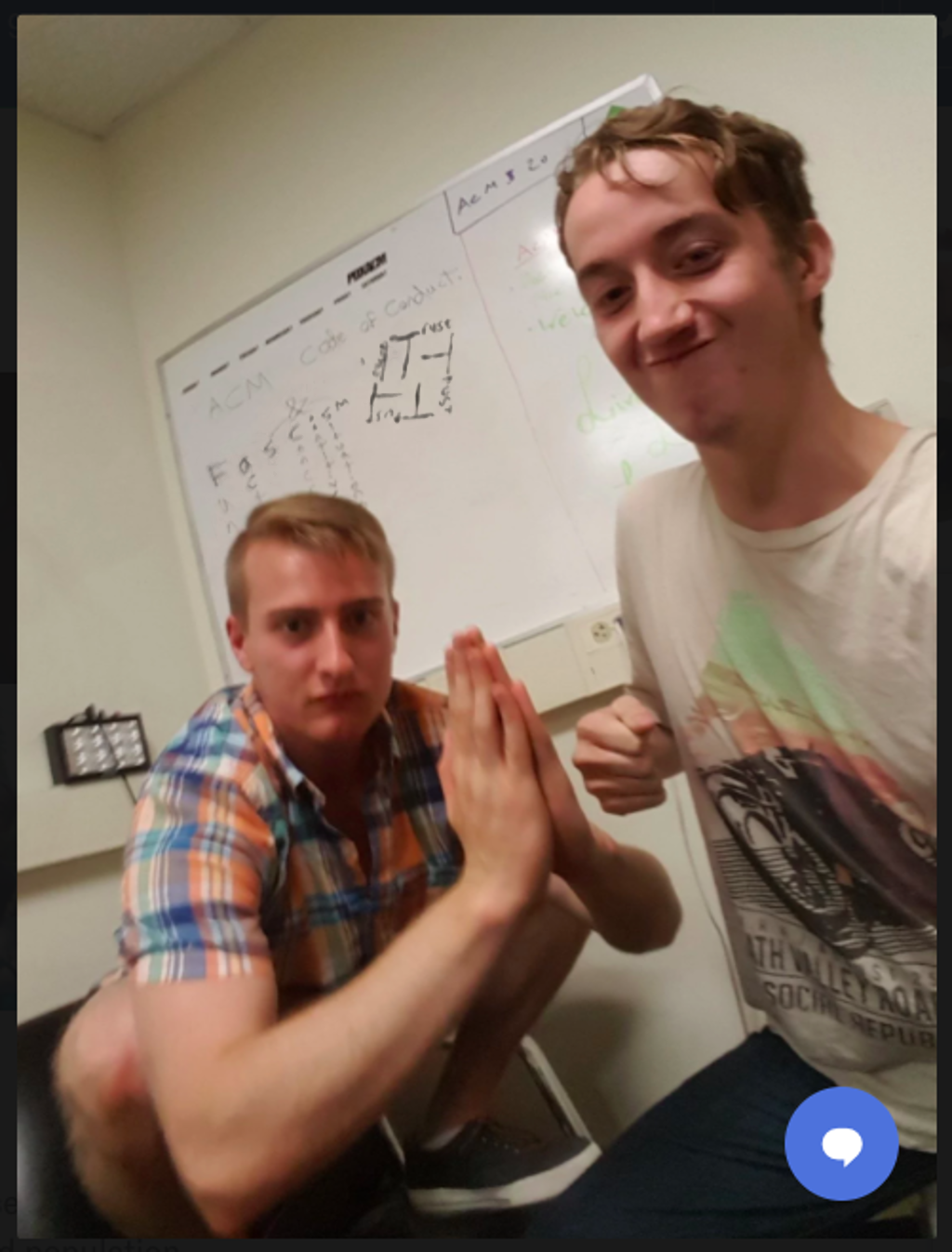 Stephen Johnston and Liam Wynn pose in front of a swastika they’ve drawn.

If you have any information about Stephen Johnston, his job, or his whereabouts, please contact us.

Volodymyr Kolychev, who we have written about before, was one of the main organizers of the PSU Students for Trump events. He calls himself a “race realist,” which is a racist misunderstanding of biology, thinly-veiled as science. He frequently incited the trolls who frequent 4chan, 8chan, and other alt-right forums to direct harassment against activists on the PSU campus.

Kolychev uses the anti-semitic triple-parentheses meme and identifies himself as a national socialist on twitter (left). In an older tweet (right), he also basks in the attention of infamous neo-nazi David Duke after sending him a selfie posing in front of a poster disseminated by campus anti-fascists in response to his racist activities at PSU. 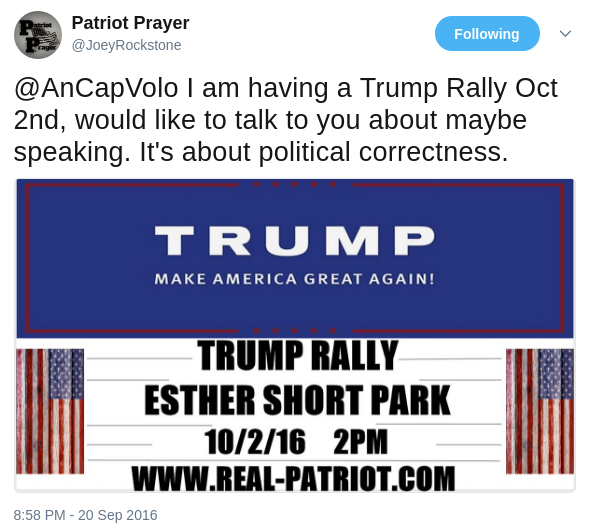 Pre-Patriot-Prayer Joey Gibson (aka @JoeyRockstone) extends an invitation to young fascist Volodymyr Kolychev to speak at one of his early Trump rallies. 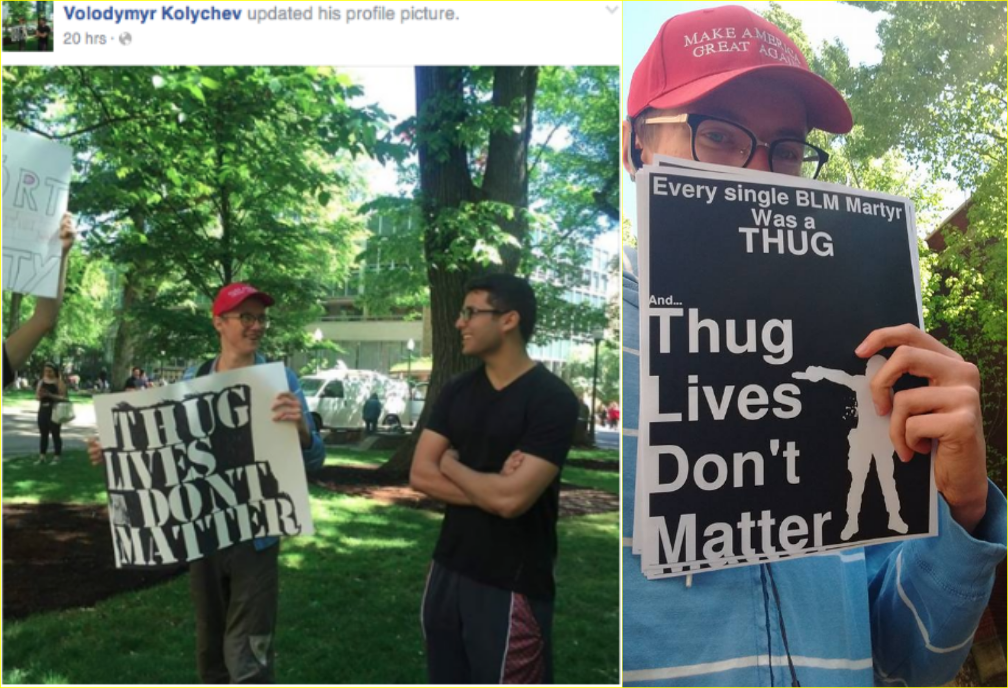 Kolychev displays racist signs celebrating the deaths of black people at the hands of police.

If you have any information about Volodymyr Kolychev, his job, or his whereabouts, please contact us.

Tylor Phelps is a fascist, who posts a large number of memes to that effect online, including the “It’s Okay to be White” racist dog-whistles. 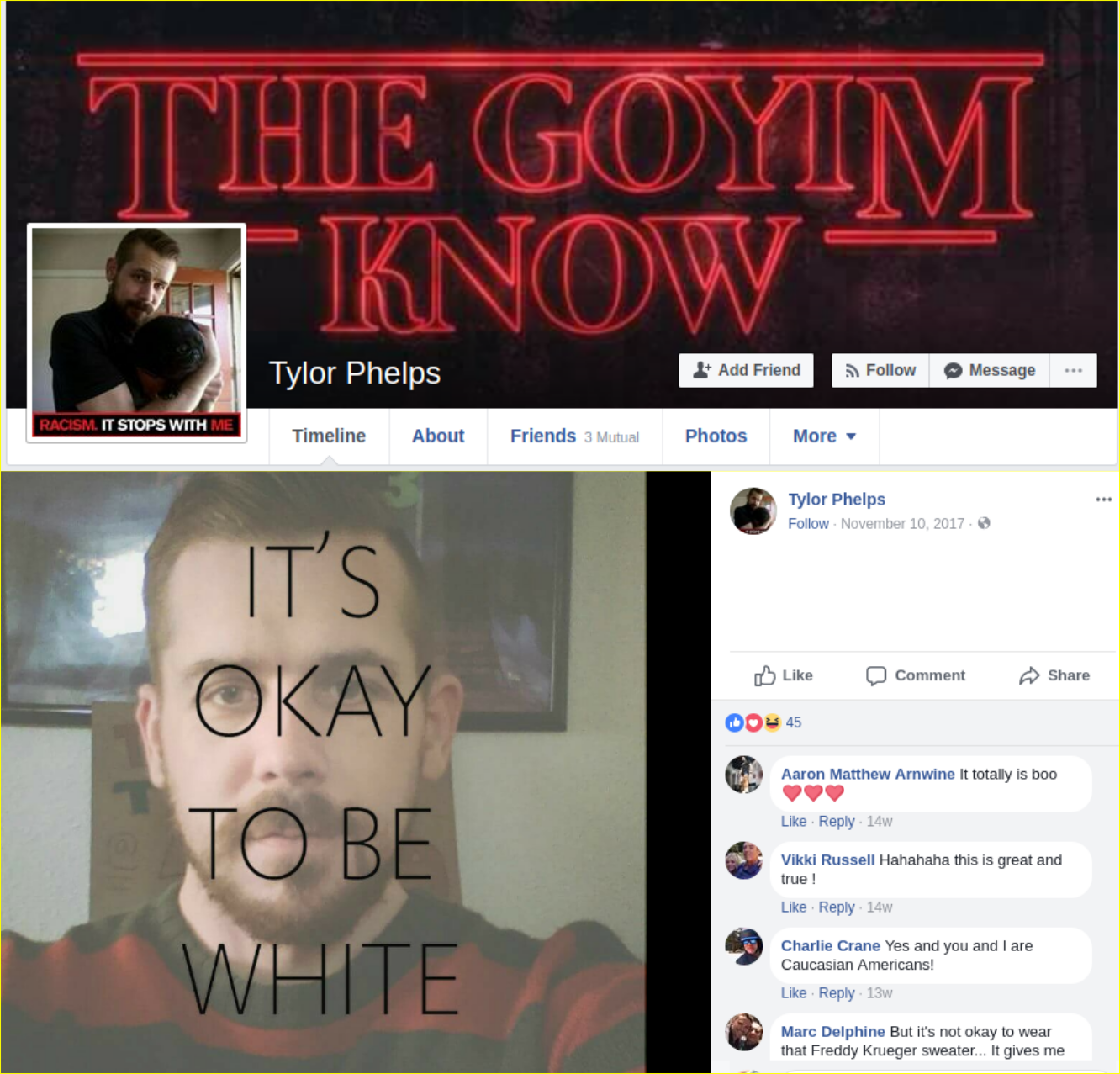 Phelps’ facebook page displays a header with the antisemitic neo-Nazi slogan “The Goyim Know,” and he has made several posts which recite the neo-Nazi dog-whistle “It’s Okay To Be White” campaign. 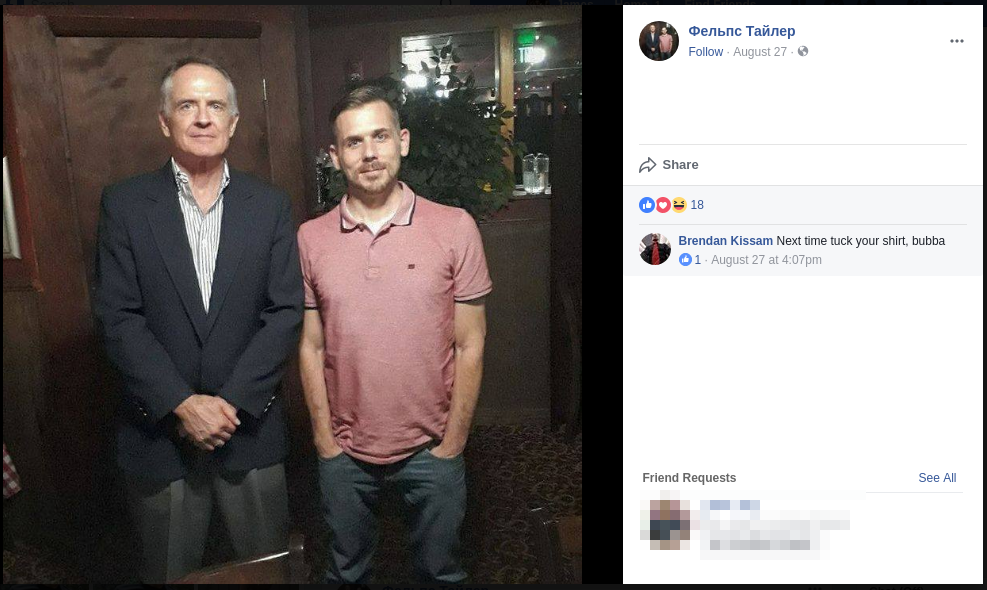 Phelps shares a photo of himself posing with the founder of white supremacist “American Renaissance” magazine, Jared Taylor. 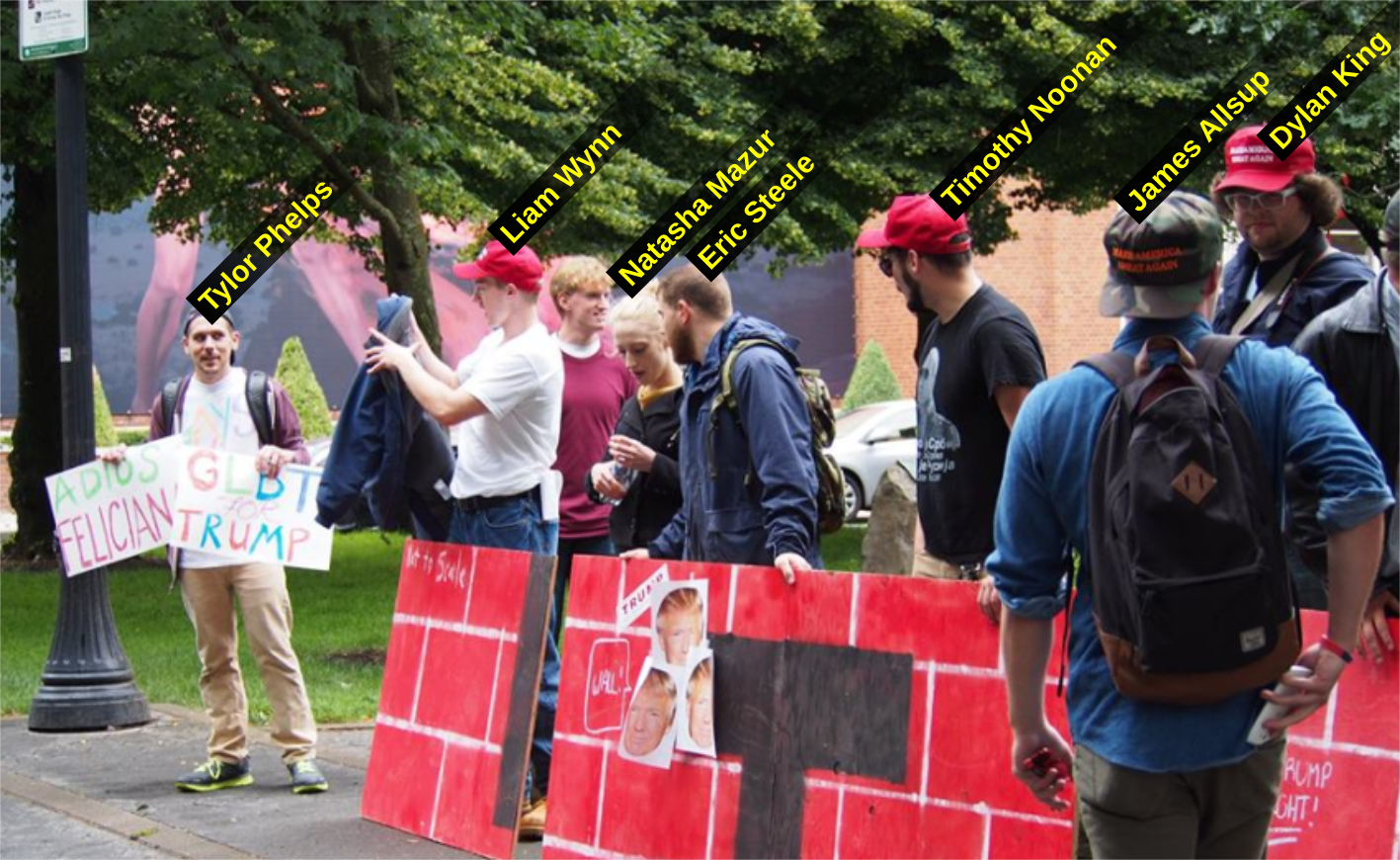 If you have any information about Tylor Phelps, his job, or his whereabouts, please contact us.

Although we have previously been using the pseudonym “Gary Lee” for this fascist often seen around downtown Portland, his real name is Liam Wynn. Wynn attended the PSU Students for Trump events. He has attended a number of Patriot Prayer rallies, first seen along with other fascists at the April 29th march on 82nd Avenue. He marched with Identity Europa members at Joey Gibson’s alt-right hate rally on June 4, 2017 in the immediate aftermath of Jeremy Christian’s alleged murders aboard the Max train. He has often been seen in the company of Cody Bussard, Matt Duffy, and Identity Europa coordinator Jacob Ott. 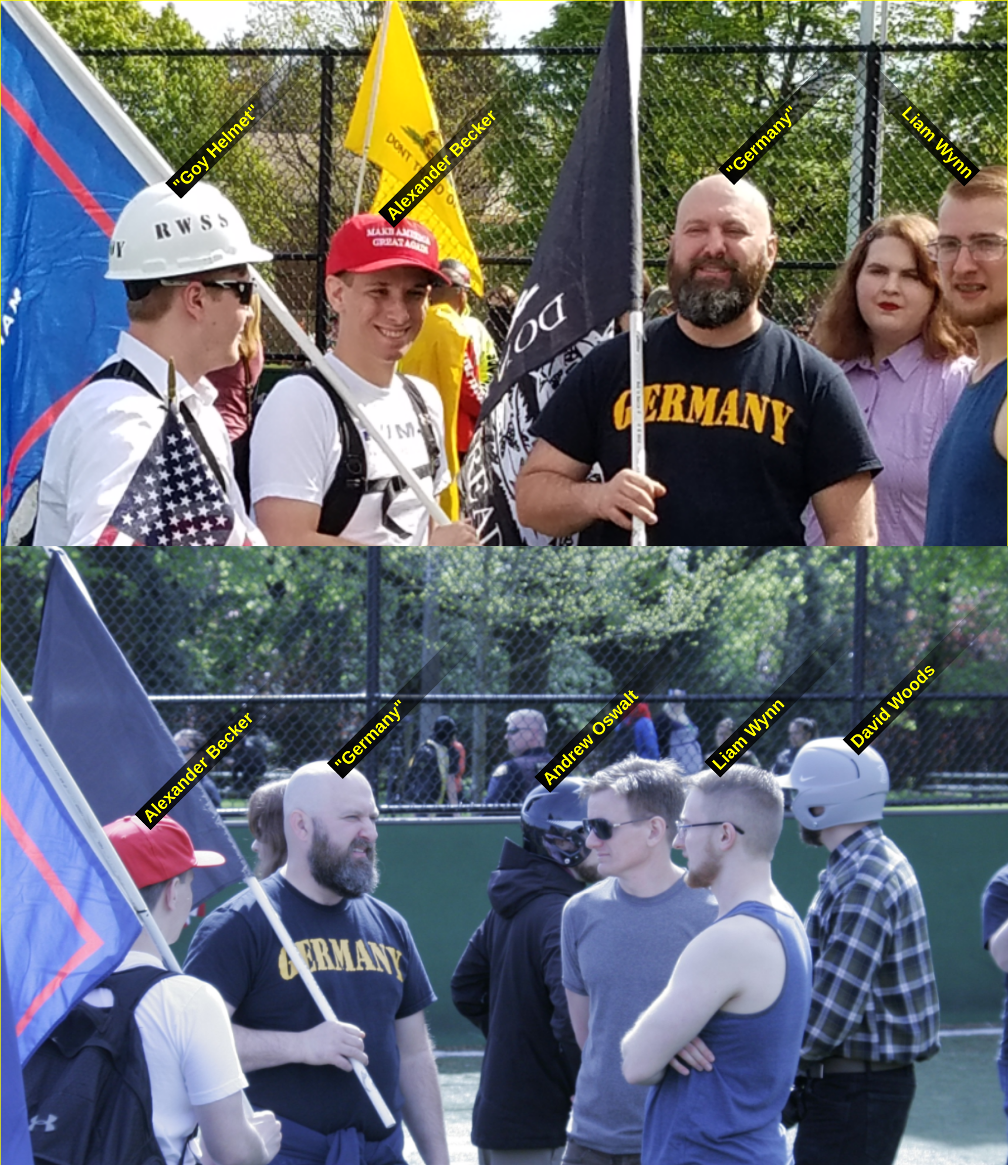 Liam Wynn chats with a cluster of neo-Nazis at Patriot Prayer’s April 29, 2017 rally in the immigrant Montavilla neighborhood. He is seen here with “Goy Helmet,” “Germany,” Alexander Becker, Andrew Oswalt, and David Woods. 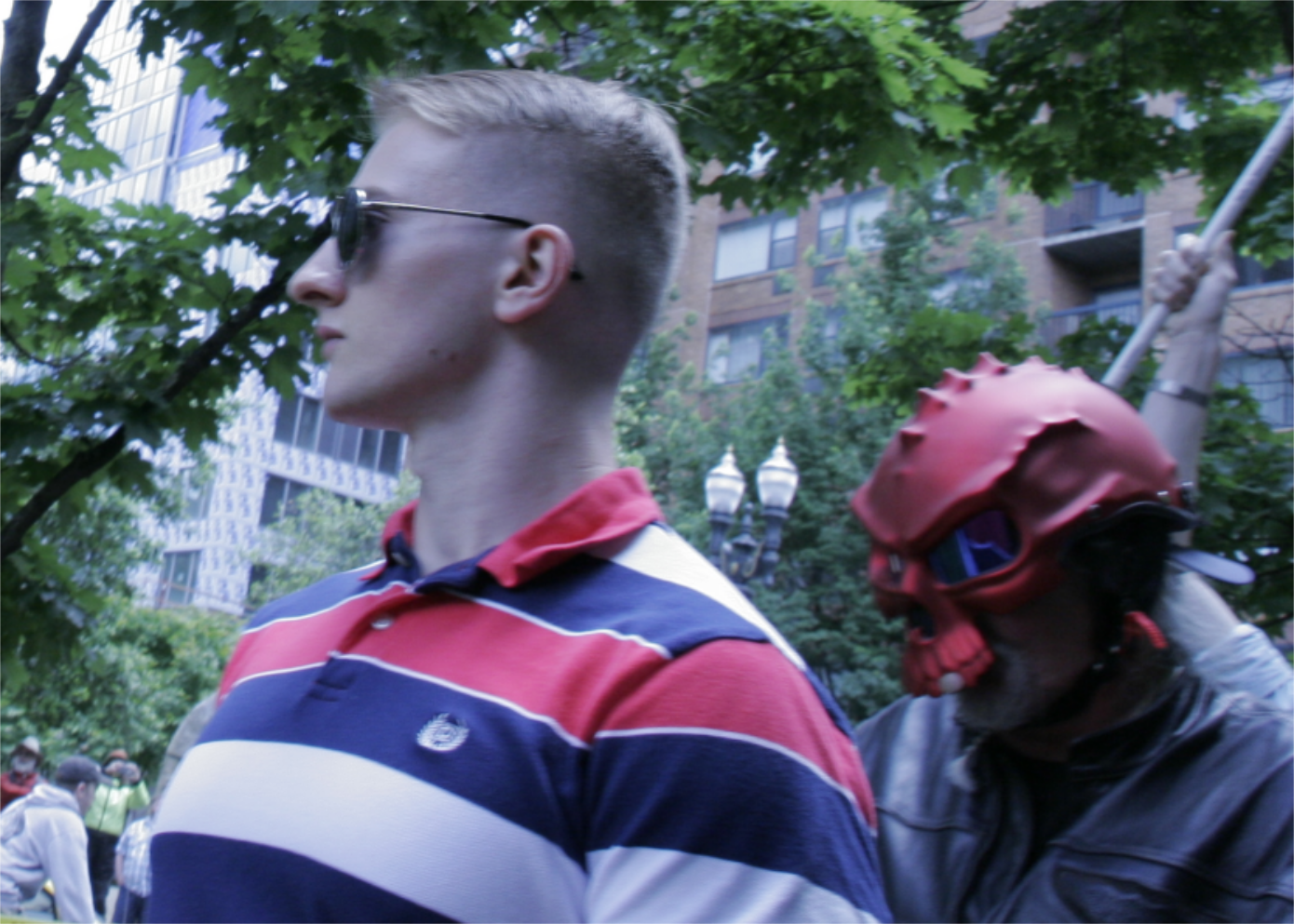 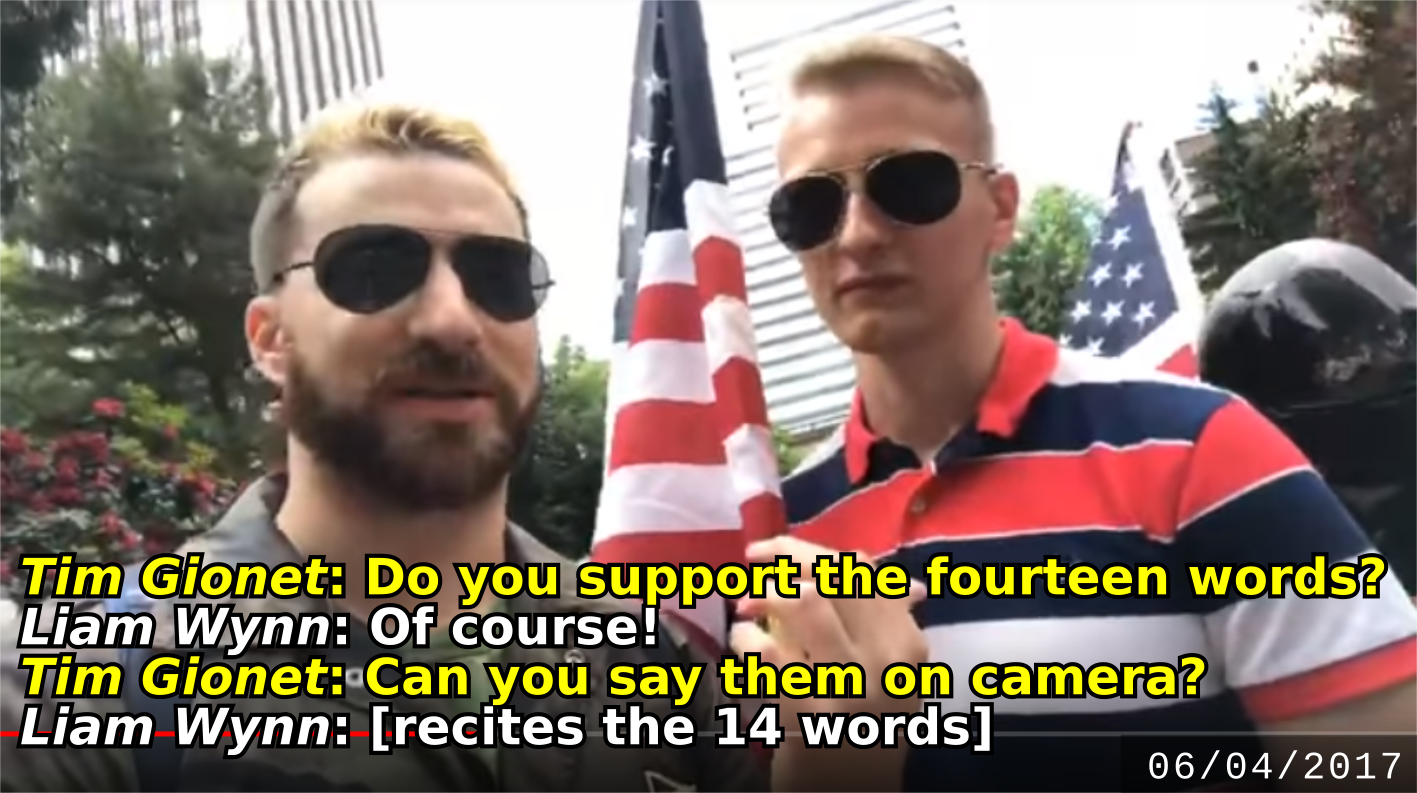 Liam Wynn recites a neo-Nazi slogan at the request of Tim Gionet (aka Baked Alaska), who was Joey Gibson’s special guest and one of the keynote speakers at the June 4, 2017 Patriot Prayer hate rally in downtown Portland. During this conversation on camera, Tim Gionet also identifies Wynn as a “part of Identity Europa”.

Liam Wynn (aka “Gary Lee”) has put out calls-to-action for multiple Patriot Prayer events and tagged regional fascists urging them to attend and proselytize. He is pictured here with proud boys Donovon Flippo and “Tiny” Toese, as well as with local fascists Cody Bussard, Thorsson Snyder, and Raul Gonzalez.

Wynn is seen listening to a speech by Oregon congressional candidate Joey Nations along with neo-Nazi Jacob Ott, and other local fascists such as Cody Bussard, Raul Gonzalez, and Stephen Cholette. 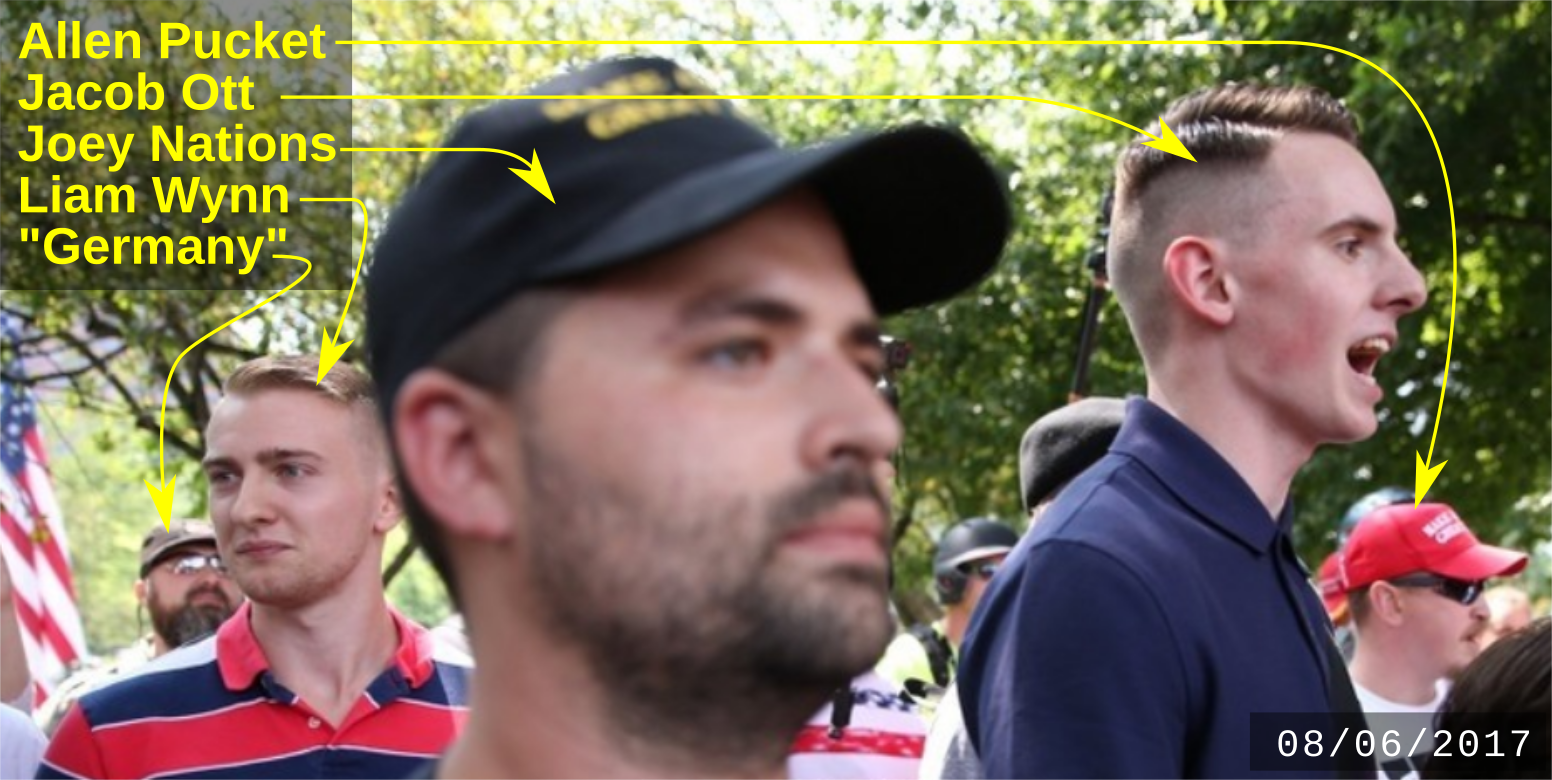 Liam Wynn is pictured at Joey Gibson’s August 6th, 2017 rally on the waterfront along with other white supremacist fascists such as “Germany,” Jacob Ott, Allen Pucket, as well as with Oregon congressional candidate Joey Nations. 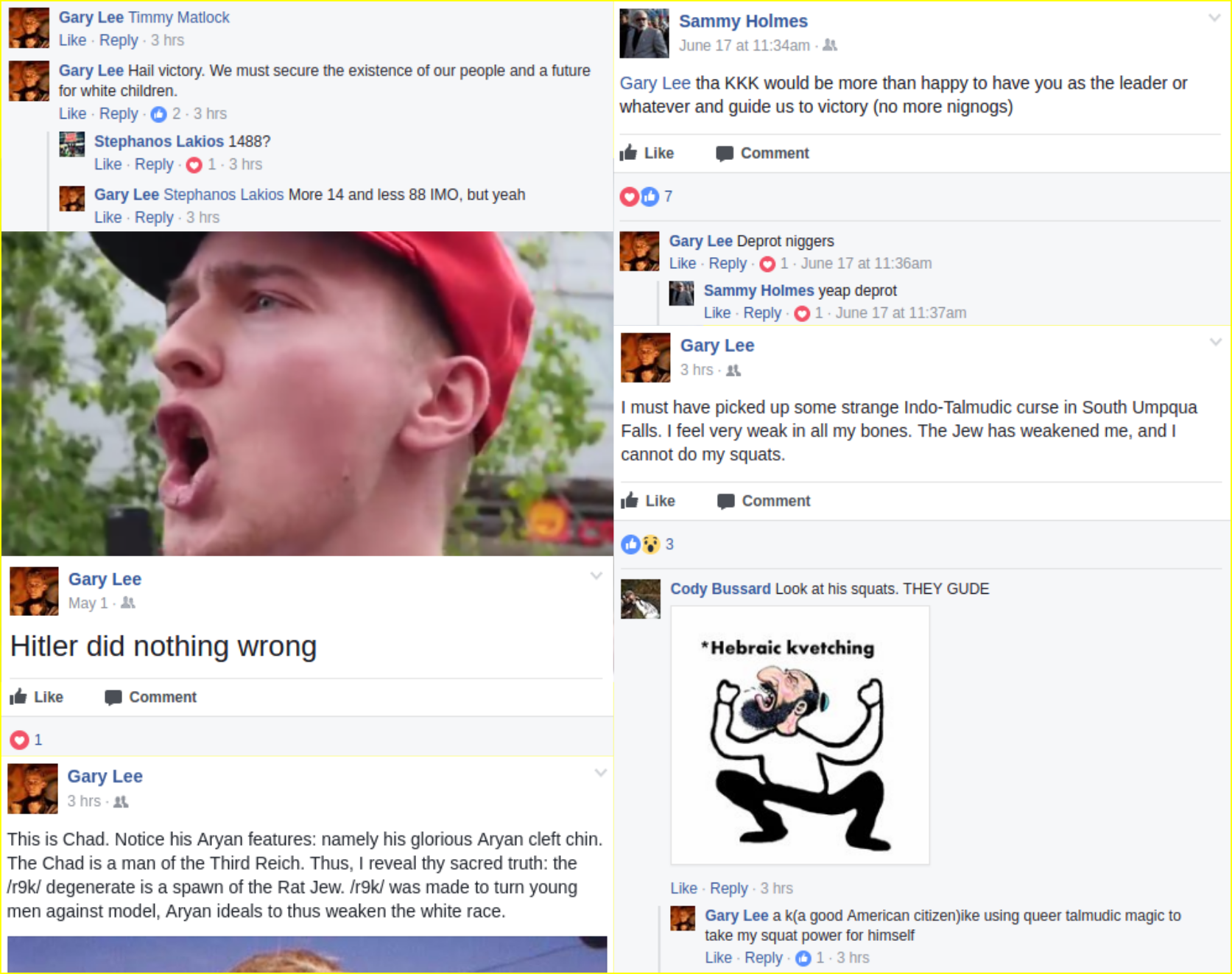 Some of Liam Wynn’s fascist and neo-Nazi facebook posts. 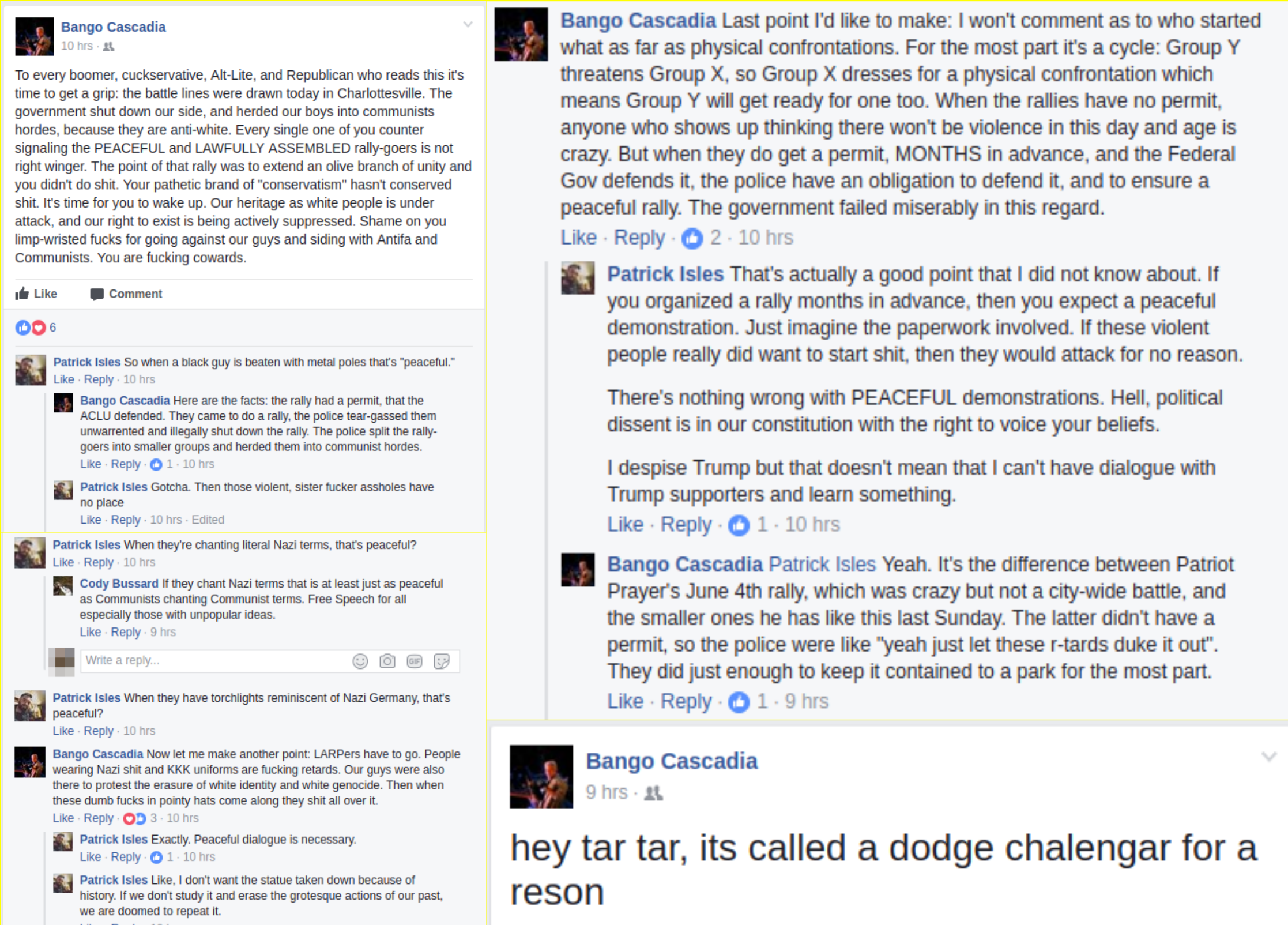 Liam wynn (aka Bango Cascadia) and his friends express support for the Nazis who brought violence to Charlottesville, and joke about the Dodge Challenger used as a weapon by James Fields to murder Heather Heyer. 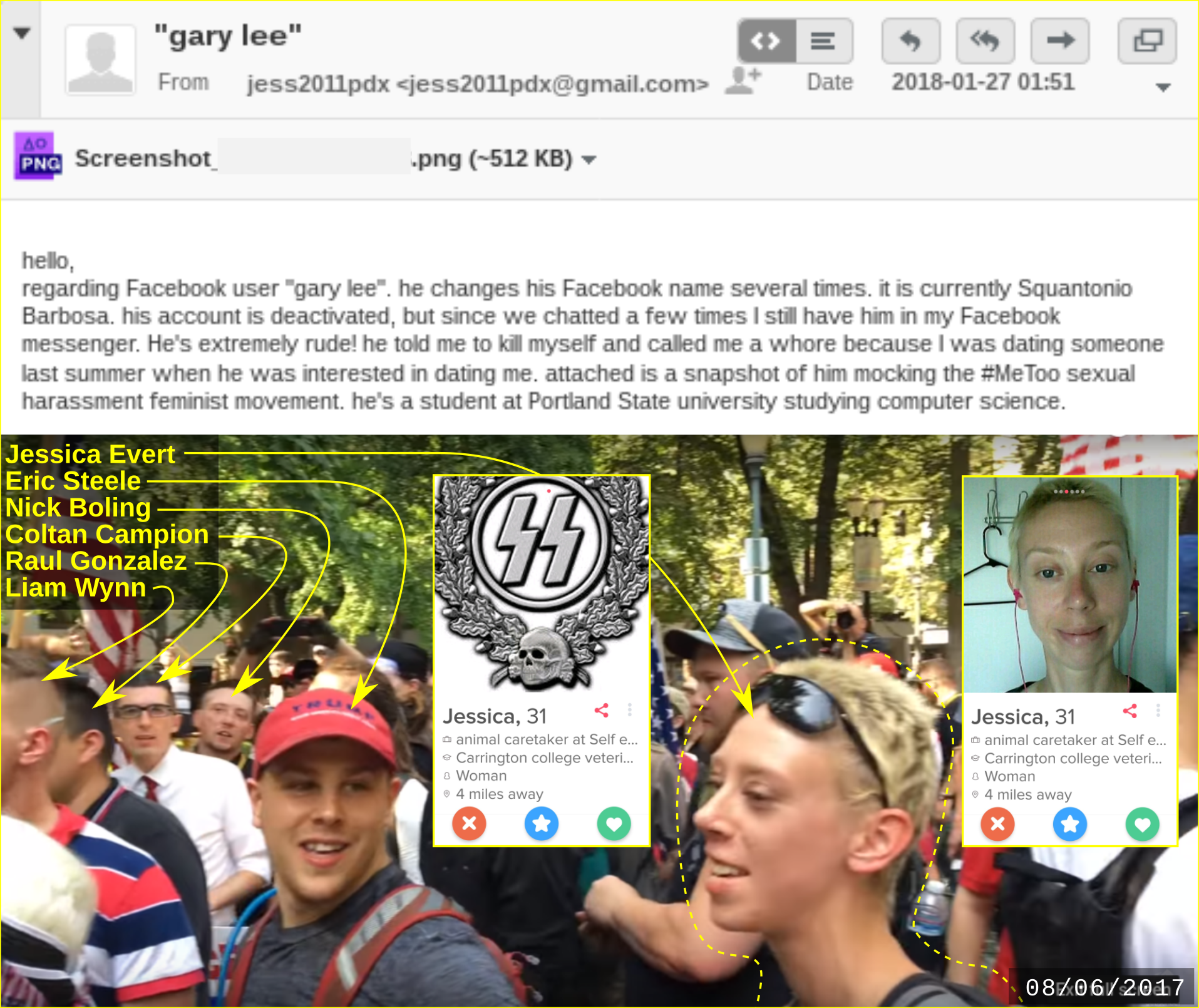 Wynn is not only a violent fascist, but he’s also a misogynist. His online posts mock the “MeToo” movement, and his abusive language caused a fascist woman who Wynn was romantically pursuing to send Rose City Antifa details of his chats.

Report Fascist Activity in Your Community

Portland will not allow its downtown, its educational institutions, and its public spaces to be taken over by fascists and racists. We see through their shallow, patronizing appeal to “free speech,” and understand their genocidal ideology for the threat that it is. If you have information about any fascist or racist organizing either on campus or elsewhere in the area, or details about any of the people mentioned in this article, please contact us at [email protected].