Allen Pucket: A Case Study In Creeping Fascism As Facilitated By Joey Gibson 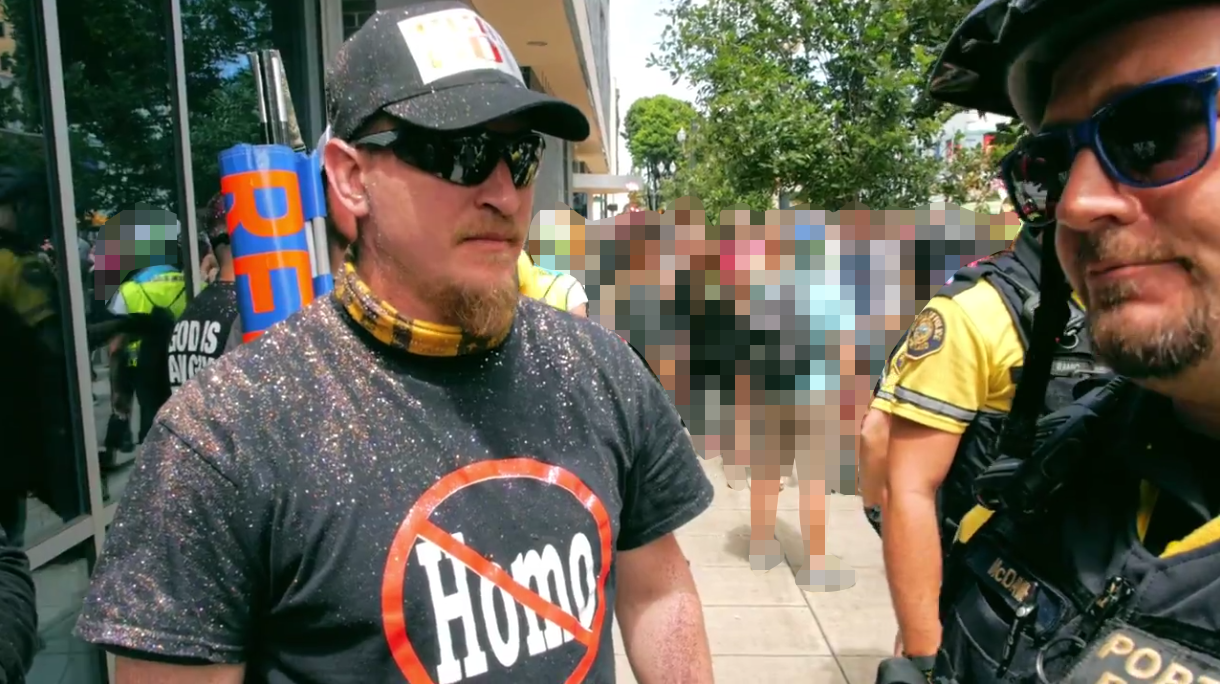 Allen Pucket begs the police for an escort to safety after hurling homophobic hate speech at Portland Pride 2017.

Over the last several months, Rose City Antifa has been tracking the way in which white supremacists use Joey Gibson’s events to recruit and organize from among the far-right. But it is not just the white supremacists pulling them closer– members of the far-right are themselves becoming more visibly radicalized through rubbing shoulders with white supremacists at these rallies. In the company of other racists and bigots, they feel more comfortable expressing their genocidal views, and are rewarded by doing so. In this article, we will highlight a member of the far-right that moved over to explicit white supremacy: self-described white nationalist, Allen Wesley Pucket.

A Bigot Becomes a White Nationalist

Pucket has been known around Portland for a number of years. He resides in Tillamook and frequently harasses members of the community there, but has also jumped at opportunities to travel to Portland in order to harass and engage in violence against activists, community organizers, church congregations, and people generally trying to live their lives. Pucket is the ringleader of a small band of violent bigots known as the “Hell Shaking Street Preachers” (formerly Bible Believers USA), whose numbers have occasionally included Grant Chisholm– an erstwhile antiques entrepreneur whose side hobby of “street preaching” with Allen Pucket earned him the nickname “Hipster Fred Phelps” from the Daily Beast in 2013. 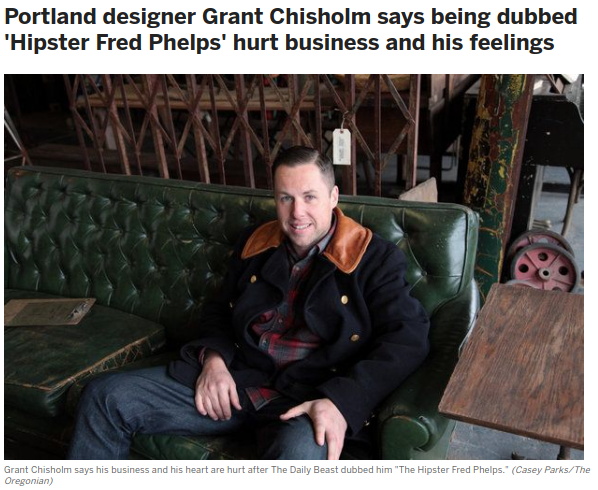 For a number of years, the hateful rhetoric of Pucket’s bigoted entourage has generally tended toward more common channels of far-right resentment: homophobia, racism, Islamophobia, and misogyny. 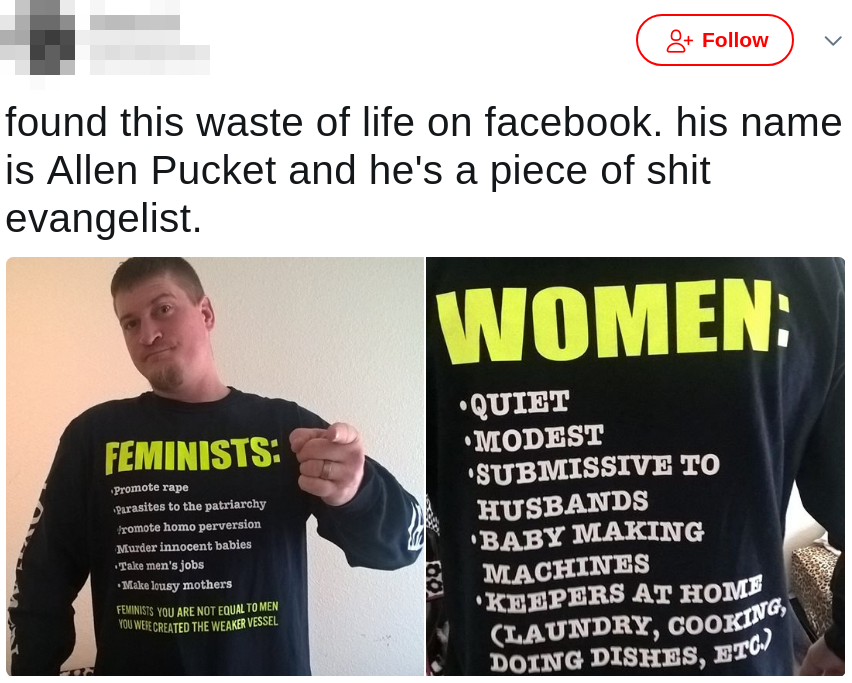 A twitter user comments on Allen Pucket’s overt misogyny. 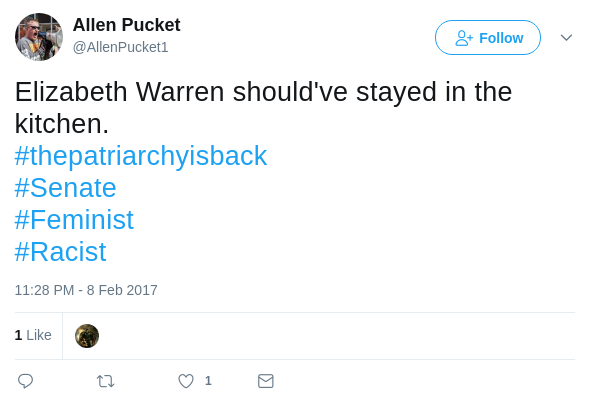 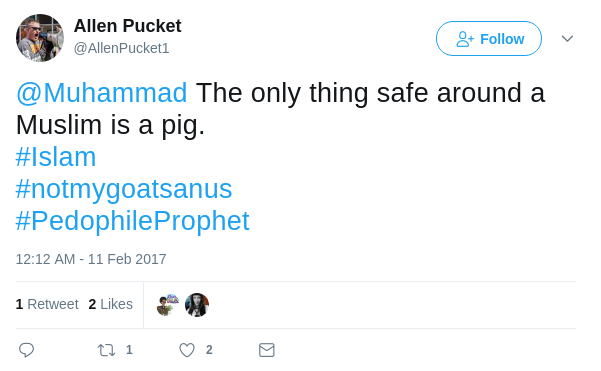 On January 29th, 2017, Pucket’s small circle of bigots made headlines when Grant Chisholm was knocked out by a good samaritan after the preachers had spent hours antagonizing and assaulting people who had assembled at Portland airport to confront the implementation of Trump’s racist Immigration ban. The preachers attempted to exploit this coverage to paint themselves as aggrieved victims of intolerant leftists, but this strategy hit a stumbling block when footage emerged of them harassing and threatening the Spanish-speaking congregation of St. Peter Catholic church mere hours before the airport incident. As a result, hundreds of Portlanders came out to St. Peter Catholic Church the following Sunday to show their support for the congregation, and put their bodies between the parishioners and the aggressions of Pucket and company.

Joey Gibson was also present at the airport attempting to “trigger” demonstrators, but his interventions were limited to extremely weak provocations in an awkward man-on-the-street style. But Gibson and Pucket would soon join forces. Along with others from the American Freedom Warriors such as David Fry and John Beavers, Gibson and Pucket traveled to Berkeley, California on April 15, 2017 to stand shoulder-to-shoulder with avowed neo-nazis, white nationalists, and white supremacists as they attacked activists and anti-fascist community organizers.

An article by Northern California Anti-Racist Action noted that on April 15th Gibson and company were working in concert with neo-nazis affiliated with the “DIY Division” organization: “Robert Boman who was actively attacking people got a face full of pepper spray. He was quickly ushered off to safety by Joey Gibson aka the leader of Patriot Prayer based out of Washington.”

Allen Pucket can also be seen in multiple videos from April 15th attacking activists, kicking them while they are lying on the ground, and fighting alongside white supremacists and neo-nazis such as Identity Europa’s Nathan Damigo.

The Street Preachers, and Pucket in particular, swiftly became fixtures at Joey Gibson’s events after April 15th, and were even featured guests at his June 4th rally. That rally featured anti-semitic and white nationalist keynote speakers and took place mere days after Jeremy Christian, a white supremacist who attended Gibson’s April 29th event, allegedly murdered two people and nearly killed a third who had interrupted his Islamophobic hate speech and threats directed at two young women on a MAX train.

Allen Pucket and his street preacher disciples are also well-known for constant use of the same kind of violent Islamophobic hate speech as Jeremy Christian. The graphic Joey posted to advertise their appearance on June 4th did not shy away from this fact, but rather seemed to advertise that such hateful rhetoric is welcome at Patriot Prayer events. 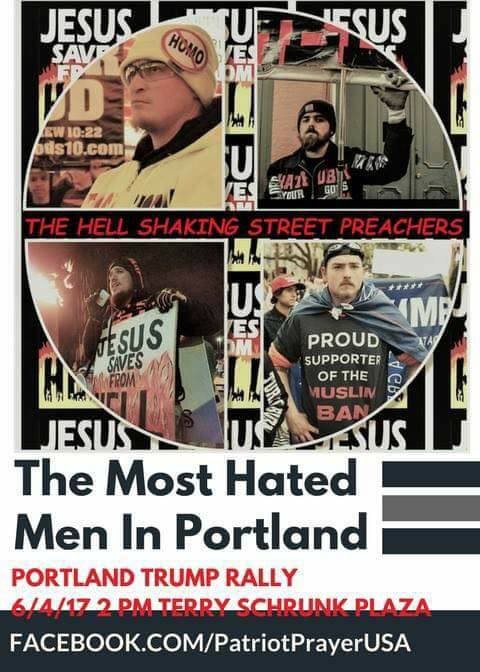 Shortly after the June 4th rally, Joey Gibson also accompanied Allen Pucket and the Street Preachers to the Portland Pride 2017 parade and celebration. Joey Gibson acted as “security” for the preachers while they berated, menaced, and attempted to dehumanize participants in the event. Notably this came mere weeks after Joey’s token invitation of Amber Cummings to one of his events– his so-called “proof” that he could not possibly be homophobic, immediately erased by physical support for homophobic hatred. 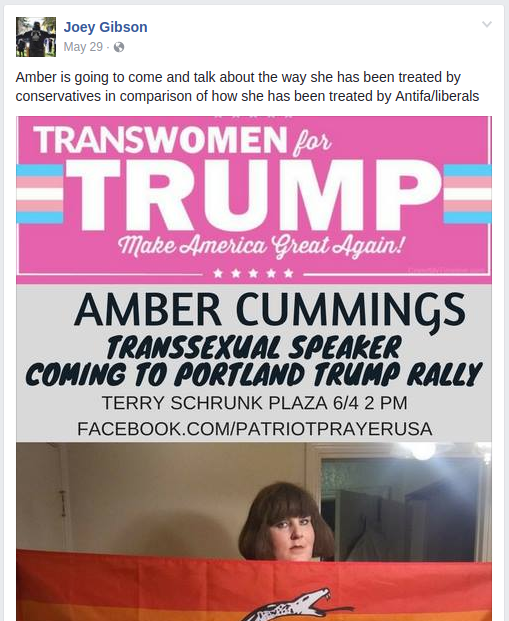 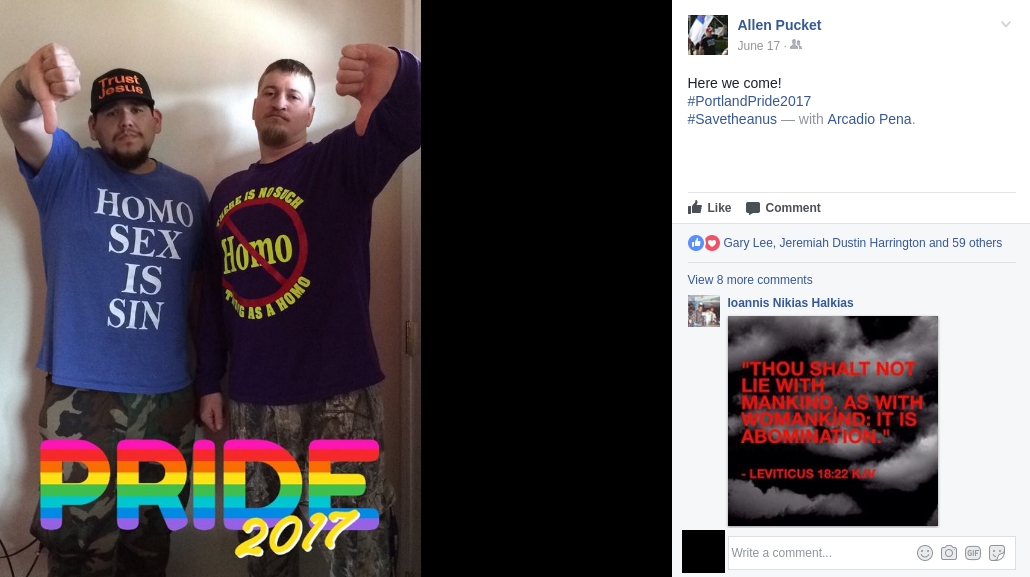 Homophobic facebook post by Allen Pucket and Arcadio Pena before they traveled with Joey Gibson to harass and incite violence against participants in Portland Pride 2017. 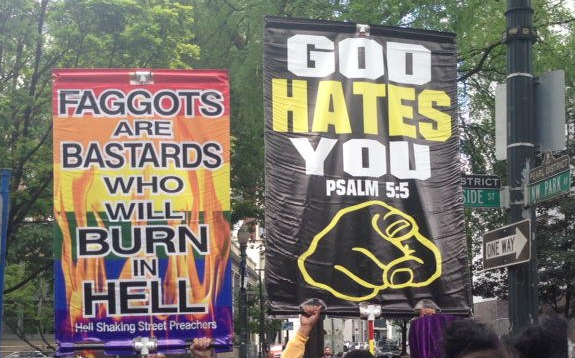 Homophobic signs carried by Allen Pucket and his followers with Joey Gibson at the Portland Pride parade.

A Turn Toward Overt Fascism

More recently, changes have been observed in Allen Pucket’s rhetoric. As we have documented for months now, every rally Joey Gibson has organized in the Portland area has been attended by neo-nazis, white nationalists, and other white supremacists who are attempting to recruit and organize. Whether Pucket always was one of these white supremacists but he merely hid his identification, or whether his politics radicalized through exposure to racist ideologies, we cannot say for sure. However, the fact is that in the company of the white supremacist organizing which Joey Gibson facilitates, Allen Pucket now also openly self-identifies as a white nationalist. 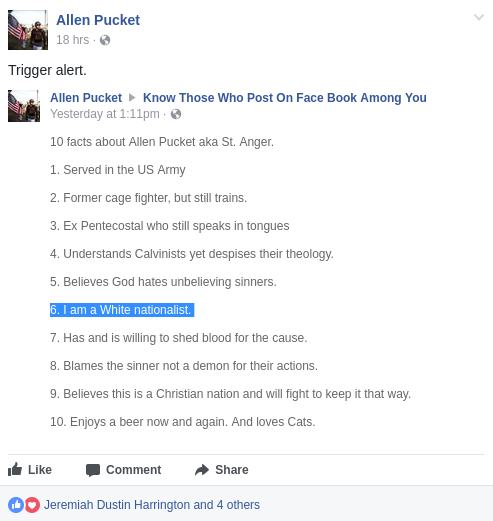 Thanks to Patriot Prayer events and forums, Allen Pucket’s newfound neo-nazi associates are quickly and successfully providing him with racist talking points which have their roots in the overtly fascist “Christian Identity” and “Church of the Creator” movements of the 20th century. 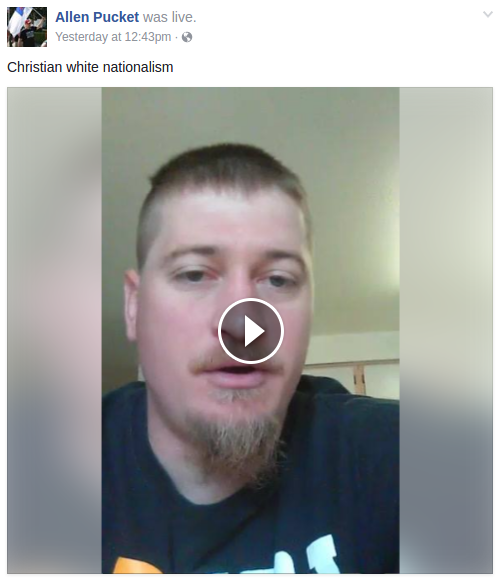 In the screenshot below, we see Allen Pucket directly reciting a slogan about “white genocide” which appeared on signs held by neo-nazis who attended Joey Gibson’s June 4th rally. White Genocide is a set of talking points which correspond with a racist conspiracy theory conceived of in its modern form by David Lane. It co-opts the history of fascist-led mass murder in the hopes of rallying racists to block natural shifts in population demographics. Throughout history, groups of people have been systematically exterminated based on their perceived ethnicity. However, “the white race” is not an ethnicity, but a socially constructed racial class that is becoming less distinct as the population naturally changes over time, and as societal bigotries become diminished. Racist proponents of White Genocide theories believe that immigration, miscegenation, and integration are a Jewish conspiracy intended to replace and eliminate white racial purity. This conspiracy theory was also enunciated in Nazi Germany in pamphlets written for Werner Fiedler’s “Research Department for the Jewish Question.” 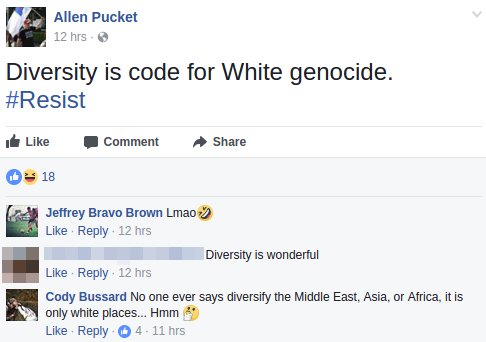 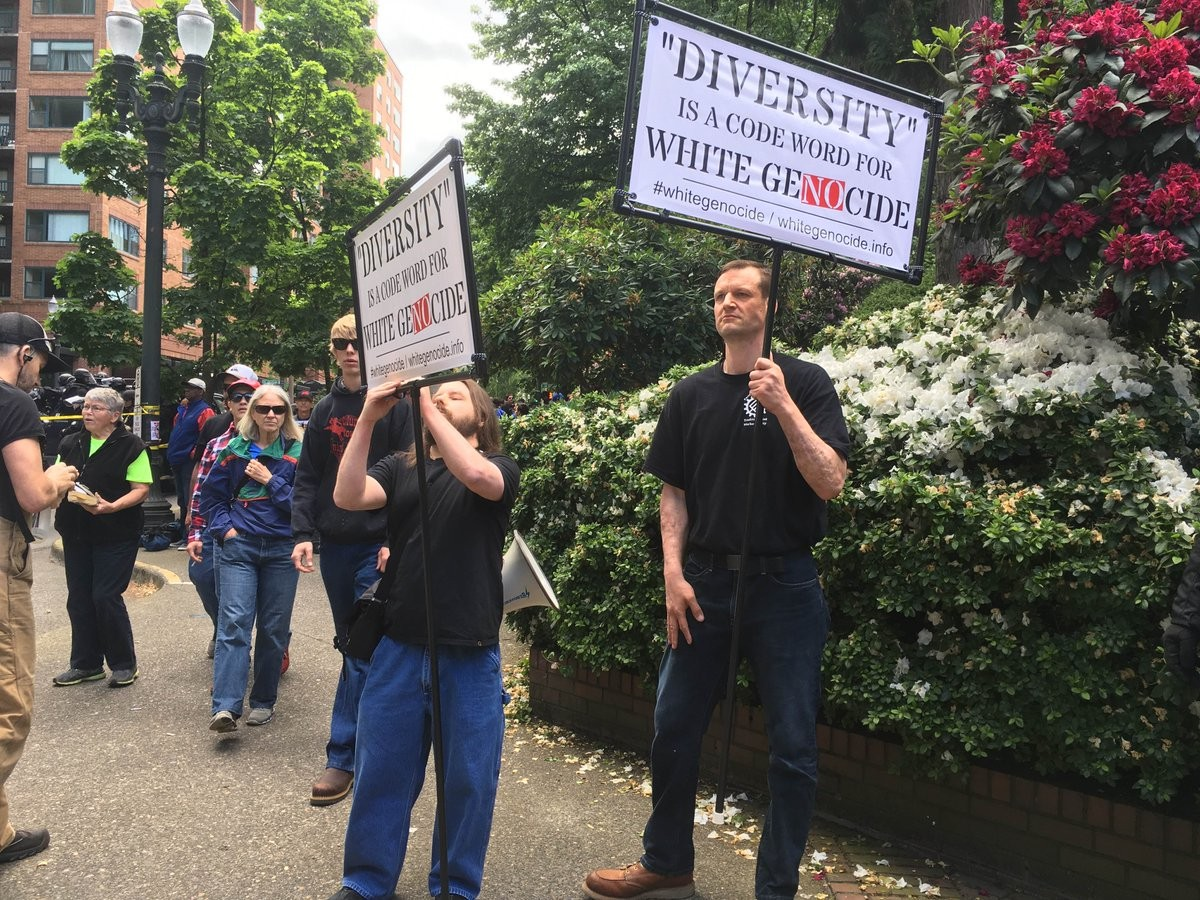 Two participants in Joey Gibson’s 6⁄4 rally display racist “white genocide” signs. They are both wearing shirts which bear the logo of the neo-nazi “Traditionalist Worker Party.”

The mutual support which flows between the Street Preachers and American Freedom Warriors provides Pucket the leverage to further protect white supremacists, with the direct help of Joey Gibson. In the image below, Allen Pucket demands and receives a promise from Joey Gibson that Patriot Prayer will defend the violent white supremacist organization Identity Europa’s right to march at his August 6th rally. 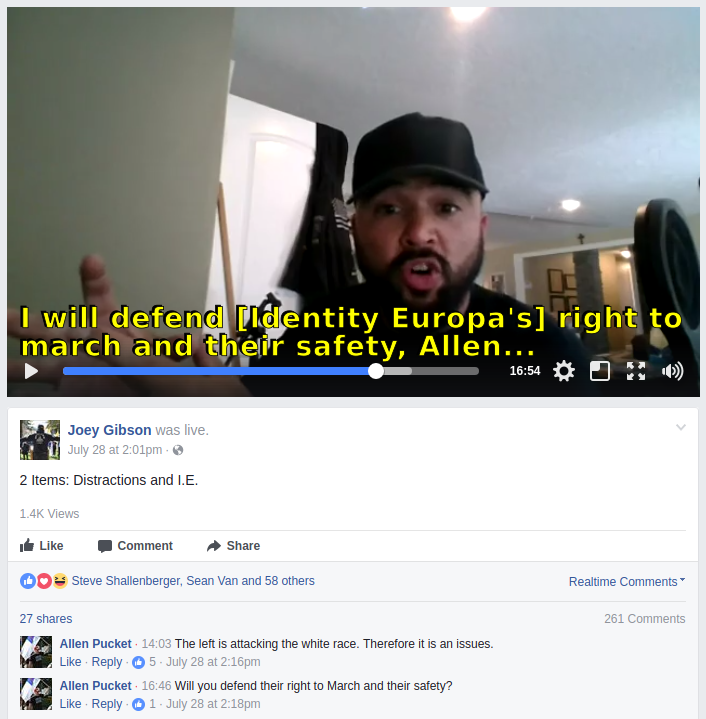 Jake Ott, the regional coordinator for Identity Europa, and Allen Pucket are ideological allies, as is shown below via Ott’s comments on one of Pucket’s Facebook posts. 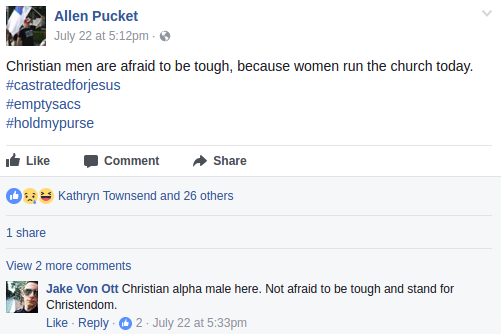 Through positioning his group as “anti-antifa”, Joey Gibson has allowed himself to become pro-fascist. He supports, defends, and encourages white nationalists like Allen Pucket and Jake Ott, as he threatens anti-fascist activists. 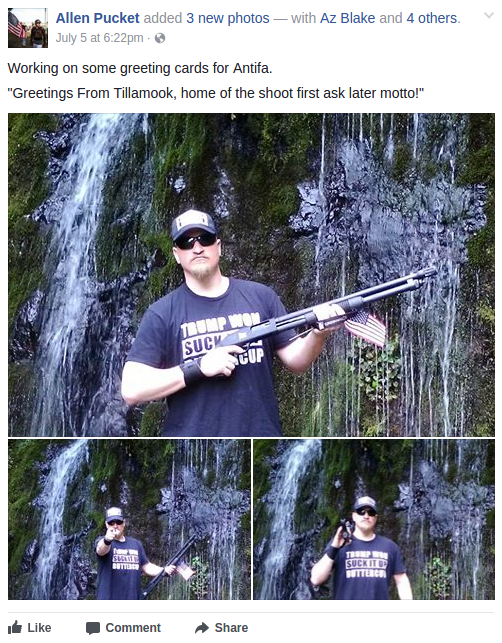 As long as self-identified “patriots” continue to support white supremacists, we will see more of them gradually adopt the language and murderous practices of fascism. Rose City Antifa will continue to defend our community against racist and nationalist threats. Join us in fighting against this fascist creep on August 6th!