While we hate saying “we told you so” when it comes to White Supremacist organizing, Rose City Antifa and other community groups warned that White Supremacists were using the 4/29 “Free Speech” rally organized by Joey Gibson as a cover to organize in public, and they did.

Before April 29th, activists warned that the Hell Shaking Street Preachers, a group of local violent bigots that travel the country attempting to kick in the heads of protesters, including members Pucket Allen, Arcadio Pena, Blake Sheely, and Quincy Anatello would be there. But for those hairsplitters that refuse to be upset by anything less than swastika-brandishing, “real” Nazis, we are sorry to report that at least four non-apologetic White Supremacists were in attendance, and thanks to Oregon III% “security,” they had the freedom to pose with Mayor Wheeler for this jolly photo opportunity. 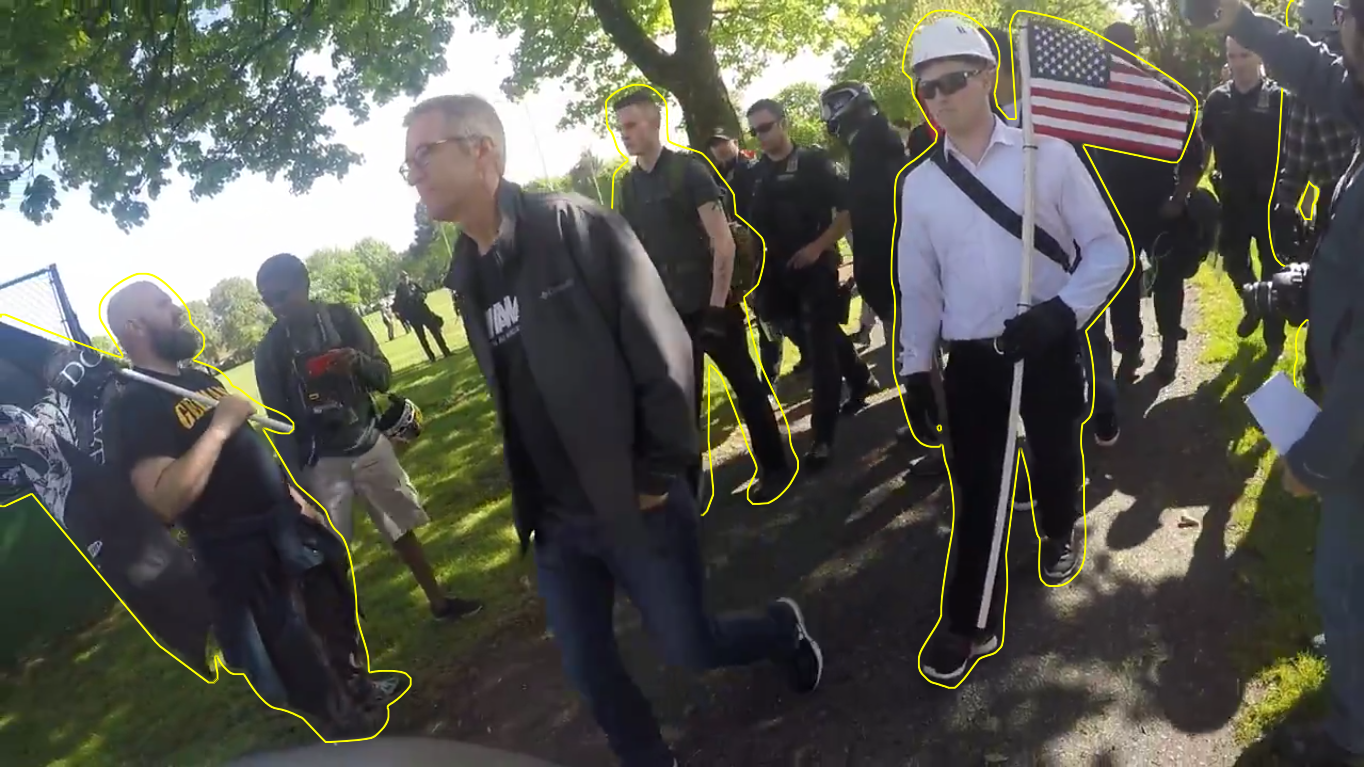 Now Gibson has scheduled another rally for June 4, in downtown Portland. Before that event, it would be good for people to familiarize themselves with some of these local racists. In a Facebook video posted May 19, Gibson claimed to disavow the Nazis that attend his rallies, and called on his followers to find them and kick them out. However, Gibson is himself friends with many of those Nazis on his Facebook, and they follow his Patriot Prayer page. And not even 24 hours after posting the video, far-right bigots were already commenting on the video, claiming that any Nazi that showed up would clearly be antifa in disguise. So once again, it falls upon us to educate the far-right about their own political bedfellows.

Here are those White Supremacists individually. Most of their real names are unknown, but they are all local to the Oregon I-5 Corridor area. If you have any further information about their names, locations, places of employment, or activities, we encourage you to email Rose City Antifa.

It should also be noted that there were a number of open white nationalists in the crowd, including one wearing a ‘Germany’ shirt who was enthusiastically ranting about “white genocide” in South Africa and his desire to have all white people in South Africa move to America because Black people, he said, are ‘naturally cannibals.’”

“Germany” was seen at the 4/29 rally, chatting amicably with other alt-right attendees. 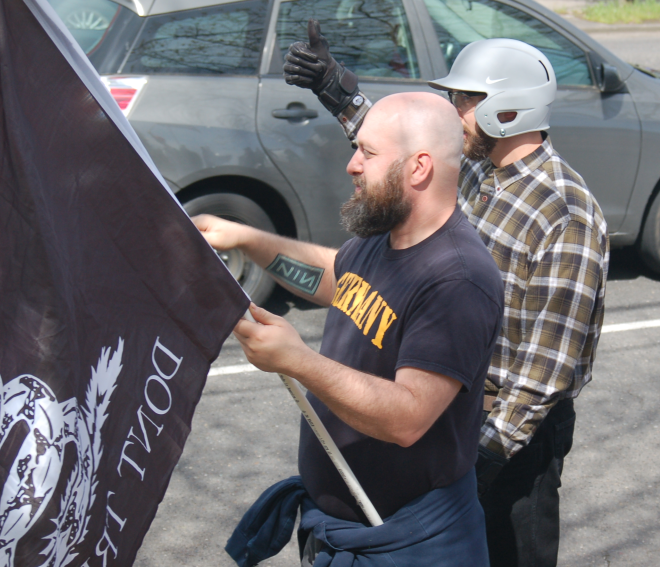 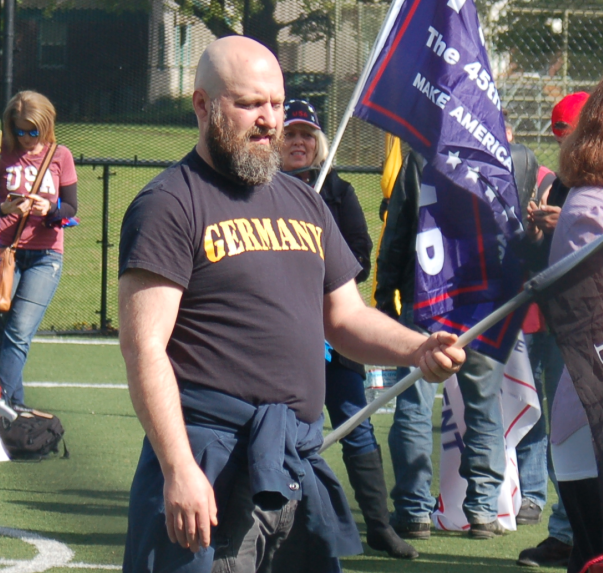 For the blissfully uninitiated, “goy” or “goyim” is alt-right slang for non-Jewish people (appropriated from the Jewish word), used by racists to identify each other covertly. And if we needed any more proof that this slang is linked to unabashed Nazi-worshippers, this man we’ve nicknamed “Goy Helmet” provides an object example. He was forced to remove his “parteiadler” Nazi pin by Trump supporters, as that was apparently a little too obvious even for them. But because his “goy” helmet was a little more obscure, he was allowed to continue wearing that through the protest, marching alongside his other White Supremacist buddies. “Goy Helmet” has been seen at a number of pro-Trump events in the Portland metro area. 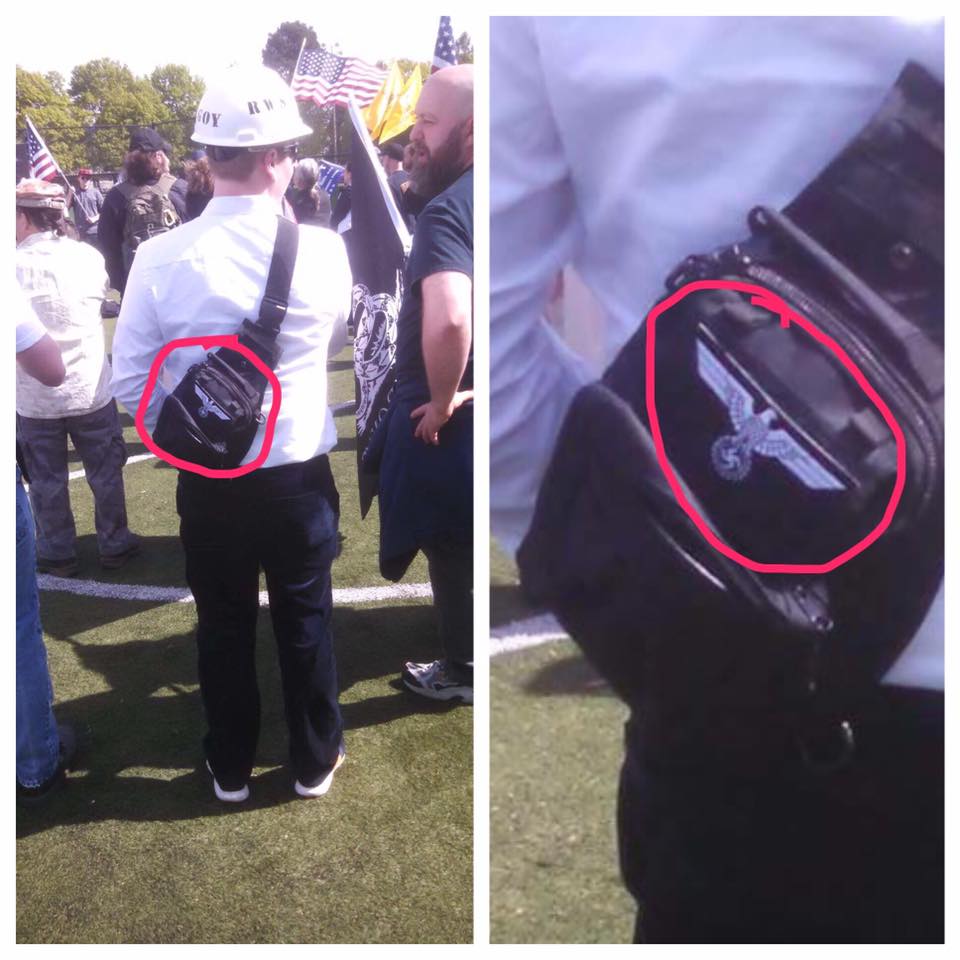 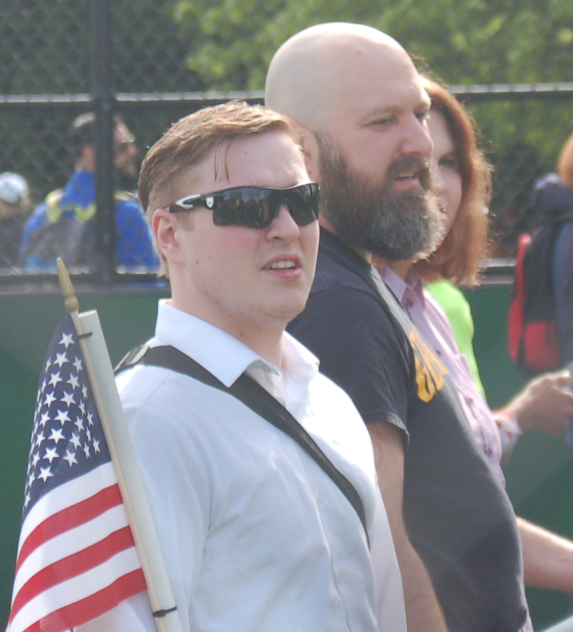 This fellow, who has previously self-identified as “Chad” to journalists (though this is not likely his real name), was at the 4/29 rally spoiling for a fight, decked out in a baseball helmet and MMA fighting gloves (to protect his delicate Nazi knuckles). But we’ve seen those hands before, sieg heiling with other Nazis at the house of well-known Eugene-area fascist Jimmy Marr on April 24th. He also showed up to the University of Oregon’s campus in Eugene on Hitler’s birthday. 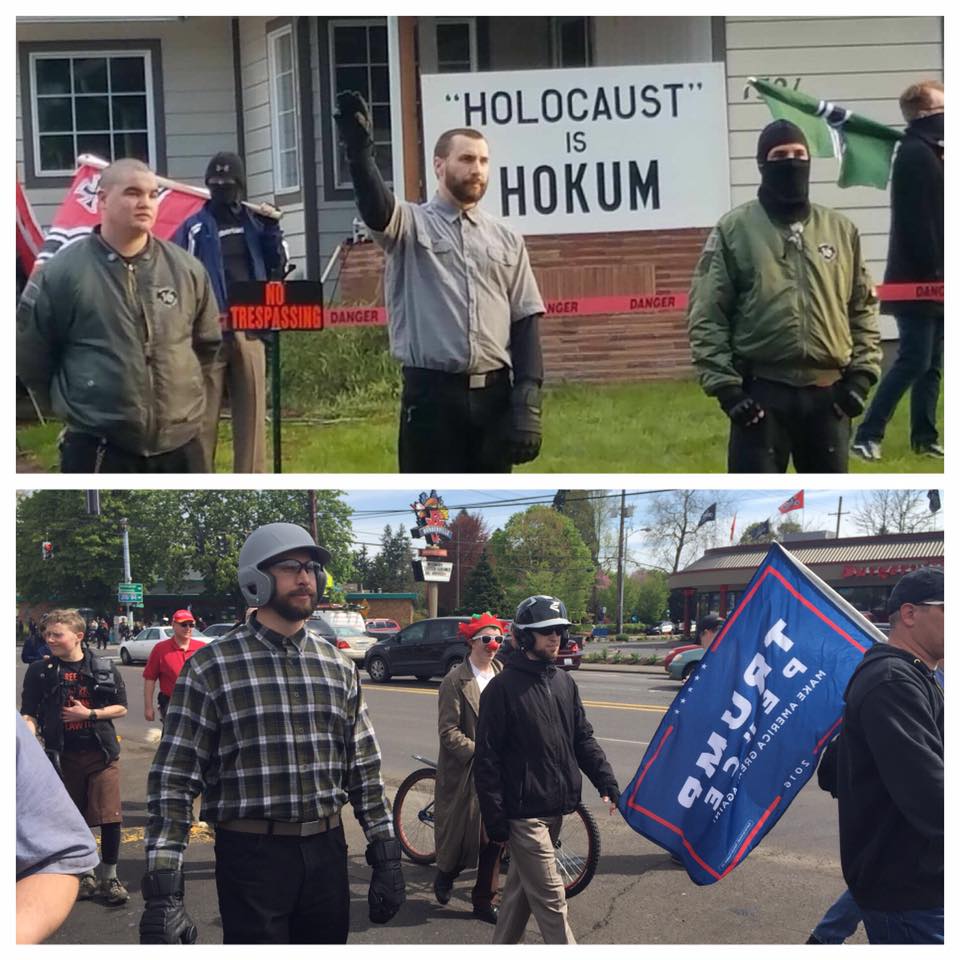 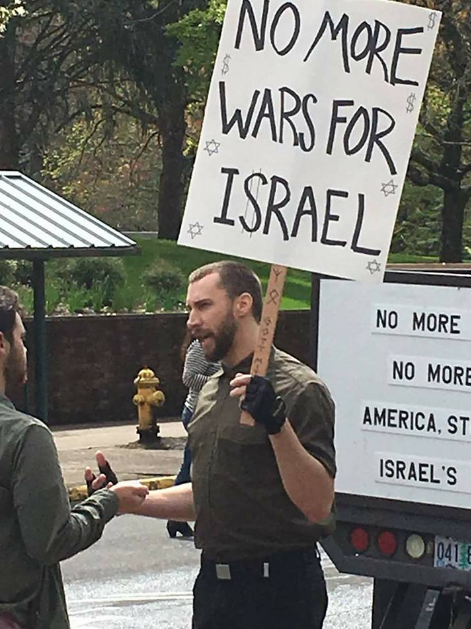 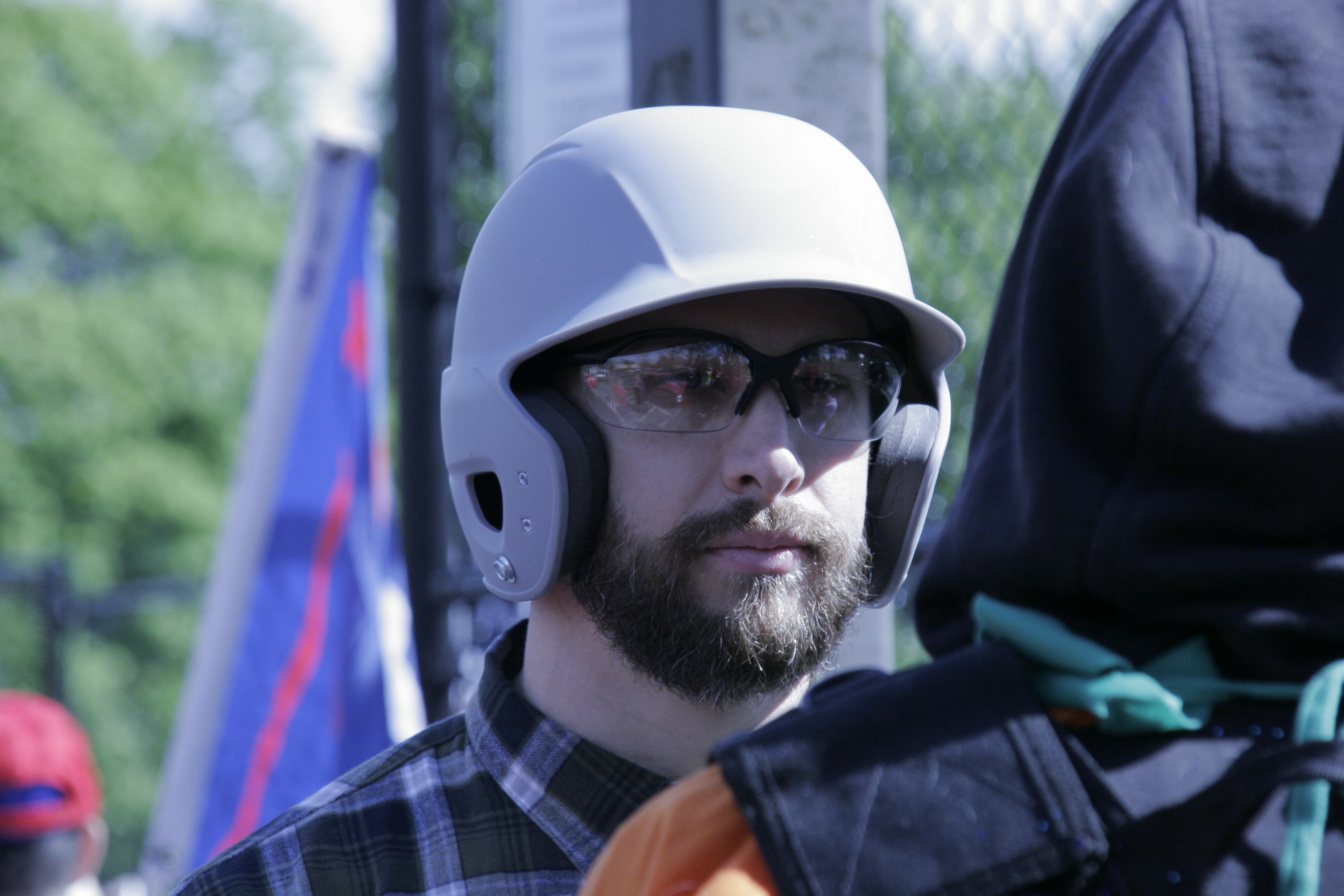 Lastly, we have our one named fellow: Jacob Ott, who also goes by Jake Frank, or Jake Von Ott. Helpfully, Jake posted photos on his own Instagram of him putting up an Identity Europa sticker during the free speech march. (Where, we wonder, were the III% “security” to prevent this dreadful crime of vandalism?) Identity Europa is a group started by felon Nathan Damigo that attempts to rally White Supremacists on college campuses. Jake’s social media profiles are also filled with violent rhetoric, including posing with an AK-47 and captioning it “my Muslim Refugee policy,” and is known to have a number of White Supremacist tattoos. 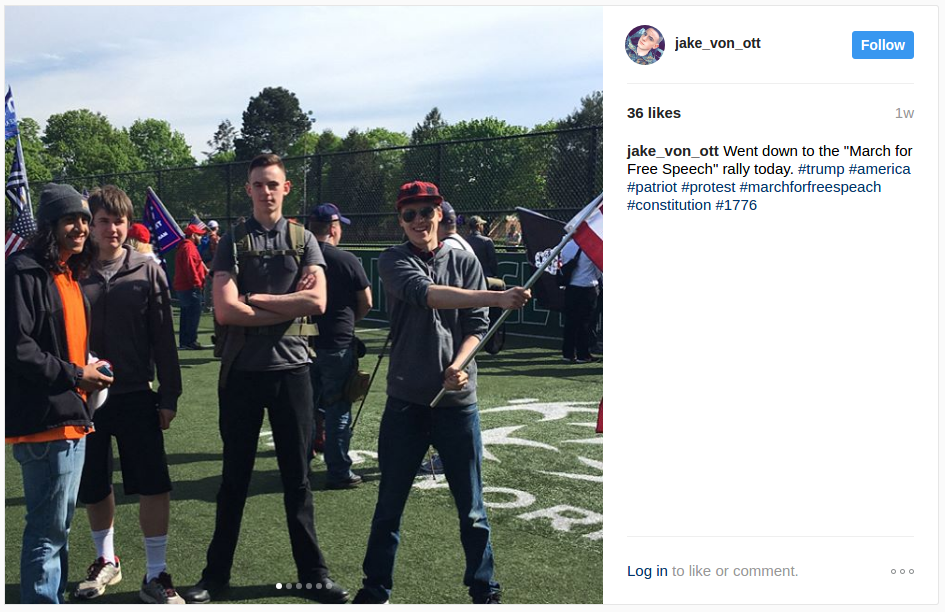 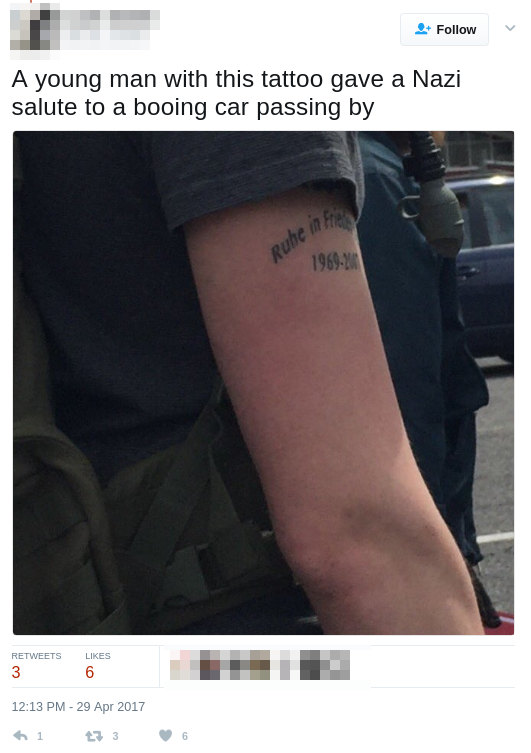 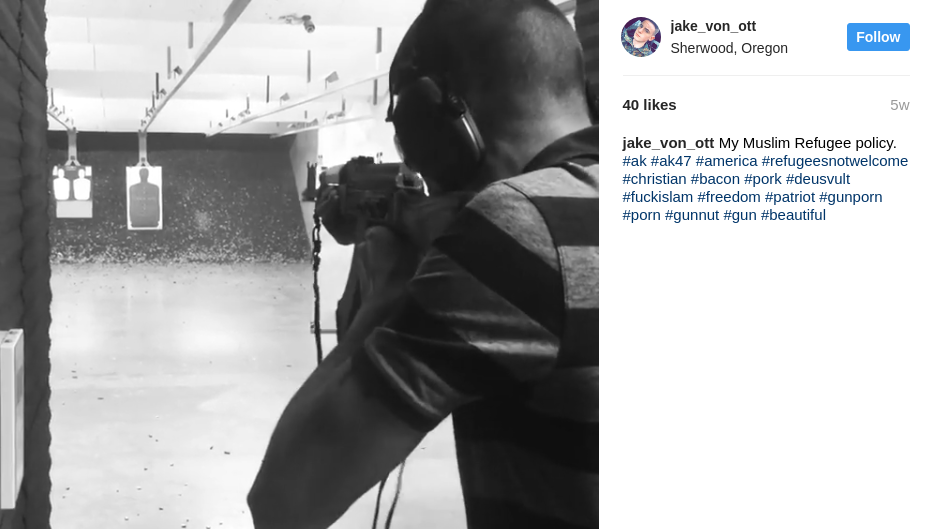 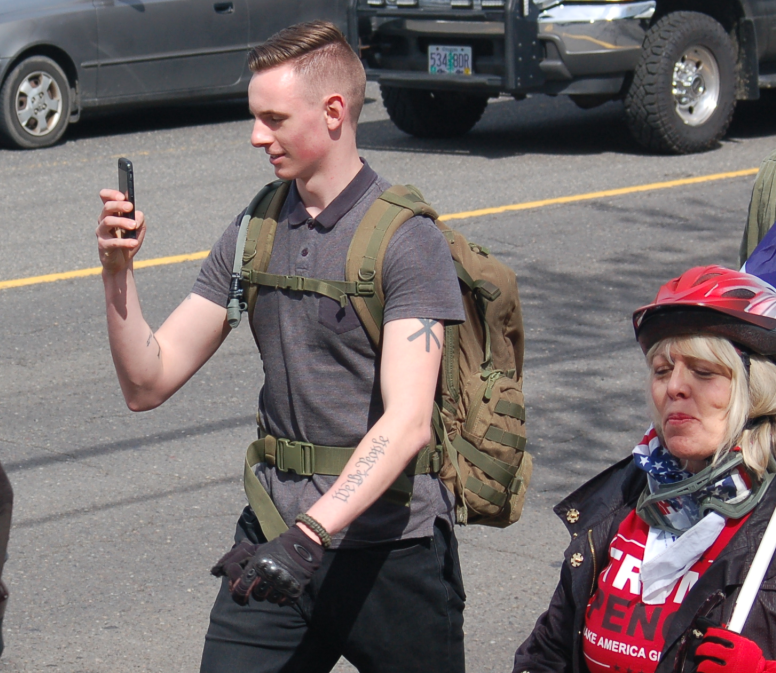 Remove White Supremacy from Your Community

It is the ethical duty of every person, left or right, to prevent White Supremacists from organizing in our community and at events. Trump supporters have proven hesitant to do so in the past, whether through ignorance of their presence, or because they are so hungry for supporters that they don’t care if these violent hatemongers walk among them, as long as they remove visible swastikas that might prove to be bad for media optics. Rose City Antifa will not be convinced by such mediocre gestures. We will continue to track White Supremacists in our community, and take action to prevent their organization, as is expedient.

You can help us by emailing any tips about these four, or any other White Supremacist activity, to fight_them_back.riseup.net.