Update: “John” was identified as Jarl Rockhill by Eugene Antifa and PNW-AWC.

With a legacy of attacking anti-fascist protesters and inviting openly anti-semitic keynote speakers who encourage participants at his rallies to recite neo-nazi slogans, Joey Gibson has been running for cover from angry community members who are tired of having his events draw hate to their cities.

But Gibson is trying one last gambit to promote his franchise of far-right celebrity: martyrdom. His event scheduled for September 10th in downtown Portland has been rebranded several times– first as a “southern pride” event, then an “entire nation” event. Now, Gibson has changed his facade once again, calling for “peaceful warriors who believe in MLK Jr. and Jesus’s philosophy of nonviolent resistance,” and encouraging them to “please contact if you are willing to take a beating.”

A number of people have answered his call, but because Joey Gibson has spent most of this year enabling white supremacist and neo-nazi organizing at his events, he now finds himself in the position of bestowing the mantle of “nonviolent martyr” on violent bigots and neo-nazis.

Nonviolence as a Tactic

Nonviolence has been a fixture of activism for many decades. In certain situations, adopting a strict policy of nonviolence reinforces an ethical critique of the issue being protested. For example, if protesters are trying to draw attention to the violence of the police, sitting still while the police pepper spray peaceful protesters sends a powerful message. In the Civil Rights Era, nonviolent protest drew attention to the inherent violence of white supremacy, whether substantiated by the police, the Klan, or every day white people who harassed protesters mercilessly. If you are seeking justice, nonviolence can be a powerful tool, when it demonstrates the inherent injustice being protested.

However, for Gibson, nonviolence could never provide an ethical demonstration. If your movement is inherently violent, and for one event you display less-violent behavior, that proves nothing. It is as if a police officer, accused of police brutality, suddenly decides one day to walk around in uniform without a gun, as a dedication to “nonviolence.” That doesn’t make them any less of a police officer. And it certainly doesn’t erase the charge of police brutality. All it does is serve as a transparent misdirection. Justice occurs when the overall conditions that lead to violence are altered. Gibson and his far-right events are conditions bringing violent white supremacists into Portland, and until that changes, it doesn’t matter if Gibson carries an umbrella, rides a unicycle, or stands on his head.

Kyle Chapman, aka “based stickman,” who earned that moniker by hitting activists with a stick in Berkeley, attempts to hop on the “nonviolence” bandwagon.

The Fake “Nonviolent” Activists of the Far-Right

Gibson has always claimed that his events are peaceful. Given that they have decidedly not been peaceful, it defies belief that suddenly, they will be. These events attract a number of far-right groups that are proud to place violence front-and-center in their ideology. That is the reason that they turn out violent.

The American Freedom Warriors, Gibson’s own group of street brawlers, have traveled across the country to fight anti-fascist activists, from Berkeley on April 15th, to New Orleans on May 7th, to New York on May 29th. Several have been arrested for fighting at protests, including Tiny Toese, Gibson’s personal bodyguard, who is currently on the lam. A “failure to appear” warrant was issued because Toese failed to face a charge stemming from Gibson’s August 6th event at the Portland waterfront. The very name of the group, “Warriors,” shows just how ridiculous Gibson’s claim of nonviolence is.

The “Hell Shaking Street Preachers,” who have been at every one of Gibson’s events, and who Gibson himself has worked security for as they harassed attendees of Portland Pride, often attack activists. Allen Pucket, one of the street preachers and a self-described white nationalist, has himself predicted that “bloodshed” will occur at this so-called “nonviolent” event.

The III% militia, who have done security for Gibson’s events, takes its name from their belief that only 3% of Americans took up arms during the revolution. They see themselves as the inheritors of that role– hence, the opposite of nonviolent. They have carried out their interpretation of that mission by protecting neo-nazis and Klan members at patriot rallies.

The Proud Boys, a so-called “fraternal organization” that prides itself on getting in street brawls with left-wing protesters, has little in the way of an actual mission outside of self-described “western chauvinism,” which has encouraged many fascists and racists to join the group.

And lastly, but certainly most seriously, we have the various fascist groups that have taken advantage of these far-right events to organize in public, such as Identity Europa, Cascade Legion, the Traditionalist Workers’ Party, and more.

Fascism and white supremacist racism are violent ideologies. They believe in dehumanizing subsets of the human species and perpetrating violence against them, in order to increase their own political power. There is no such thing as a peaceful fascist, because it is only a matter of time until those violent ideas are translated to reality. The SPLC has tracked instances of recent hate crimes and determined that members of the neo-nazi website Stormfront have been responsible for the murders of nearly 100 people in the last five years. How could a mere website, or a rally be dangerous? If that website or rally promote ideas which are in themselves violent, which in turn enables their participants to go out and commit violence. This isn’t merely speculation, but our own tragic history.

It does not matter one iota whether fascist groups decide to be “nonviolent” for the course of one event. The National Socialist Movement could have a bake sale– but that would not change the fact that their group seeks to eradicate certain ethnicities from the face of the earth by mass murder. Joey could walk a basket of canned goods into a hurricane naked, but if he allows white supremacists to walk with him, then he is enabling their entry in whatever community he decides to enter.

Among the people who have volunteered themselves to “take a beating” in this spectacular appropriation of the tactic of nonviolence are two Proud Boys: Anthony Edward Bell and Aaron Laigaie of Bellingham, WA. Laigaie and Bell have both been present at several of Joey Gibson’s portland area rallies in recent months, and Laigaie in particular has relished brawling alongside white nationalists and neo-nazis against Portland anti-fascists. 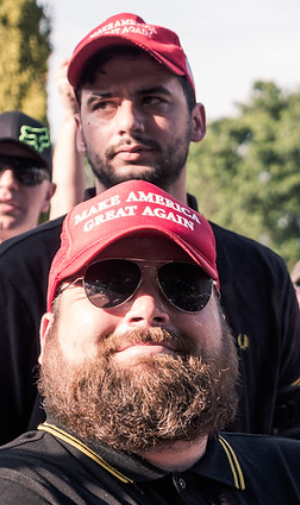 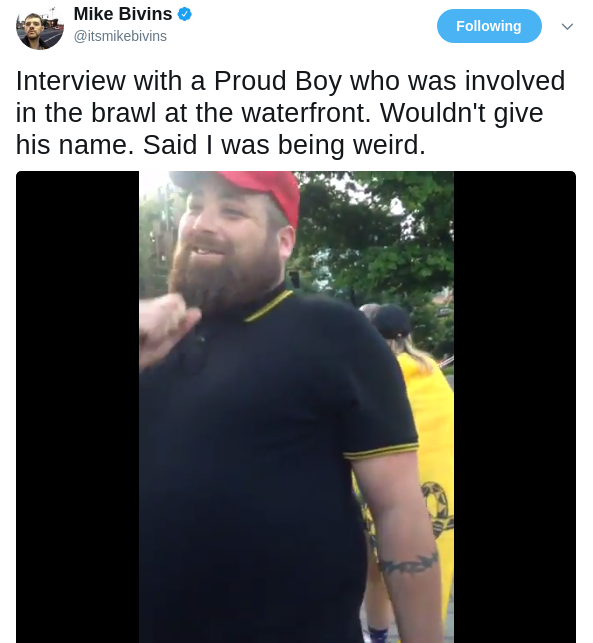 The Proud Boys claim to be “western chauvinists” and, like Patriot Prayer, frequently make facile disavowals of the very racism and fascism which they nonetheless enable and defend. Gavin McInnes, the creator of the Proud Boys, has himself stated, “I cannot recommend violence enough. It is a really effective way to solve problems.” One of the ways that members advance in the group’s hierarchy, is explicitly by getting into a fight with anti-fascist activists. McInnes worked closely with neo-nazi Mike Peinovich on organization for the “Unite the Right” rally in Charlottesville, at which an anti-fascist activist was murdered, and many injured. The Proud Boys also count among their membership Jason Kessler, one of the main architects of the Charlottesville event. 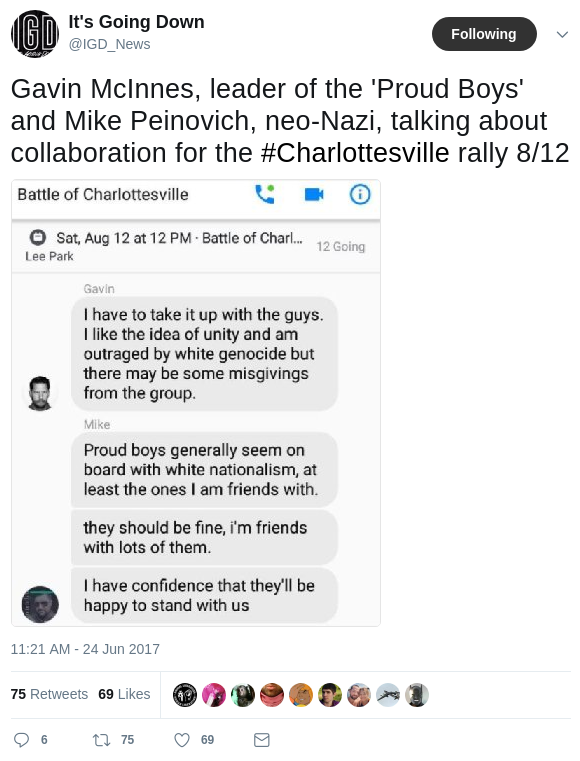 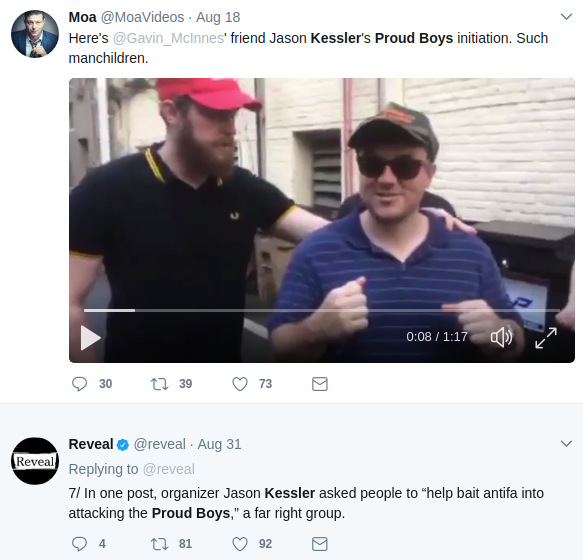 (top) Jason Kessler’s “Proud Boy” induction video, (bottom) a snapshot of reporting on the general strategy of the far right to portray themselves as “victims” while organizing for racist violence.

Also among other volunteers for Joey’s ploy are an Identity Europa-affiliated fascist who we will call “Gary Lee,” as well as a local neo-nazi named Thorsson Snyder. Both of these white supremacists have attended many of Joey Gibson’s Portland-area rallies since June 4th, and have frequently been seen in the company of neo-nazi Identity Europa coordinator Jacob Ott. 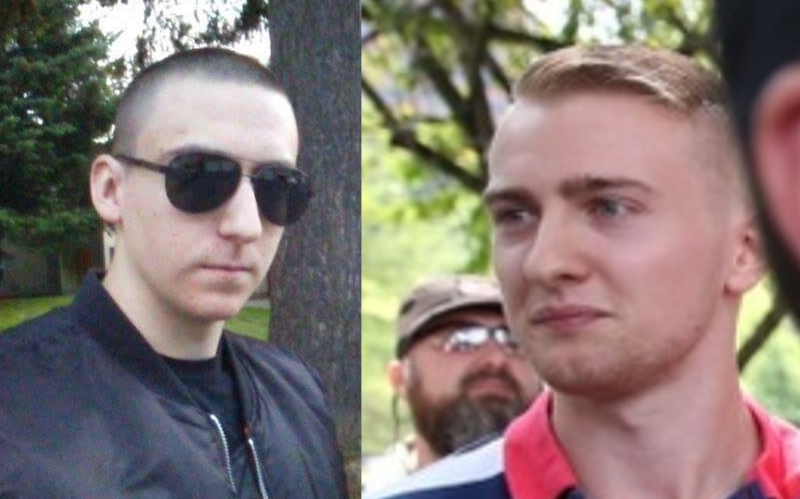 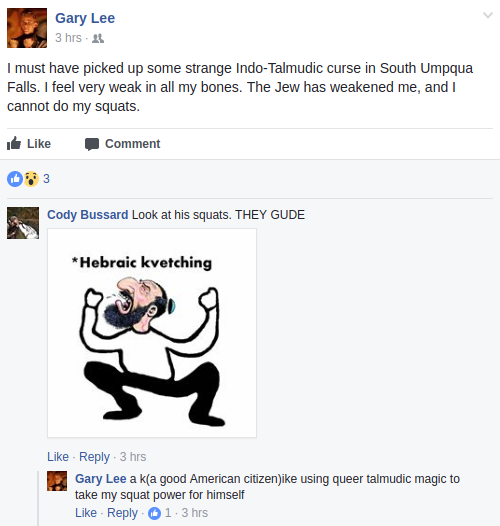 “Gary Lee” telling anti-semitic jokes with his friends on facebook 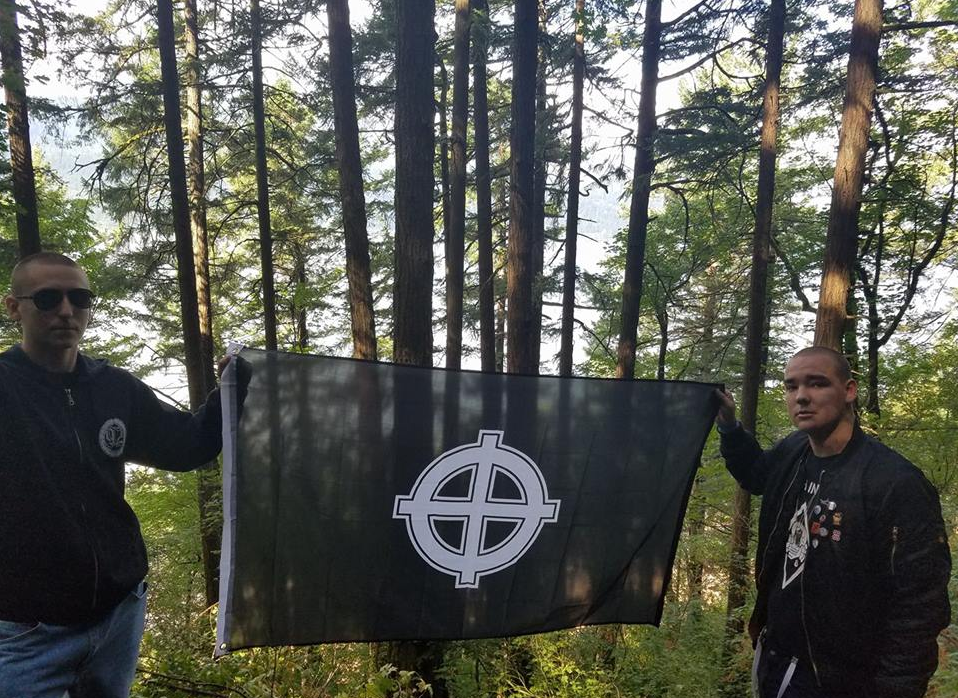 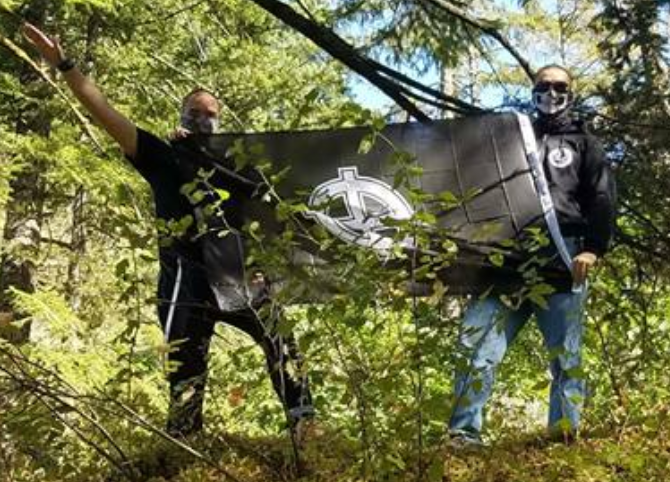 Kyle Broussard shows up to Gibson’s events, claiming to want to “keep the peace.” However, he mixes it up with fascists, and then attacks activists. His “nonviolence” is a hollow shell. 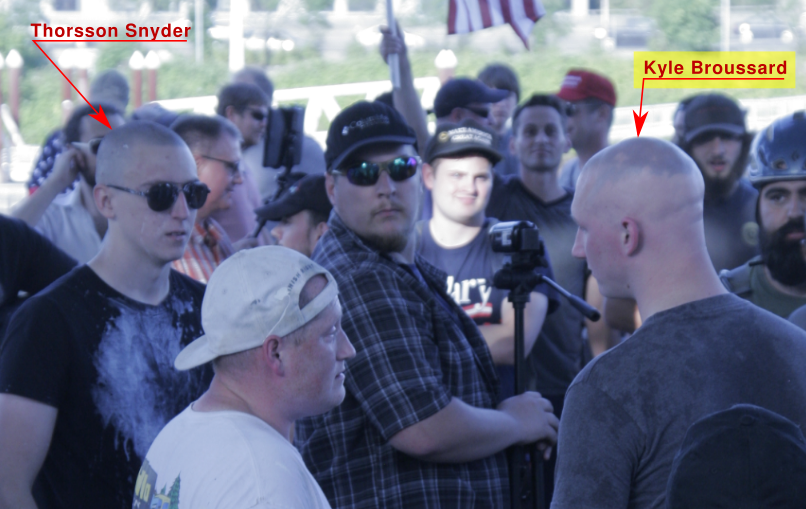 Broussard, on the far right, chats with fascist Thorsson Snyder and other violent right wing brawlers at Joey Gibson’s 6/30 rally. 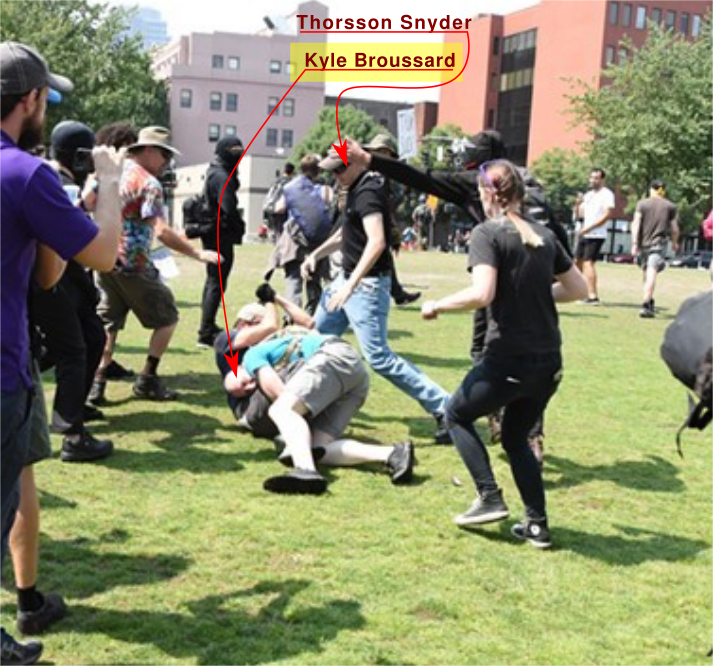 Broussard, center in bright blue shirt and shorts, tackles an activist while Thorsson Snyder kicks him.

A fascist going by the pseudonym of “Mike Gainer” plans on being at Gibson’s event, but unlike some of the others, refuses to be nonviolent, because of course, he believes in a violent ideology that dictates “might makes right.” 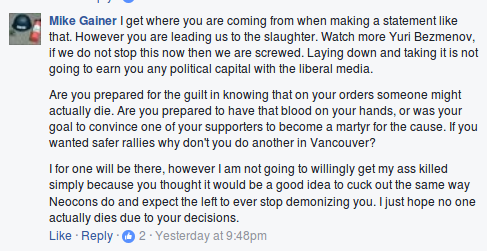 Mike Gainer has been seen at a number of Gibson’s events in the company of fascists, wearing his trademark helmet emblazoned with “RWSS,” which stands for “right wing safety squad,” as well as being a dog whistle for the SS, Hitler’s paramilitary organization. 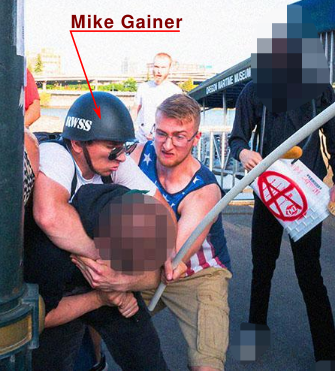 Gainer was seen skulking about a protest against the repeal of DACA in downtown Portland, on September 5th. He was with Jarl Rockhill, who treated the crowd to a roman salute while yelling “white power!” They were quickly chased away by the protesters on scene. 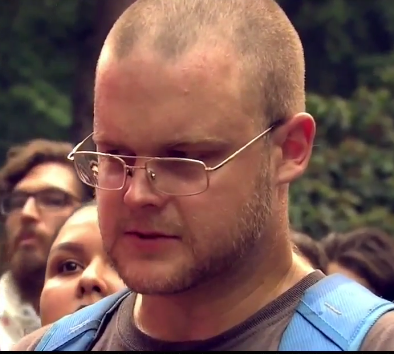 Jarl Rockhill, the fascist who salutes and runs

Other Fascists Seen at Gibson’s Events

Cody Bussard may look like a little babyface, but he has been playing dangerous game, associating with Identity Europa affiliates like Jake Ott, Gary Lee, and Thorsson Snyder. 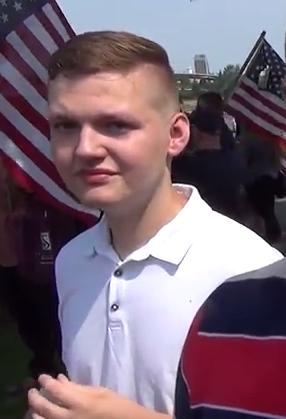 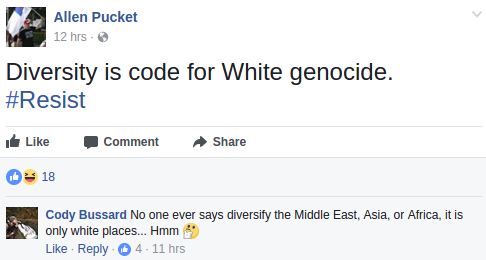 Jake Ott, Identity Europa organizer for Oregon, has been seen at many of Gibson’s rallies, often leading a cohort of other young fascists. We wrote a detailed article documenting Ott’s anti-semitism and fascism, here. 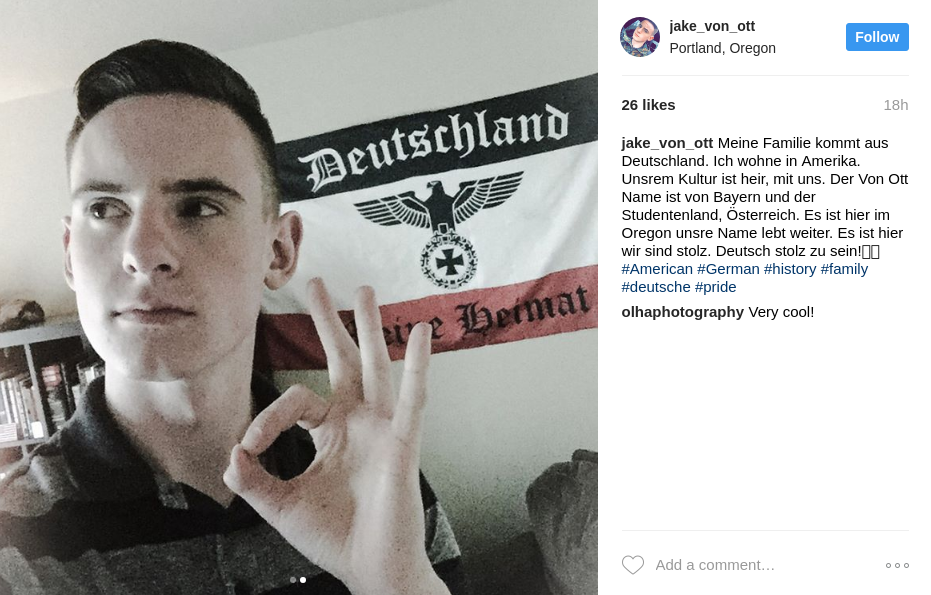 Joey Gibson’s attempt to co-opt the legacy of civil rights struggle to serve the ends of violent bigots and open fascists is transparently opportunistic and disgusting. Portland will not be fooled into accepting white supremacists and their enablers simply because they are wrapping themselves in a transparent cloak of “nonviolence.” Rose City Antifa will continue to actively oppose violent white supremacist and fascist organizing, no matter what form it takes. Join us on September 10th in shutting down Patriot Prayer’s planned rally.

If you have any other information, or real names for the people mentioned in this article, please email us at [email protected].