At the Proud Boys rally in Portland on August 22, 2021, Proud Boy chapter leader Randy Ireland from New York wore a body camera which recorded all of his interactions during the course of the event. He subsequently knocked the camera off of his own body while attempting to help push over a van that Proud Boys had looted and damaged; Ireland abandoned the camera on the ground, where it was later discovered by a passing community member. We are now publishing the footage (over three hours) in its entirety, with a brief guide to the contents of each video.

On August 22, 2021 individuals from a variety of far-right and fascist groups converged on Portland, Oregon to commemorate the previous year’s violent confrontation with antifascists. The event was also “in honor” of Alan Swinney who was arrested for pointing a loaded handgun at antifascists. Swinney has since been convicted and sentenced to 10 years for his actions. The event coordinator stated that “the time for waving flags on a street corner has come to an end” and that the fascists should “rise up and defend their families.” 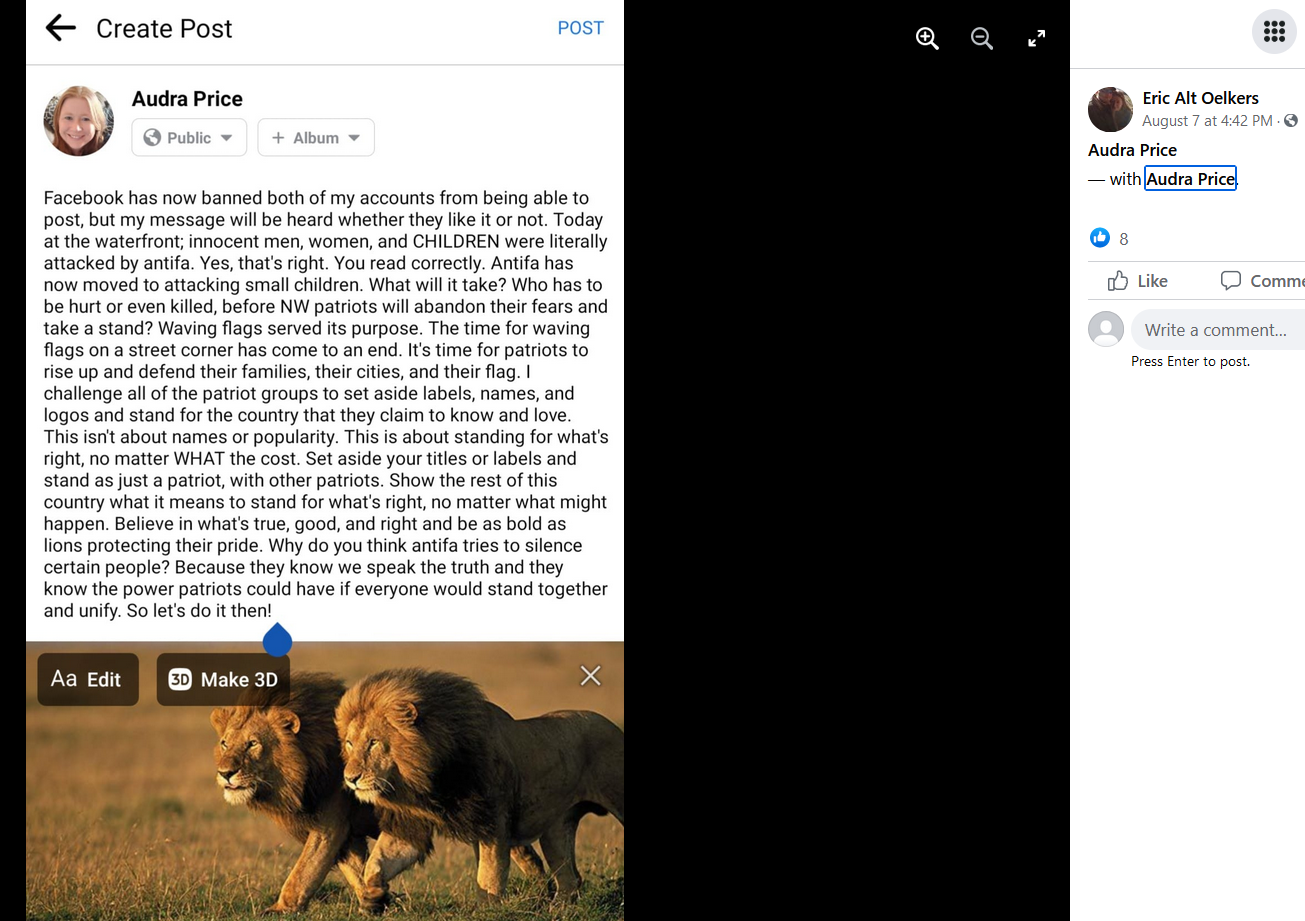 Some went so far as to reference “cleansing” the street.

The event was originally planned by Audra Price of Cops NW but she publicly backed away from the event shortly before it happened - leaving control to local white supremacist grifter Haley Adams. 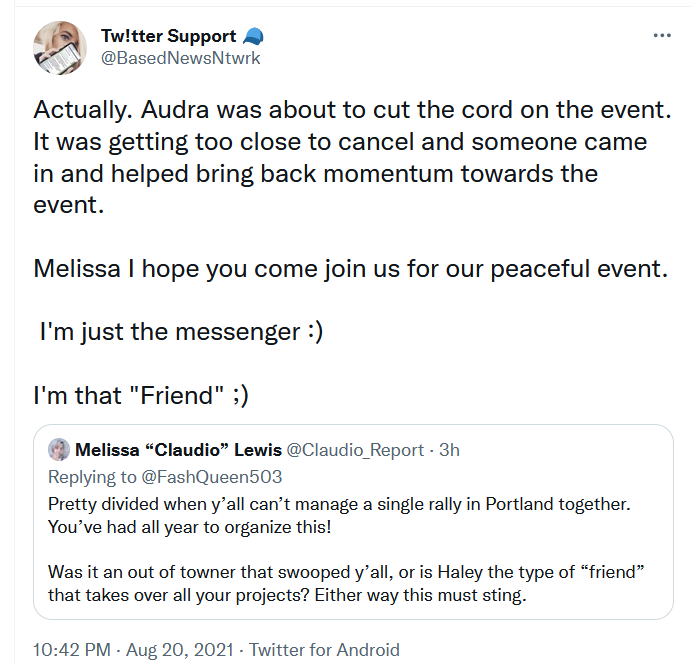 The event was scheduled to be at the Tom McCall Waterfront in downtown Portland but was moved at the last minute to the parking lot of an abandoned K-Mart in the outskirts of Portland’s east side.

Proud Boys from chapters across the country arrived along with dozens of unaffiliated far-right individuals. Attendees confronted community members that counter-protested the event and then swarmed a small group of antifascists that arrived. Members of the far-right assaulted a van of antifascists as well as a truck with a lone individual inside.

Among the attendees was Randy Ireland, a Proud Boy from New York and head of the “Hell Gate Bridge Crew”. Randy wore a body camera that filmed events throughout the entire day. Unfortunately for Randy, the body camera fell off as he joined other Proud Boys in flipping over a van that had been attacked by fascists earlier in the day. This marks the second time in two years that a fascist dropped their body camera for others to find.

0:00-8:30 - Randy gears up in the parking lot, intermittently chatting with a crowd of other local and national Proud Boys including Dan Tooze, and talking to a documentary film crew arranging filming of their activities.

8:30-13:50 - Randy wanders the parking lot with a plastic garbage bag full of lollipops, handing them out to basically anyone who will take one–from fellow Proud Boys, to far-right livestreamers, to Haley Adams and crew, to press nearby covering the event.

13:50-20:00 - Randy lingers in an area of the parking lot containing a small group of press and a collection of far-right media including Robert Zerfing, etc.

00:00-06:50 - Randy walks through the parking lot talking to a few Proud Boys and then lingers near Michael “Vinni” Cuz Isaacs before talking to John Turano aka “Based Spartan”.

11:00-16:30 - Randy interacts with Jen Loh near the stage as she tries to get chalk art started. Avoiding the artwork, Randy continues wandering and passes some other “press” and far-right figures. He interacts briefly with different groupings of Proud Boys during his epic quest to find a bottle of water.

16:30-20:00 - A group of rally attendees with paintball guns walk by Randy as he wanders in the direction of the stage, pausing to talk to other fascist-aligned media like EddieBlock. A small crowd gathers near the stage while other local fascists including Skylor Jernigan and Kerry Hudson stand further away. Tiny Toese opens the ceremony.

00:00-05:25 - Randy hangs out in the crowd near the stage while speakers talk about Antifa being downtown. Tiny speaks, followed by Carl Todd.

05:25-12:00 - Randy gets a beer from the kegs, chatting with a few locals. Phillip Anderson talks in the background as Randy meanders alone in the parking lot. More people join in the chalk art including Randy, who signs his name in chalk and settles any dispute as to the identity of the camera’s owner.

12:00-20:00 - Randy begins his search for Matteo DaGradi, asking several people if they’ve seen him. There’s also a cameo appearance by Miles Douglas Furrow at 12:30 (who will viciously assault the lone passenger in a truck later in the afternoon). Randy wanders from group to group asking where he can find Matteo.

00:00-03:00 - Randy grabs something from his truck, scrubs a beer off local Proud Boys, and walks towards the stage while Tiny introduces Jaimee Franklin (@@sp?) on the stage. Randy continues to wander the parking lot.

03:00-11:50 - John Kuenzi chats with some attendees that look like Boogaloo Boys. Randy follows Kuenzi and chats with him and Kenny Lizardo (Boston Proud Boys).

11:50-20:00 - Randy heads back to the stage while Tiny notes the press from the stage. A group of Proud Boys attempt to hang a banner from the abandoned K-Mart about their “political prisoners”. Randy passes Beny “White” Monjaraz from Southern California, dressed in rainbow tiedye, who will be involved in a number of assaults later in the day. Randy continues his search for Matteo. Phillip Anderson gives an angry interview in the parking lot while a yellow smoke bomb sputters by the stage. Phillip Anderson gives a speech.

07:00-17:20 - Tiny introduces Robert Zerfing who starts to give a speech as Randy walks away to admire the banner. He watches the rest of Zerfing’s speech.

00:00-06:55 - Tiny rambles a bit longer and then introduces Randy who gives a speech about political prisoners.

06:55-17:35 - Tiny kills time on stage and introduces the next speaker, David. Randy walks through the parking lot towards a group of Proud Boys and finally finds a drunk Matteo DeGradi. They talk for awhile.

17:38-20:00 Carl Todd, Travis Taylor, Matteo DeGradi, and “Aaron” discuss confronting a small group of antifascists in the area. Randy and Matteo drink more beer while the rest leave the area.

00:00-03:25 - Randy stops at his truck and then talks with a group of Proud Boys before wandering back to the stage area.

03:25-06:55 - Randy walks towards one of the parking lot entrances where a group of rally attendees have congregated. He wanders away towards Kenny Lizardo for another conversation.

06:55-17:35 - John Kuenzi returns to talk with Randy and Kenny. They chat for a long time with Kuenzi talking about the Salem chapter, including details about the vetting process for membership.

17:35-20:00 - They are interrupted by Daryl Grant Murrey who took literature from the antifascist gathering downtown.

00:00-10:40 - Randy, Kenny Lizardo, and John Kuenzi discuss internal operations of the Proud Boy chapters in the PNW. At some point Kuenzi flashes the business card for their chapter’s vetting officer (971-287-1639). Kuenzi mentions that the new recruits want to fight.

10:40-XXXX - People congregate near the perimeter of the event, harrassing a woman that they believe to be an antifascist and state that they can’t walk through the event.

11:45-13:15 - Randy and many other attendees rush towards the parking lot entrance with claims that “black bloc” have arrived. Attendees briefly assault a van at the edge of the parking lot.

13:15-16:20 - Randy follows a number of other individuals to an alley or sidestreet, anticipating a fight. No fight materializes and they wander back to the abandoned van.

16:20-20:00 - Randy observes a number of individuals vandalizing the abandoned van. Members in the crowd aggressively harrass and surround a woman they believe to be Melissa Claudio Lewis. Daryl Grant Murrey admits pepper spraying a woman. Randy goes to the bathroom (don’t worry, nothing is visible).

00:00-07:00 - Randy finishes taking a leak before returning to the abandoned van at the entrance to the parking lot. Tiny lectures a large group about tactics. Randy wanders through the parking lot where one attendee says that the van rolled up and were mouthing off “when one of the guys just walked up and started pepperballing the window”. Randy takes a beer break.

07:00-11:00 - Randy starts to head back to the parking lot entrance where a number of fascists are continuing to vandalize and loot the abandoned van. Randy briefly walks a couple yards down the street towards the sound of conflict before returning to looting Gatorade from the van.

12:40-15:45 - Randy leaves the parking lot to comfort Matteo DaGradi who is suffering from some “organic composition”–more severe than simple pepper spray–that he claims to have been sprayed with. It takes several people to treat him.

15:45-20:00 - Randy returns to the parking lot to adjust his gear. He walks behind a group of local Proud Boys who do their best to ignore Randy.

00:00-03:00 - Randy stands near the stage area where some local Proud Boys can be seen in the background.

03:00-06:00 - An unidentified rally attendee that physically assaulted antifascists walks to the stage, covered in paint. Randy is on a phonecall with someone that warns him about purported antifascists with AR-15s. He discusses street tactics with some of the Proud Boys that fought antifascists moments earlier. Some attendees are urgently calling for everyone to leave.

06:00-08:45 - Randy walks through the parking lot, everyone is packing up quickly and trying to leave. Randy sounds drunk as he tries to warn anyone that will listen to him that antifascists are coming back with “live rounds”.

08:45-09:40 - Tiny initiates the Proud Boys trying to flip the abandoned van. Randy yells instructions that nobody pays attention to. Grunting. The van is flipped over.

Full downloads of the above embedded videos are available through archive.org:

If you have further information about the Proud Boys, or other fascist organizing, please contact us at [email protected].