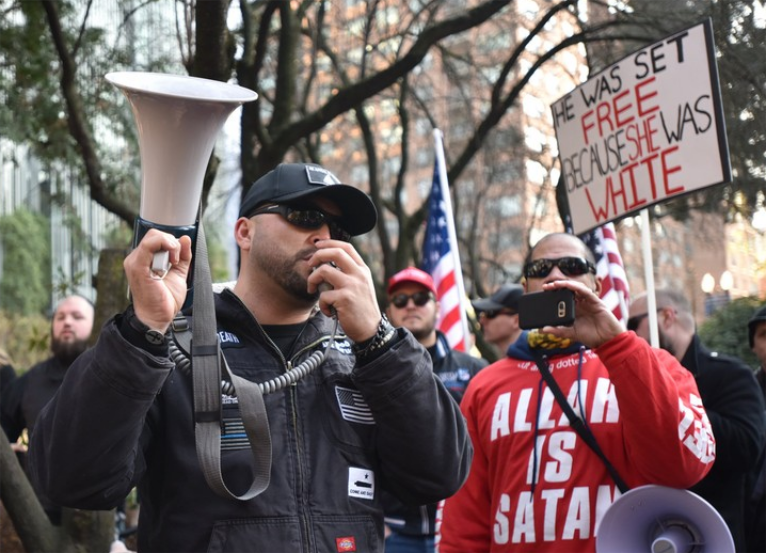 On Thurday February 7, 2019, Portland City Council passed a resolution acknowledging Portland’s grotesque and ongoing history of white supremacy and racism, and “reaffirm[ing] its commitment to continue, in collaboration with Portlanders, pursuing policies and directing bureaus in the next year and beyond to ensure civil and human rights to all individuals.” The resolution also states that “the city of Portland is proud to stand united against those who propagate hate and incite fear and violence in our community.“

Many Portland residents would appreciate not just an empty statement, but actual accountability for the police’s actions when they assaulted anti-fascist activists on August 4th, as well as the police’s subsequent lies and ridicule against Portlanders who had assembled to oppose the fascist provocations and violence which the City Council is claiming to “stand united against.”

But additionally, Rose City Antifa would recommend that the city begin by cleaning house by removing certain bigots and racists currently working for the City of Portland.

The saga of Nazi Cop Mark Kruger is well-known at this point, as is the City of Portland’s lack of accountability for his construction of a Nazi shrine in a Portland city park. Kruger would be an obvious first choice if the city were interested in backing up its resolution with concrete changes.

But additionally, it has recently come to the attention of Rose City Antifa that two other bigots are currently employed by the city, who are both actively involved in organizing geared toward enabling racism, white supremacy, homophobia, misogyny, and hateful violence: Quincy Lee Franklin, and Gregory Norman Isaacson. These two individuals have been organizing with Patriot Prayer, the Proud Boys, and other bigotted and white nationalist groups, and have been in attendance at the events in Portland over the last two years which the city leadership claims to oppose.

We have written about domestic abuser, misogynist, and virulent Islamophobe Quincy Franklin before, and often pointed out his collaboration with extremely violent and openly white nationalist hate preacher Allen Pucket as well as his membership in Pucket’s hate group “Hell Shaking Street Preachers.” Franklin, a current employee of the Portland Water Bureau, often takes to Portland’s streets not just to locate buried water pipes, but to assault, intimidate, and harass members of the LGBT+ community, Muslims, and immigrants. 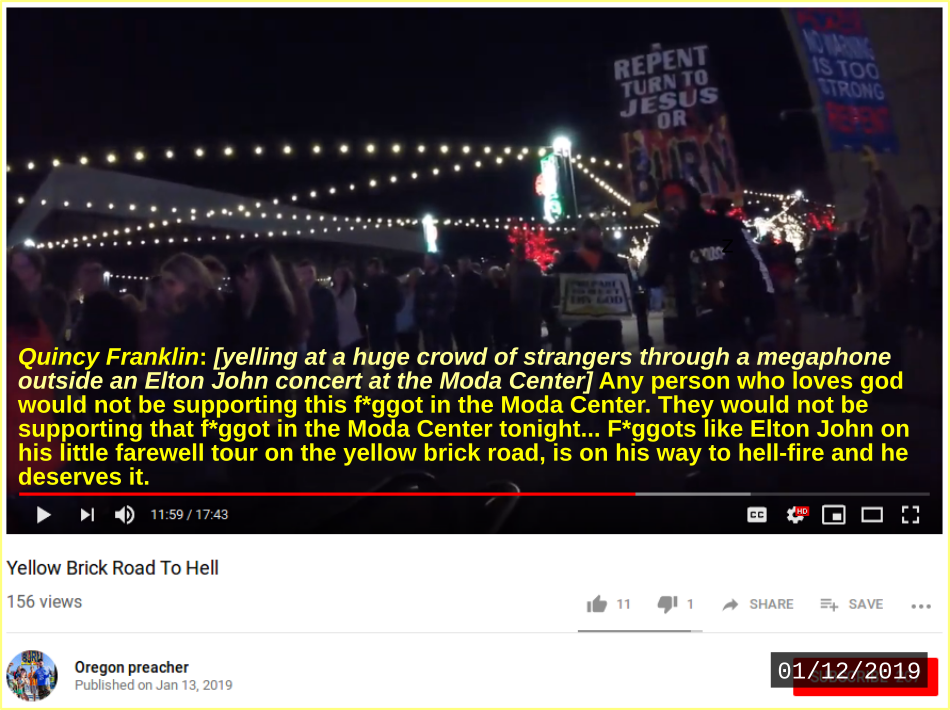 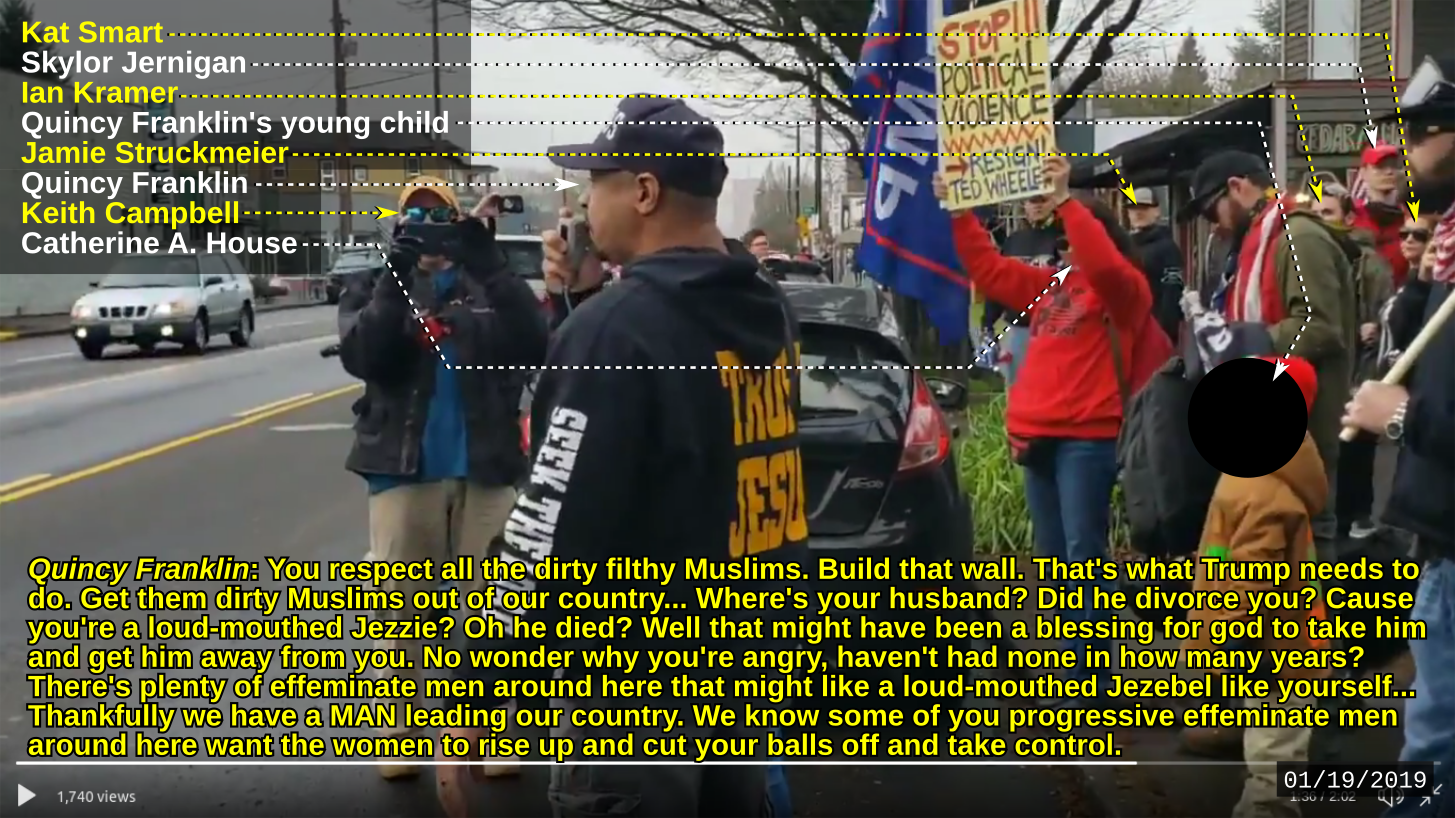 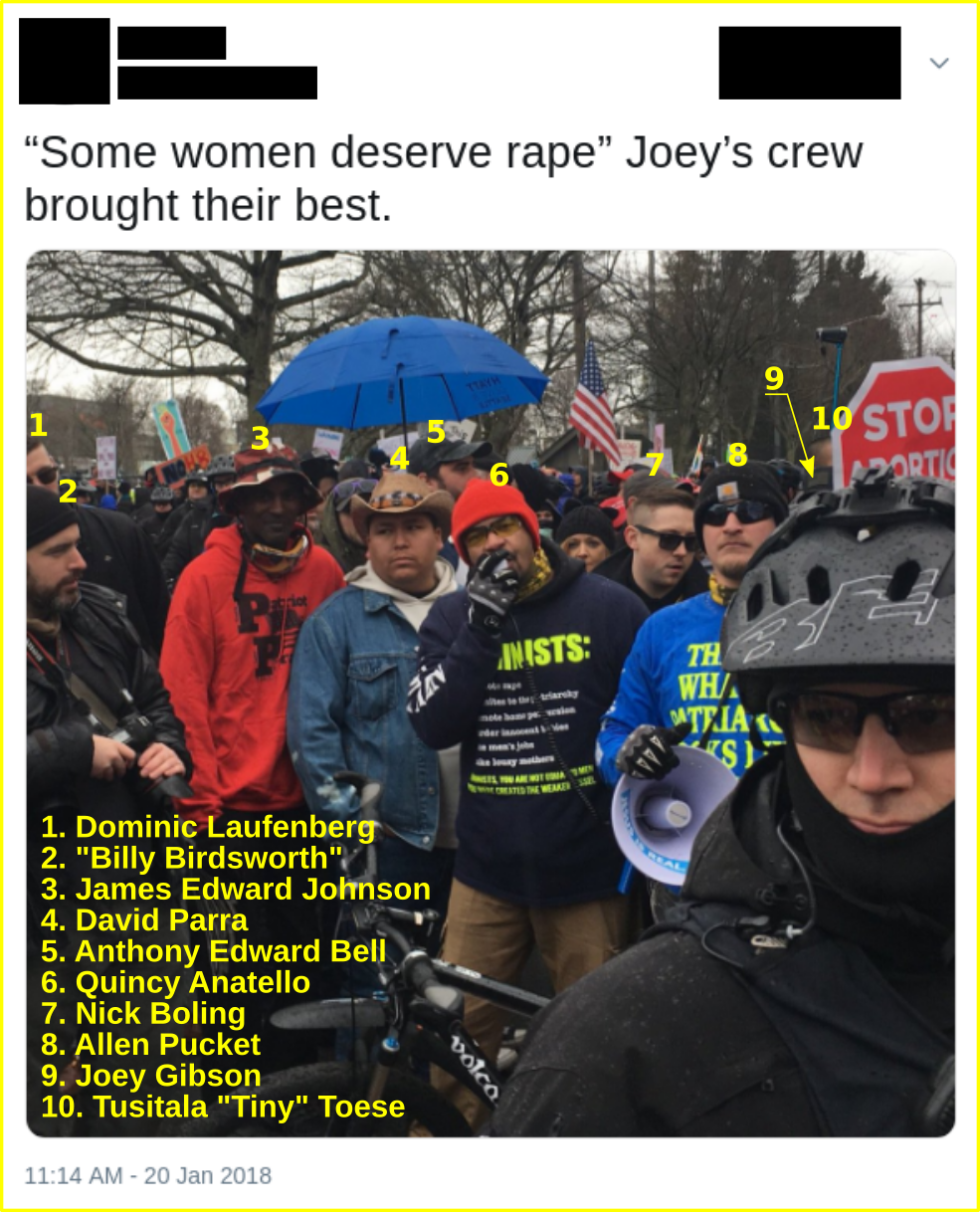 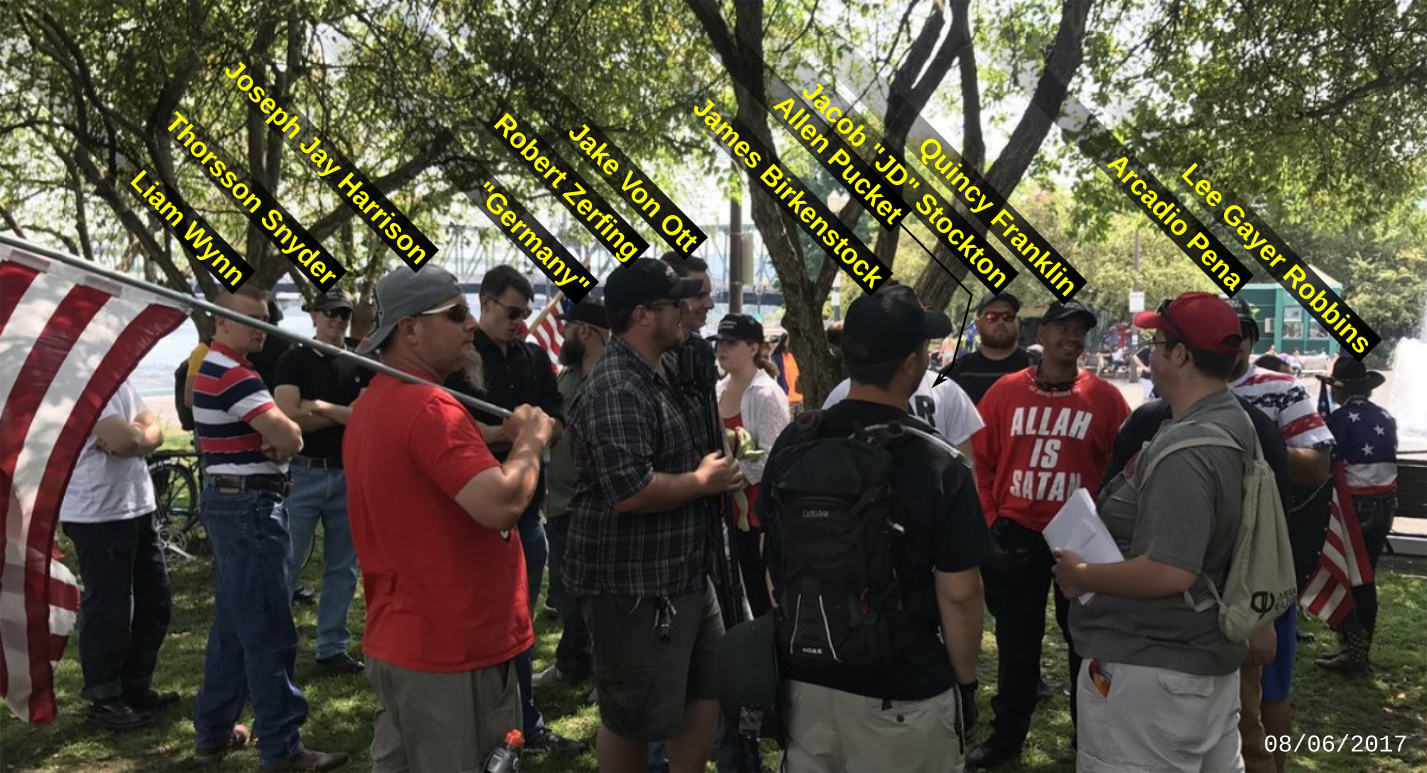 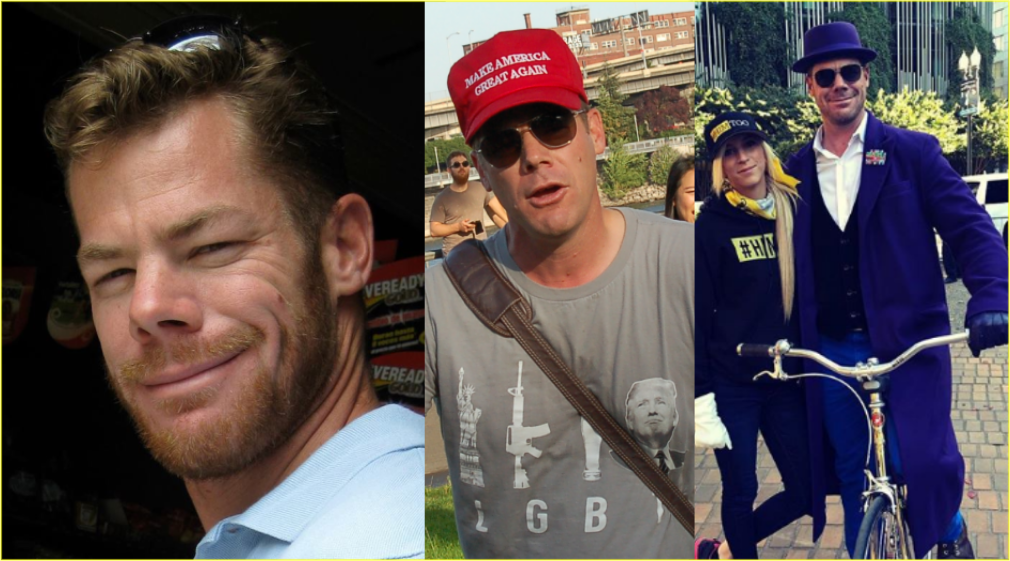 Gregory Isaacson, an Analyst at Portland Parks & Recreation, has been at countless Patriot Prayer rallies, where he threatens and harasses counter-protesters. He has previously been recorded on video denying that the Holocaust happened. He has been seen hanging out with Identity Europa, Proud Boys and other white supremacist groups and individuals at Joey Gibson’s events. 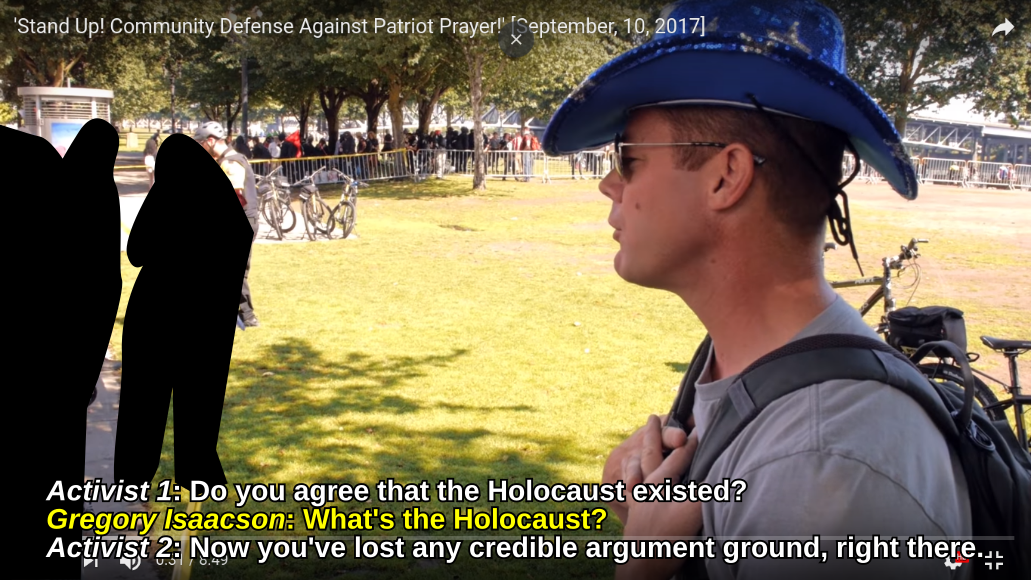 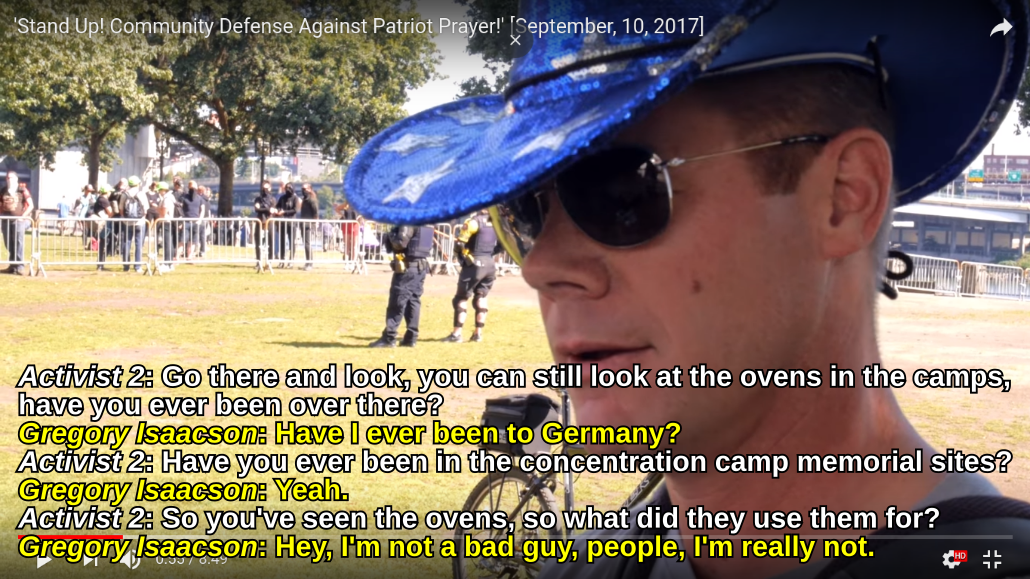 Gregory Isaacson engages in some holocaust denial at a Patriot Prayer rally. 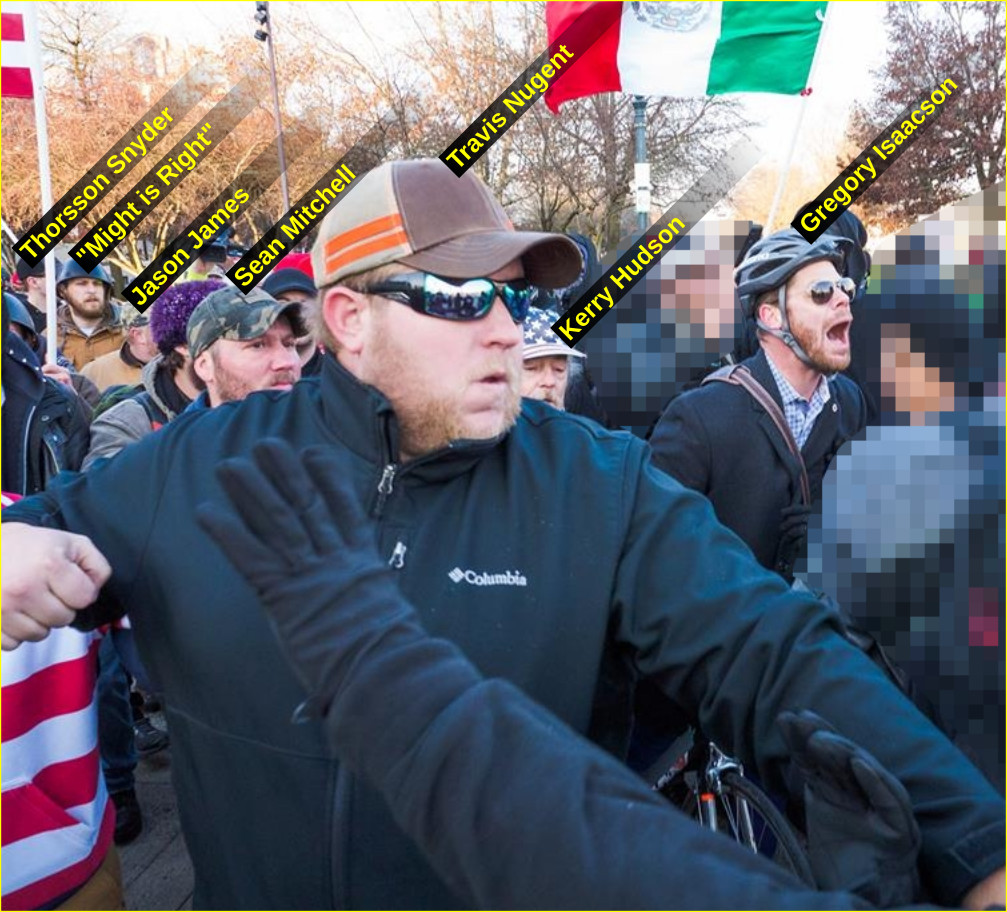 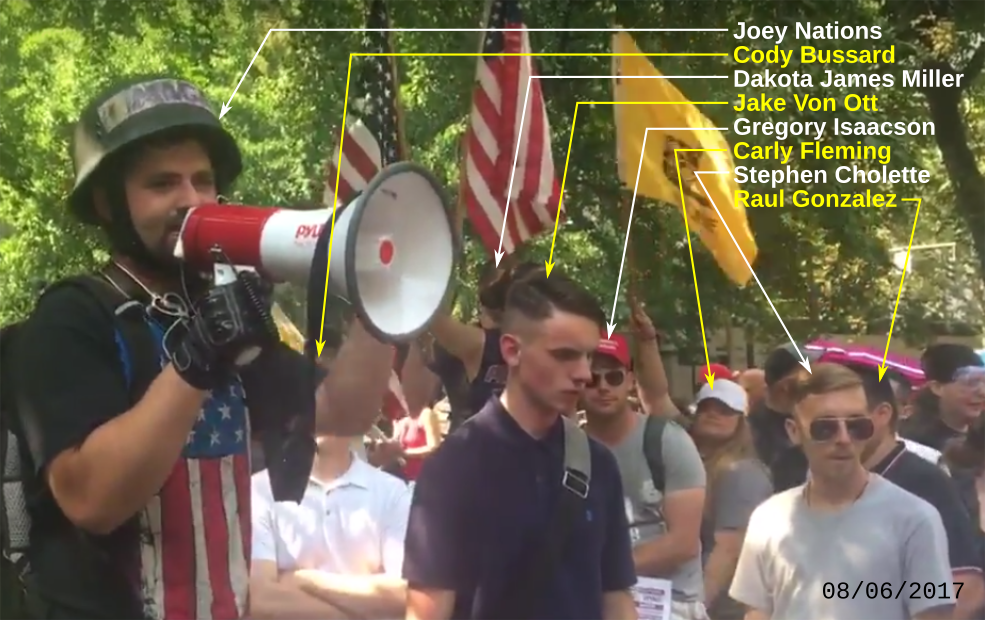 It is not enough for the Portland City Council to condemn the white supremacists who are invading Portland’s streets and threatening our community. The Council must take concrete action by removing bigots from public jobs, where their influence can be used to harm the community. If this is truly a city government that wants to take a stand against white supremacy, they must take action, not just produce empty resolutions.