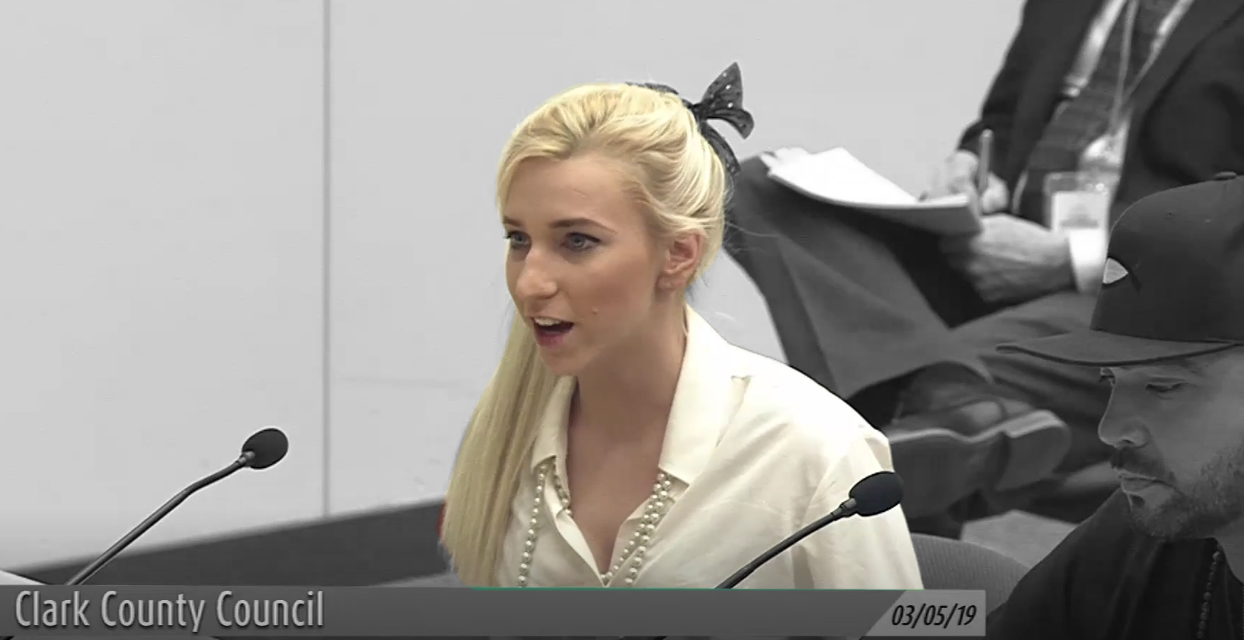 Haley Adams is a white nationalist member of Patriot Prayer who has been a consistent presence at Patriot Prayer and Proud Boy events and struggled to transform herself into an alt-right celebrity.

Recently, Adams’ constant attempt to propel herself into the far-right media spotlight has been a cause for significant in-fighting amongst Patriot Prayer, the Proud Boys, and her own group of far-right amateurs. After a feud led former Proud Boy Kim Costello to be outed, Rose City Antifa was sent another tip, detailing Adams’ home address.

In the course of a comment thread between a number of Patriot Prayer and Proud Boys activists, Tiny Toese reveals that Proud Boy Travis Nelson was disavowed for threatening a fellow Proud Boy, and that the Proud Boys formally “disassociated” from Haley Adams after she allegedly threatened to dox a member of the Proud Boys hate group. Adams’ boyfriend, Proud Boy Nate Strong pushes back, and Tiny Toese threatens to release information about Adams. Also participating in this conversation are Patriot Prayer members Chris Ponte, Russell Schultz, and Reggie Axtell; Joey Gibson; and would-be arsonist Proud Boy Rob Cantrall

Tiny Toese disavows Patriot Prayer and Columbia River Proud Boys president Daniel W Garris (aka Hans Foon Tarris) explains that it is partially due to disputes between the Proud Boys and Haley Adams. 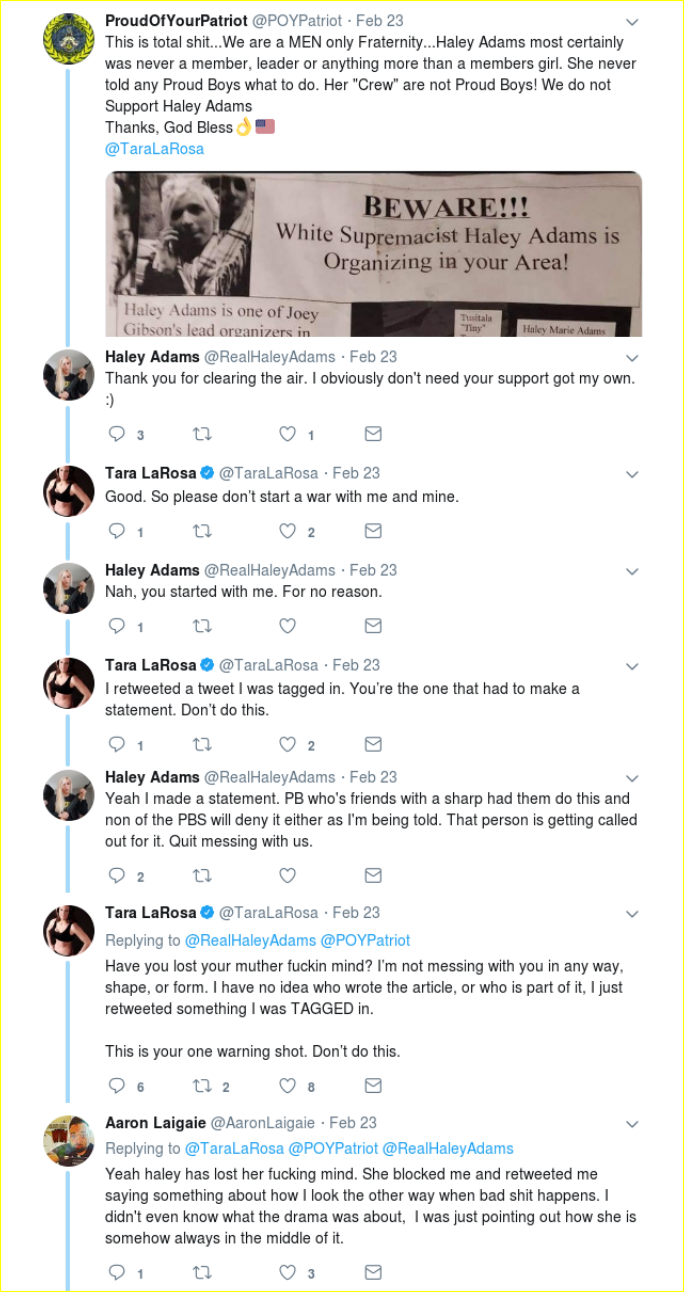 Haley Adams argues with Tara LaRosa, a former MMA fighter and indefatigable sycophant of the Proud Boys hate group. In the conversation Haley reveals that she suspects that Proud Boys have been disclosing personal information about her to people who oppose her white nationalist organizing.

Adams made her first appearance with semi-organized far-right activists in Portland on April 29, 2017, when Joey Gibson exploited an anonymous letter in order to storm through Portland’s Montavilla neighborhood with a number of fascists who threw roman salutes and left white supremacist graffiti in their wake. Jeremy Christian was one of the white supremacists who attended that rally, who less than a month later would murder two people and seriously wound a third, who attempted to stand in the way of him harassing two young Muslim women on a MAX train. 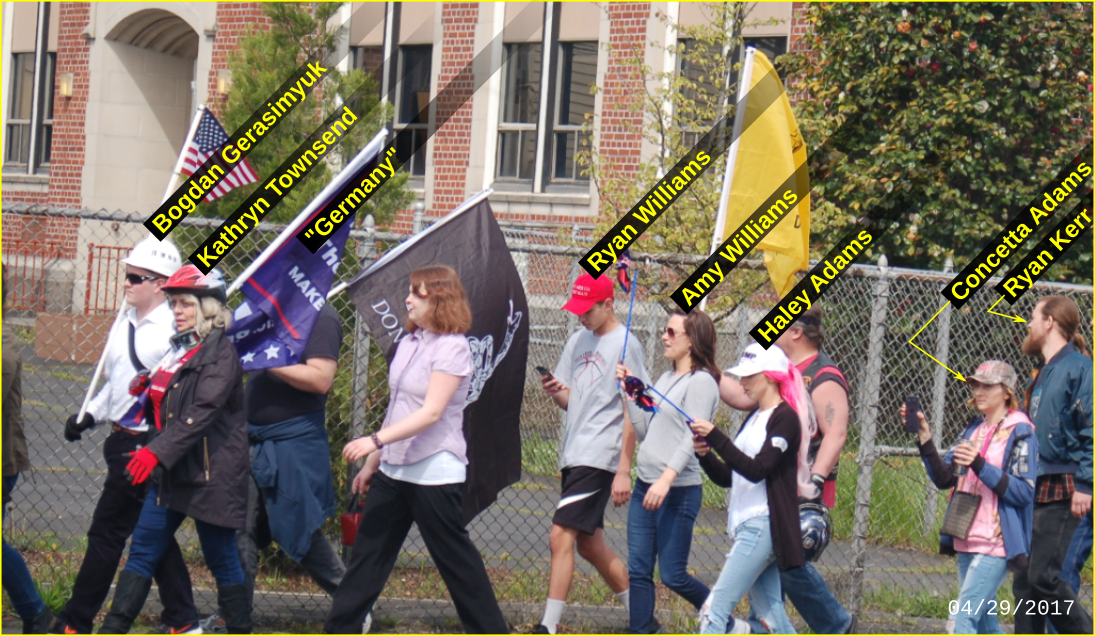 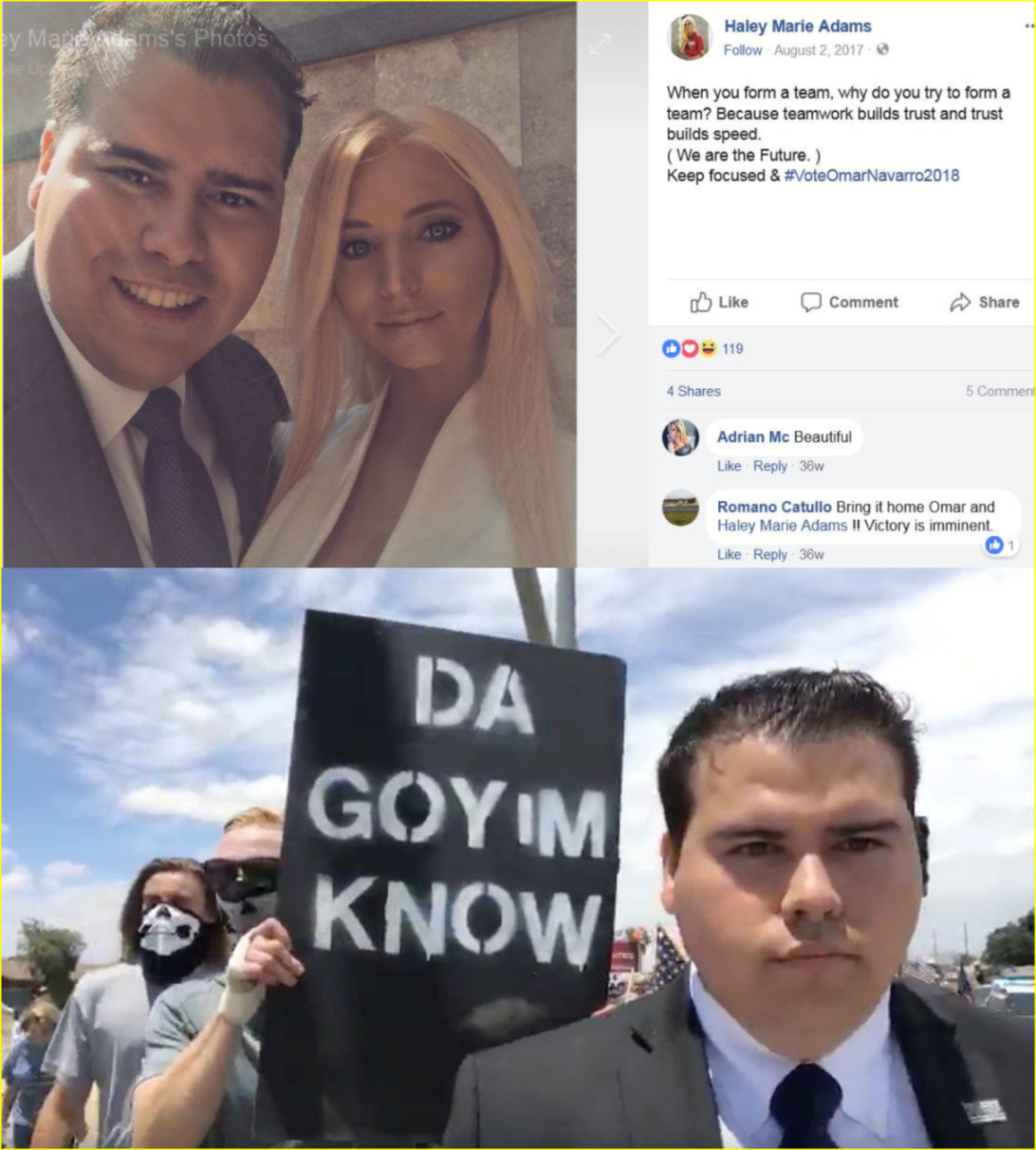 (top) In 2017, Haley Adams spent time working on the political campaign of racist alt-right Republican congressional candidate Omar Navarro. (bottom) Navarro is pictured rallying with members of the neo-Nazi Rise Above Movement as they hold an anti-semitic sign. 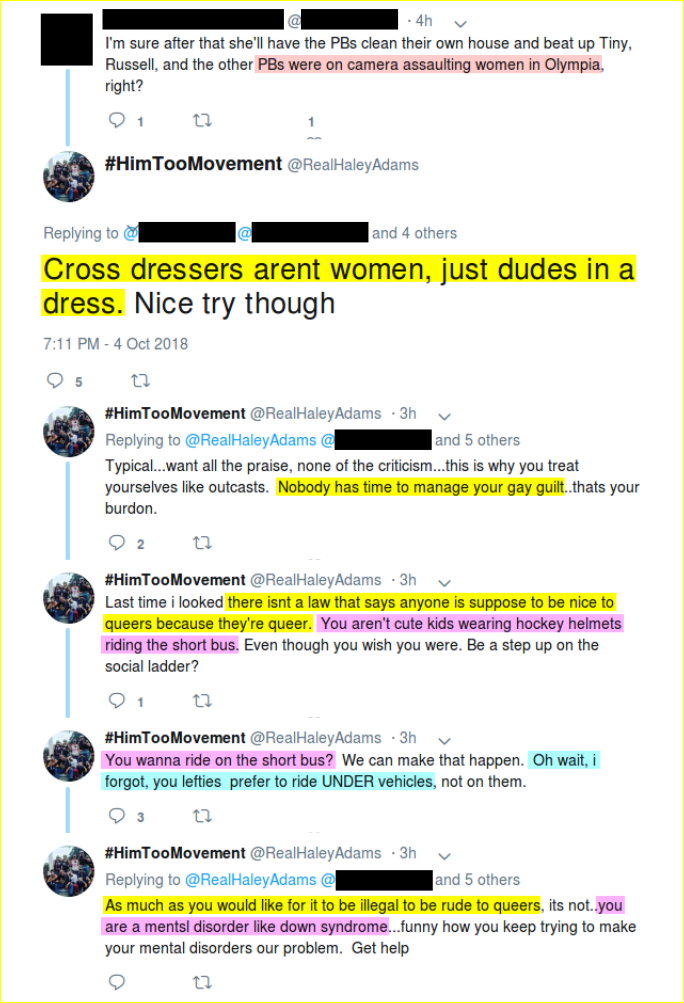 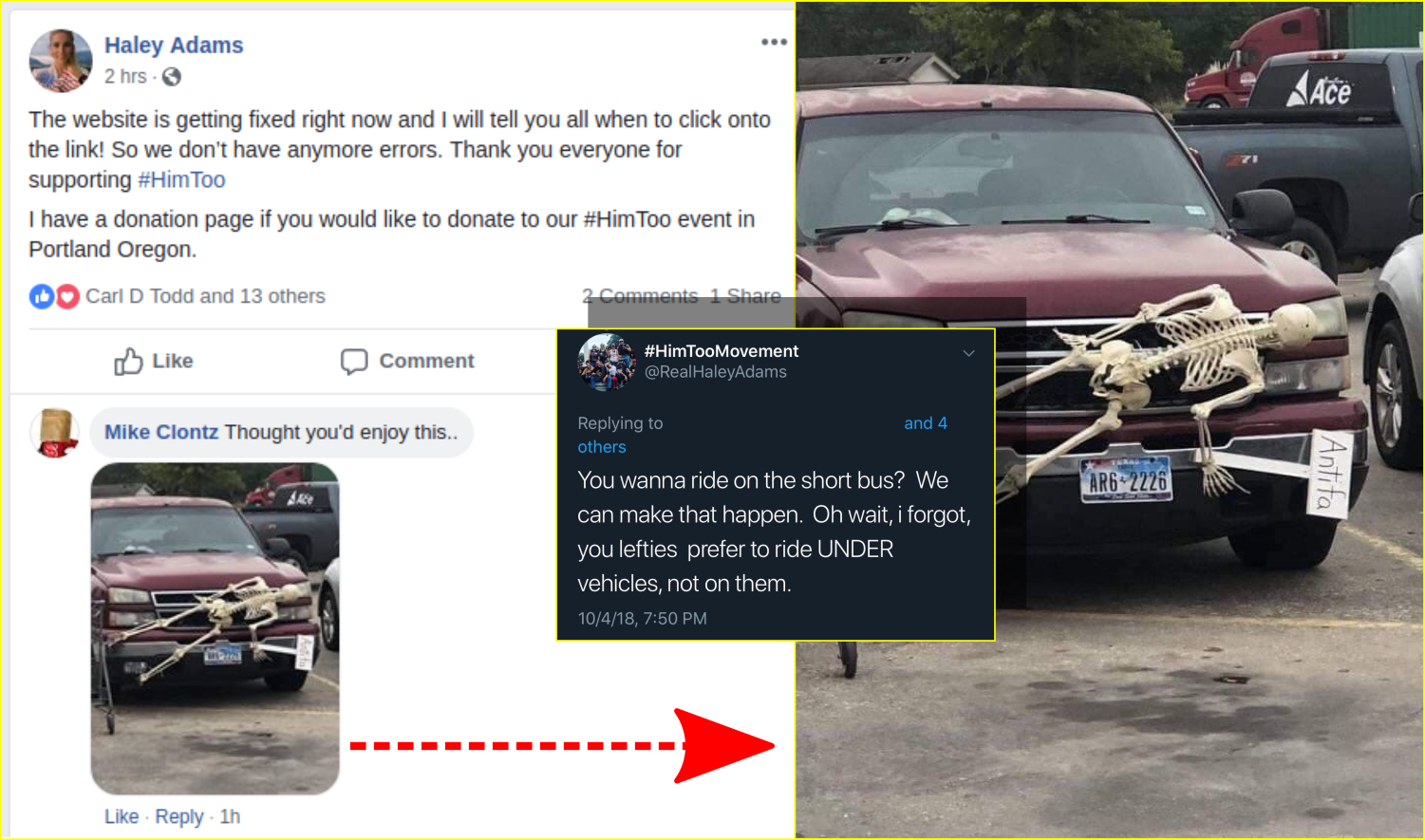 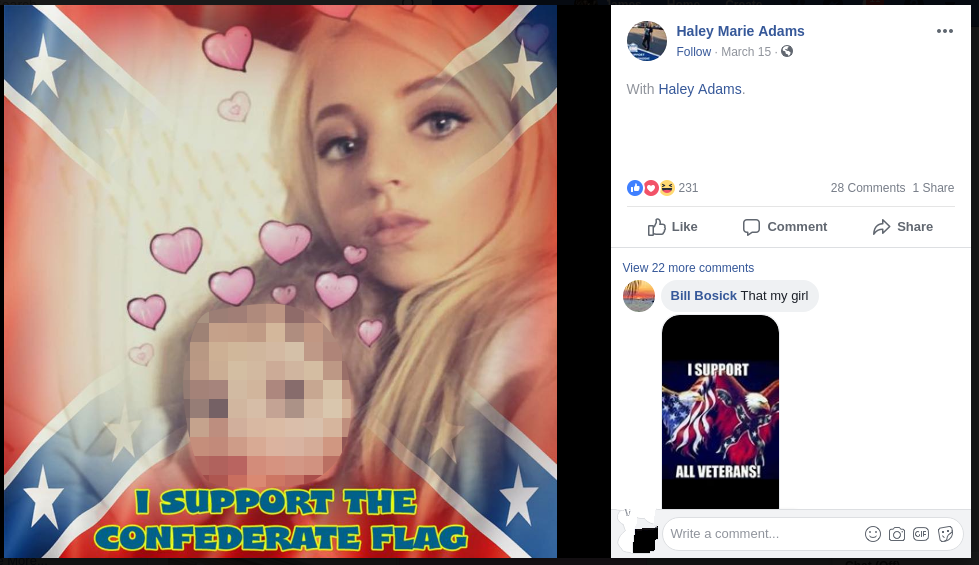 One of Haley Adams’ posts venerating the racist confederate flag.

Haley Adams talks with Proud Boy Vittorio DiNove in Portland on October 13, after DiNove beat activists with a baton. 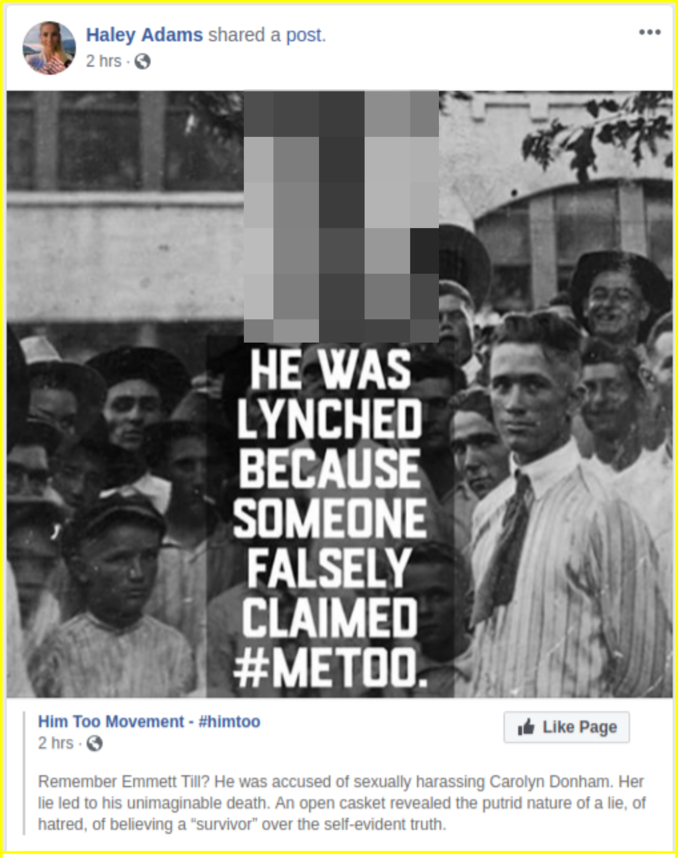 Adams claims Emmett Till was lynched simply because a false allegation of sexual harrassement was made against him, ignoring the overwhelming context of racist Jim Crow laws at the time. Her callous and dishonest use of Till’s murder in a meme promoting a reactionary moral panic gets to the heart of the bad faith within #himtoo, and perpetuates the routine exploitation of black suffering that is integral to white supremacy. 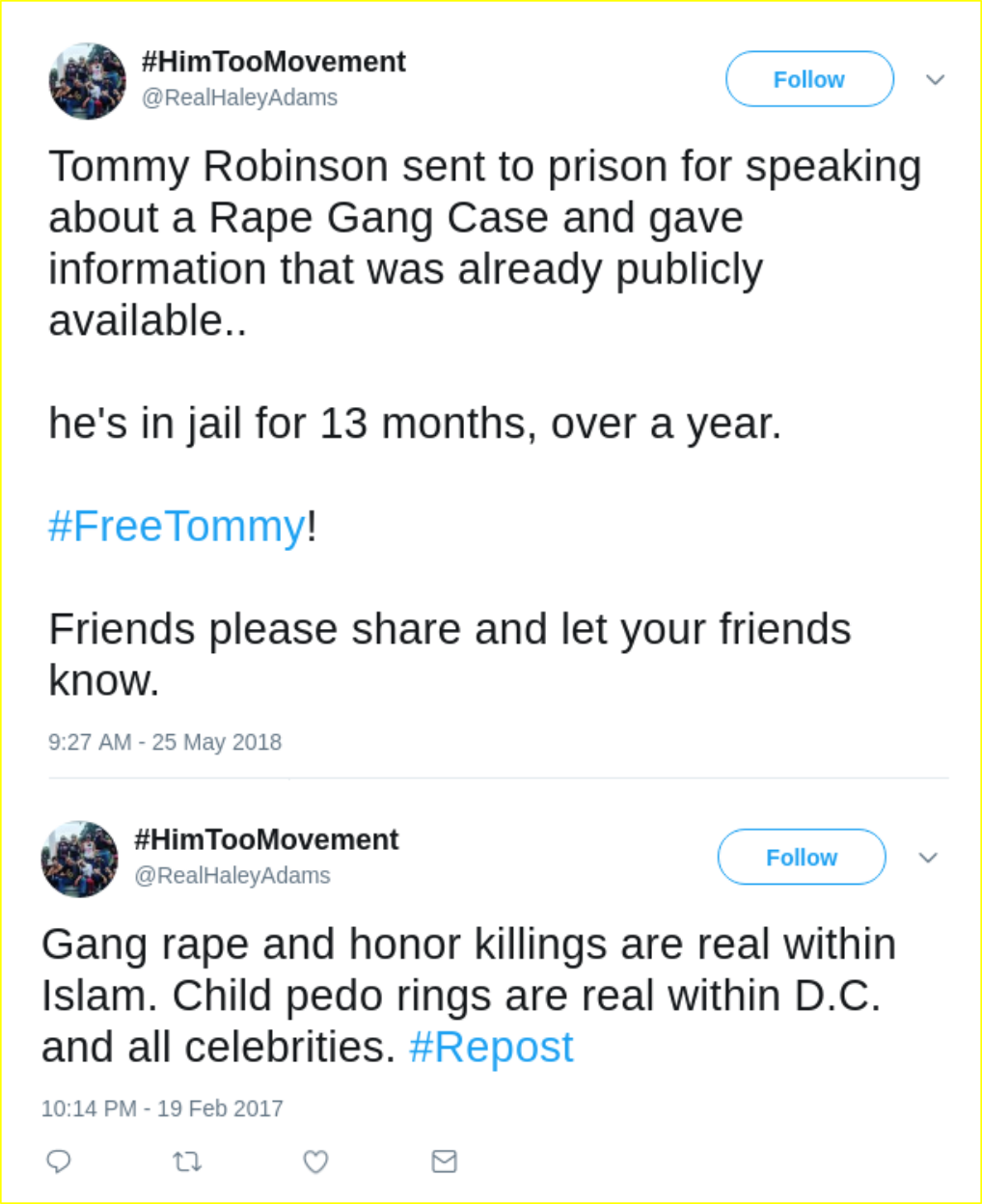 _Tweets posted by Haley Adams show that she is more than happy to participate in spreading unfounded rape accusations, as long as they further racist Islamophobic talking points or dangerous #PizzaGate style conspiracy theories._ 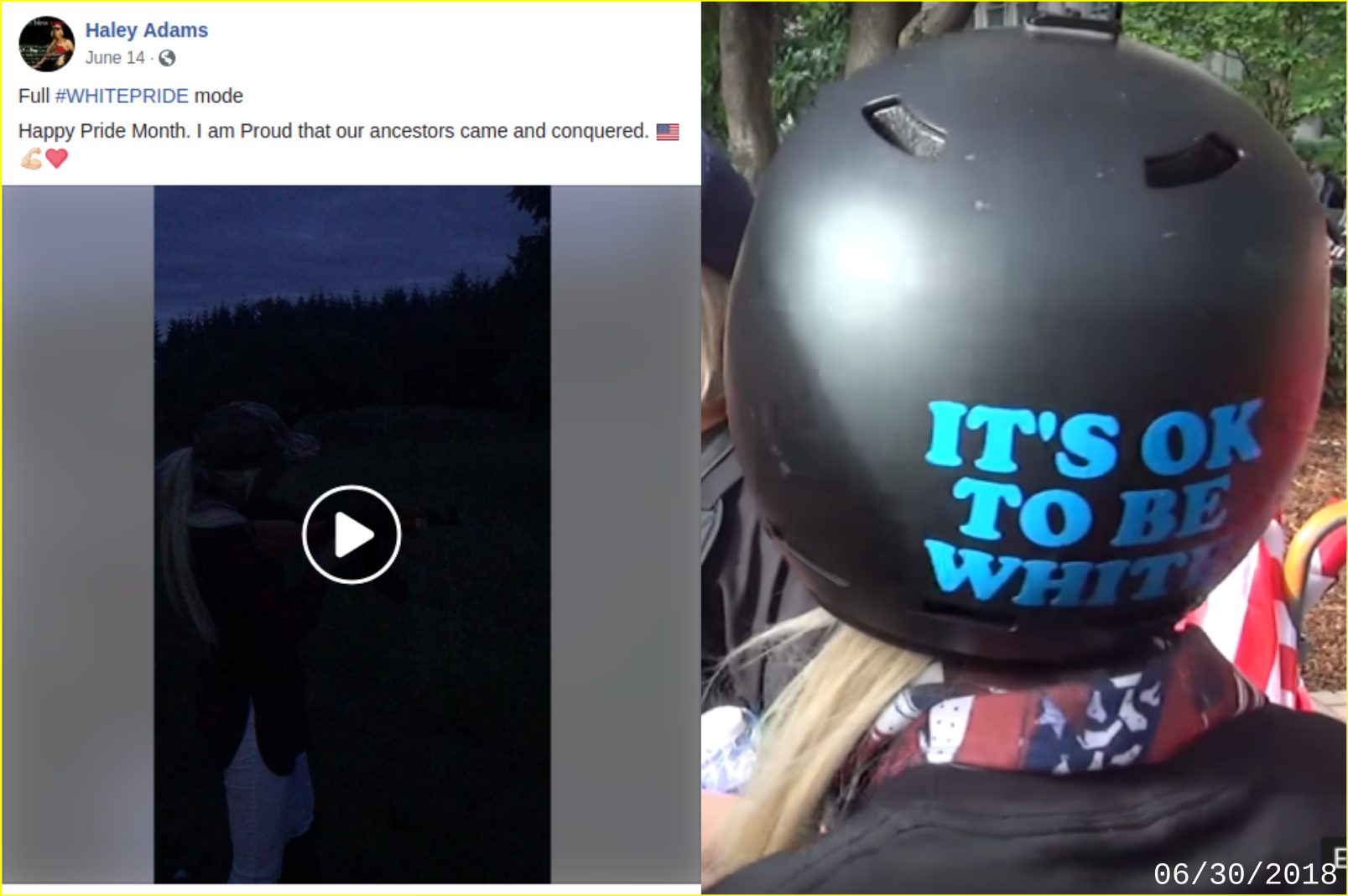 Adams frequently extolls racist themes on “White Pride” and “white power” on her social media accounts. She also wore a helmet decorated with the neo-Nazi propaganda slogan “It’s Okay To Be White” at Joey Gibson’s extremely violent 6⁄30 rally in downtown Portland, where she marched with fascists, some of whom had also participated in the infamous and deadly August 2017 neo-Nazi rally in Charlottesville. 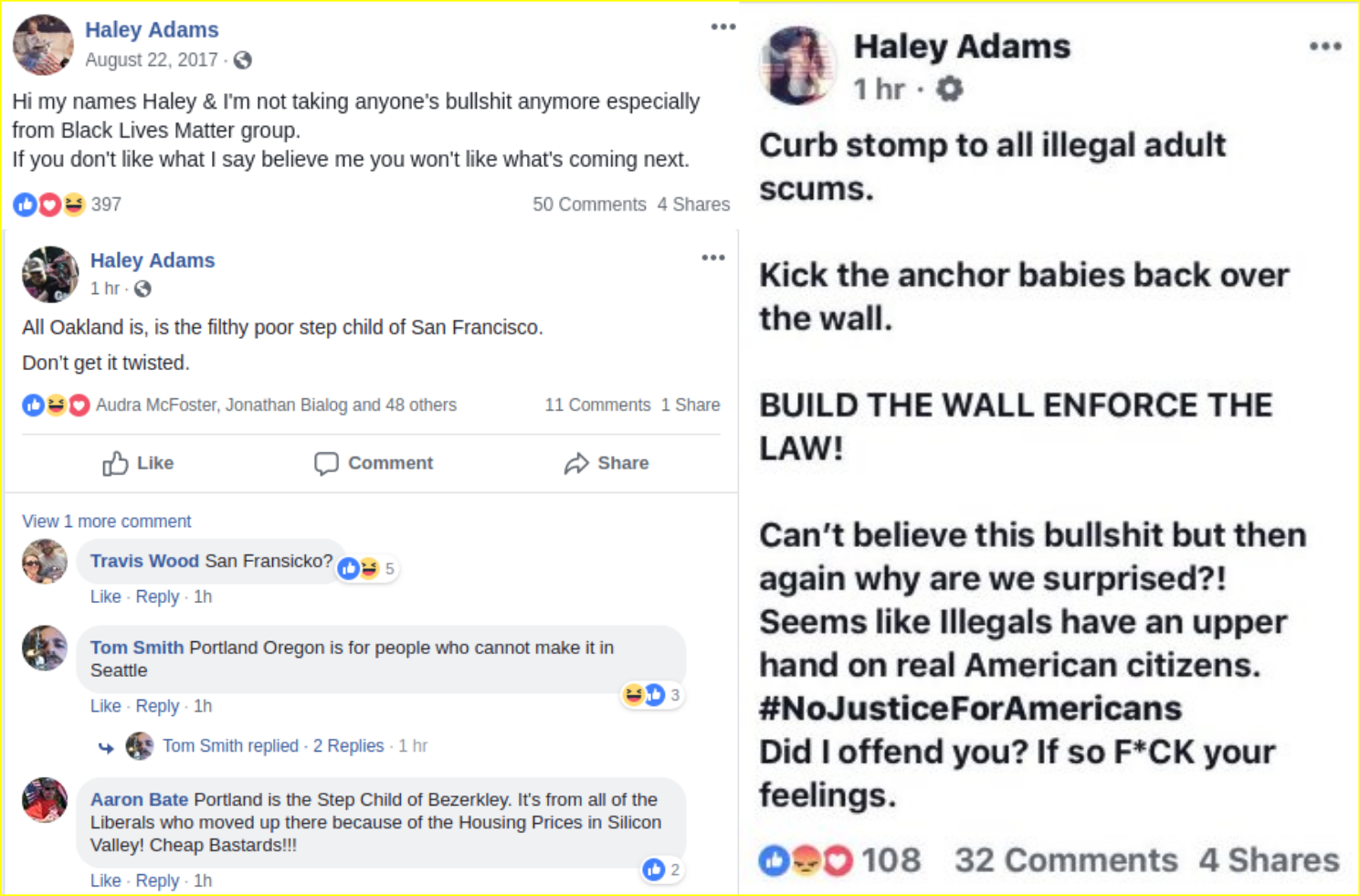 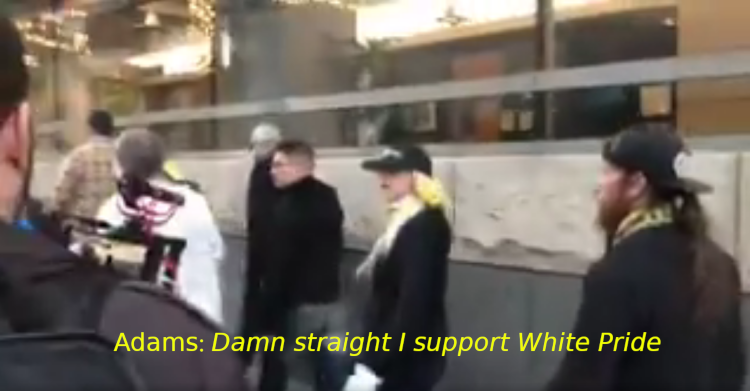 In a video from November 2018, Haley Adams yells that she supports “White Pride”. In the full video Joey Gibson and Tiny Toese attempt to discourage her from being so open about her racist views.

Through the end of 2018, Adams has started a campaign of attempting to get Ted Wheeler, the mayor of Portland, fired. It is unclear exactly why she is attempting this, other than voicing the idea that working with a white nationalist to express ire at elected officials is something that supposedly “the left” should do. To that end, she has disrupted city council meetings; held endless and poorly-attended sessions on the City Hall plaza; attempted to harass, and intimidate, and threaten leftists at union halls and other meeting spaces; and even disrupted the city’s “listening session” responding to police and far-right collusion, by standing on a church pew, yelling, and gesturing in the style of a roman salute. The only notable effects of these activities is that she has drawn in a small group of far-right personalities with nothing better to do than follow her around and film her antics. 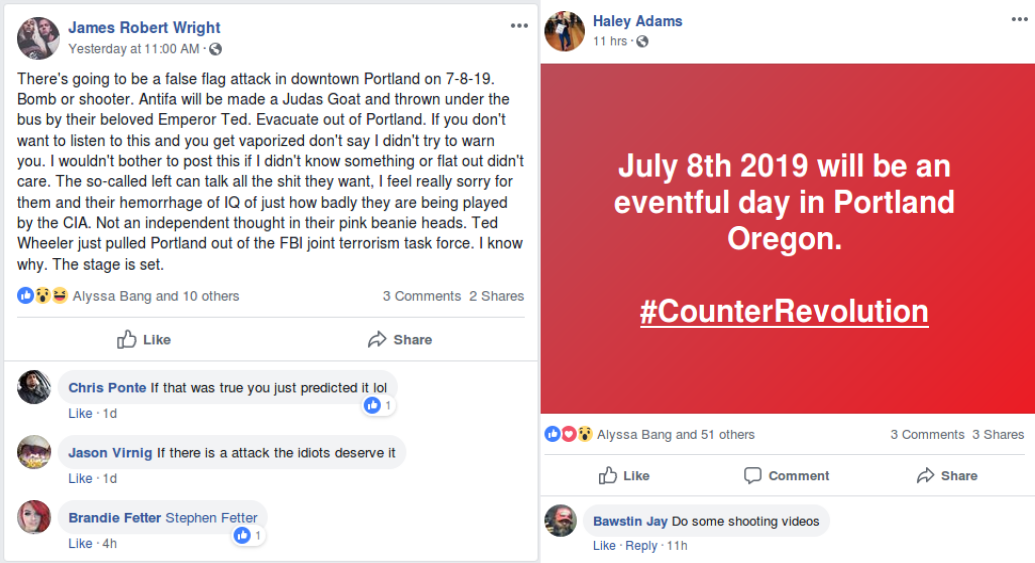 Rose City Antifa will continue to defend our city and our communities against any incursion by racists and fascists. If you have information about Adams, her cronies, or other white supremacist organizing, please email us at [email protected].