A Pattern of Enabling Racist Violence

On Friday May 26th, a man on Portland public transit was reported to have yelled Islamophobic hate speech at two women, one in a hijab. He was confronted by other passengers, and now two of these people are dead, and another is in the hospital. White supremacist Jeremy Christian was arrested for the attack. Christian is well-known to anti-fascist activists in Portland, because he was recently seen at one of Joey Gibson’s free speech rallies.

Joey Gibson, a video blogger from Vancouver, WA known for organizing far-right rallies, has already taken to Facebook to plead that people not “politicize” these deaths, well aware of how Portland is already long tired of his endless circus. The deaths are tragic, but the act was always political. The attack occurred on the day before Ramadan. The islamophobic slurs that witnesses reported Christian yelled before the attack are no different than those used by Joey Gibson’s friends, the homophobic and xenophobic street preachers, seen around Portland screaming at immigrants and others. This is the rhetoric that Gibson defends under the banner of free speech. Jeremy Christian posted often and at length with threats of violence against anti-fascist activists. The victims were killed because they were standing up to hate speech. These are identical to threats that Gibson’s group and other associated far-right groups have made against those same activists. 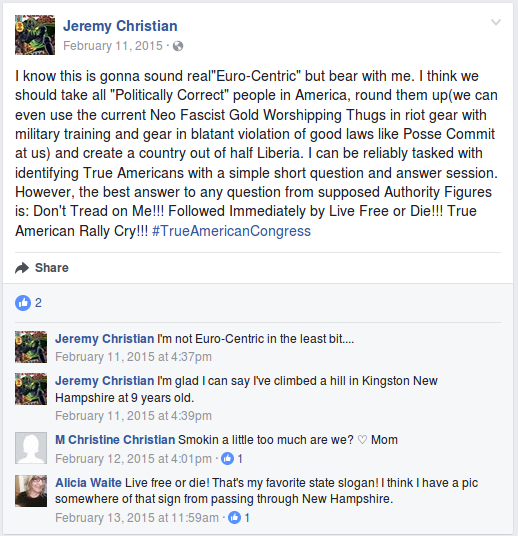 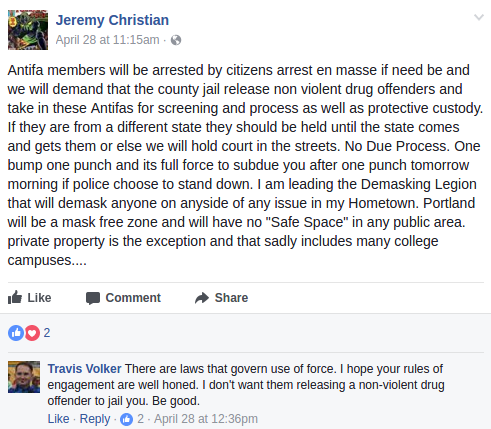 Gibson, his group Warriors for Freedom, and the other far-right individuals who frequent Gibson’s Facebook pages and events, took a hands-off stance in regards to all these obvious indicators of imminent political violence. They made lukewarm disavowals of Nazis, but allowed them to congregate, proselytize, and recruit nevertheless. When Jeremy Christian showed up to their rally, they wouldn’t let him stand next to them for photos because of his Nazi salute, but they gave him a special security guard, and eventually wrote him off as an “antifa plant,” as if one more conspiracy theory would allow them to wash their hands of their own responsibilities. Meanwhile, members of the KKK, Identity Europa, and other white supremacy groups joined them with impunity. 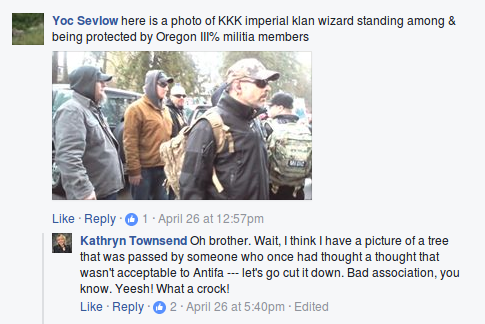 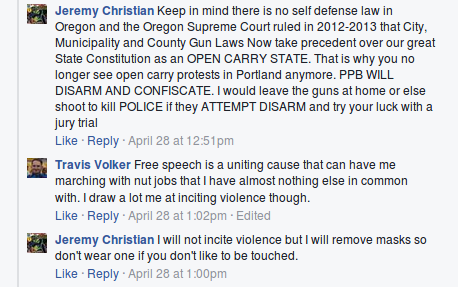 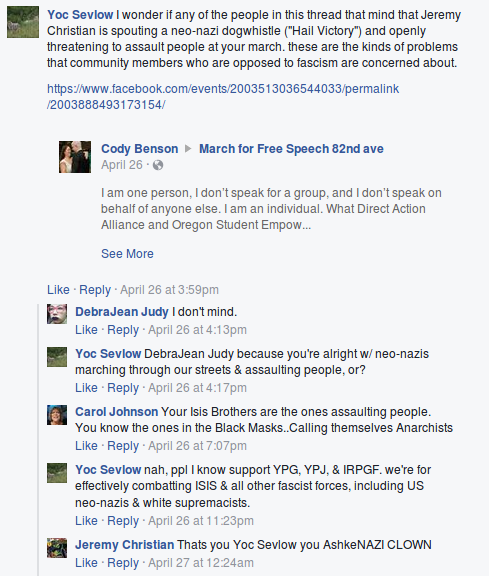 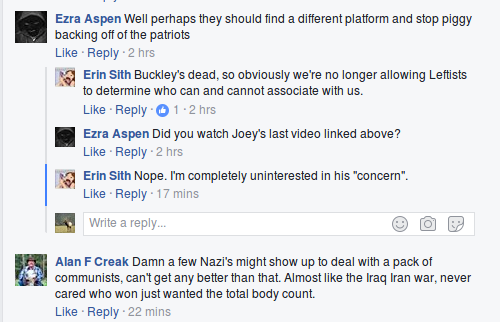 Now, after these terrible events, the far-right predictably argues that Jeremy Christian was some kind of “lone wolf.” That he was mentally unstable. That he had a history of violence. What they refuse to acknowledge is his history of hate speech, because it would show the signs of a terrible pattern. Christian’s Islamophobia ran so deep that he would commit violence to back up his ideas. Christian has a history of promoting theories of racial separatism, anti-semitic conspiracies, and threatening lethal force against minorities and at-risk communities. And at Joey Gibson’s “free speech” rally, his ideas were encouraged and echoed by those around him. An environment supportive of hate speech and violent aggression against activists and at-risk communities was fuel to the fire for Christian to convert his beliefs into action. 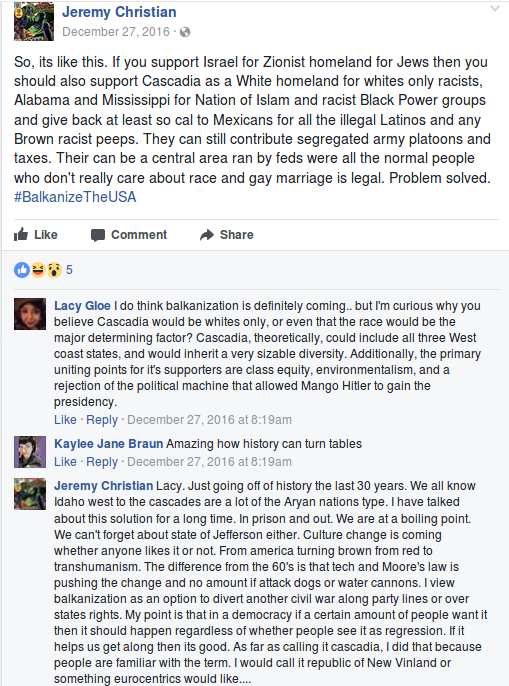 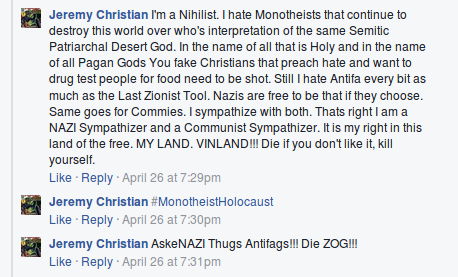 Joey Gibson’s next far-right rally is on June 4th. Six days after that, he is organizing an anti-Sharia rally, at which Christian’s Islamophobia would be welcome, were he not already in jail for a hate crime. But Rose City Antifa asks: who will be the next Jeremy Christian? Christian was far from the only white supremacist to appear at Gibson’s rallies. Who will be the next white supremacist with a history of violence, who is given a platform to espouse their hate, who will become the next “lone wolf” for the far-right to disavow?

The attack is already politicized, because this is not a chance tragedy, but a pattern we have seen time and time again in Portland and across the country. We are begged to ignore the hateful propaganda of the far-right, and allow it space to prosper in the name of free speech. And then, when blood is spilt, the community feigns ignorance.

Meanwhile, as if this wasn’t bad enough, the worst of this crowd are beginning to creep onto social media, defending Christian. There is no line they will not cross. There is no going “too far.” These events are not about an exchange of ideas, they are about furthering the pattern, which will not stop as long as there are more victims to be had. They will swarm on the internet, they will hide in plain sight at “free speech” rallies, and when the time is right, they will make good on their threats. 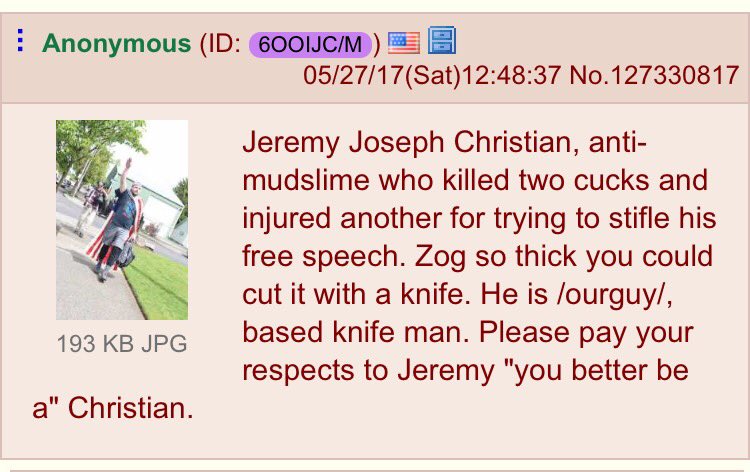 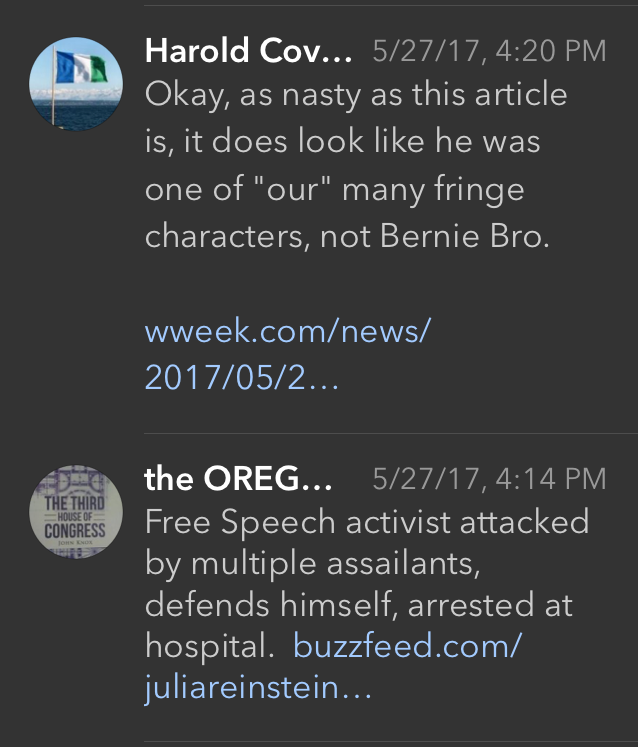 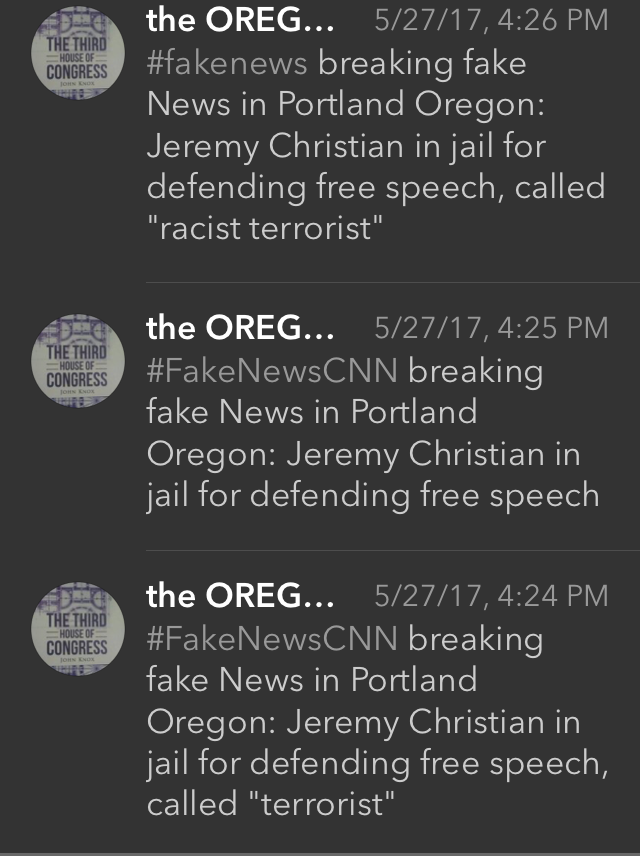 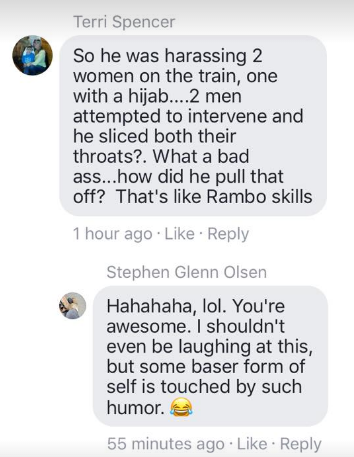 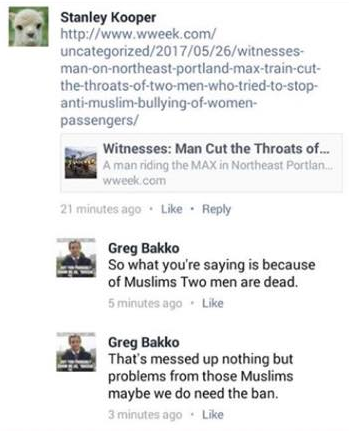 Rose City Antifa will not allow this pattern to repeat. Join us on June 4th, and stand united against this racist violence that hides under the guise of “free speech.”