Fascist Creep in the Patriot Movement: Steve Shallenberger and Friends

It is often difficult for people to tell the difference between run-of-the-mill Trump supporters and fascists at first glance. Fascists often exploit Trump supporters, by hiding in their midst at events, and disguising themselves with Trump apparel, rather than showing fascist flags and symbols. But additionally, the line between far-right groups and fascism can be hazy. Steve Shallenberger, a former neo-nazi skinhead who now attempts to pass himself off as simply a “patriot,” is a perfect example of how fascism can hide in plain sight in the far-right. 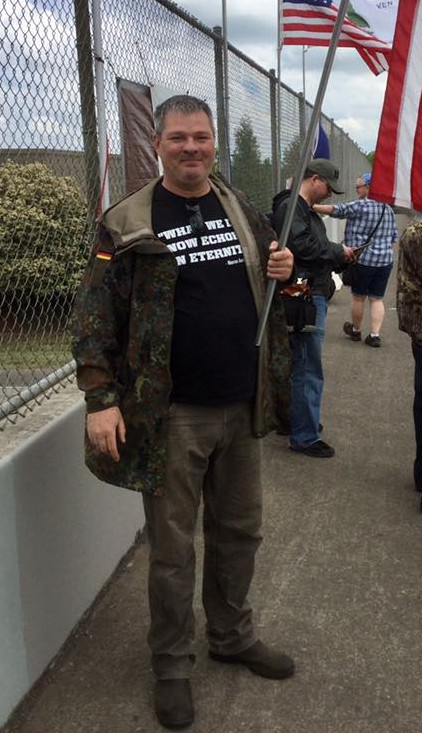 Back in the early nineties, Shallenberger was a bonehead, as reported by PNW-AWC and Eugene Antifa. He was friends and housemates with Randy Krager, a member of white power group American Front, who would later found the group Volksfront. In April of 1992, Krager and Shallenberger severely attacked two African-American men, Roger Beasley and Jacob Johnson, on Killingsworth Street. As reported by Stuart Tomlinson for the April 21, 1992 edition of The Oregonian:

According to police, Johnson and a friend were walking down the street when the incident took place. The friend, Roger Beasley, told police that he and Johnson were called over to a bus stop by two women, Tanya Vaughn, 20, and Summer Shields, 17. However, the women told police that Johnson and Beasley were “harassing’’ them.

Beasley, 31, said Monday that one of the women slapped him twice.

Beasley, who says he’s blind in one eye, said that as he turned he saw two men coming at him, and he was struck in the back by a stick or bat. Then he ran into a store and asked someone to call 9-1-1.

Krager and another man, 24-year-old Steve Shallenberger, who also is white, then apparently began fighting with Johnson. Krager and Shallenberger were friends with Vaughn and Shields.

When Beasley returned, he said he found Johnson unconscious in the middle of Northeast Killingsworth Street.

His glasses were crushed,’’ Beasley said Monday, “and he was bleeding from his nose and mouth.''

Johnson is in Emanuel’s intensive care unit with a skull fracture, contusions and other head injuries, including swelling of the brain, a hospital spokeswoman said.

Other witnesses directed police to the apartment where Krager and Shallenberger lived, telling them that the apartment is a place where white supremacists allegedly hang out.

Later, in August of 1992, Shallenberger was arrested with several other bonehead associates in Idaho. They were found driving a car full of weapons, headed towards Randy Weaver’s compound. Weaver, a member of the Aryan Nations white supremacist group, was currently involved in an armed standoff with US Marshals, that resulted in the death of one Marshal, Weaver’s wife Vicki, and their 14-year old son.

As reported by John Snell and Stuart Tomlinson in August 27, 1992 edition of The Oregonian, Shallenberger and the others were arrested with: “six assault rifles, a 12-gauge shotgun, a rifle and a revolver. One rifle had a bayonet attached. None of the weapons was loaded, but a sizable amount of ammunition was in the truck and also was seized.” Jason C. Timmons, one of the other boneheads in the car, was reported in the same article to not only be friends with Randy Krager, but also with Kenneth Mieske, the member of East Side White Pride who murdered Ethiopian immigrant Mulugeta Seraw in 1988, during a fight not unlike Krager and Shallenberger’s attack on the two men on Killingsworth Street.

Not long after these run-ins with the police, Shallenberger joined the Army, and was deployed to a number of cities in Germany. There, he served with Kip Beebe. 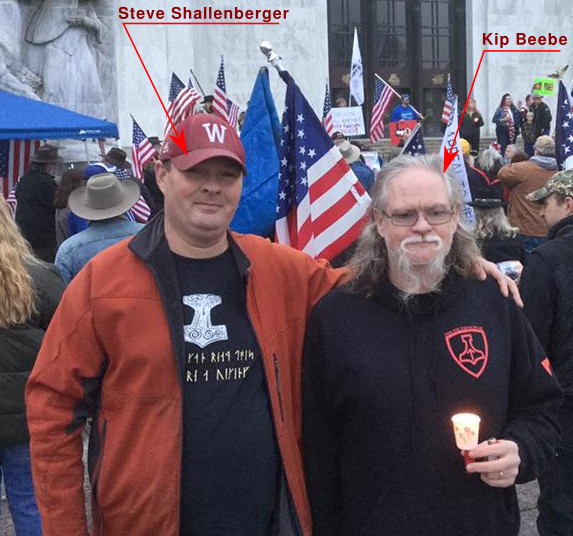 While in Germany, Beebe and Shallenberger were involved with racist hooligan assaults against Turkish immigrants. As Steve Shallenberger recounts in a Facebook post: “So many fond memories of beating those cunts! Wine bottles in Worms, pool sticks in Ludwigshafen, machetes in Mannheim.”

Shallenberger and Beebe reminisce about beating up Turkish people in Germany while serving in the Army.

Kip Beebe often claims that he is not racist– despite his fondness for beating up ethnically Turkish people. But he is a practitioner of Asatru, a pagan religion. Odinism, an offshoot of Asatru, has had several neo-nazi leaders, such as David Lane, member of white supremacist terrorist group The Order. Not all practitioners of Asatru are racist or fascist, but not all members of Asatru have taken part in racist hooligan violence like Kip Beebe, either. 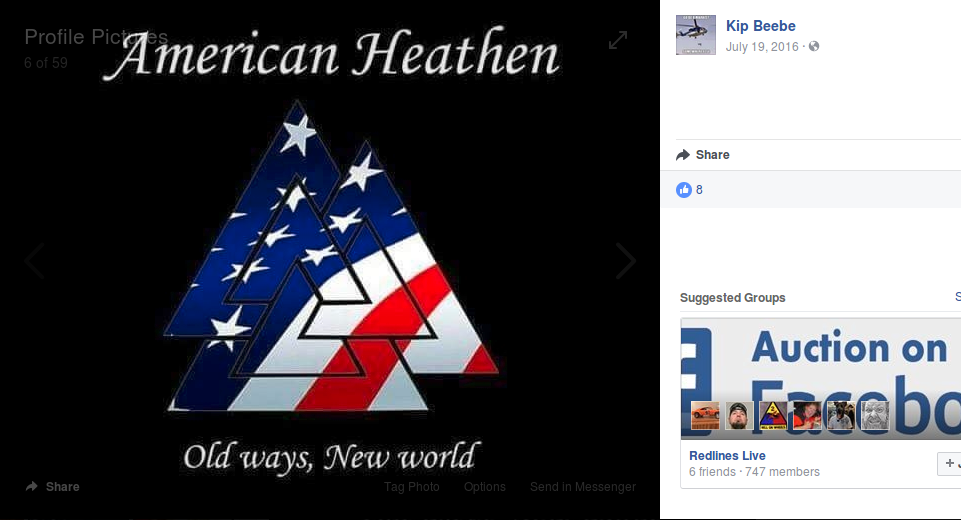 Beebe also hates leftists and anti-fascists with a passion, making many threats against them. He also is a fan of many alt-right memes that derive from fascist sources. 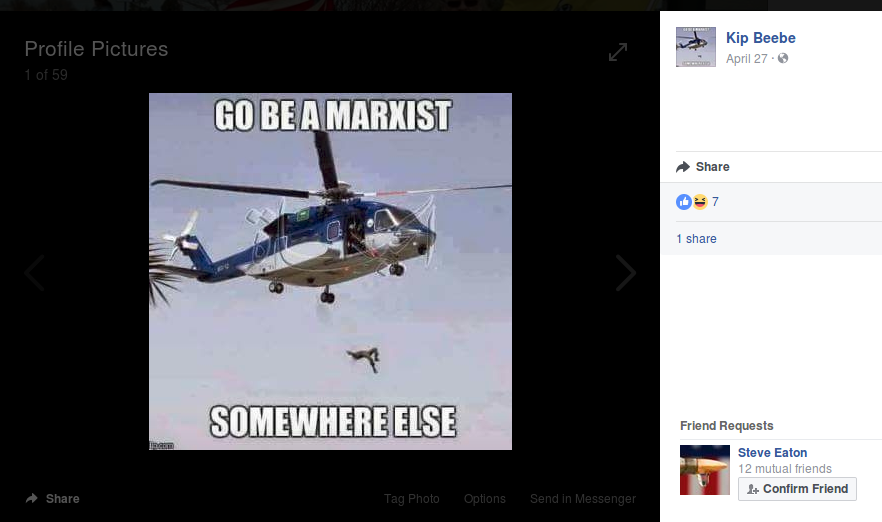 The “helicopter rides” meme celebrates far-right dictator Pinochet, who murdered many leftists by dropping them out of helicopters. 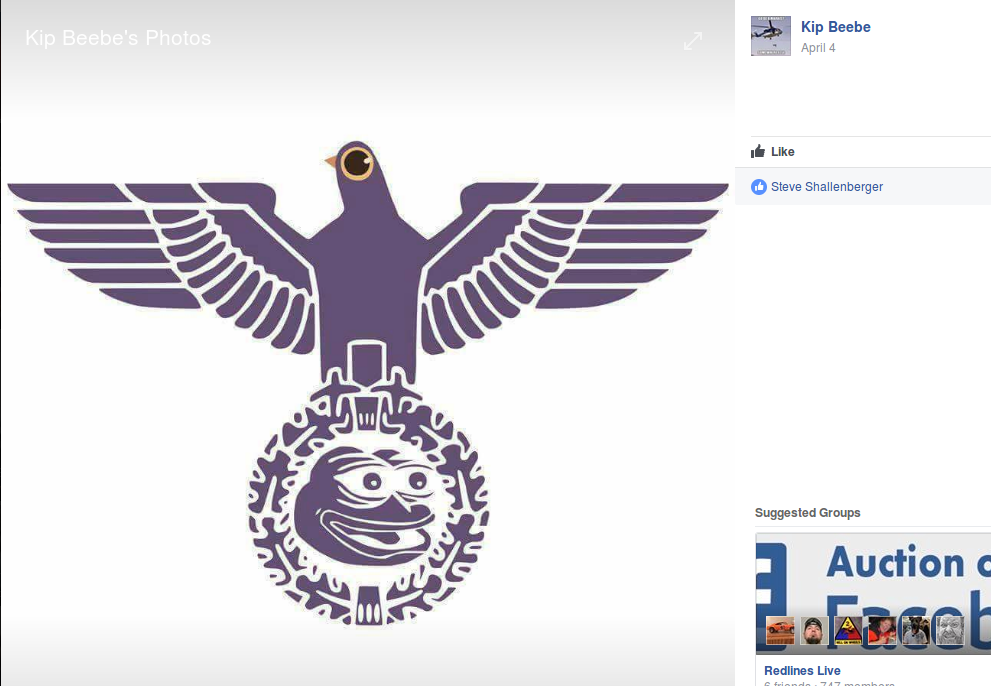 Here, Beebe posts a re-mix of the Nazi eagle motif, using a number of alt-right memes. Note that Steve Shallenberger “liked” this. 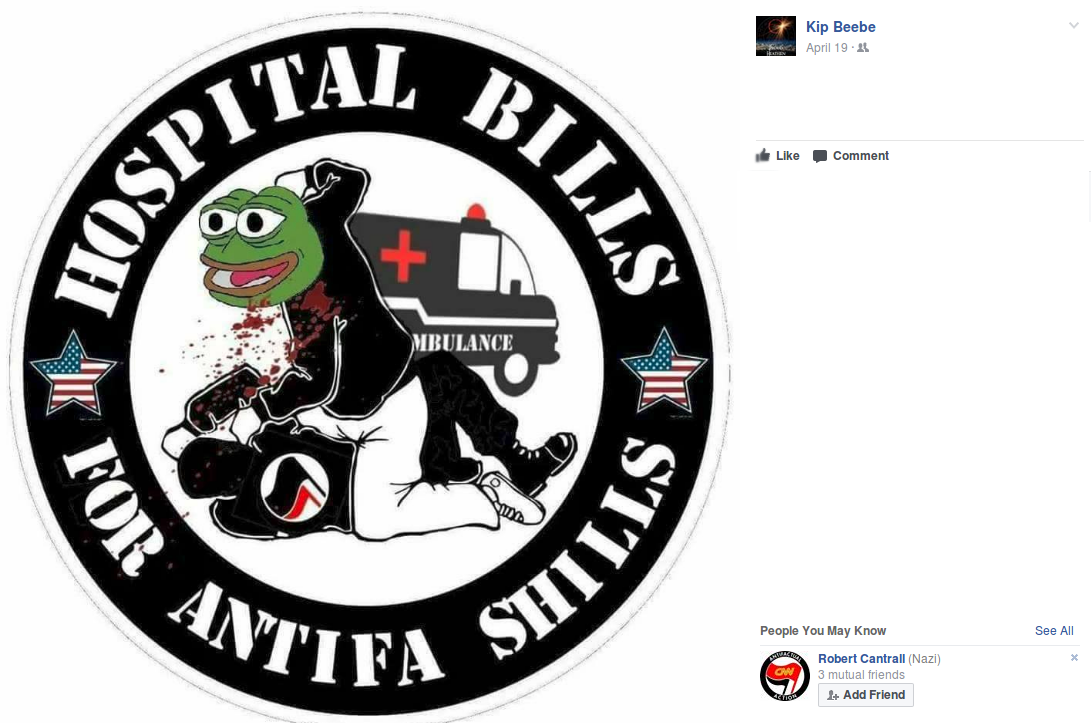 Kip Beebe’s son, Kip Beebe Jr. (aka Kip Lawrence Von Beebe) is also a practitioner of Asatru, and is even more aggressive with fascist memes than his father. 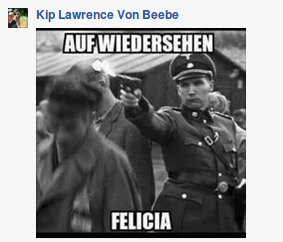 Beebe Jr. is also a big fan of the fascist organizations Operation Werewolf and the Wolves of Vinland. In the following conversation, he and a member of Wolves of Vinland chat about the group, and argue that it is not white supremacist, even though it clearly is. 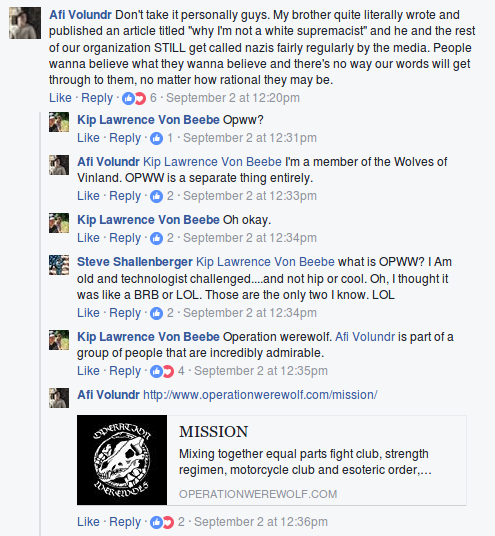 Both Beebe Sr. and Jr., as well as Shallenberger, have been attending numerous patriot events in the last couple years, as well as Joey Gibson’s events. On these occasions, they portray themselves as simply Republicans or patriots, leaving their more fascist imagery online.

Beebe Jr. and Shallenberger at a patriot event supporting the Malheur occupiers. 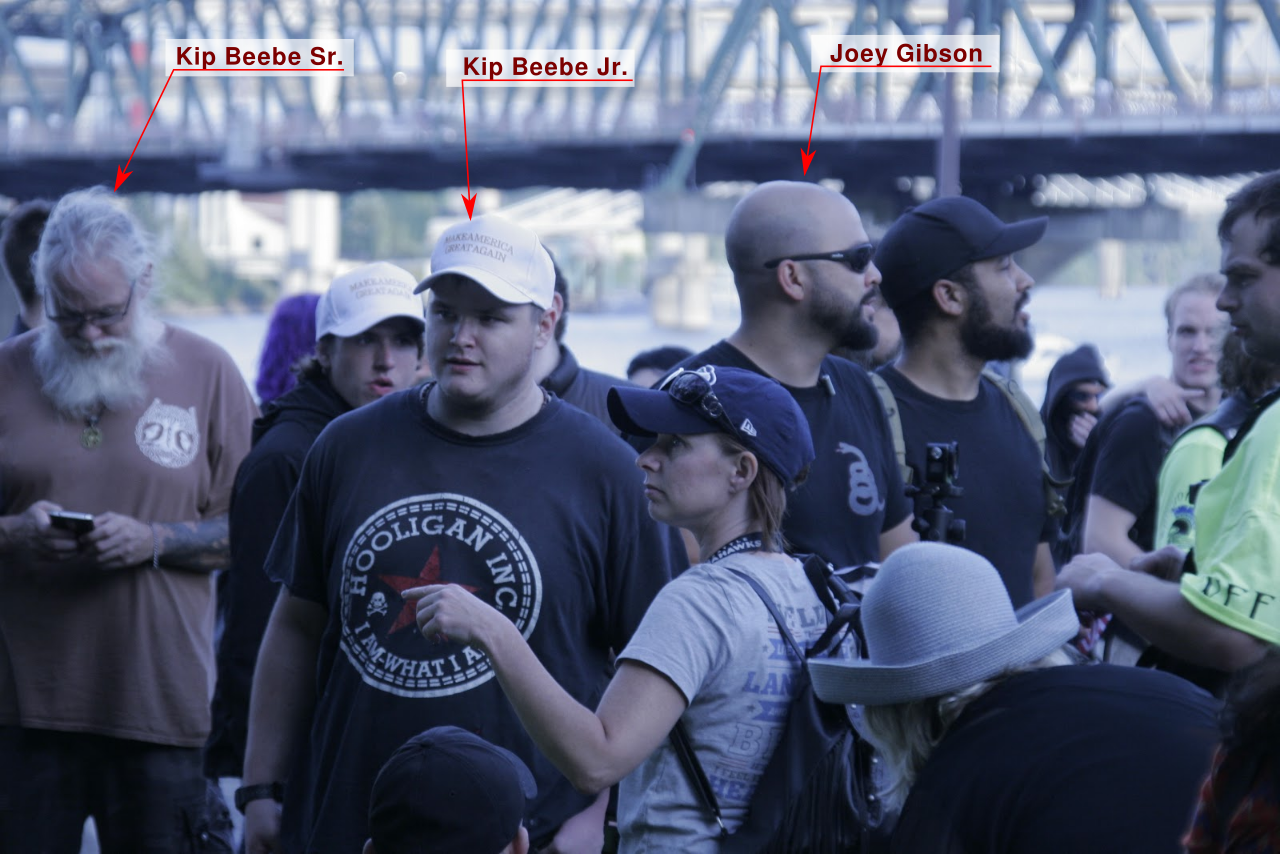 Kip Beebe Jr. in a “Hooligan Inc” T-shirt, with Kip Beebe Sr. on the left looking at his phone, at one of Joey Gibson’s waterfront events in Portland. 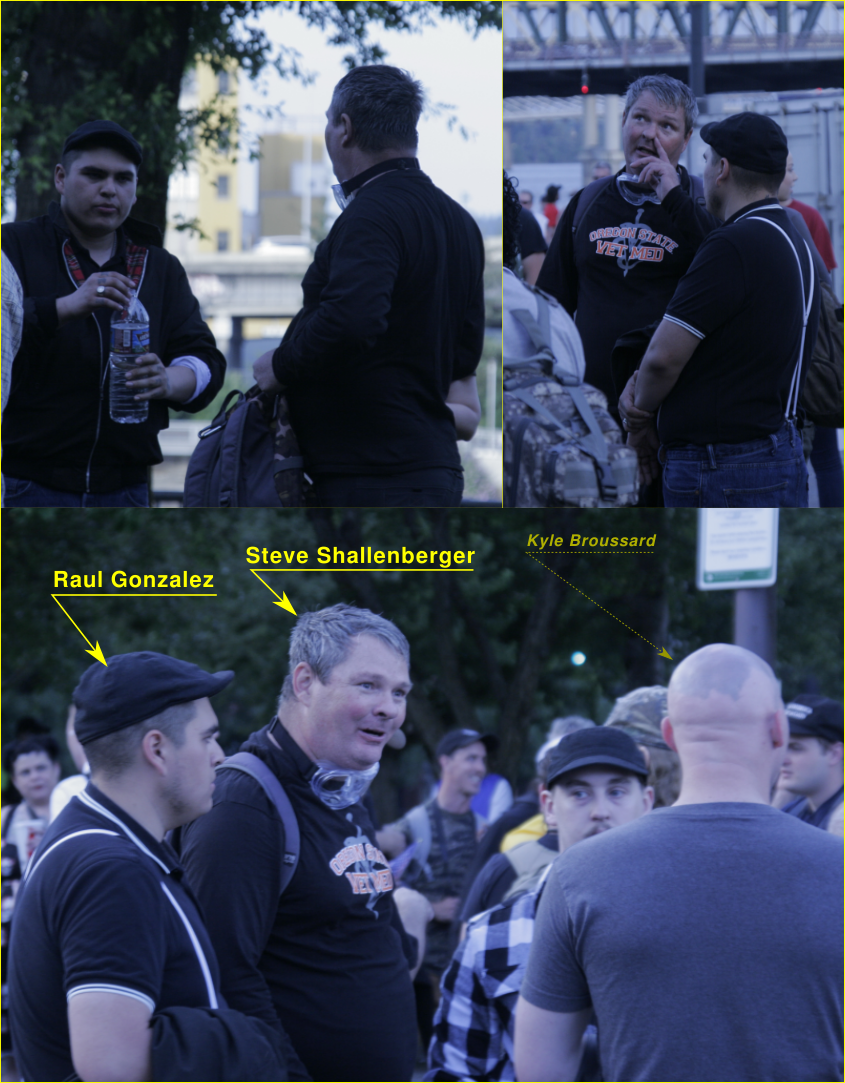 Shallenberger and racist skinhead Raul Gonzalez at one of Joey Gibson’s events. It is believed that they traveled to this event together.

Because they know the community’s distaste for fascism, many like Shallenberger, Beebe Sr. and Beebe Jr. use the patriot movement as a cover, waving American flags in public, but building neo-nazi networks in private. An American flag volknut symbol, for example, can be explained away as “merely pagan religion and patriotism,” rather than a dog-whistle of ethno-nationalism. However, what they cannot hide is their violence, both in the past, and in the present. As we have been reporting for months, these three are nowhere close to being the only fascist hiding in plain sight at Patriot Prayer events, using them as an excuse for organizing, and for physically attacking anti-fascist activists. And Gibson is the perfect tool for them. His rallies are not crawling with white nationalists, neo-nazis, white supremacists, and violent bigots simply by accident. Gibson has opened the door to their ideas, ignoring the distasteful elements, and keeping those that draw him followers and supporters. The politics enunciated by Gibson and other far-right movement celebrities who have arisen in the servile shadow of Trump’s campaign and presidency are steeped in racial resentment, overt misogyny, and open disdain for working class people organizing mutual aid against the rise of fascism. Joey Gibson publicly denounces white supremacists in front of a microphone, but marches with them, defends them, takes selfies with them at his rallies, and targets anti-fascists with violence. His disavowals are meaningless. His actions are what counts.

Stand with Rose City Antifa against Patriot Prayer’s fascist organizing on September 10th. If you have any information about these or any other fascists in the Portland area, email us at [email protected].