This article identifies Richard James Flannery of Central Point, Oregon as Patriot Front member “Alexander-OR” (PF-109720). Since joining Patriot Front at the beginning of 2021, Flannery has worked with other Oregon members in spreading the group’s fascist, white supremacist promotional materials throughout the state. Alongside Patriot Front neo-Nazis from across the Pacific Northwest, Richard Flannery traveled to Olympia, Washington to vandalize an LGBTQ+ Pride mural in October 2021. He also traveled to the East Coast to march through D.C. chanting white nationalist slogans with over 100 other members of Patriot Front on December 4th.

Patriot Front was founded by Thomas Ryan Rousseau (Current Address: 1113 Crest Meadow Drive, Haslet, TX) as an offshoot of the neo-Nazi organization Vanguard America in the fall of 2017. The group formed shortly after the “Unite the Right” rally in Charlottesville, Virginia where members of Vanguard America marched with James Fields, the man who drove into a crowd of people and murdered Heather Heyer. The group promotes a white supremacist, fascist “American Nationalism” that does not shy away from the antisemitic propaganda espoused by Vanguard America. Patriot Front is one of the largest distributors of racist and antisemitic propaganda in the country today, both online and via fliers, stickers, and banners.

While Patriot Front is based in Texas, members have been active in the Pacific Northwest for the last few years. In January 2019, Patriot Front distributed threatening messages throughout a neighborhood in Olympia, Washington that read “Better Dead Than Red.” The group defaced a statue of York at Mt. Tabor Park in Portland in June 2021 as well as a community mural honoring George Floyd, Breonna Taylor, and Ahmaud Arbery the following month. There have been a number of lower profile instances of Patriot Front banner drops, stickers, and posters throughout 2021 in Portland and elsewhere in Oregon.

Patriot Front has also held several short “flash mob” type events where their members will briefly march through a city - often at night when there are no bystanders - while wearing khaki pants, polo shirts, and carrying American flags. These shortlived marches are often choreographed and utilize smoke bombs or other props to gain a few minutes of flashy video footage. Bystanders in Philadelphia chased off Patriot Front members when they briefly marched over the weekend of July 4, 2021. The most recent of these occurred on December 4, 2021 in Washington D.C.. In what is quickly becoming a pattern for the group, Patriot Front marched in full fascist “riot gear” up and down the Capitol Mall, but ended up leaving half their group to wait in the cold for over an hour for a ride after some of their U-Haul trucks encountered unspecified issues.

Immediately following their December 4th D.C. march, anti-fascist infiltrators within Patriot Front, along with researchers and groups across the country, began to publicly identify current members of Patriot Front, as part of an ongoing campaign to notify our local communities about neo-Nazis threats. Despite clear, ongoing security issues and informational leaks, Rousseau and the rest of Patriot Front’s leadership have pressed forward with hasty plans to join a rally being held by anti-abortion group “March for Life” in Chicago on January 8th, 2022. Back in 2015, Richard James Flannery’s Facebook page featured mainly pictures with friends and family, as well as anime and My-Little-Pony-themed fan art like the post featured here.

Like many young white men radicalized during Trump’s presidential campaign and term in office, Richard James Flannery may not have publicly expressed any racist or far-right views prior to his support of Trump. Facebook posts going back as early as 2015 suggest Flannery’s predominant interests at the time were anime and My Little Pony. While neither of those fandoms is inherently tied to fascist ideology, both have often been popular among users on anonymous forums like 4chan, which have fostered extensive far-right radicalization over the past eight or more years. Richard James Flannery posted this additional Facebook photo on the day of the 2018 Jackson County Young Conservatives event. It shows Flannery wearing semi-formal clothes, sunglasses, and a Trump-Pence baseball cap. Some of his Facebook friends have commented on the photo expressing dismay and disagreement with his choice to wear a Trump hat.

At the moment we lack substantial data regarding Flannery’s political views and activity between 2018 and late 2020. Based on messages in Patriot Front’s internal chats, we do know that by late January 2021, Richard James Flannery had applied, and been subsequently vetted and accepted as a full member of Patriot Front.

After formally joining Patriot Front, Richard James Flannery—using the pseudonym “Alexander-OR”—joined a few of his fellow Oregon-based Patriot Front members in their efforts to spread PF’s fascist and bigoted propaganda throughout Southern and Central Oregon. Richard Flannery also specifically requested permission from his network director John-WA to also post “Nationalist Lifestyle” stickers in his local area, alongside Patriot Front material. The “Nationalist Lifestyle” slogan is associated with the neo-Nazi lifestyle brand(s) founded by Robert Rundo, former member of the violent fascist group “Rise Above Movement,” or “RAM,” currently living in Serbia where he collaborates with various Eastern European neo-Nazi groups. Richard James Flannery remarks on how much he enjoys specifically putting up Patriot Front flyers featuring fascist propaganda in the communities of Southern Oregon.

Such extensive propagandizing, all carried out by a very small number of individuals, is a core feature of Patriot Front’s overall organizational strategy, which is intended to give a falsely-inflated impression of their size and influence. Patriot Front leadership demands that members “hit” as many individual towns and areas as possible each time they go out to post propaganda, even encouraging lengthy trips where one or two members post material in areas where Patriot Front has no actual physical presence. The resulting thin spread of propaganda reflects Patriot Front’s focus on radicalizing and/or intimidating the largest number of people possible, while taking on the least possible degree of risk themselves–an attitude that long ago earned them the nickname “Patriot Stunt.”

Having thoroughly bought into this strategy for spreading fascism, racism, homophobia, and anti-immigrant beliefs, Richard James Flannery would continually promise his Patriot Front superiors in internal chats that he always posted his “promat” (“promotional materials,” in Patriot Front lingo) in as many communities as possible. 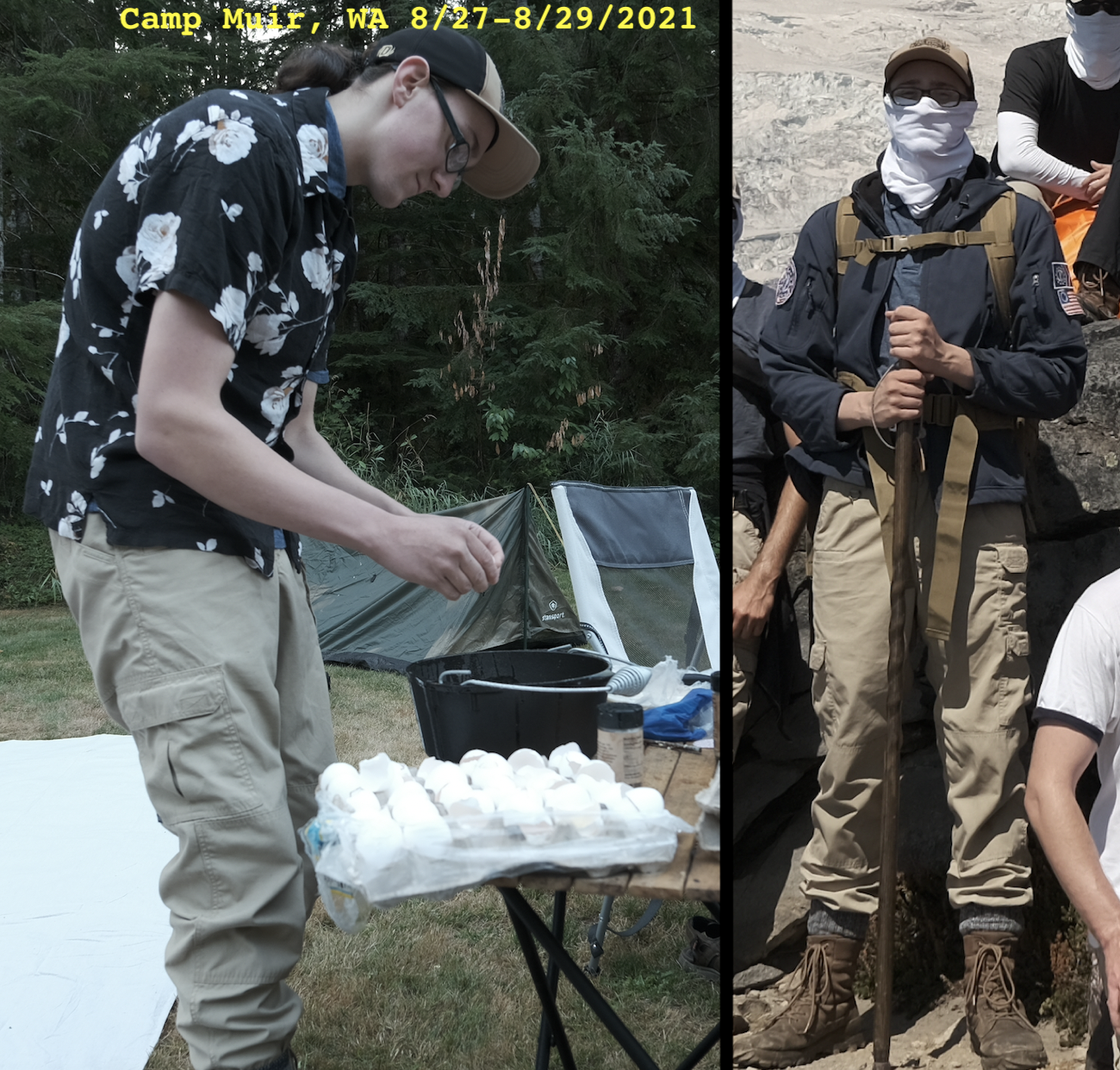 The above photos were taken of Richard James Flannery during a Patriot Front camping and hiking trip he attended at Camp Muir, WA from August 27th, to August 29th, 2021. Also present on this trip were other Patriot Front members from Oregon, Washington, Idaho, and California, including recently-exposed members James Julius Johnson and Lawrence Alexander Norman.

Alongside his constant chauffeur, Lawrence Norman (aka Frederick-OR), Richard James Flannery attended a few larger Patriot Front actions and private gatherings ouside Southern Oregon during 2021. In late August 2021, Flannery, Norman, and other Patriot Front members from Washington, California, and Idaho gathered at Camp Muir, WA to camp. They also staged a series of posed group photos in the nearby mountains (with some hiking in between).

On October 16, 2021, Flannery joined a number of other Pacific Northwest Patriot Front members (including Lawrence Norman, James Julius Johnson and Jacob Stephen Sundt) in Olympia, WA to vandalize a gay Pride mural with the group’s own white nationalist slogans. The mural, which featured a rainbow and the words “Respect & Love Olympia,” was created in response to a spate of violent anti-gay hate crimes. Following their act of neo-Nazi vandalism, the Pacific Northwest Patriot Front members gleefully celebrated their success in internal chats, mocking LGBTQ+ community members’ pain, and declaring their intent to continue committing similar acts of hate going forward. Recordings and photos taken during the mural vandalism clearly show Richard James Flannery spray-painting over the mural, then applying fascist Patriot Front stencils on top. These stills from Patriot Front videos documenting their night of homophobic vandalism in Olympia, WA clearly show Richard James Flannery, wearing a distinctive yellow baseball cap, helping his fellow fascists practice their stenciling at a separate location before proceeding to the mural.

In these stills taken from video of the actual mural vandalism in Olympia, Richard James Flannery can be identified by his yellow baseball cap among the other Patriot Front members present. During the course of the video, he can be seen covering up the LGBTQ+ Pride mural with spraypaint and white nationalist stencils.

Flannery–along with the majority of Pacific Northwest Patriot Front members–flew to the East Coast from Seattle in order to participate in Patriot Front’s march down the Washington D.C. mall on December 4th, 2021.

Richard James Flannery’s contributions in Patriot Front’s internal chats–on their own server and on Telegram–make clear that he has fully embraced everything that comes with membership in a fascist organization like Patriot Front. Flannery doesn’t hesitate to join his fellow Patriot Front members in posting “white power” graphics, like the one shown below, which Flannery posted to Telegram, and which features both a swastika and the neo-Nazi slogan “1488.” Three screencaps show Richard James Flannery’s Telegram account, which he operated as “Alexander-OR” (his Patriot Front pseudonym), Flannery engaging in action planning with fellow PNW Patriot Front members in a small private Telegram channel titled “Activists for Columbia,” and Flannery posting a “White Power” graphic to that chat, featuring both a swastika and the neo-Nazi slogan “1488”.

A simple survey of the Patriot Front’s internal chat activity makes it immediately clear that an atmosphere of smug, yet desperate, bootlicking pervades virtually every part of life within Patriot Front. A large number of rank-and-file Patriot Front members, for example, unironically address Thomas Rousseau–a short, pretentious 23-year-old in a cowboy hat–as “Sir” in everyday conversation. Screencaps of Patriot Front internal chat messages from Richard James Flannery, all of which feature Flannery compulsively sucking up to his network director, “John-WA.”" Regardless of the topic of conversation, whether it be Skyrim or the merits of fascist government, Flannery finds a way to make sure “John” always has someone to feel superior to.

Richard James Flannery’s interactions with his immediate superiors within Patriot Front, as well as his attitude towards Rousseau, are perfect examples of this fascist organization’s internal culture. Flannery’s own chat activity suggests that he puts nearly as much effort into being Network Director John-WA’s personal “Reply Guy” as he does into posting propaganda. And despite having spent most of his life sporting short hair and watching “My Little Pony,” Richard Flannery’s most-recent Facebook profile picture resembles nothing if not a quirky Thomas Rousseau cosplay, complete with shoulder-length locks, neckerchief, and cowboy hat.