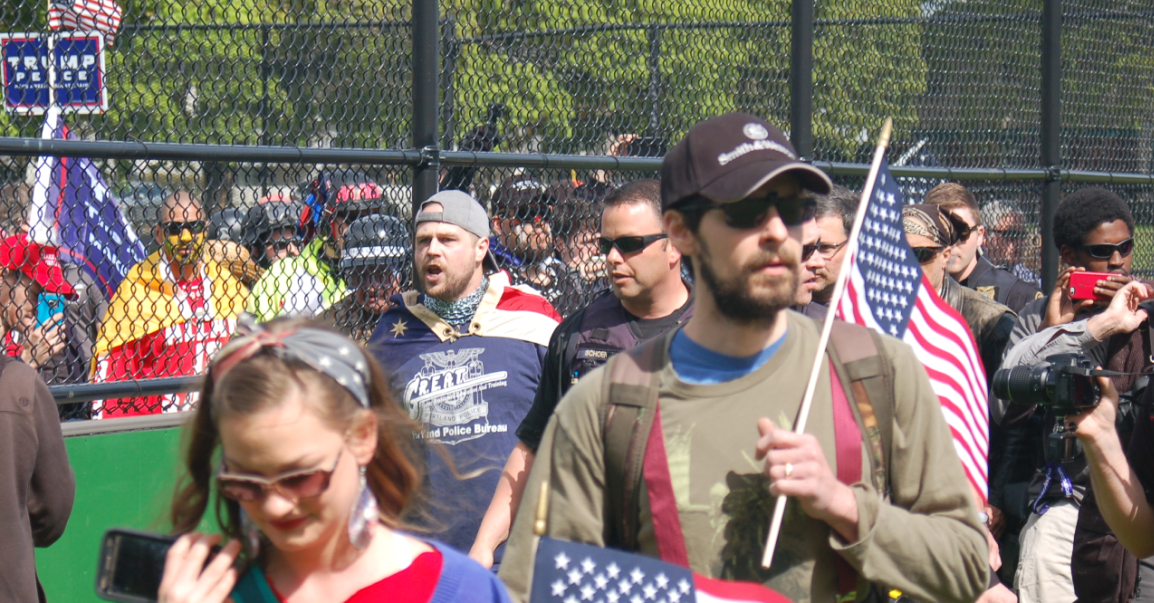 Joey Gibson made his first big splash in Portland on April 29th of 2017 by marching through the Montavilla neighborhood in a far right wing mob which included sieg heiling neo-nazis. This “March for Free Speech,” predicated on hyped up fears of supposed leftist violence based on a single mysterious email, also left white supremacist propaganda pasted up on 82nd Avenue, the main street of the immigrant Montavilla neighborhood.

Disgraceful as that was, less than a month later on May 26th, this event retroactively gained new significance as one of the march’s neo-nazi attendees viciously stabbed three people, killing two (Ricky John Best and Taliesin Myrddin Namkai-Meche), aboard a MAX train after they attempted to interrupt his racist and Islamophobic attacks on two young women of color. The alleged murderer, Jeremy Joseph Christian, had thrown sieg heil salutes and physically threatened anti-fascist counter-protesters with a bat at the April 29th Montavilla rally. It is important to note that Christian also participated extensively in Patriot Prayer’s facebook comment threads prior to the event, often spewing overt neo-nazi rhetoric. A number of leftist commenters called out this fascist language, but Patriot Prayer’s followers were content with either ignoring or endorsing his behavior. 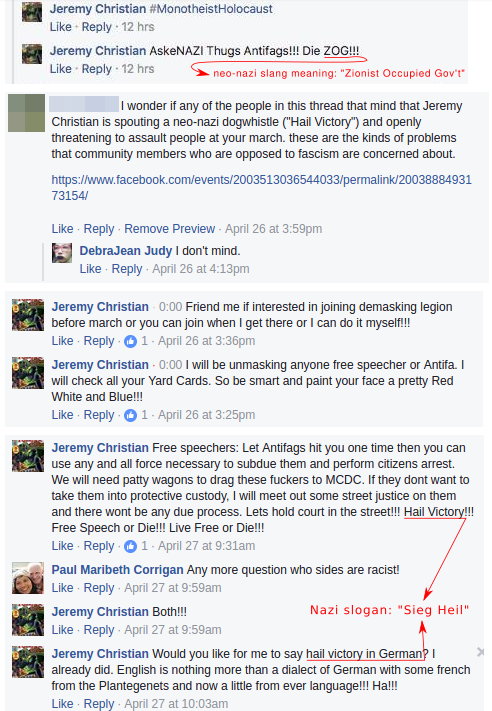 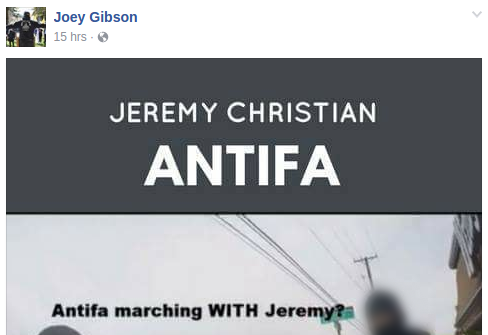 In the aftermath of the Max stabbings, Joey Gibson tied himself in knots attempting to distance himself and his nascent movement from the killings. At various points, Gibson insisted that Jeremy Christian was a leftist “bernie bro” and even on occasion “antifa”. At the time of the stabbings, Joey had already scheduled another rally for June 4th, to which he invited well-known white nationalist and anti-semitic speakers from around the country into the heart of downtown Portland. Amid massive community outcry against a not-even-crypto fascist rally being held in the immediate aftermath of neo-nazi slayings, Joey deigned to offer that he would consider cancelling the rally if MAX attack victims’ families requested that he do so. Janis Heater, grandmother of the sole survivor of the stabbings, Micah Fletcher, took Joey up on this offer and asked that the rally be shut down. In a not-so-shocking display of his absolute lack of decency and compassion, Joey ignored this request and refused to cancel. The resulting racist and anti-semitic June 4th Patriot Prayer rally, which we have covered extensively, was swamped with controversy, crawling with white supremacists and fascists, and outnumbered by a factor of at least 10:1. 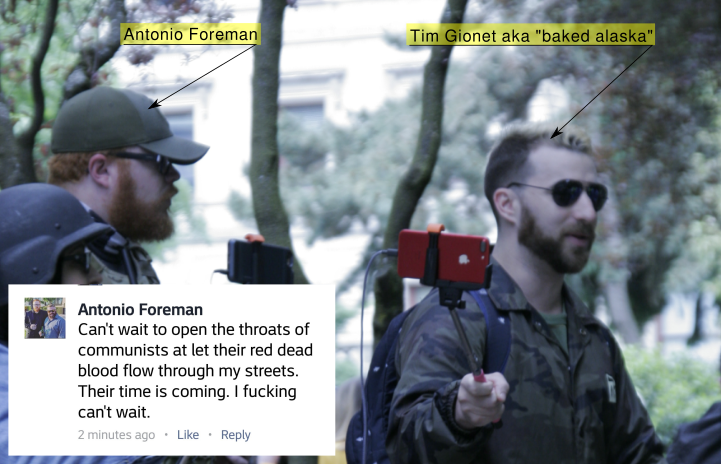 Fast-forwarding six months requires us to skip past nearly a dozen subsequent Patriot Prayer rallies (not a single one of which did not serve as an organizing platform for white nationalists, neo-nazis, or other violent white supremacists in attendance), dozens of revelations regarding Joey Gibson’s opportunistic and often-witless collaboration with contemporary insurgent fascist movements, and the nazi rally in Charlottesville (organized by Joey Gibson’s alt-right friends and associates) which wounded many people and murdered Heather Heyer; but we arrive at the events of October 8th, 2017. After a humiliating incident on September 10th wherein months of planning culminated in Joey being too afraid of massive community response against his nazi-enabling rally to even show his face at his event in Portland, he decided to take a different approach: zero notice. On Saturday, October 7th, Joey announced that he would be holding a rally and march in downtown Portland on the following afternoon in Terry Schrunk Federal Plaza, the same location as his June 4th rally. 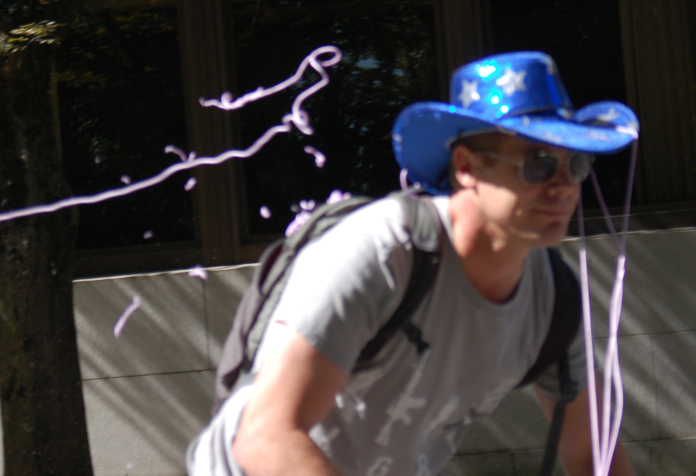 Anti-fascists mobilized to oppose Joey’s rally, which once again included white nationalists such as Allen Pucket. The short notice seemed to work mainly in favor of the (permanently mobilized) police, who outnumbered both Patriot Prayer and the anti-fascists who came out to defend their community from the well-established pattern of white supremacist aggression facilitated by Joey Gibson’s rallies. The far right group was blocked, stymied, drowned out with artisanal hand-wrung cowbells, and frustrated nearly to the point of tears before cops inexplicably took notice of Jay Bishop in Patriot Prayer’s midst. Terry Schrunk is a federal park, and there had been multiple reports of police searching people for weapons or contraband as they entered its boundaries; when police searched Jay Bishop, they found a Ruger Charger rimfire pistol with 15 & 25 round clips. As Bishop was arrested, local journalist Mike Bivins identified him as a local character known for wearing a fox hat, but more recently known for having given an interview to Bivins at a “March For Truth” on June 3rd (just prior to Joey Gibson’s massive June 4th rally) wherein he expressed support for neo-nazi and alleged MAX murderer Jeremy Christian, and went on to say of stabbing victims Best, Namkai-Meche, and Fletcher: “these three people that died or were stabbed are not heroes, they’re not anybody to be idolized, and they deserved everything that they got.” 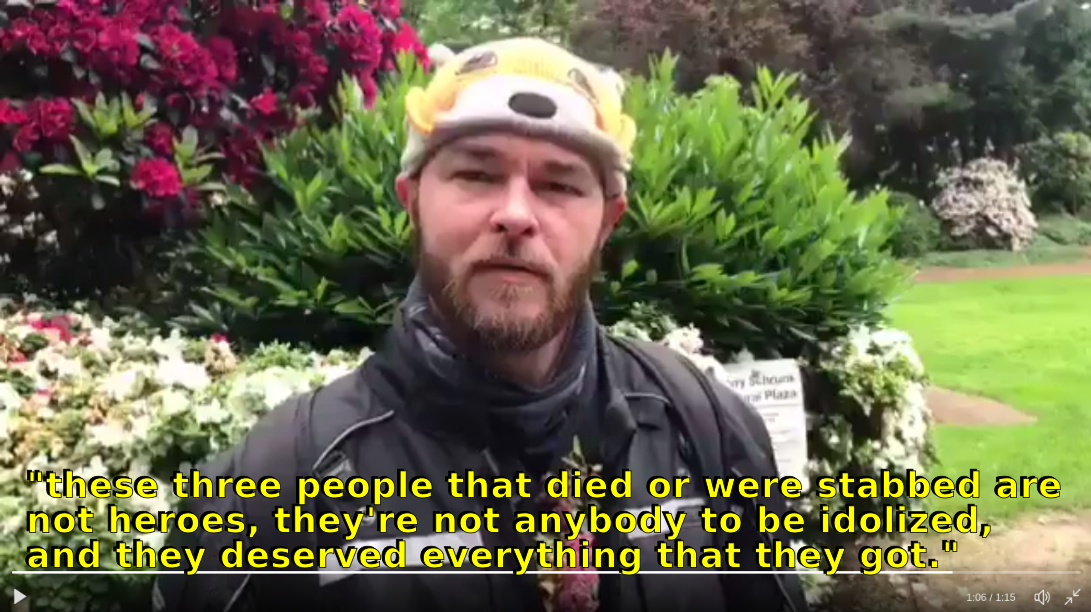 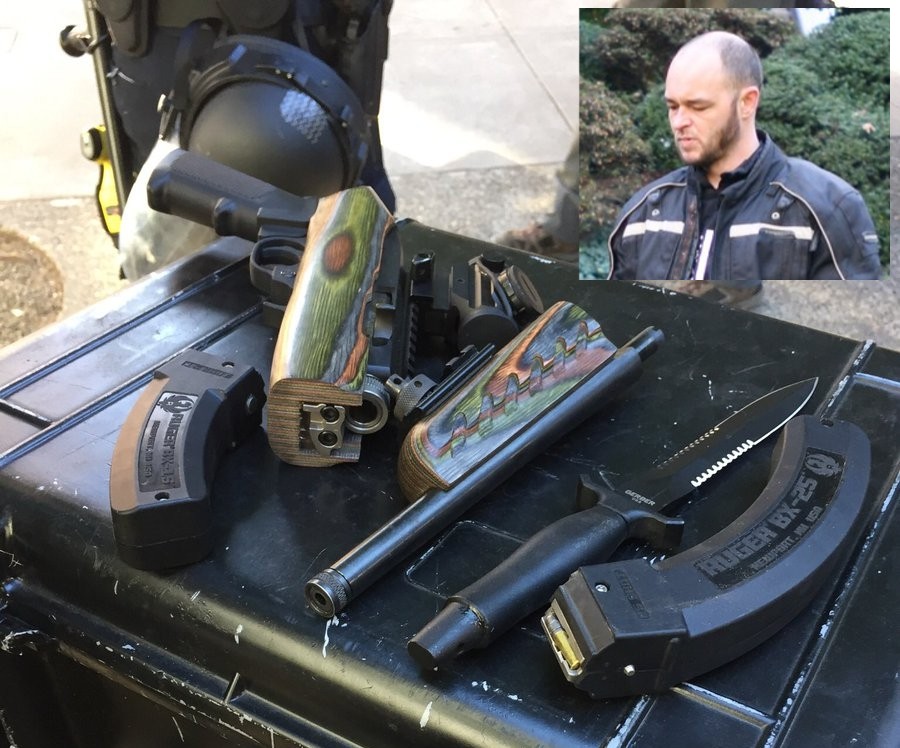 Weapons brought by Jay Bishop to a Patriot Prayer rally.

While Bishop was not the only person to express support for a neo-nazi murderer at or around Joey Gibson’s 6⁄4 hate rally, it is obviously both striking and alarming that he was drawn to participate in a Patriot Prayer rally (the same organization which drew Jeremy Christian’s attendance) four months later, this time himself armed with lethal force.

At this point, incredibly, the fractal creepiness of October 8th’s events had not yet reached their culmination. To restate: a supporter of a murderous neo-nazi Patriot Prayer supporter attending a Patriot Prayer rally armed for murder was perhaps not the last worrisome moment of the day. During one of his many “speeches” during the event, Joey mentioned that he would be attending the Montavilla neighborhood association’s meeting the following day. 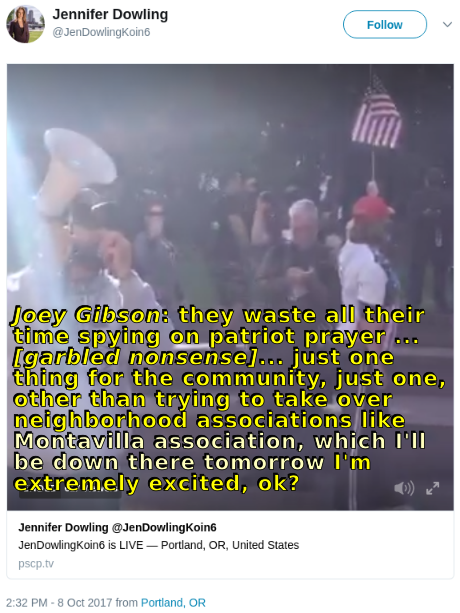 By no coincidence, this meeting of the Montavilla Neighborhood Association on October 9th happens to be an election for its board. Both members of the association and running candidates report receiving bizarre harassment from a faction of the association which opposes the rights of houseless people, and is allegedly also affiliated with the Patriot Prayer group. If Joey Gibson returning to the site of his first major incursion (alongside sieg heiling neo-nazis) into Portland for the purposes of disrupting the electoral process of a neighborhood association doesn’t seem quite shameful enough, perhaps it would help to add that Micah Fletcher, the sole survivor of the Max attack, is one of the candidates whose bid Joey will be interrupting.

To recap: April 26 - April 29, 2017: Jeremy Christian, a neo-nazi, participates intensively in Patriot Prayer comment threads and also attends a rally in the immigrant Montavilla neighborhood where he throws sieg heil salutes and threatens counter-protesters. He continues to participate in Patriot Prayer comment threads until May 26th. May 26, 2017: Jeremy Christian allegedly stabs three people, killing two, on the Portland MAX train while spewing Islamophobic threats. May 31, 2017: Joey states that he would consider canceling a scheduled Patriot Prayer rally featuring anti-semitic & white nationalist speakers if family members of the train stabbings requested that he do so. June 1, 2017: The grandmother of the sole survivor of Jeremy Christian’s alleged murders requests that the scheduled rally be canceled. Joey refuses to cancel. June 3, 2017: Jay Bishop is filmed expressing support for Jeremy Christian’s alleged murders and denigrating the people he stabbed. October 8, 2017: Jay Bishop is arrested after carrying a gun and a good deal of ammunition into a federal park at a Patriot Prayer rally. October 9, 2017: Joey Gibson plans to disrupt the electoral process of the Montavilla neighborhood association where the sole survivor of neo-nazi and patriot prayer attendee Jeremy Christian’s alleged murders is running as a candidate for the board.

Joey decides not to disrupt the Montavilla Neighborhood Association, but refuses to miss an opportunity to call community members who stand together in opposition to his de facto nazi marches “extremists”.

As of this morning, Joey Gibson has announced that he will not be attending the Montavilla Neighborhood Association meeting tonight. However, as our above reporting shows, he cannot be trusted to keep to his word. If you are a resident of the Montavilla neighborhood (map here) we encourage you to attend this meeting.