Anti-fascist activists from Rose City Antifa, Pacific Northwest Anti-Fascist Workers Collective, and Eugene Antifa have been able to get access to the logs of a Discord server used by a variety of Pacific Northwest fascists and white supremacists, given the tongue-in-cheek name, the Cascadian Coffee Company (CCC). Discord is a chat app, originally developed for online gaming, but often used by the far-right and white supremacists groups to organize their groups and events. These logs contain thousands of messages detailing activities, organizing, and interactions of one particular bunch in the region. In an ongoing series of articles, the coordinating anti-fascist groups will publish revealing information about this particular set of Nazis organizing throughout the Pacific Northwest region, located from Ashland to Seattle. You can follow all of these stories by visiting our website at rosecityantifa.org, or following us on Twitter @rosecityantifa and using the hashtag #PNWfascistlogs and #CCC.

Rose City Antifa has been able to get a good look at the tactics of these particular Nazis, which should help anti-fascist activists throughout the Northwest in combatting and countering their efforts.

The main goal of the Oregon Aryans is propaganda, pure and simple. Their notion of what constitutes success is how much media coverage their actions generate. Their propaganda has two main facets: first, to anger liberals and anti-fascists by being racist in plain sight; and second, to draw sympathetic and allied racists and white supremacists to their cause.

David Woods (Australopithecus Jordan) wants to recruit new members to the group, because there are only two of them in his town.

Being fascists, they are obsessed with displays of strength, and feel this is the most powerful propaganda there is. This occurs in two main ways: by having a strong organization, and by intimidating the at-risk communities that are their targets. Historically, fascists fail to have strong organizations, being susceptible to demagoguery and in-fighting, while attracting participants whose ideological disposition allows them to be impressed by these sort of dangerous and anti-social performances. In a grasping attempt to balance this lack, fascists tend to pour their energy toward the second path: violence and intimidation towards at-risk communities. They seek to create an environment of fear in the absence of an environment of control. 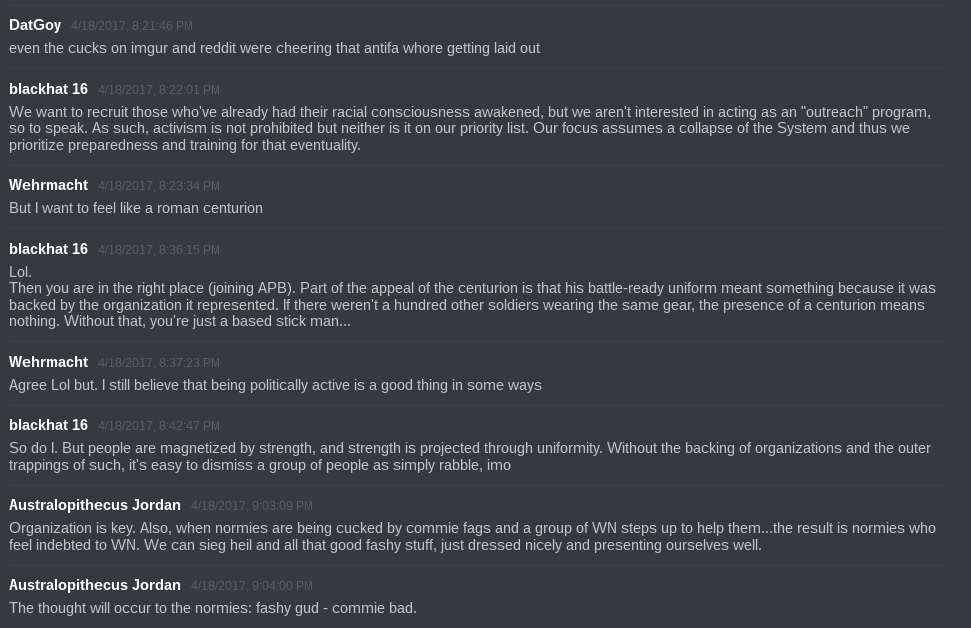 One of the main ways they conduct their propaganda efforts is with fliers. Justin Marbury was arrested putting up Nazi fliers in Ashland in January of 2017. He has a very high opinion of himself, and thinks his posters are attracting a lot of attention.

Marbury seems to think that leftists will be cajoled into becoming nazis with references to Hitler’s “social policy.”

They feel that their posters make their organizations seem larger than they are. 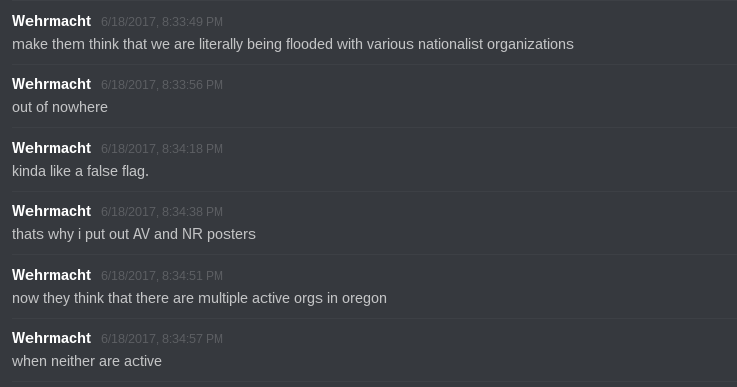 Marbury admits to creating posters for groups that don’t exist in Oregon, so people will think that they are active here.

There is some debate about what the posters should say, however. Some feel they should push a more hardcore nazi angle, to appeal to white supremacists. Others feel they should start slower, recruiting far-right nationalists, and then eventually bringing them over to a more racist politics.

This disagreement was the core of an argument between members of Atomwaffen Division (AWD) and the Oregon Aryans. AWD tends to use more overt nazi imagery in their propaganda. Khimære, one of the CCC Discord users, claims to be behind all or most of the AWD propaganda released nationwide.

After chiding Marbury for not using swastikas on his posters, the AWD member then calls Marbury a reactionary. 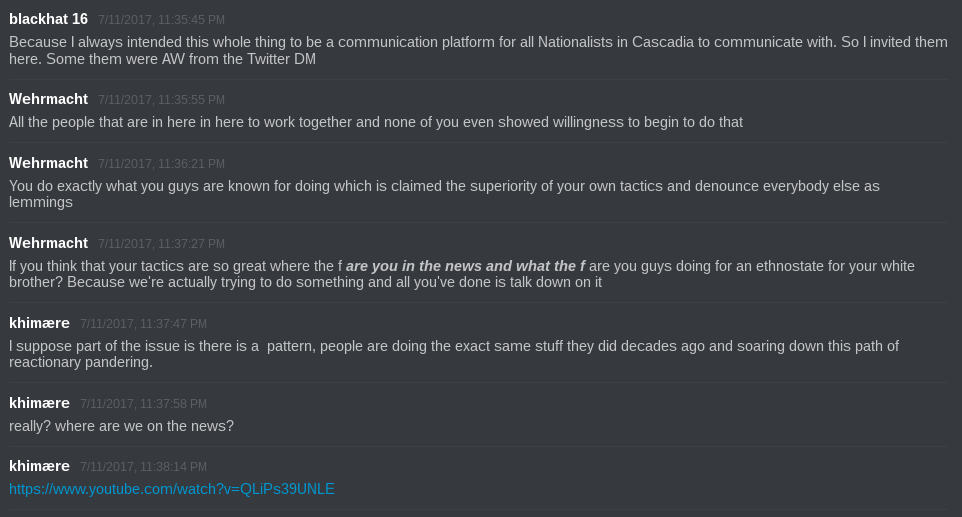 Then David Woods jumps in, and they argue for a long time. 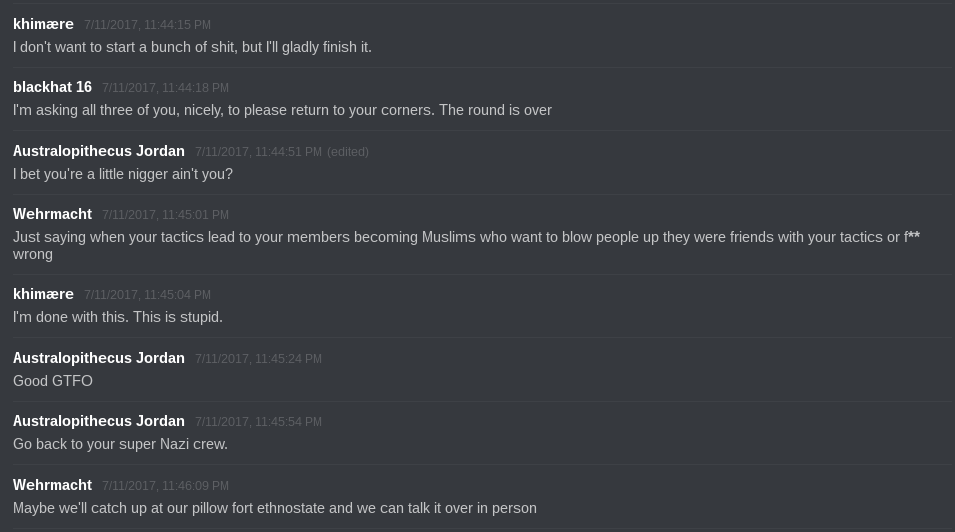 The Oregon Aryans spend much of their time debating over tactics, and the exact design of their posters, stickers, and apparel items. When deciding what sort of flag to use, hundreds of posts are made critiquing the colors, shapes, and exact fascist imagery that should be used. They bicker about what sort of uniform to wear, and never even come to much of a conclusion. 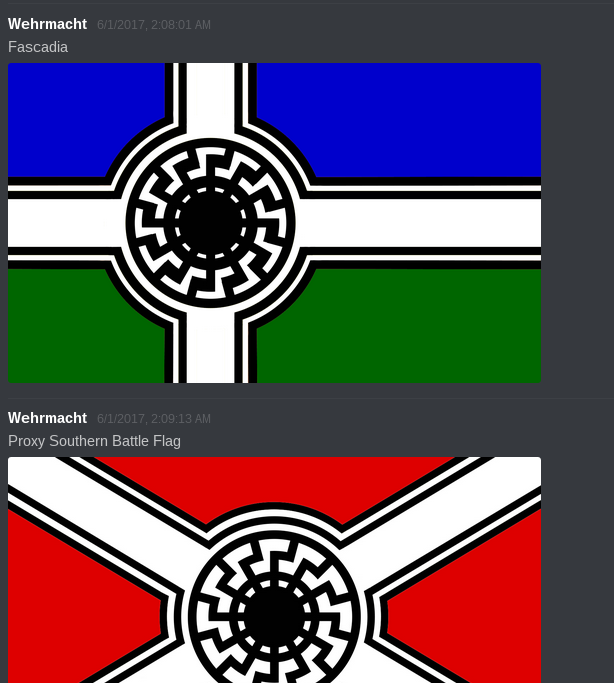 A few of the many designs for the Central Oregon Aryans’ “fascist Cascadia” flag. Others not posted for reasons of tedium. They ended up going with something like the top version.

Jimmy Marr get apoplectic in describing his distaste for the fasces symbol.

David Woods describes the sonnenrad (the symbol in the center of the two flags, above) as their “generation’s swastika”. 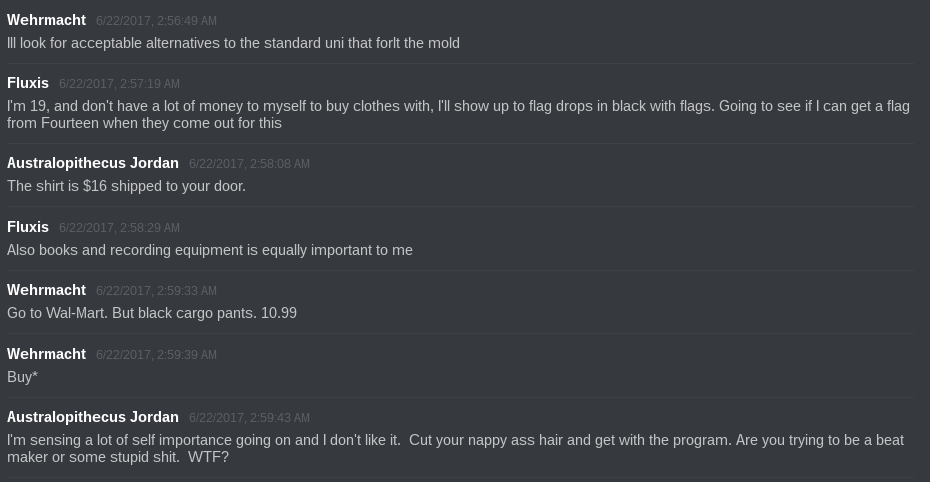 Because Jimmy Marr has a vinyl printer, the Oregon Aryans engaged in a number of banner drops over the summer, standing on overpasses over I-5 throughout Oregon and Washington, holding large banners with inside-joke racist slogans. These generated much more media attention than the posters, and the Oregon Aryans were beside themselves with joy at the response. David Woods (on left) and another member of the CCC Discord stand with an anti-Semitic banner in Jimmy Marr’s backyard. 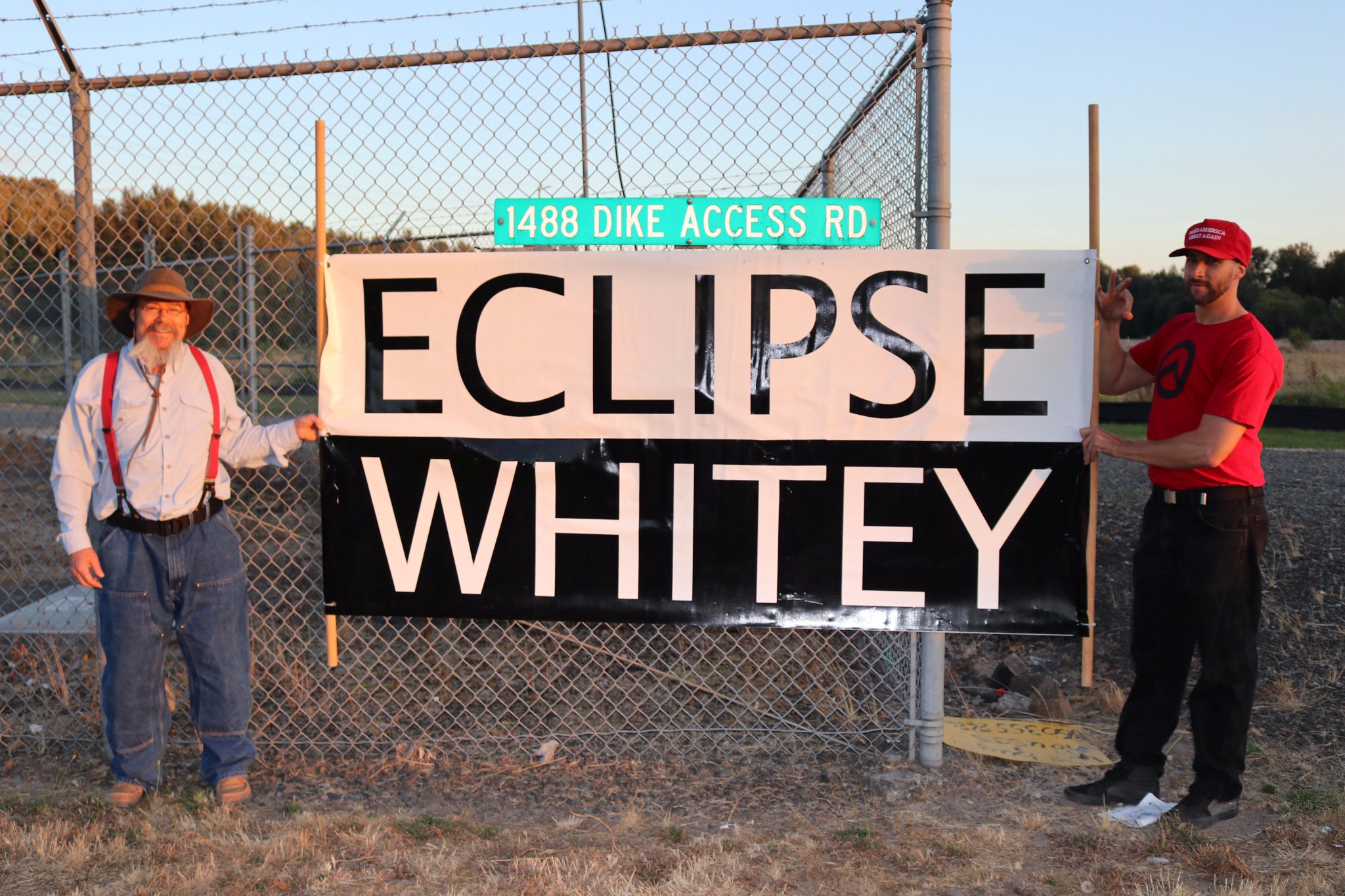 Jimmy Marr and David Woods stand with a banner in Southern Washington.

The Oregon Aryans have attempted to go out into public to create propaganda moments and draw media attention, but have not had much success. Although an April 20th visit to the University of Oregon campus in Eugene drew some media attention, a visit to an activist gathering in Corvallis on May 20th didn’t have nearly the same response. 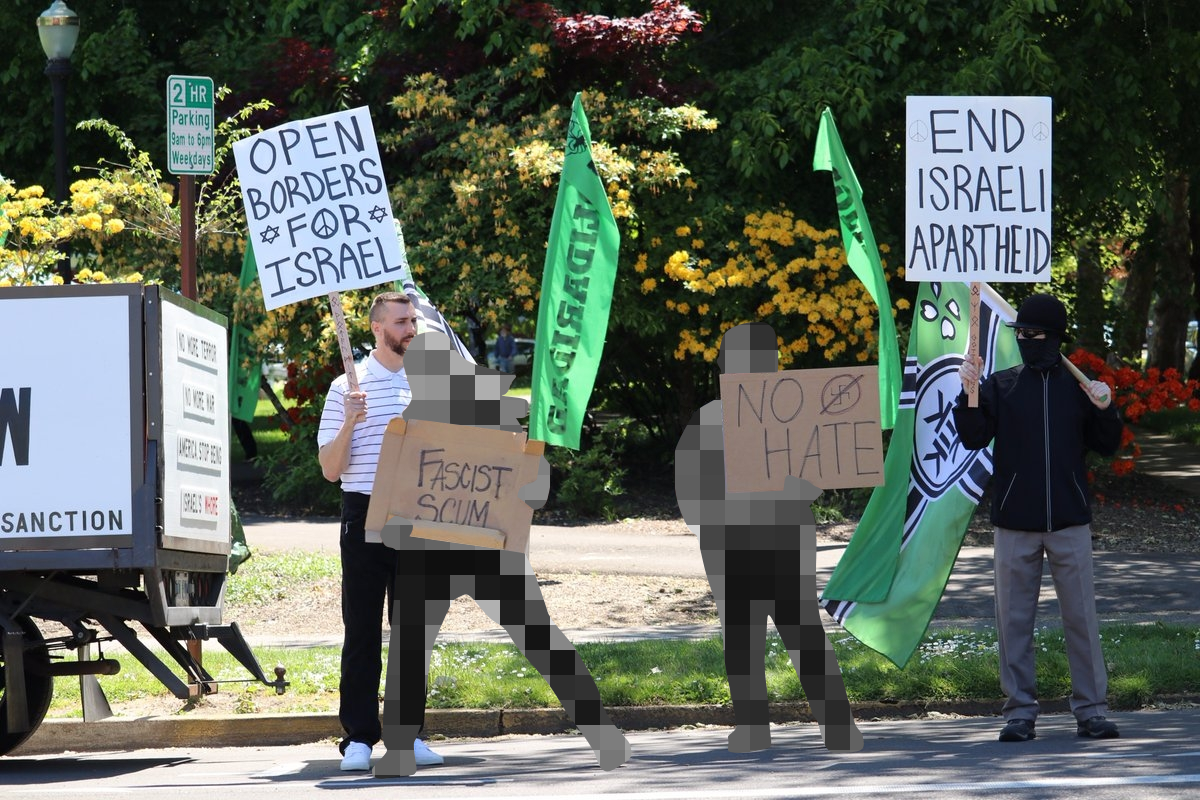 David Woods and another Oregon Aryans member are easily met by counter-protesters in Corvallis.

A number of the Oregon Aryans were at Joey Gibson’s April 29th event on 82nd Avenue. There, they were spotted and documented by Rose City Antifa. They saw RCA’s article, and commented on it.

After that, David Woods comments that he would rather not attend far-right rallies, because of the attention that they draw.

David Woods did not attend Joey Gibson’s next rally, although a number of other members of the CCC Discord did, and hung an anti-Semitic banner over I-205 in Portland on their way to the rally.

No such “flash rallies” have happened yet, but it is likely that this group of fascists will do whatever they can to gain more media coverage, while avoiding being intercepted by anti-fascists.

_Additional articles in this series:

If you have any additional information on any fascist and white supremacist activity, please email us._