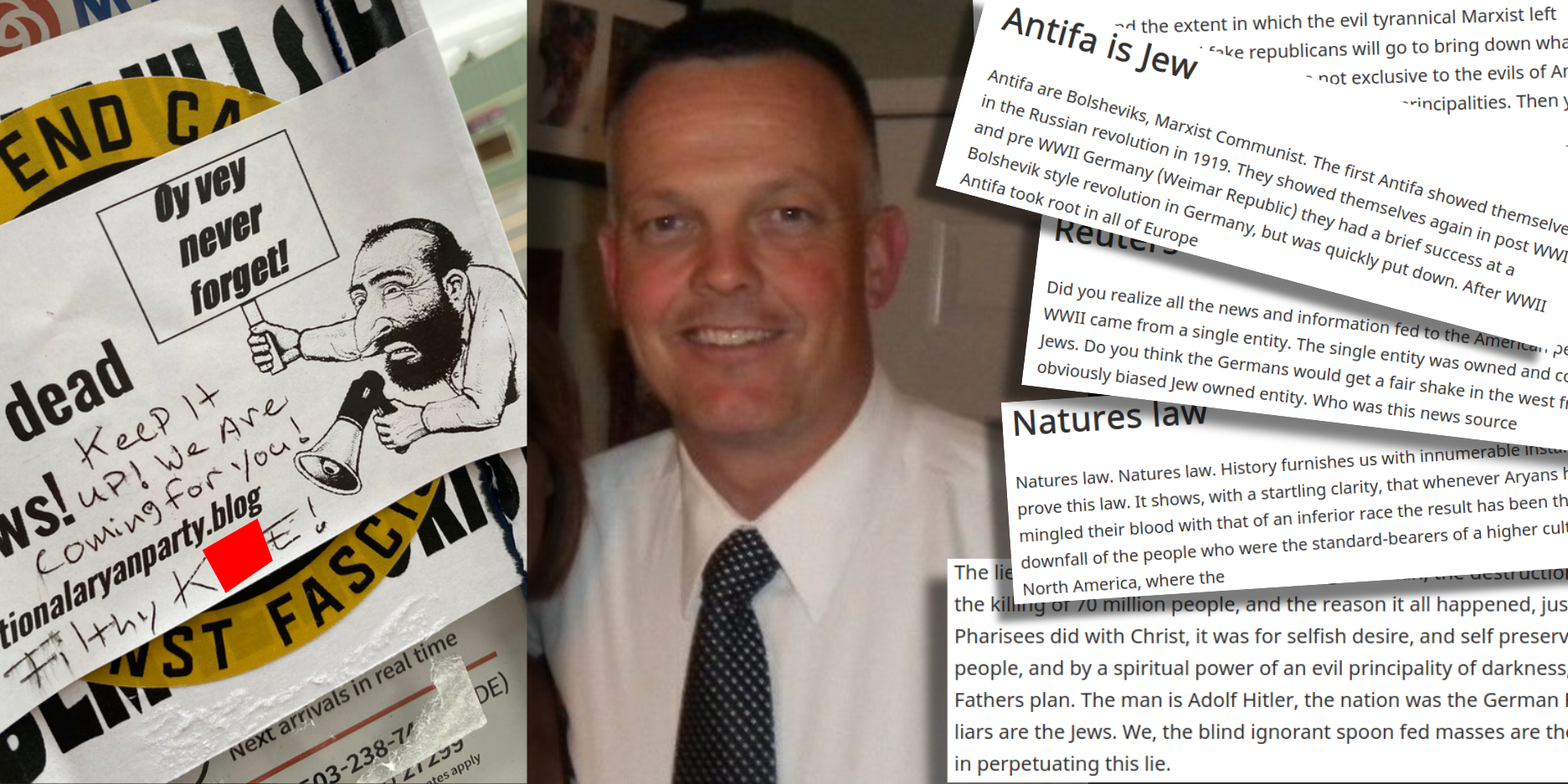 Our previous article on the neo-Nazi American Nationalist Aryan Party focused on Austin Lewis Miller, creator of the heinous stickers that littered the Foster-Powell neighborhood and owner of the now-defunct ANAP website. We have now identified the second, much more prolific, contributor to the ANAP website’s blog–a user going by “Mel Chizedek”–as Dane Garrett Bowen of Klamath County, OR. In addition to being an avowed National Socialist, antisemite, and hardcore Hitler fanboy, Bowen is also a former Air Force helicopter crew chief, a former Klamath Falls Police reserve officer, and, as of last summer, “Commanding Officer” of an Oregon chapter of the “III% Security Force.”

In addition to writing by Austin Lewis Miller, who posted under the pen name “nojewry,” the ANAP blog mainly featured screeds written by Dane Bowen under the pen name “Mel Chizedek.” The pen name appears to be a reference to Melchizedek, an obscure biblical priest/king also mentioned in the Book of Mormon, a religous text whose recent esoteric extrapolations have played important roles in the PNW militia movement. Bowen’s posts, while slightly less slur-laden than those written by Austin Miller, are even more extensive, repellent examples of classic Nazi propaganda and base antisemitism, with an added layer of Trump-era far-right conspiracy theory. Most of the posts on the site date back only as far as mid-October 2020, but in a short span of time Bowen authors multiple posts consisting either entirely or primarily of long quotes from Mein Kampf or from speeches/writing by other prominent Nazi figures like Alfred Rosenberg, all framed as deep insights into the current predicament of white American nationalists like Bowen and Miller. 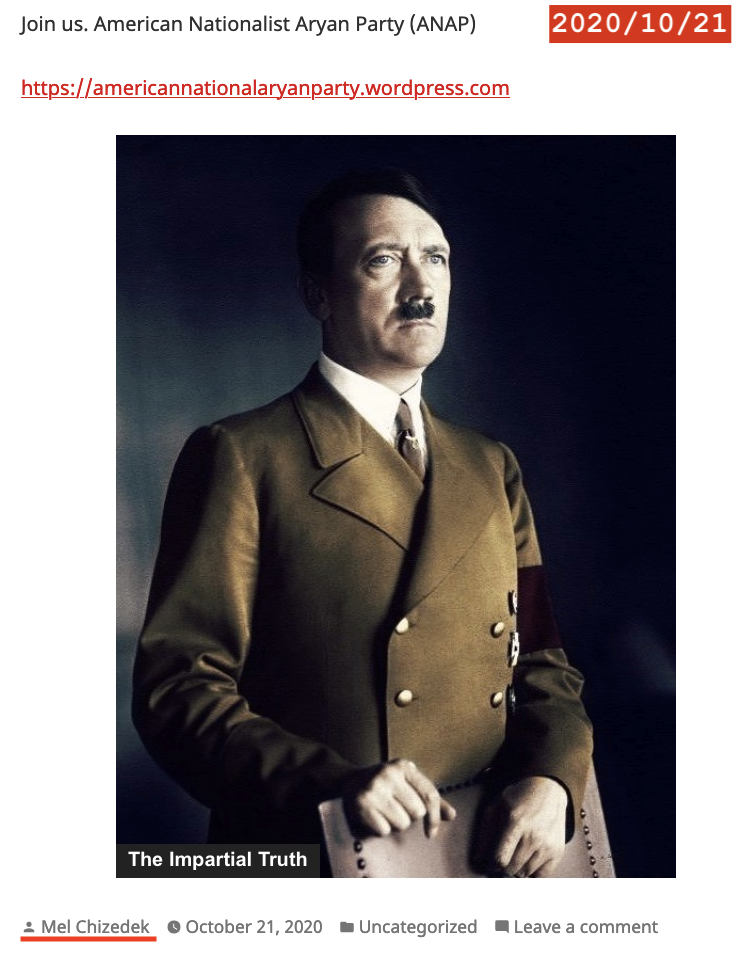 Dane Bowen, as “Mel Chizedek,” posts admiringly about Hitler in his contributions to the ANAP blog site. 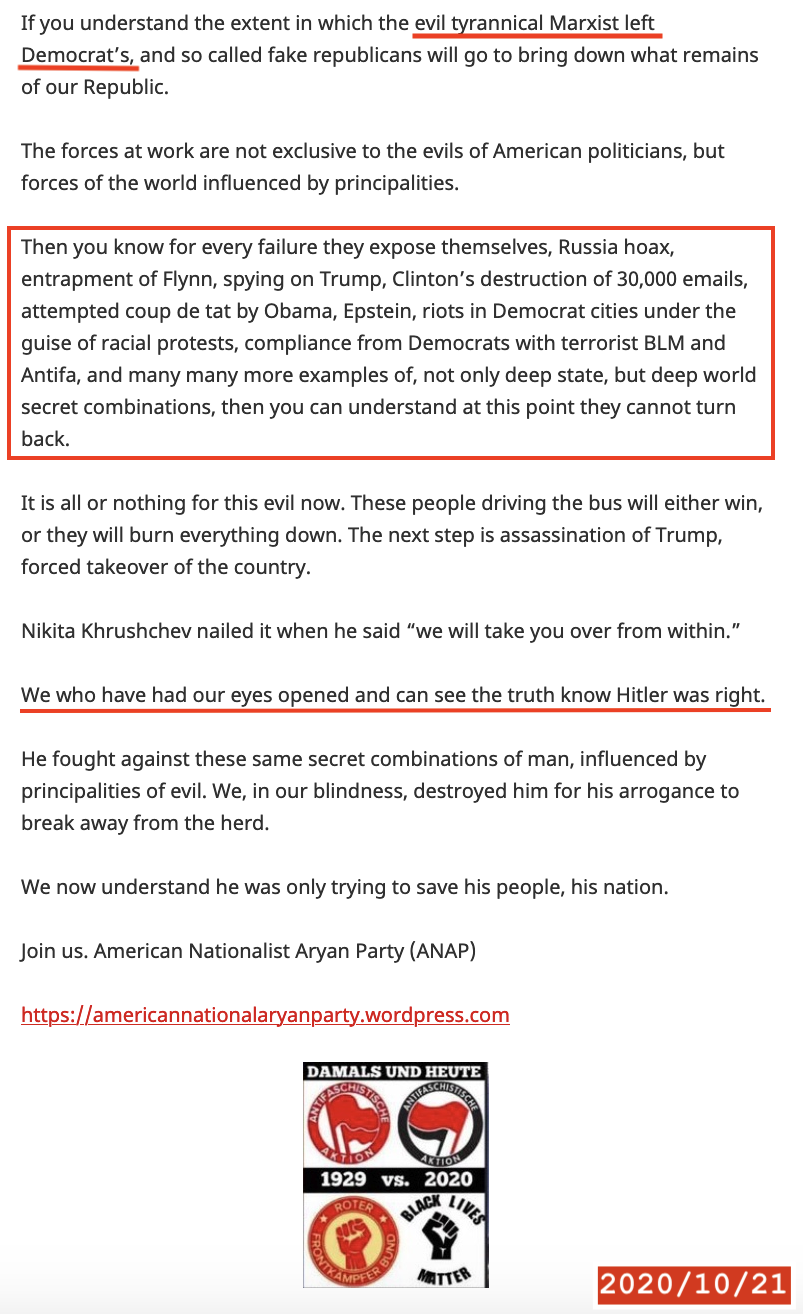 Dane Bowen, as “Mel Chizedek,” writes on the ANAP site that he believes in a slew of right-wing conspiracy theories regarding current US politics, and now thinks “Hitler was right” 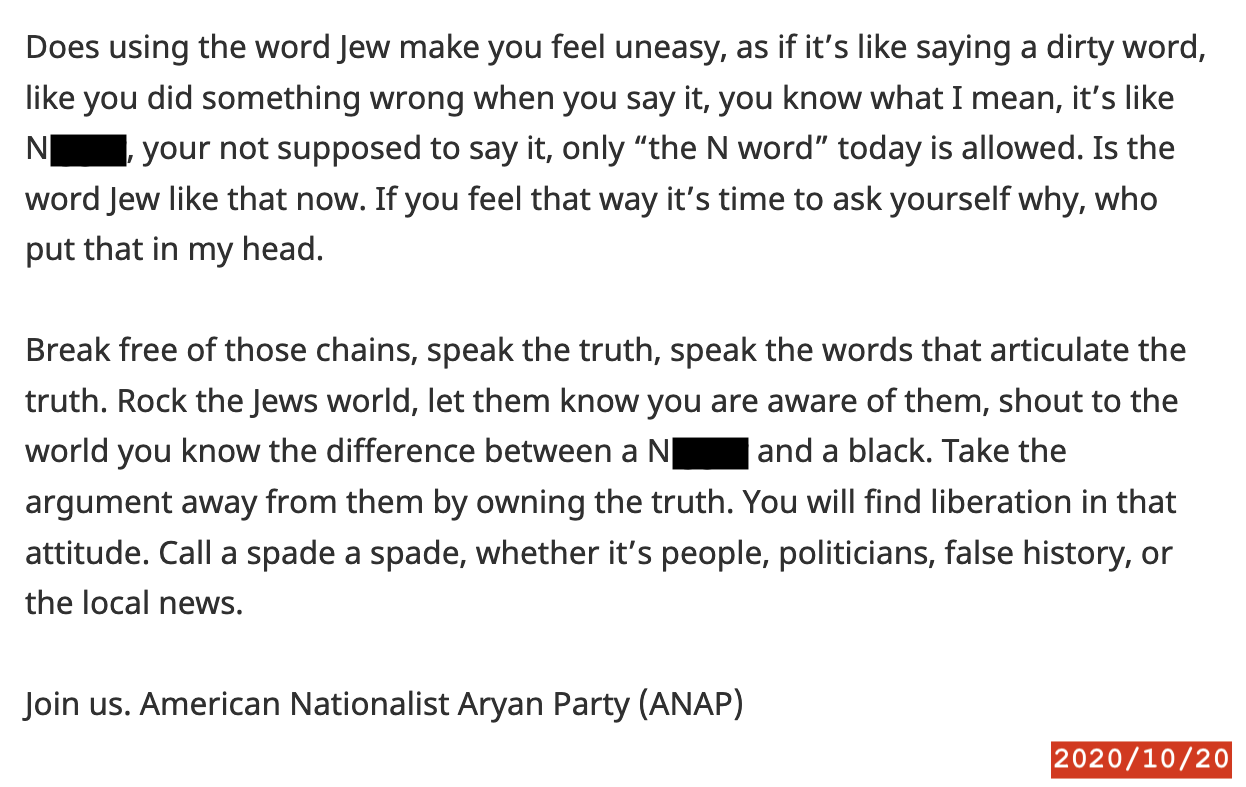 Dane Bowen, as “Mel Chizedek,” posts on the ANAP blog reciting antiblack slurs as part of a classic antisemitic conspiracy theory that casts Jews as the masterminds behind black rebellion/resistance to white supremacy.

While “Mel Chizedek” is the name that appears at the bottom of these posts on the ANAP site, the base account associated with the “Mel Chizedek” pen name within the blog utilizes the username “h53jolly,” which appears to be a call sign derived from Bowen’s 21 years as a helicopter crew chief with the US Air Force. Bowen also created a “My Militia” profile with the same username, which he used to post his full name, email, and phone number to the site’s forums in an attempt to solicit contact from potential Southern Oregon militia recruits, and coordinate with other militia leaders on the site. 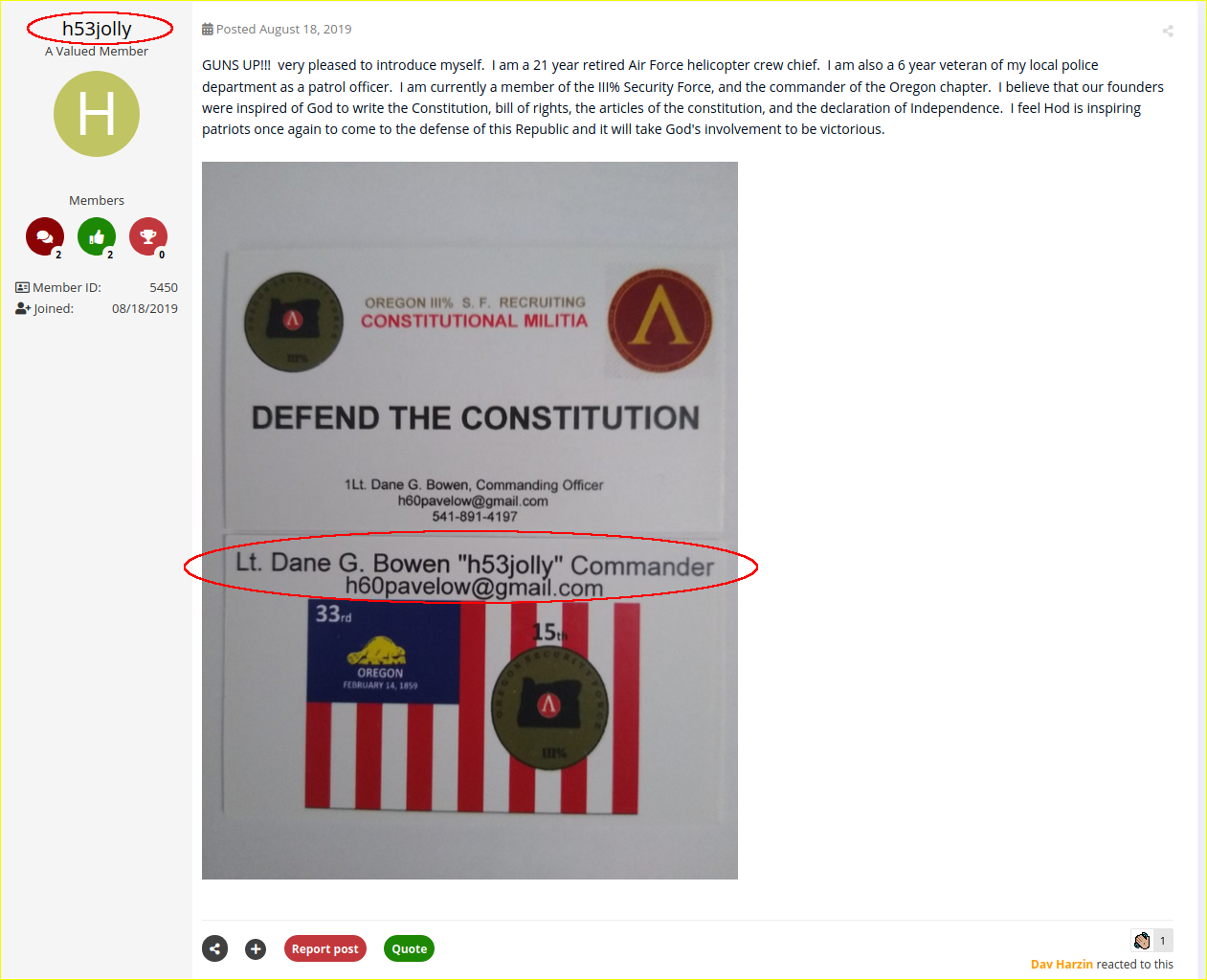 Dane Bowen posts a picture of his business card with his contact information, call-sign “h53jolly”, and affiliation with Oregon Security Force III%‘er militia.

The “global avatar” website “Gravatar” is used for managing identities across websites. Here is a screenshot of the page for the username “h53jolly”, which has a display name of “Mel Chizedek”.

The “American National Aryan Party” website, which was built on Wordpress and has since been deplatformed, had many blog posts from display name “Mel Chizedek”, which links to user “h53jolly”, Dane Bowen’s call sign and frequently-used username.

Perhaps most damningly–and in peak 2020 fascist boomerposting style–Bowen recently began using his and his wife’s shared Facebook page to make posts about the threat posed by “antifa,” and argue with his Facebook friends about the history of “Bolshevism.” In the comments section of a post dated to September 10, 2020 (shortly after right-wing media began spreading the rumor that “Antifa” were behind Oregon’s raging wildfires), Bowen responded to a critical Facebook friend by launching into a lengthy rant demonizing “Antifa,” remarking sympathetically about German National Socialism, and finally declaring dramatically that he “will not allow this filth to succeed.”

Just over one month later, ANAP blog author “Mel Chizedek” published a blog post on the ANAP site titled Antifa is Jew in which the entire opening paragraph is duplicated, verbatim, from Bowen’s early-September Facebook comment. Multiple other sections of the blog post are also clearly drawn from the same Facebook comment, though in some cases with minor changes. In addition to the open antisemitism newly evident in the title of the blog post, other (more dramatic) differences between September’s Facebook comment and October’s blog post include the fact that the blog post ends with a lengthy quotation from Mein Kampf. 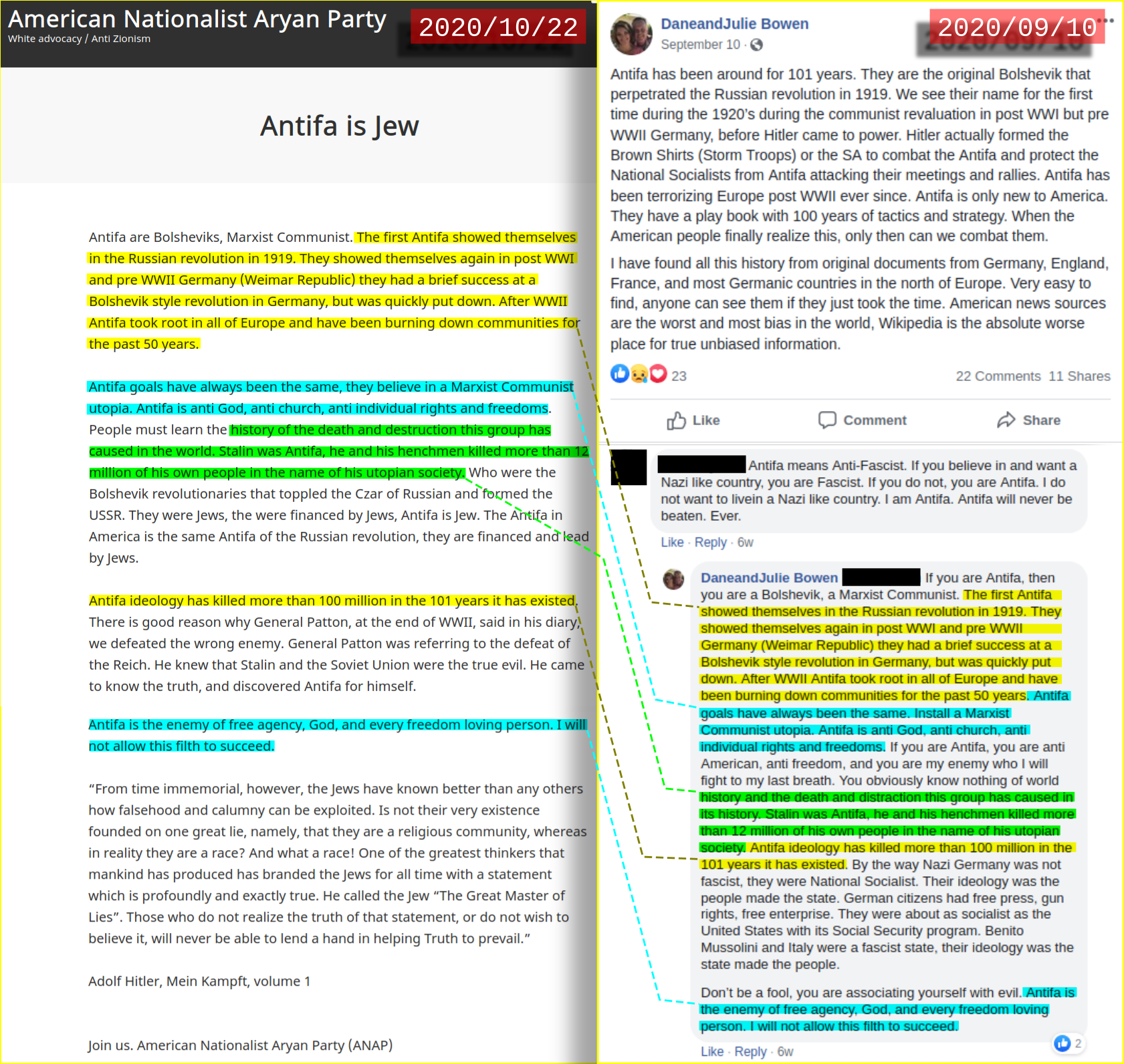 Dane Bowen posts a first draft of his Nazi talking points on Facebook. Slightly over one month later, he would post what appears to be an openly antisemitic final iteration on the ANAP blog.

Prior to attempting to co-found a new American National Socialist party in Oregon this fall, Dane Bowen spent 21 years as an Air Force helicopter crew chief, followed by 6 years (June 8, 2011 - February 14, 2017) during which he was employed as a reserve Klamath Falls Police Officer, according to both his Oregon DPSST records and local Klamath County media coverage. 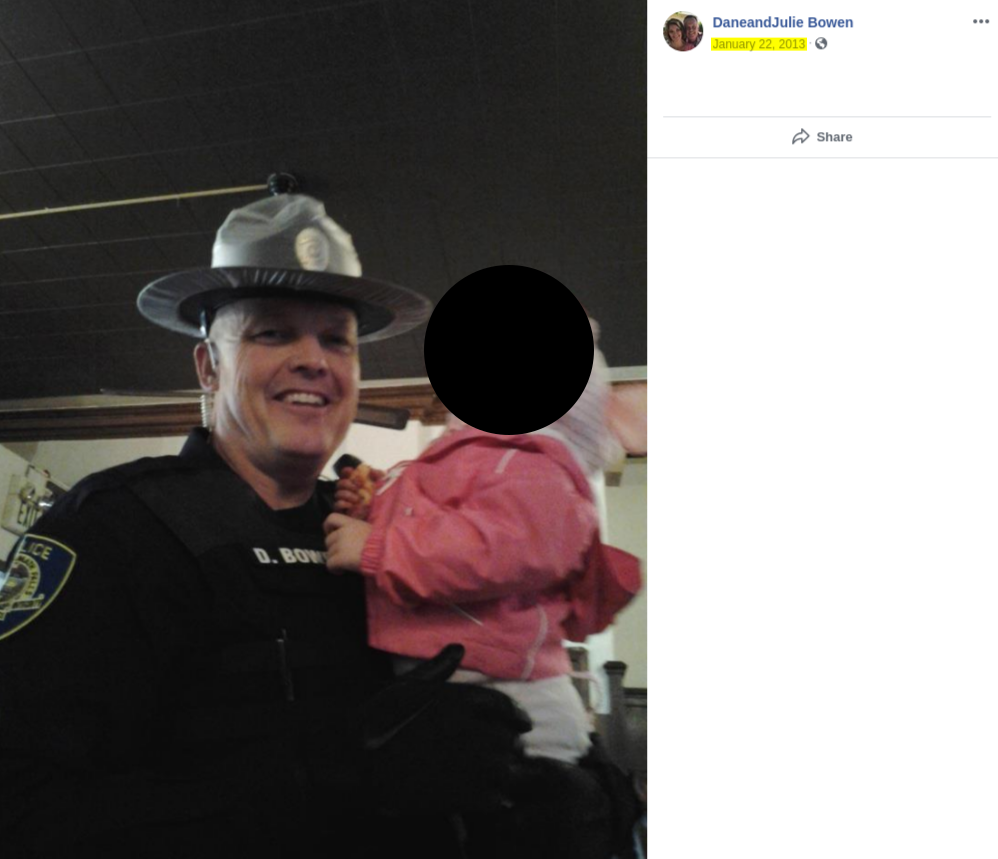 In a Facebook photo posted to his and his wife’s profile in 2013, Dane Bowen poses in his Klamath Falls Patrol Officer uniform

The first public indication of Bowen’s political activity we have found appears to be from June of 2019, when Bowen offered the services of his Oregon III% Security Force militia to Oregon Republican Senators who staged a walkout rather than vote on climate legislation. Though the Senators publicly declined help from the militias, Bowen stated that they would be “on standby” to fight against any Oregon State Police action they saw as “unconstitutional.”

The Oregon state senator walk-out in the summer of 2019 wasn’t the first time militias worked to support parts of the Republican party in Oregon. In May of 2017, Multnomah County GOP chair James Buchal advocated for formally using militias as private security for GOP events in Multnomah County. In June of 2017, the Multnomah County Republican Party passed a resolution to do just that. In the face of criticism of the decision, Buchal claimed he had “researched” the groups, which seems to mean he read their internal by-laws in which they purport not to tolerate racism; a claim belied by the organization’s direct lineage in the white power movement, and its ongoing history of violent white supremacist organizing and collaboration.

In August of 2019 (at the end of a summer of legislative unrest which also saw the creation of the far-right “Timber Unity” organization) Dane Bowen posted on MyMilitia introducing himself and advertising his chapter of the Oregon III% Security Force, which he says contained at that time only three members. In these posts, Bowen describes himself as the “commander” of said chapter, and states:

“I believe that our founders were inspired of God to write the Constitution, bill of rights, the articles of the constitution, and the declaration of Independence. I feel Hod [sic] is inspiring patriots once again to come to the defense of this Republic and it will take God’s involvement to be victorious.”

Unfortunately for Bowen’s militia aspirations, the III% Security Force–a militia subgroup sufficiently fringe that the main III% organization pledged no further association with them back in 2018–split into subfactions in the throes of inter-Patriot drama less than a week later, with some chapters (Oregon not named among them) reforming into the “American Constitutional Elites,” and others remaining entirely unaccounted for.

None of Bowen’s visible MyMilitia posts are dated after the III% Security Force’s supposed dissolution in late August 2019, but a profile on “event goers” site 10times using the name “Dane G. Bowen,” with a listed occupation of “Constitutional militia at Oregon III% Security Force” in Klamath County, OR marked themselves as planning to attend a Gun Show in Klamath Falls in early December 2019. After that point, it’s unclear whether–or for how long–Bowen remained engaged in militia organizing. But militia members and organizations in Oregon and elsewhere have been anything but idle over the past year, from participating in heavily-armed protests against coronavirus-related health regulation, to fantasizing about and planning vicious reactionary violence against racial justice protesters and “antifa” in private chat channels this summer.

A Recent Radicalization or Continued Ties?

Without further information and insight into the trajectory of Dane Bowen’s radicalization, we cannot know for certain whether, for example, Bowen’s exposure to and acceptance of overt neo-Nazism came before or after his time commanding a tiny III% fringe militia, or his time in the military, or his time as a cop. But what is abundantly clear–and backed up by extensively researched historical examples–is that common threads of racism, nativist white nationalism, anti-communism, and antisemitic conspiracy theory together play a central role in the radicalization of white men engaging with right-wing militia culture. From QAnon-ers getting elected to the US House of Representatives to Oregon police spouting conspiracy theories about “Antifa” setting Oregon wildfires and now-ubiquitous antisemitic dogwhistle George Soros, far-right reactionary paranoia is a driving force behind reactionary political violence in the U.S. right now. Actively-organizing neo-Nazis like Dane Bowen, with clear, direct militia ties and histories of military/police work, show how closely intertwined violent fascist politics are with mainstream right-wing rhetoric at this particular moment.

If you have further information on Dane Garrett Bowen, Austin Lewis Miller, the American Nationalist Aryan Party, or any other fascist organizing, please contact Rose City Antifa at [email protected].