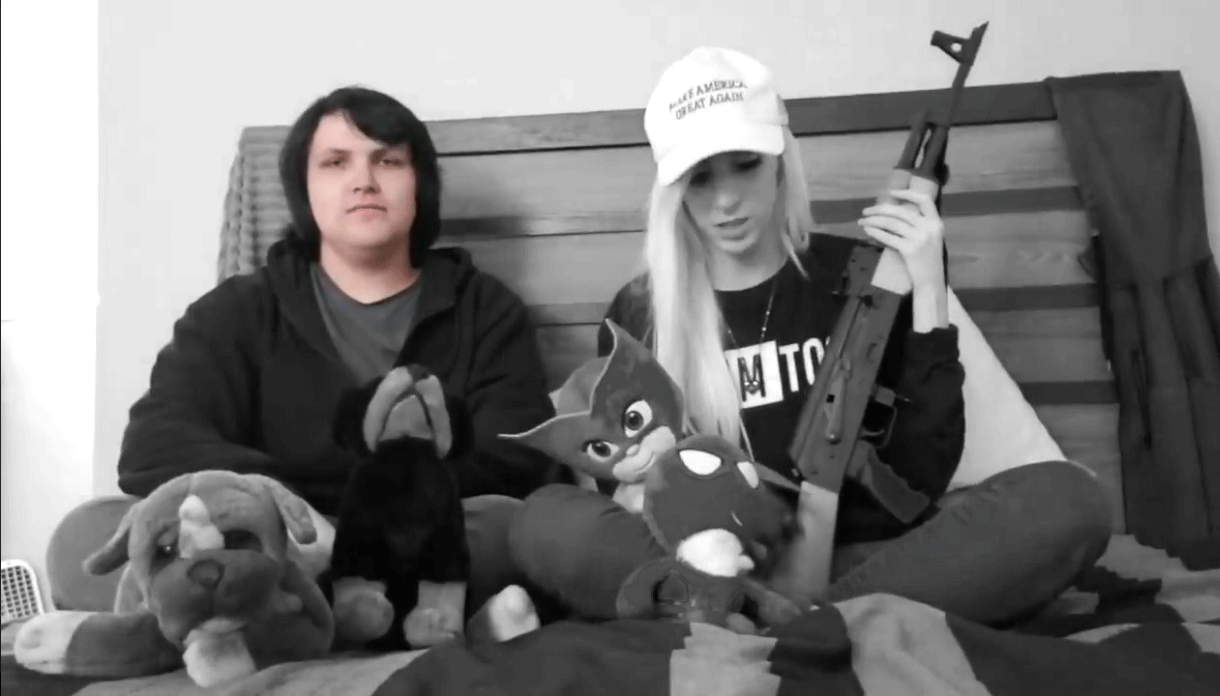 A recent addition to Patriot Prayer’s mob of far-right activists, Alyssa Vinsonhaler quickly made herself a key player in white nationalist Haley Adams’ entourage by presenting herself as a “former member” of antifa. In promoting herself as a so-called insider source on the radical left, she’s given Adams and others fresh targets for harrassment and facile rhetorical fodder for their bigoted agenda. 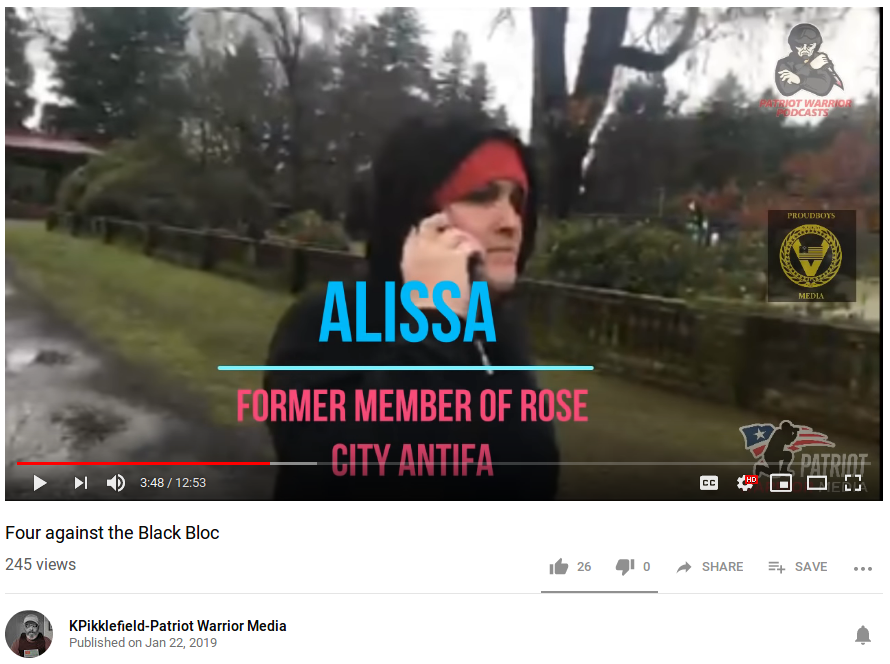 While Vinsonhaler’s tacit claim to membership in Rose City Antifa is entirely false, a short-lived correspondence between Vinsonhaler and Rose City Antifa did occur when she contacted us with an interest in working with our organization in 2018. We promptly declined for two main reasons: her understanding of anti-fascism and left-wing politics in general was virtually nonexistent, and she had very recently applied to become a police officer in the city of Gresham. Her failure to advance beyond this preliminary stage of vetting was the extent of her “relationship” with RCA. Any further association that Vinsonhaler claims with RCA is a lie. While it is possible she may have had other contact with anti-fascist groups or individuals, we would not be surprised if her entire claimed tenure as an anti-fascist stems from this brief communication and some other assorted social media posts during the time period.

To our group, the idea that Vinsonhaler could describe herself both as a Marxist and desire to be a cop showed that she had little-to-no understanding of class relations and the political realities of police forces in the United States. It is not simply a matter of her not being “radical” enough, it is that her politics, as stated, were incoherent. The close timeframe of her applications to two fundamentally antagonistic groups didn’t give the impression of a dependable, careful, or principled person. She appeared to RCA to be drifting, attempting to gain entry to whatever group would accept her.

After this rejection, Rose City Antifa’s correspondence with Vinsonhaler resumed briefly in December of 2018 when she sent a message to explain that she had undertaken a plot to “infiltrate” Patriot Prayer– an operation which apparently consisted of attending Haley Adams’ far-right demonstrations, adding to their numbers, and repeating their talking points into whatever cameras happened to be nearby: in essence, miming the far-right, just as she had previously mimed being a “Marxist.” The fact that she alerted us to her actions unprompted seemed to further the idea that she was seeking some sort of acceptance or clout in the political scene, rather than attempting to achieve worthwhile goals.

Rose City Antifa attempted to dissuade her from this self-styled infiltration, because it was no more than collaboration. But predictably enough, Vinsonhaler soon became caught up her own ruse (or there was no ruse to begin with) and was converted by the far-right’s facile, bad-faith discourses. Vinsonhaler, for whatever reason, desperately wanted to latch on to any radical political group that would have her, regardless of where they fell on the political spectrum. Now that she has fallen in with Haley Adams’ opportunistic far-right grift, she will do everything in her power to further Adams’ bigoted aims and platform. 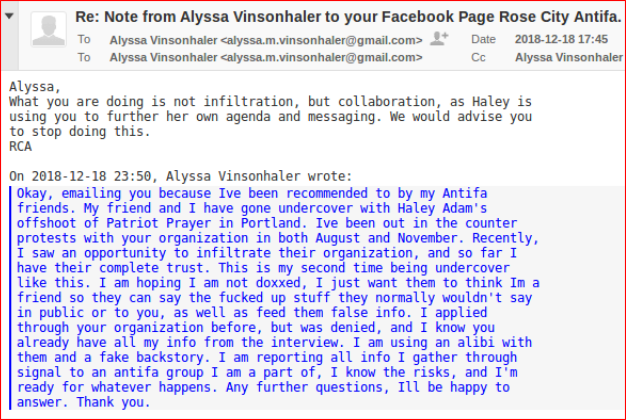 Vinsonhaler went on to spent much of the winter accompanying Haley Adams on her harrassment incursions into Portland. Frequently accompanied by Reggie Axtell, James Robert Wright, Edie Dixon, convicted sex offender Robert West, Brandon Farley, and Proud Boy Nate Strong; Adams and Vinsonhaler made themselves a semi-regular nuisance outside of City Hall. For a short time they adopted yellow safety vests in mimickry of the French “gilets jaunes” political movement, and began to demand, ineptly, that Ted Wheeler resign as mayor of Portland. After several of these unsuccessful attempts at provocation, the loose group of trolls turned their sights on local union halls and other leftist organizing spaces.

In January of 2019, fewer than two full months after Rose City Antifa declined to work with her, Vinsonhaler, along with [white supremacist Edie Dixon] (https://twitter.com/RoseCityAntifa/status/1007839061195808768) appeared on a minor right-wing podcast to spin her tale of “defecting” from antifa. She gave vague details of an alleged vetting process:

“It’s not very strict, it’s very relaxed… There’s an interview, you have to wait a certain amount of time and you’re basically in. You talk to some other people who might be able to get you in quicker”.

What precisely Vinsonhaler may believe she is referring to is a mystery, but her eagerness to divulge information on leftists to the far-right was readily apparent. 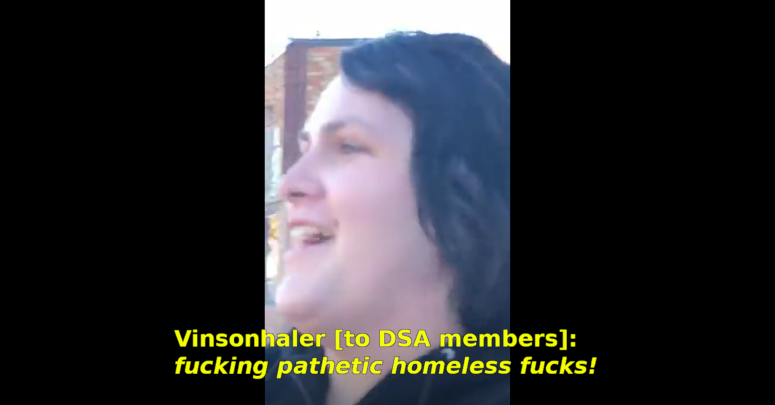 On the afternoon of January 13, 2019, while en route to harass a meeting of the local chapter of the Democratic Socialists of America, Adams filmed Vinsonhaler asserting that the “DSA is a gang in Portland.” Later in Adams’ footage, Vinsonhaler calls two DSA members “fucking pathetic homeless fucks” after speculating that they may not own cars, and “Marxist scum,” while spitting. Vinsonhaler can then be heard claiming to have given information about leftists to the FBI. Even as Adams waves her middle finger in one DSA member’s face, telling him “Dude, I can’t wait for you to get your ass beat”, the DSA members calmly request Adams, Vinsonhaler, Proud Boy Nate Strong, and James Robert Wright leave the premises. 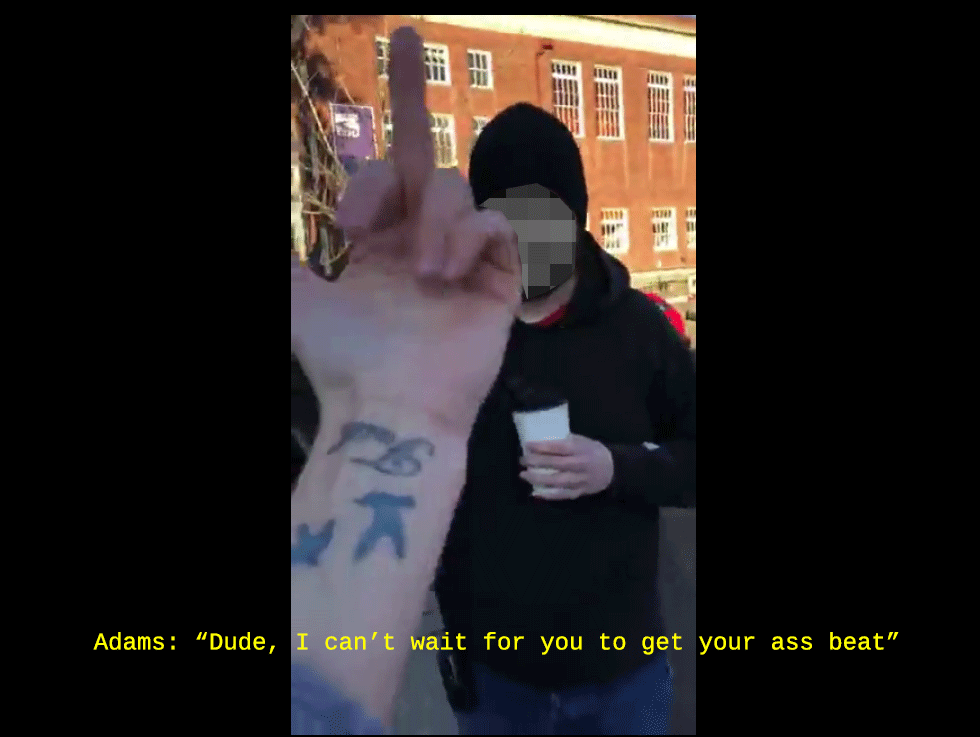 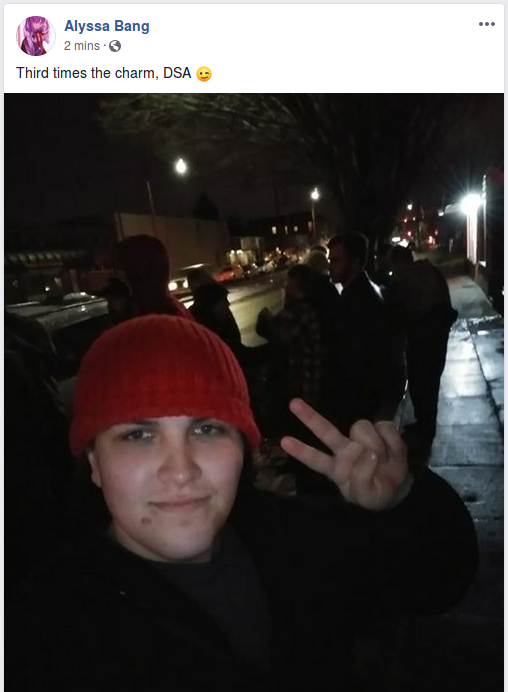 Vinsonhaler was also present on both January 17 and 19 of this year when various Patriot Prayer members and Proud Boys including Tiny Toese, James Johnson, Jason James, Joey Gibson, and Steve Drury instigated altercations and assaulted passers-by outside the Industrial Workers of the World union hall on NE Burnside. Later in the day on the 19th, Vinsonhaler travelled downtown with the rest of the far-right crowd, where she marched in an anti-choice rally hosted by an organization which seeks to curtail the bodily autonomy of all people who experience pregnancy.

The Changing Politics of Alyssa Vinsonhaler 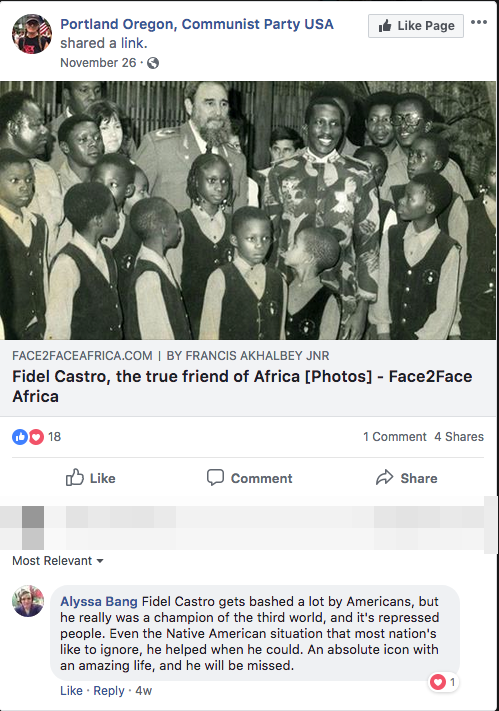 A snapshot of Vinsonhaler’s avowed politics in late November of 2018, just before she began associating with Patriot Prayer white nationalist Haley Adams. 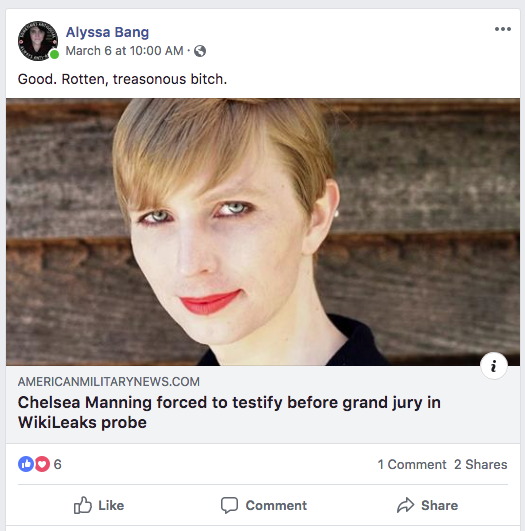 Visonhaler uses degrading, misogynist language to approve of the state attempting to coerce Chelsea Manning into acting as an informant and describes Manning, who is currently jailed for her principaled refusal to testify before a grand jury, as treasonous. 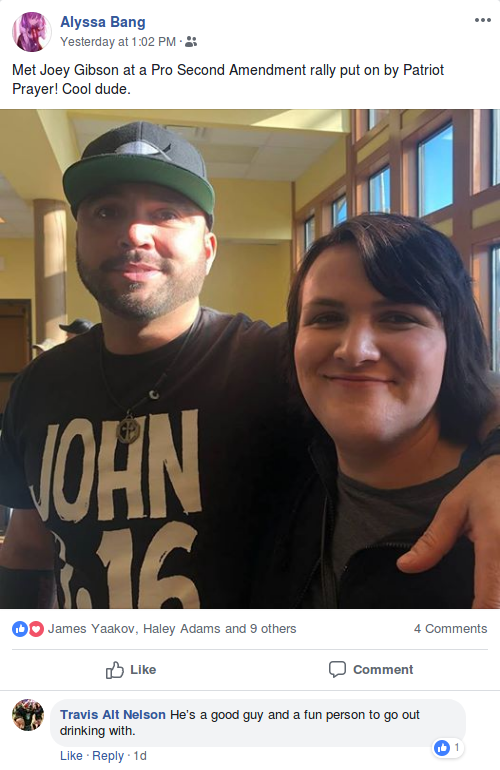 Vinsonhaler brags about participating in a Patriot Prayer event and meeting founder Joey Gibson, who has spent the entire Trump presidency organizing rallies for violent bigots, white nationalists, and neo-Nazis. Disgraced Proud Boy Travis Nelson comments about drinking with Gibson, whose drunken antics and assaults are the subject of much conversation among his former allies. 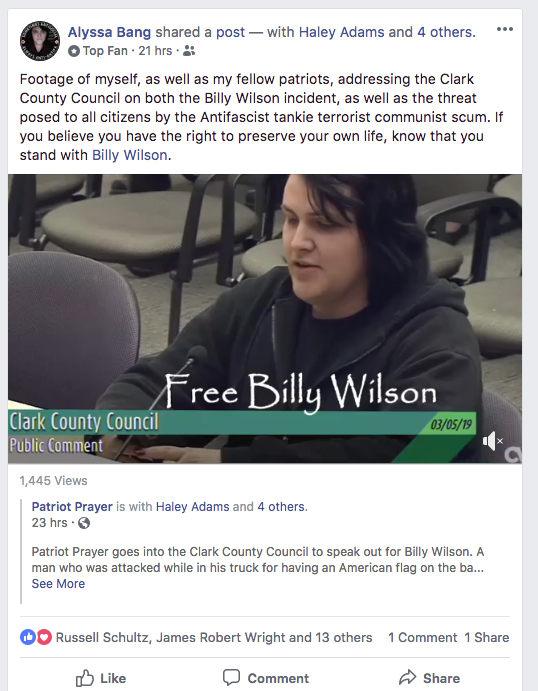 Billy Wilson currently faces charges of reckless endangerment and reckless driving after he [drove his pickup truck into a crowd of people in downtown Vancouver] (https://www.wweek.com/news/2017/09/10/police-in-vancouver-arrest-man-for-nearly-running-down-antifa-protesters-with-his-truck/) protesting the presence of fascists in their community. Patriot Prayer members chose a public meeting of the Clark County administrative council responsible for budgets, zoning, and some advisory board appointments as a venue to testify on Wilson’s behalf. 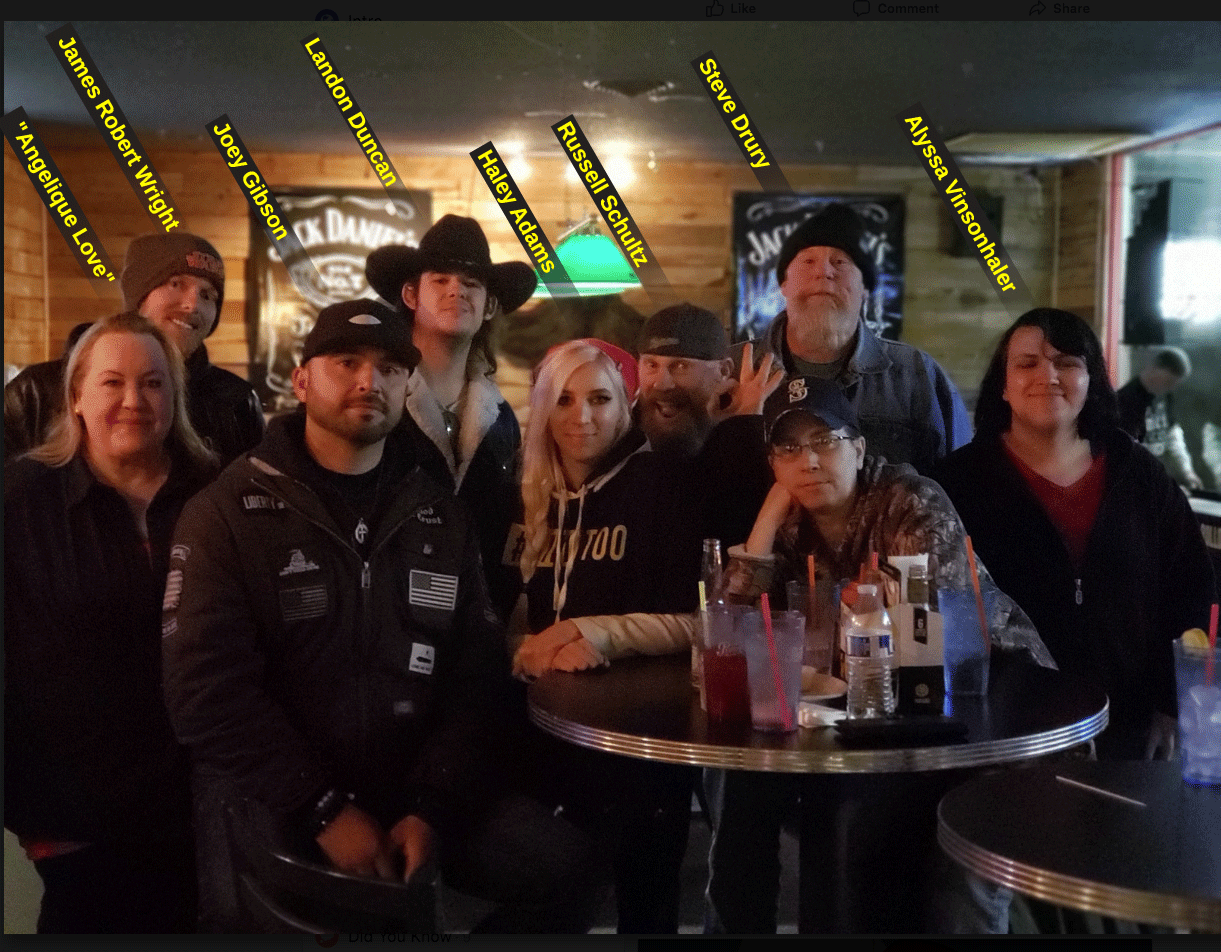 Vinsonhaler and a collection of violent bigots and conspiracists, many of whom are associated with Patriot Prayer.

Arguably the most disturbing detail of Vinsonhaler’s conversion is her newfound enthusiasm for rebuilding the former African apartheid state of Rhodesia in the Pacific Northwest. During the Cold War, the anti-colonial civil war in what is now Zimbabwe became an international magnet for white supremacist mercenaries seeking violence(sometimes recruited via advertisements in mercenary-themed magazines). Today, legends of an international squad of white nationalists fighting a doomed war for blood and soil provide the alt-right with a potent sense of nostalgia; notably, mass murderer Dylann Roof titled his manifesto The Last Rhodesian. It’s not by coincidence that the post below, and Vinsonhaler’s expressed approval, also echo one of the most durable concepts in US white nationalist and neo-Nazi politics: the Northwest Territorial Imperative.

This post in support of a white nationalist ethnostate was made approximately one month after Vinsonhaler expressed her support for Fidel Castro and Thomas Sankara. 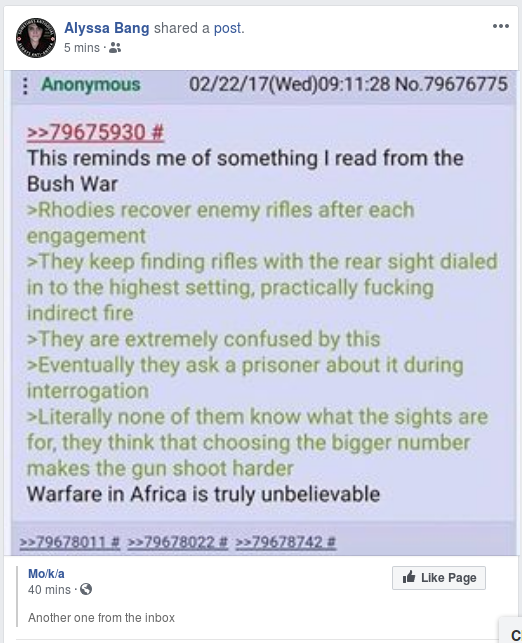 Vinsonhaler again expresses that she would like to live in Rhodesia.

At Vinsonhaler’s first counter-protest against Adams and company, an unknown person posturing as a leftist used despicable transphobic behavior and language, specifically directed at Vinsonhaler and Edie Dixon. While Vinsonhaler’s anger and disgust at this incident is absolutely justified, her sudden alliances with white nationalist activists must also be seen as part of a pattern of behavior that includes both her attempt to join the Gresham Police Department, and her insinuations about having recently been a “member of antifa”.

We cannot know what the exact motivations behind Vinsonhaler’s sudden political conversions were or are. Perhaps she is simply lashing out in response to perceived social rejection, using whatever support she can get from the far-right’s bigoted rejects and wash-outs. Unfortunately, this is a not-uncommon political conversion story: people who seek out left activism for social capital rather than for the ethical necessity of the work often end up flip-flopping between opposing ideologies, taking advantage of any and every opportunity to further their own personal status. That said, there is no social or interpersonal context that could excuse Vinsonhaler’s newfound enthusiasm for spreading genocidal memes and white nationalist talking points. And her sudden willingness to publicly ally with violent white supremacists– whose collaboration with overt fascists and neo-Nazis is well-documented– makes her a threat to all community members who engage in solidarity and self-defense against fascist encroachment.

Name: Alysssa Vinsonhaler
AKA: Alyssa Bang
DOB: 10/31/1994
Address: 16751 SE 82nd Dr Apt 1202 Clackamas, OR 97015
Vehicle: White Volkswagen Jetta, WA BGX1878
Employment: During initial contact with RCA, Alyssa reported that she had been recently discharged from an Army active duty combat arms MOS (Military Occupational Specialty). She reported spending most of her contract in Fort Riley, Kansas, and she does currently receive some amount of disability income from the Department of Veterans Affairs. Alyssa re-applied to increase her benefits in January of 2019.

Rose City Antifa will continue to defend our city and our communities against any incursion by racists and fascists. If you have information about Vinsonhaler, Haley Adams, her cronies, or other white supremacist organizing, please email us at [email protected].