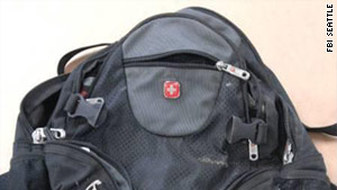 On Monday, January 17, city workers in Spokane, Washington discovered a bomb along the planned route for a unity parade in honor of civil rights leader Martin Luther King, Jr. The bomb was hidden inside a Swiss Army backpack and could be detonated remotely. Its placement on a metal bench in front of a brick wall facing Main Street had the potential to fatally direct shrapnel at passing marchers.

The bomb was defused without incident, and the march--though re-routed--went ahead as scheduled. FBI investigators report finding important evidence at the scene, including two T-shirts from neighboring Stevens County, Washington.

Last year, an explosive device was found and defused in front of Thomas S. Foley U.S. Courthouse in downtown Spokane on March 23. No arrests have been made in the March case and it is unknown if the MLK parade bomb is related.