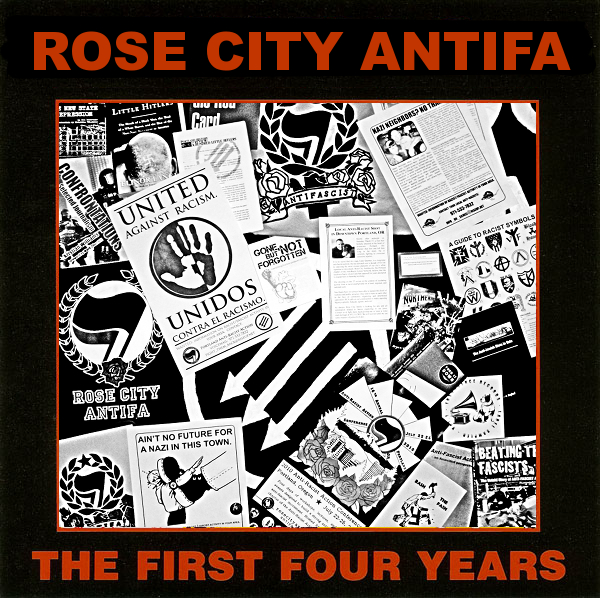 Rose City Antifascists celebrates its fourth year as an active antifascist organization this October. We would like to take the time to reflect on our successes, thank those of you who helped us over the years, and renew our commitment to eliminating organized bigotry in our city.

Flash back to 2007. Volksfront--an international neo-Nazi organization that was founded in Oregon's prison system--teamed up with the neo-Nazi Hammerskin Nation gang to bring over one hundred violent racists to the Willamette Valley. The president and founder of Volksfront, Randal Krager, called Portland his home, and large white supremacist gatherings--like Hammerfest, Aryan Fest, etc.--had been taking place in our region on a semi-regular basis for decades.

In four short years, the landscape has changed. We attribute this in no small part to the hard work of those active in the fight against fascism. There has not been a single large gathering of neo-Nazis in the Portland area since the Ad-Hoc Coalition Against Racism and Fascism--RCA's predecessor--was successful in shutting down Hammerfest, and Volksfront's Oregon leadership no longer reside in Portland after RCA's repeated campaigns exposing their white power activity. Our city is not a safe organizing base for fascists.

Over the past four years, RCA has maintained constant research and monitoring of organized fascist activity in our area, received hundreds of tips, given workshops, hosted a national anti-racist conference, participated in strategy sessions with neighbors about combating fascist activity in their area, mobilized to protest bigotry, "outed" active white power organizers to their neighbors and workplaces, published news reports, developed educational materials to fight bigotry, and supported fellow antifascists in the Pacific Northwest.

We couldn't have done it without help. Rose City Antifascists sincerely thanks our friends and allies, anonymous tipsters, event spaces which have taken a stand, community members and neighbors who have shared our research or contributed their own, and all of those who make confronting bigotry a priority in their lives. Thank you for fighting alongside us.

As we enter into our fifth year of actively opposing fascism in Portland, we remember ways in which RCA has had a positive impact on our city. We also take note of the many sobering reminders that organized racism, homophobia, and other oppression remains a big problem in our area. Rose City Antifa will continue to build off of our successes, and learn from our missteps. Our organization remains absolutely committed to opposing fascism and helping build a culture of dignity and respect in Portland.