No Nazis in the Rose City: Report on Yesterday's Antifascist Day of Action 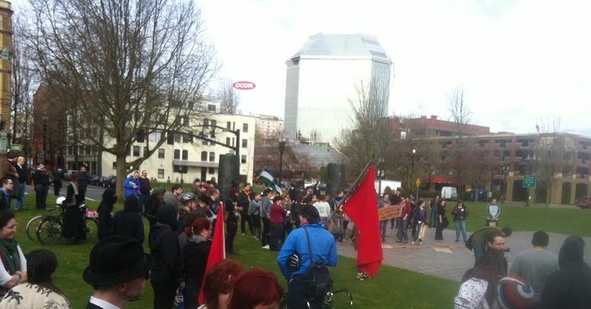 Antifascists gathered yesterday in Waterfront Park to oppose the White Man March. A series of these racist marches were planned across the country by the White Nationalist organization, American Freedom Party, and AFP's activist branch, Free America Rally. The local chapter of AFP has previously staged two “marches” in Waterfront Park. These have been very short events that are mainly opportunities to publish propaganda on their website. They were not able to use that tactic yesterday as anti-racists pre-empted their efforts.

In addition to the public call out , RCA published another article exposing new Oregon and Washington AFP members’ personal information. We also did a banner drop from the Alberta St. I-5 overpass that said “No Nazis in Rose City”.

Rose City Antifa’s call to action seems to have intimidated AFP into not turning out. Instead a small handful of AFP staged a brief photo op in Olympia, Washington. White supremacists dishonestly labeled photos of the pathetic event in Olympia as being in Oregon to try and save face after the kibosh was put on their Portland plans.

A few random boneheads tried to creep in to check stuff out in the park. Suffices to say, they were easily dispatched with by anti-racist security teams.

​A crowd of roughly 150-200 people turned out yesterday to confront the White Man March.

Despite not having the opportunity to stomp a Nazi march yesterday, much fun was had by the antifas and allies that attended. RCA gave out free T-shirts and hats, and there was live ska music at the gathering point. Allies from many different groups were in attendance.

When it was determined that AFP and their bonehead friends were not going to show, antifascists took to the street for an unpermitted march around downtown Portland. A number of pedestrians along the march route decided  to join in to show their opposition to racism as well. The anti-racist march maintained high energy from start to finish. The Portland Police were not able to stop it. This march showed loudly and clearly that there are a large number of people that are willing to stand up and fight racism here in the Rose City.

Rose City Antifa feels that an important message went out yesterday to all the fascist scum that if they try to organize in the Rose City, they will be met by an army of anti-racists. We are extremely proud of the working class solidarity our hometown showed yesterday and we hope to continue to build on that momentum to keep our streets free of fascist scum.