National Socialist Movement (NSM) organizers were spotted at an anti-Fast Track rally in Portland on May 7th 2015. Stacy Hoffman, Austin Livingston, and another two NSM representatives joined the protest downtown. President Obama was in town for a fundraiser and speaking engagement to promote the Fast Tracking of legislation regarding the Trans-Pacific Partnership deal. Due to Obama being in Portland there was a very heavy police presence downtown which the NSM used to their advantage in order to make a public appearance. 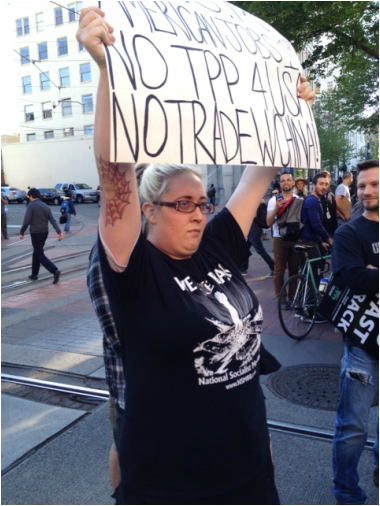 Stacy Hoffman, dressed to impress, protesting against Obama and err China before being outed as a neo-nazi.
​
​Although the four neo-Nazis were not physically assaulted due to the large, state-sponsored security detail, people did verbally accost them. One of the boneheads immediately fled when confronted. Hoffman, Livingston and another remained briefly to try and plead their case under police protection. None of the NSM crew returned the next day for Friday’s rally.


The election of President Obama was a galvanizing force for the extreme right. White supremacists have tapped into anti-Black racism and anti-government sentiment for recruitment both on traditional right-wing topics as well as those typically viewed as leftists’ domain such as environmentalism, globalization, labor and trade. Movements that are vaguely populist with poorly defined internal politics around anti-oppression issues are particularly vulnerable to being co-opted by the far right. This phenomenon was witnessed in the anti-globalization movement and more recently in Occupy. The NSM is now clumsily trying its hand at that here in Portland much as American Freedom Party did before them. 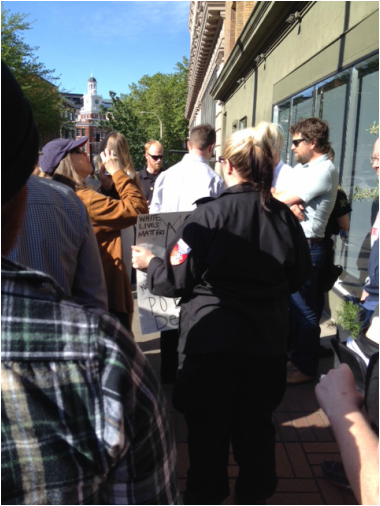 The back of her sign says “White Lives Matter.” We will not allow this to continue in Portland.