NAZI GOTHS FUCK OFF!!! SHUT DOWN DEATH IN JUNE IN PORTLAND!!! 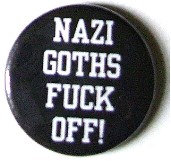 Death in June is once again on tour and this time they plan on making their way to our neck of the woods. Death In June is the neofolk project of Douglas Pearce that is infamous for its promotion of patriarchal and National Socialist ideas and use of fascist imagery and references to Nazi mysticism to spread fascist agit-prop. Last fall Rose City Antifa and allies released a call to action to oppose their tour and DiJ was met with resistance at many venues and had shows shut down. Unbelievably they are now planning on coming to Portland! The last time Pearce tried to play Portland, it did not go well for him. Let’s have a repeat performance and shut down this fascist act!

Death in June plans on following that up the next night with a show in Seattle. Let’s show DiJ that they are not welcome n the Pacific Northwest!

Join us in throwing full opposition into each stop on this tour. Even if you do not live in a city where DiJ is slated to play, you can still assist in efforts to stop this fascist act from having a platform. Show solidarity with antifa comrades on the ground!

PLEASE CONTACT THESE VENUES TO EXPRESS YOUR OUTRAGE THAT THEY ARE HOSTING THIS PRO-FASCIST ACT:

I am writing you with concerns about your choice to allow Death in June, an openly fascist band, to perform at your venue on ________.

The group has used tour posters with the SS design of the Totenkopf (Death’s Head) emblazoned on the American Flag. The group also uses the esoteric, exclusively neo-Nazi symbol the Black Sun as an image on their recent record.

The project of former Left-wing musician Douglas Pearce, the fascist motifs of the band are often thought to be merely an act of provocation. Unfortunately, Pearce is also a fascist activist, and he will likely bring this message with him on their tour.

Here are some key instances, copied from this well-researched blog post :

"In May 1999, a few days after BNP member David Copeland nail-bombed Brixton and Brick Lane markets and The Admiral Duncan pub in Soho, Death In June played The Garage in Islington (with fellow Nazi-admirers NON and Der Blutharsch). Copeland killed 3 people and injured 129. It has been widely corroborated that Pearce dedicated a song from the stage to the ‘White Wolves’ – a neo-Nazi grouping who had initially claimed responsibility for these atrocities. In much the same spirit, a valedictory message was posted to the Di6 Yahoo group forum immediately following Anders Breivik’s Utoya massacre, and mainland bombing."

“the Something Is Coming album, the proceeds of which were donated to the Bolnichi Clinic in Zagreb, Croatia during the Balkan conflict, Pearce has said “This was not purely a humanitarian gesture. It was a cultural one. A socio-Euro political one.”

"The inference here is clear, despite the characteristic coyness; a diffidence which extends to the endlessly recycled back catalogue items listed for sale on the official Death In June website. “We STRONGLY recommend that all those living in Germany wishing to order ‘BROWN BOOK’ (Achtung!) UeBER DO NOT(!!) order direct from NER as random Customs checks do exist between the U.K. and the mainland of Europa… Talk to any of the million zillion illegal immigrants that now wander lonely as a black cloud through Europa’s streets forlorn….. Those not living in little red angel’s po-faced, goody 2 shoes Germany are also free to take advantage of these internet mail order firms….” he advises. The album in question, 1987′s Brown Book contains a version of the SA anthem ‘Horst-Wessel-Lied’, and has therefore been totally banned for sale or distribution by the German authorities”

“In 1992, DIJ backed out and refused to play the Dark X-Mas festival in Hamburg after the organizers issued a statement condemning a spate of fascist attacks on immigrant asylums in Germany. Likewise, DIJ also refused to play a 1994 Festival of Darkness because the show was promoted as being against racism and neo-nazism.”

Their name comes from the “Night of the Long Knives,” June 6th, in which the Hitlerian wing of the Nazi party assassinated the Strasserian wing, considered the Nazi’s “left-wing” for their more socialist ideas about fascism. This slain group has remained a focal point for National Socialists to this day, who believe the Third Reich could have succeeded were some other Nazi besides Hitler to come to power.

Those who defend the band point to the fact that Douglas Pierce is openly homosexual, has worked with Jewish artists, and has played in Israel. Many modern fascists have skewed their positions a bit to be more popular, and many homosexuals and Jews have been involved the rising “New Right” constellations of recent decades.

Needless to say, their new found inclusiveness does not justify their politics. The dream of Pearce and New Rightist is still a European-centered (Occidentalist) Nationalist resurgence. Of his show in Israel, for instance, Pearce claims to appreciate the Zionist state for it’s assertion of superior Western ideals, which is a disgustingly anti-Arabic/Sephardic Jewish stance. Pearce and his cohorts are anti-Immigrant, anti-Left, and anti-integration. He continuously reiterates these positions in almost every interview.

Death in June shows have been protested, sabotaged, and even banned in certain regions for decades. Especially in Germany, Austria, and Switzerland, where they have particularly strong neo-Nazi followings.

I have no reason to believe that anyone involved at ______ condones these types of politics, and I understand that the show will almost certainly sell-out. My hope, however, is that ______ takes a stance against fascist imagery, slogans, and the neo-Nazis who will undoubtedly come from around the region to attend the show. By allowing such a show at your venue you will be alienating antifascists, people of color, women, queer people, Jews and other marginalized groups. This show will undoubtedly draw a lot of attention. Is it worth one night of making money to forever tarnish your reputation?

Comrades that are Opposing Death in June in the Pacific Northwest:
Circle Ansuz
Emerald City Antifa

More information about Death in June: