The National Socialist Movement planned a “Meet and Greet” in Portland for yesterday Sunday, February 23rd. While antifascists were there to confront the NSM, no NSM actually showed for this event. This non-event was scheduled by Stacy Hoffman. While it is definitely a good thing that no boneheads turned out for this, we feel that it is important to continue to put pressure on Hoffman so that she will entirely stop attempting to revive the corpse of the Oregon NSM.

In this article we will outline the current organizing structure of the NSM as well as give some background on the various incarnations of NSM “units” in Oregon over the past ten years. 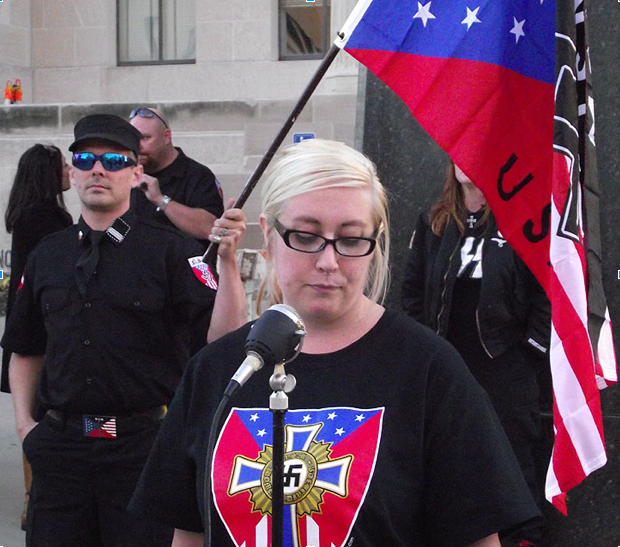 Stacy Hoffman giving a speech for the NSM at an anti-migrant rally in Kansas City, November 2013.
Part One: Current NSM Organizing in Oregon

Stacy Hoffman is currently the only person identifying as NSM in Portland. Stacy Hoffman has been involved in the NSM for a little over a year. In that time, her activities with the group have included a trip to Leith, North Dakota, where she met up with other Oregon NSM members, including long time Eugene NSM leader and recent American Freedom Party “activist” Jimmy Marr . Hoffman and Marr traveled to Leith to attend an NSM “Town Hall” meeting in support of fellow white supremacist Craig Cobb . Cobb is a notorious neo-Nazi who established the Podblanc video sharing site and was recently attempting to take over the town of Leith as an all-white enclave . NSM member Kynan Dutton and his wife Deborah both moved from Sheridan, Oregon to Leith, ND in October of 2013 in order to assist Cobb. 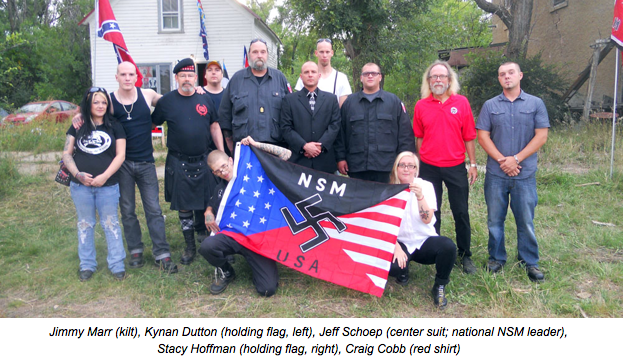 In Leith, Kynan Dutton was arrested alongside Craig Cobb in November of 2013 after the duo carried out armed patrols in Leith and threatened residents there. The threatening patrols followed graffiti having been left on Craig Cobb’s house , after a DNA test came back showing Cobb to be of 14% Sub-Saharan African descent. Cobb awaits trial on terrorizing charges while Dutton has taken a plea deal and is required to testify at Cobb’s upcoming trial.

Meanwhile, that same month in Kansas City, Missouri, Stacy Hoffman attended an NSM rally against “illegal immigration”. After the rally, NSM members held a swastika lighting outside of city limits where, despite having a burning ban, they commended the police for being far more accommodating than the Kansas City PD. 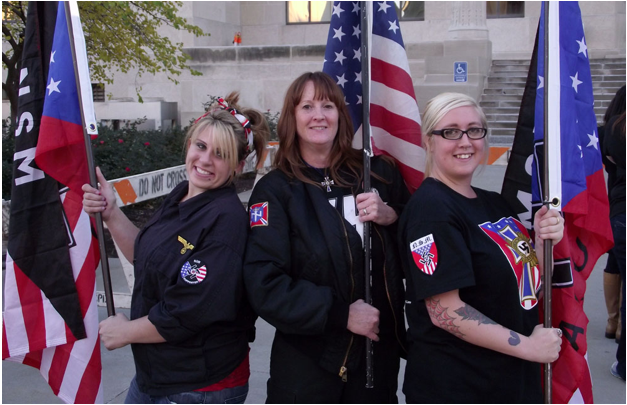 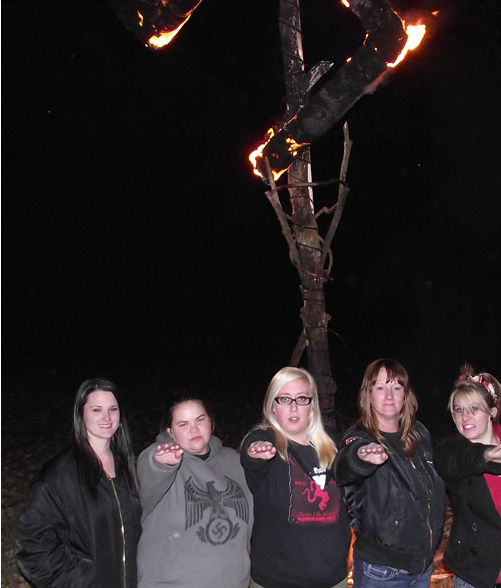 Background: Ten Years of the National Socialist Movement in Oregon

Oregon has a history with the NSM going back approximately one decade. Oregon NSM units generally seem to pop up for short periods of time and then fizzle out or collapse. One frequent story with the NSM is its state leaders citing difficulty in working with Jeff Schoep , the NSM’s national leader, as a reason for their departure. 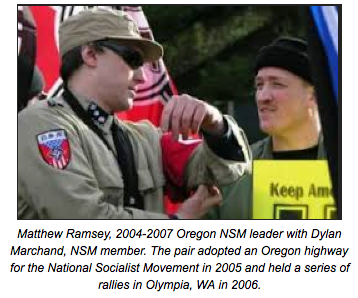 Matthew Ramsey AKA “Jim Ramm” had a project called “Tualatin Valley Skins.” After joining the NSM in mid 2004, Ramsey made a spectacle of his bonehead project when he announced a rally in SW Portland’s Gabriel Park in January of 2005. The chosen site of Ramsey’s rally was no accident- the neighborhood surrounding Gabriel Park is home to many of the city’s Jewish and Middle Eastern residents. The neo-Nazi group’s actual presence in the park was brief and pathetic (a few men showed up in the park, yelled “white power,” and quickly left), but the event was countered by an anti-racist protest at the scene and a “unity” rally off site for neighborhood residents and other concerned individuals, both of which were well attended.

Later that same year, Ramsey and Dylan Marchand adopted a highway in Salem, Oregon as a publicity stunt for the National Socialist Movement. In 2006, the pair held a series of NSM rallies in the Olympia, Washington area. Ramsey was also involved in the planning of a white supremacist gathering in Northern Idaho. He had previously spent time in that area with Aryan Nations leader Richard Butler before his death.  Ramsey’s neo-Nazi activity didn’t stop at the street-level, either. He was also active on the internet, running a website called “Nukeisrael” and developing a racist video game entitled “Zog’s Nightmare.”

His tenure as Oregon NSM unit leader ended not long after it began with a 2007 public dispute involving Ramsey, John Schaefer and Jeff Schoepp, in part over the NSM’s seizure of Ramsey’s racist websites.

A couple of years after Ramsey and Marchand both had left NSM, in 2009, Marchand planned a white supremacist campout with Daniel Lee Jones, then a member of the American National Socialist Workers Party (formed by Bill White after he also left the NSM.) Readers may remember Daniel Jones for such activities as flying nazi flags over Portland with helium balloons in 2008 and mailing a noose to an NAACP member in 2010, which resulted in a prison sentence. 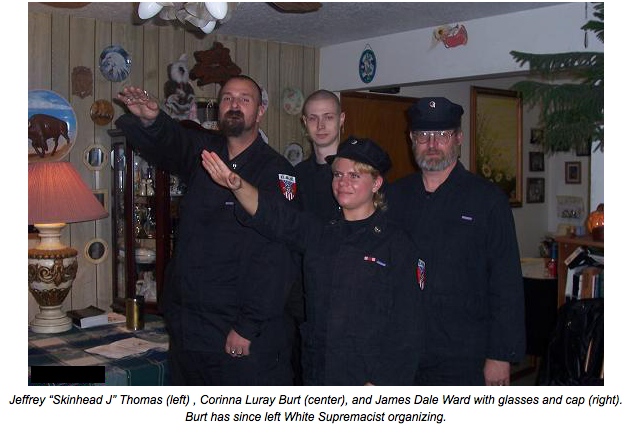 Note : while we mention Corinna Burt for the purpose of our history, we also want to be clear that Burt has now left the neo-Nazi scene .

According to the complete NSM membership list leaked in 2010 , Burt joined the NSM in the first half of 2009, after which she quickly rose to leadership in the Portland area. Burt, who has since left White Nationalist organizing, dove into her career in Portland Nazism by attending a 2009 Holocaust Denial lecture by David Irving .

In keeping with the Holocaust Denial trend, Burt’s NSM fliered the neighborhood around Congregation Beth Israel with fliers denying the Holocaust in September of 2009. Oregon NSM members including Burt attended an NSM anti-immigrant rally in Arizona on November 7, 2009. In March of 2010, Burt teamed up with Eugene, Oregon NSM leader Jimmy Marr to give a “Treblinka Was Not a Death Camp” presentation at Eugene’s Pacifica Forum.

Jimmy Marr remains active in the NSM and other White Supremacist organizing in Oregon, most recently with the American Freedom Party . He was responsible for creating the “” Anti-racist is a code word for Anti-white ” banner displayed in Eugene, OR on September 2nd of 2013, as well as another banner, reading “Diversity is a code word for White Genocide,” which was displayed in Portland, OR on December 12th of 2013.

A couple of other figures in the Portland area NSM during Burt’s tenure with the group were:


Also, Drew and Chad Bostwick in the midwest, who both played in the racist rock group “Enforcer” and were involved in the Nebraska B&H AD event, are both worth mentioning as a link between the NSM and the Oregon-founded Volksfront organization (which disbanded in 2012.) The Bostwick brothers have a long history of involvement in different white supremacist groups: Drew Bostwick was a National Socialist Movement leader for NSM Iowa as well as being connected to the Aryan Nations, whereas Chad Bostwick was involved with Volksfront International. Chad Bostwick also lived in Oregon between 2009 and 2010 while prospecting for Volksfront.

One last NSM figure in this time period bears mention. Andrew Patterson of Southern Oregon served time for a 2003 assault on two homeless men and an East Indian motel owner. Patterson led an active NSM chapter from Phoenix, Oregon during early 2009. Soon after 2009 media stories covered Patterson’s Nazi activity, he was arrested for parole violations . Although Patterson told reporters in 2012 that he ceased involvement in the white supremacist movement, Patterson is known to keep in contact with active neo-Nazis. Patterson now runs Patterson’s Martial Arts in Gold Hill, OR. 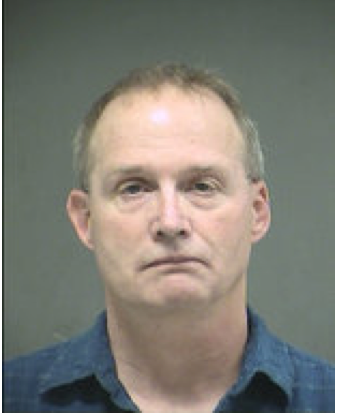 After Corinna Burt left the NSM, James Dale Ward of Forest Grove, OR seems to have become the NSM leader for the northern portion of the state. In September of 2011, Ward was also listed as a contact for the Northwest Front. Ward appears to have stepped back from race war politics after his son, Cody Ward, used his father’s illegally-held short barrel shotgun to kill a friend who was visiting the house in November of 2011. James Ward was fined for possession of the weapon and given 3 years probation.

The Oregonian article about the shooting failed to mention Ward’s neo-Nazi affiliation.

It seems as if Stacy Hoffman may be trying to be the next Corrina Burt. Indeed, Hoffman mimics Burt even by studying mortuary science for some time at Mount Hood Community College. (Burt is involved in the funeral industry.) We hope that Hoffman will also choose a similar path as Burt and leave white supremacist organizing altogether. In the meantime, we would welcome more information about NSM activities in Oregon and those involved in it.