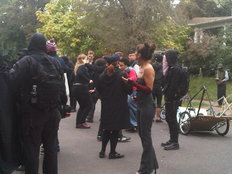 On Sunday October 16th, a group of 20-30 antifascists and allies gathered at SE 32nd Avenue and Taylor Street to oppose the opening of Mars Hill’s Portland branch. Demonstrators carried banners with statements of support for the LGBTQ community and maintained a presence in front of the church throughout the service. As church attendees exited the building, demonstrators held a dance party with the aid of a portable sound system and chanted, “Homophobes get out of here! Pro-Choice! Pro-Queer!”

The vast majority of passersby were supportive of the protest. Some neighbors expressed concern with the neighborhood association’s failure to effectively deal with the church’s arrival in SE Portland, especially in regards to the safety of the area’s queer residents. A few neighbors offered criticisms about the protest itself, however the overwhelming majority of community feedback was positive.

Mars Hill is a misogynistic, homophobic, evangelical megachurch founded by Mark Driscoll in Seattle, Washington. Driscoll’s charismatic persona and lively combination of pop culture references and “Radical Reformism” proved to be a dynamo combination for tapping into a new vein of pierced and tattooed recruits. His tiny flock first met in his living room in 1996 and swelled to a membership of 1,000 by 2003. It now boasts 12 branches in four states. The original Seattle branch alone was reported to have an attendance of 3,500 people per week in 2006, and numbers have grown since then. There are congregations of Mars Hill specifically devoted to “converting” queer people, encouraging them to suppress their sexuality and live a straight lifestyle. The newest church outpost here in Portland aims to change the sinful ways of the Rose City: namely the city’s Left-wing, feminist, and pro-queer culture.

Mars Hill is of particular interest to Rose City Antifa because of its extremely conservative social agenda wrapped in a stylized package that appeals to activist youth, specifically targeting young men. Mars Hill has been successful in growing its ranks through its laid back, faux-rebellious image, underpinned by rigid authoritarian values and a hierarchical, patriarchal structure. Pastors utilize social networking sites like Facebook and Twitter to provide a constant stream of church messaging to their followers, and promote a series of Driscoll’s online sermons to broaden their base of support in a franchise-like fashion. Driscoll’s style of sermon, peppered with humor and slang, appeals to a hip, younger audience that may be put off by stodgier, traditional church services. His casual, conversational demeanor, however, belies the intolerant, hard Right foundation of Driscoll’s teachings. The version of “God’s Kingdom on earth” that Mars Hill is explicitly interested in creating is one in which women are subservient to men and homosexuality is banned.