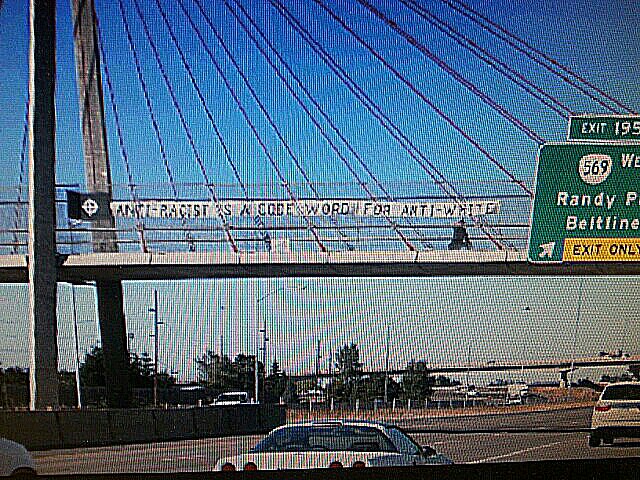 Should read: Anti-Racist Is A Code Word For Anti-White Supremacy!
Originally posted on 09/06/2013

O n September 2nd in Eugene, Oregon, a group of White Nationalists associated with the American Freedom Party, formerly American Third Position, dropped a banner on an I-5 pedestrian overpass just before Exit 195 reading: “Anti-Racist Is A Code Word For Anti White!” The banner also featured a Celtic cross, a symbol frequently employed by White Supremacists.

Just two weeks prior to this incident, on August 17th Oregon AFP members held a rally on the Center St. Bridge in Salem, Oregon which is also set above I-5. The rally was part of a broader project called “Overpasses for Obama’s Impeachment” and coordinated through Facebook and the overpasses.org website. The goal of these party members is to add their support to what they are calling the “Patriot Wave,” which are weekly (and in some cases, they claim, daily) demonstrations which start on the East Coast in the morning and spring up across the country moving westward as the day goes on. While this rally was relatively small, the Overpasses campaign has existed for several months now and has gained the support of “thousands of people” according to claims on the AFP website.

It appears AFP is aiming to benefit off of Obama’s recent and largely unpopular decision to seek a military strike against Syria, using this to push its political agenda of Third Positionism. White Nationalists broadly have used Obama’s election as a means to bolster their numbers in recent years. American Freedom Party in particular has stepped up their political activities in Oregon as well as across the country. The far Right has been effectively leveraging the fear and anger of Middle and Working Class Whites to organize around issues such as widespread economic insecurity, environmental collapse, war in the Middle East, immigration, and lack of health care. Organizations such as the American Freedom Party provide appealing and simple answers to these complex, huge, and terrifying problems. The ideology behind American Freedom Party, Third Positionism, is a modern form of Fascism which combines the language and forms of the current liberal and radical Left with the ideology of the far Right. This ability to confound commonly held ideas of what the Right and Left look and sound like, and the pretense of being reasonable, pragmatic, or even-handed by seemingly borrowing from both, make it a particularly dangerous and effective form of Fascist organizing.
The historical legacy of Fascism is the combination of Left language with extreme Right structures, ideas, and agendas (ie- Populist rhetoric extolling the virtues of the common people  combined with violent union busting as in Mussolini’s Italy). Third Positionism signifies the current manifestation of this tradition. Modern Third Positionists are adept at using traditionally Left subjects and language as a pretext to posit Right solutions to indoctrinate dissatisfied and disillusioned White people to increasingly racist and hard Right ideas (ie- using concerns about the environmental degradation and resource scarcity to offer neo-Eugenicist solutions to “overpopulation” and immigration). Tom Metzger, founder of the now defunct White Aryan Resistance and the man found liable for the 1988 Portland murder of Mulugeta Seraw for inciting racist violence, is a quintessential Third Positionist. Metzger identifies as “anti-communist, anti-capitalist, anti-war, pro-environment, and anti-government”.  While Metzger represents the insurgent vein of Third Positionism, advocating “Lone Wolf” tactics, American Freedom Party represents a divergent tendency in Third Positionism which emphasizes party and mass movement building.

American Freedom Party falls neatly into this camp. With a party platform that seeks to address a wide array of issues ranging from anti-globalization to anti-war and even claiming to be against Fascism, AFP often uses populist rhetoric to provide a flimsy subterfuge. However, it is the message behind this rhetoric, such as their push for “freedom from the immigration invasion” which gives them away as a racist Right organization that seeks to return America back to the "real" (White) Americans. While they claim that they are neither Left nor Right, and a brand new “Third Position” all together, a quick study of the historic marketing of Fascism will show that this is just the same-old sales-pitch their ideological ancestors, Mussolini and Hitler, used. Hitler’s party was called National Socialism after all. And it was Mussolini himself, father of Fascism, who originally spoke of this “Third Alternative”:

"This conflict must not be allowed to cancel out all our achievements of the past eighteen years, nor, more importantly, extinguish the hope of a Third Alternative held out by Fascism to mankind fettered between the pillar of capitalist slavery and the post of Marxist chaos. The proponents of these obsolete doctrines must understand that the Fascist sword has been unsheathed twice before, in Ethiopia and in Spain, with known results."


It is important to point out though that the American Freedom Party’s frustration is not with all Right-wing politics, but with mainstream Republican’s inability to combat an “ever growing threat of invasive liberalism” which they portray as corrupting the country’s traditional principals. These emotionally-evocative ideas of a mythologized and noble national past, and a national culture in dire peril and moral decay are key hallmarks of Fascism. The depiction of a party as being both radical and revolutionary (advocating the overthrow of current regime or mainstream government), as well as traditional and conservative (advancing the idea of a return to “traditional values” and revival of an imaginary, idealized Golden Age based on a racialized national identity) is also typical of Fascist parties past and present. Romantic ultra-Nationalism is the core of Fascism. AFP’s website is littered with calls for European Americans to “push back”, and form a strong Nationalist Party. Even though they claim in their mission statement to not ascribe to “any “ism,” be it conservatism, libertarianism, or nationalism, and certainly not socialism, globalism, liberalism and feminism.”  Their monthly newspaper and “voice of the party” is called The Nationalist Times. It is put out by the American Nationalist Union (ANU) which claims to be the largest Nationalist political organization in the United States.

The American Freedom Party and other organizations espousing Third Positionism are neither a fresh alternative to Right-wing politics nor a whole new dimension of politics altogether, but rather the next phase of Fascist philosophy. The fact that the America Freedom Party is growing bolder and increasing their level of political activity should be taken very seriously. With this banner drop these neo-Fascist, White Supremacists are sending a message of intimidation and terror to people of color, Jews, Muslims, migrants, queer people, and others that they deem not “real” Americans.  As we know from history, ignoring Fascists only allows them the space to increase their power. We believe it is particularly important for Leftists to pay attention to these neo-Fascist Right-wing groups that are are offering an alternative to status quo politics. We should not ever assume that dissatisfaction with the Obama administration, economic injustice, environmental collapse, globalization, and general Capitalist system failures will naturally lead to the material conditions by which the populace will turn to us for revolutionary answers. It is true that in hard times people are receptive to new and more radical ideas, but those may not be the radical ideas of the Left. The anti-authoritarian Left should treat the far Right as a serious enemy. That is why we antifa are dedicated to monitoring their activity, and smashing them now. It is imperative that we confront these organizations at every stage, and on every front, ideological, cultural, and physical, lest they gain any ground to realize their deadly vision.

If you have any information on American Third Position or any other Fascist or White Supremacist activity please contact us:
email: [email protected] (///) voice mail: 971.533.7832