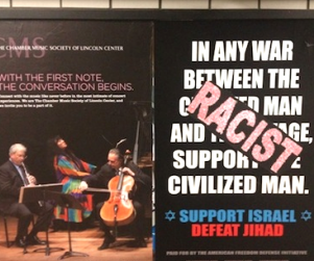 The Islamophobic advertising campaign that has already appeared in New York City and San Francisco has come to Portland . Bus ads reading "In Any War Between the Civilized Man and the Savage, Support the Civilized Man" as well as "Support Israel. Defeat Jihad," will be visible on TriMet vehicles. The ad is financed by the American Freedom Defense Initiative (AFDI) and also promotes the New York-based group Stop Islamization of America (SOIA). The Islamophobic SOIA organization first gained notoriety during the 2010 controversy around the plans for building an Islamic cultural center near Ground Zero in New York City.

Pamela Geller, a central agitator for both AFDI and SOIA who is behind the advertisement campaigns, considers the Obama presidency to be a pawn of Muslim conspiracy, and has suggested that the President is actually an illegitimate child of Malcolm X. Geller’s writings were praised by and cited in the manifesto of Norwegian mass murderer Anders Behring Breivik. Geller, following Breivik’s 2011 attacks, stated that Breivik’s victims at the Utøya camp had they survived would have become “future leaders of the party responsible for flooding Norway with Muslims who refuse to assimilate, who commit major violence against Norwegian natives including violent gang rapes, with impunity, and who live on the dole.”

Rose City Antifascists condemn the Islamophobic advertising campaign and its brazen attempt at spreading fear and hatred against Muslims in the US. Such a climate has led to an escalation of violence against Muslims and those that are perceived to be Muslim. We would like to remind readers of the very real danger faced by Muslims in the face of such bigotry, such as the Muslim Education Center shooting and acid attacks that occurred in Illinois this summer. (Also this summer, white supremacist Wade Michael Page opened fire at the Sikh Temple of Wisconsin, murdering six people there. Sikhism is a religious tradition distinct from Islam, but prejudice against the perceived “other” stoked up by Islamophobic agitation could have combined with Page’s white supremacist ideology in motivating the attack, or Page could have even mistakenly targeted Sikhs believing he was attacking Muslims, as happened in the 2001 Balbir Singh Sodhi murder .)

Applying the label of "savage" to approximately one fifth of the world's population is a propaganda strategy reminiscent of legitimations for genocide against Indigenous people here in the Americas. The ad further attempts to humanize and legitimize state violence and human rights abuses by referring to the policies of the US and Israel as acts of a “civilized man”. Geller’s advertisements appeal to the basest emotional response to target and demonize all Muslims, and can in no way be interpreted as actual critiques of political Islamists. This is made clear by another of Geller’s advertising campaigns that is debuting in Washington, DC , combining an image of the September 11, 2001 WTC attacks with cherry-picked quotes from the Qu’ran, again portraying all Muslims as dangerous enemies.

As indicated in its October 15th press release , TriMet seeks to challenge the Multnomah County Circuit Court ruling compelling the transit authority to accept advertisements that are not purely commercial in nature. In both New York and San Francisco, Geller’s advertisements have been altered by activists who accurately labeled them as “racist”. Rose City Antifascists would be happy to see similar creative resistance in Portland.