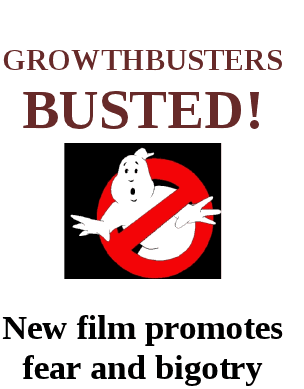 On Thursday, December 8, the Portland State University Women’s Resource Center is scheduled to host an event that promotes bigoted narratives under the guise of environmentalism. “The Earth at 7 Billion: Population and the Future of Life on Earth,” is co-sponsored by the Sierra Club and Population Connection, and will feature the films Mother: Caring for 7 Billion, GrowthBusters: Hooked on Growth, and a talk by John Seager, president and CEO of Population Connection.

GrowthBusters is a prime example of the greening of bigotry. Filmmaker Dave Gardner features several speakers associated with the white nationalist John Tanton (who founded or funds many groups which are featured in the film and promoted on the film’s website). These organizations scapegoat immigrants and people of color for problems as vast and diverse as social strife and pollution, and attempt to inject racist and nativist ideas into the mainstream environmental movement using the frame of “overpopulation.”

As this film aptly demonstrates, it is important to lend a critical eye to pseudo-environmentalist narratives that focus on “overpopulation” as a chief causative factor in environmental degradation as it is a place where far-right, racist groups are finding an ideological toehold. A false assumption underpinning the population myth is that the primary cause of resource scarcity and environmental destruction is that too many poor people, people of color, immigrants, and people in non-industrialized nations are having too many babies. This places blame squarely on the shoulders of those suffering the most devastating effects of white supremacy, colonialism, patriarchy, and other oppressive policies, rather than focusing on the unjust allocation of resources and who actually profits from the systems driving environmental collapse.

Rose City Antifascists believes that screening a film that places the burden of environmental degradation on the poorest, most marginalized communities is in direct contradiction with the PSU Women’s Resource Center’s mission of “advancing social justice” and demonstrates an appalling lack of analysis around the intersectionality of oppression. The WRC was made aware of the information in this article and asked to cancel the event, but they have chosen to move forward with it despite their knowledge of GrowthBusters ’ ties to racist groups and promotion of anti-immigrant and neo-Malthusian narratives. Call the PSU Women’s Resource Center events coordinator, Kari McDonald, with concerns at 503-725-2792 or the WRC general line at 503-725-5672.

For more information about GrowthBusters and Dave Gardner, click here .

For a report on bigotry and the environmental movement (Population Connection can be found on page 14 and 15), click here for a PDF.

UPDATE: As of Wednesday, December 7, the WRC has indicated that they have withdrawn their support from the "Earth at 7 Billion" event and will issue a position statement shortly. A brief explanation of their decision can be found in the comments section of this article and on the WRC events page. It is unclear if the event will still happen without a student group's sponsorship.