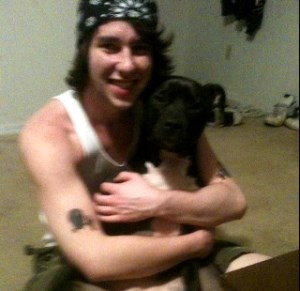 In May 2012 five antifascists were arrested and, in early 2013, took non-cooperating plea deals for 3 felonies each for taking part in emphatically stopping a meeting of white supremecisits organizing under the guise of the Illinois European Heritage Association at a restuarant in Tinley Park, IL.  For more information, see tinleyparkfive.wordpress.com.

Dylan Sutherlin is the fourth of the five to be released, rejoining us in July . Bloomington ABC , NYC ABC , and Sacramento Prisoner Support have launched a campaign to start a release fund for Dylan. By the time Dylan is released he'll have been locked up for just over two years, will have a felony record, and certain things just won't be the same. Lets help him make a smooth transition! Lets raise some money and secure a release fund that will welcome him upon his release.

If you'd like to write to Dylan to let him know you're thinking of him and that you're glad he's getting out soon, I'm sure he'd love to hear from you. His current address is as follows:

You can visit the fundraiser site and make a donation here: http://www.youcaring.com/help-a-neighbor/prison-release-fund-for-dylan-sutherlin/184298#sthash.XEQgtIMc.dpuf