David Irving, Holocaust Denier, Scheduled to Speak in Portland on May 1st 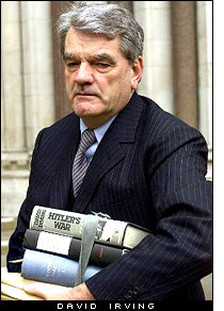 BOOT DAVID IRVING OUT OF TOWN!

David Irving’s last anti-Semitic speaking engagement in Portland was met with resistance from local anti-racist and antifascist groups.  This time, we intend to shut him down.

Irving’s speaking tour serves as a platform for spreading lies and hate, and as a source of income for Irving.

Will we allow a fascist to financially gain from spreading racist propaganda without opposition in the Rose City?

Please join Rose City Antifascists in letting David Irving know that racism in any form is not welcome in Portland. Continue checking our blog for  opportunities to get involved.

For more information on David Irving, please refer to our 2009 Portland Indymedia release here , and South Side Chicago ARA's release below the cut.

The notorious holocaust denier and Nazi sympathizer David Irving is at it again, attempting another US tour of thirty cities across the Southern, Western and Midwestern states. The topic of this year’s speaking engagements? “The Life and Death of Heinrich Himmler, Hitler’s lieutenant.” Irving’s fraudulent and methodical endeavors to rewrite history commonly attract other neo-Nazi miscreants and white supremacists to his gatherings. We’re calling upon anti-racist organizations and individuals to confront his tour every step of the way, and send a clear message that revisionism and fascist organizing is not welcome in our communities. His troubled recollection of basic history must extend to the more recent past, when he encountered fierce antifa resistance the last time he came to the states in late 2009. The fact that Irving can’t go out in public without facing angry mobs trying to run him out of town has forced Irving to organize in secret, going through great lengths to screen potential attendees to his event, never revealing the location until the last minute, and hiring private security. This has never stopped protesters from shutting down his events nor has it provided any sort of security or privacy for the racist scum that attempt to hear Irving speak.

In New Jersey , dozens of anti-fascists filled the Pompton Plains hotel, chanting and struggling with attendees.  They were so effective in disrupting the event that police had to escort attendees out. The same happened a day later in NYC , where the event was not only disrupted, but both Irving’s tour manager Jaenelle Antas and neo-Nazi friend Alex Carmichael were pepper-sprayed. Faced with humiliation and defeat, Irving was forced to cancel his next few scheduled appearances, but the chaos did not end there. Days later his Chicago event was shut down when dozens of masked anti-fascists stormed into the Edelweiss restaurant turning over tables, destroying his merchandise, and assaulting attendees, while Irving and Antas locked themselves in a supply closet in a magnificent display of cowardice.

Right in the middle of his failed east coast appearances, his websites were also attacked by anti-fascist hackers who released his private emails and databases to WikiLeaks . The emails gave hilarious details of the frustrations caused by Irving’s infatuation with his much younger assistant Jaenelle , and also eventually caused his landlord to kick Irving out of his Winsdor home . More importantly, this leak revealed private speaking locations as well as names and addresses of dozens of racist Nazi sympathizers who purchased tickets – a warning to those who would consider purchasing a ticket to Irving’s gatherings.

The conflicts that populated Irving’s 2009 tour exemplify the danger that venues are sure to face should they host his events. Irving, fearing confrontations during his tour, had hired “Tip of the Spear,” a group which advertises private security for white power events. At the 2009 Palm Beach function, the very people he hired for security had initiated a knife fight amongst warring neo-Nazi attendees Christopher Nachtman and John Kopko . The event was booked under Focal Point Productions and the Ritz-Carlton had no idea who Irving was. Additionally, one person attending last year’s Chicago function, John Gisselbrech, was hospitalized during the antifa disruption, hurt so badly that he has hired the prominent Deratany Firm to file a lawsuit against David Irving, his publishing company Focal Point Productions, and Edelweiss Restaurant (who hosted Irving for the second year in a row) for failing to make adequate security precautions. The million dollars at stake may shut down these businesses down–yet another warning of what might happen to spaces that host fascist speaking events. Further, they give warning to the puerile few considering attending, as to just what might happen if they do attend. They will be confronted, exposed, shut down, and humiliated.

Interestingly, David Irving’s tour manager and personal assistant for the second year in a row is Jaenelle Antas (7823 Ella Dobbs Ln, Indianapolis, IN 46227 317-379-8871 / 305 923 9400). Despite the unforgettable troubles stemming from the 2009 tour (the pepper-spray and Irving’s elderly sexual advances) is giving him another chance and is handling all booking and ticket sales for his tour. The former Assistant to the Chair of the Indiana Libertarian Party, Jaenelle is also involved in her local white supremacist scene in Indianapolis, belonging to the hate group “Hoosier Nation” which is organizing to support Indiana’s anti-immigrant bill SB590 .

David Irving, much like our own Chicago-based holocaust denier (and Northwestern University professor) Arthur Butz (2214 Central St, Apt 3 Evanston, IL 60201) and all other proponents of holocaust denial, have a very specific agenda that, upon further examination, has less to do with spreading their distorted fantasies, and more about Nazi sympathy, scapegoating Jews, and legitimizing racism. Holocaust deniers are attempting to lift the taboo off the holocaust in order to make Nazism a more accepted mass political ideology; in other words, they deny the holocaust so that it can happen again. Even some Nazis, such as William Pierce, find this to be absurd, claiming that holocaust denial proves one to be incapable of living up to the duties of white nationalism. Pierce and those who recognize that the holocaust happened believe it is something to be proud of and feel it should be understood as something necessary.

We anti-fascists find this historical perversion appalling, but — more importantly — find it an impetus to destroy their quest of creating a potential for fascism to gain ground. David Irving’s attempts to legitimize such a movement and to victimize Nazis as being bad jacketed must be met with organized militant resistance and shut down everywhere he attempts to make an appearance.

The Anti-Racist Action Network’s first point of unity: “Whenever fascists are organizing or active in public, we’re there. We don’t believe in ignoring them or staying away from them. Never let the Nazis have the street!”

Below are the dates and locations where David Irving is scheduled to make an appearance. He frequently books his events under fake names to mislead the venues into not knowing what exactly they are getting into, and to prevent the possibility of being confronted by anti-fascists.