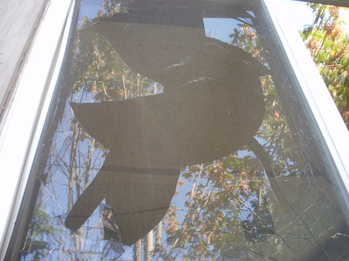 On the early morning of October 6th, a rock was thrown through the home window of a worker at the Red & Black Café who is active in co-op circles. Writing on the rock read: “RCA [Rose City Antifascists] fuck off”. While the person targeted is not a member of Rose City Antifascists, the attack on the home was clearly designed to send a message of intimidation to broader anti-racist circles. Anti-racists in Portland will not step back any of their efforts as a result of the home vandalism.

The rock-throwing took place the day after the Red & Black Café collective decided to endorse the Rose City Antifa call for Citybikes to be boycotted . Rose City Antifa issued that call for a boycott due to years of antisemitic activism and promotion of militant racists by Citybikes President Tim Calvert. The Red & Black Café is a worker-owned cooperative business in Portland also affiliated with the local branch of the Industrial Workers of the World.

The co-op activist whose home was targeted had previously worked independently of RCA within the co-op movement, trying to raise the issue of Tim Calvert’s antisemitic activism within the Western Worker Cooperative Conference (WWCC) at a time when Calvert was part of the WWCC Board. Tim Calvert’s ally Rod McLaughlin (AKA “Jay Knott”), another hardcore antisemitic propagandist who maintains the Pacifica Forum website, wrote about this co-op activism in a March 2012 article titled “Zionist Bullying in the West Coast Co-op Movement”. The alleged “Zionist bullying” was speaking out against the  Judeophobic agitation that Calvert engages in alongside racist, anti-choice and anti-queer organizers. McLaughlin’s article quotes emails that were sent as part of WWCC discussions, suggesting that someone in the co-op movement leaked or forwarded these communications to Calvert’s bigoted friends. The Pacifica Forum, whose website McLaughlin operates, is notorious for hosting speakers such as Jimmy Marr of the National Socialist Movement. We are alarmed that discussion from the co-op movement was passed on to McLaughlin and possibly other political associates of Calvert.

Rose City Antifascists are looking into all angles surrounding the targeting of the home. We are committed to defending those singled out for being anti-racists, whether or not they are active within our organization.

We are currently accepting donations for the person whose home was targeted, for window replacement and related expenses, which we will pass on directly. Please, if sending funds, also send a brief note to our main email letting us know that funds are earmarked for solidarity with the targeted co-op worker.