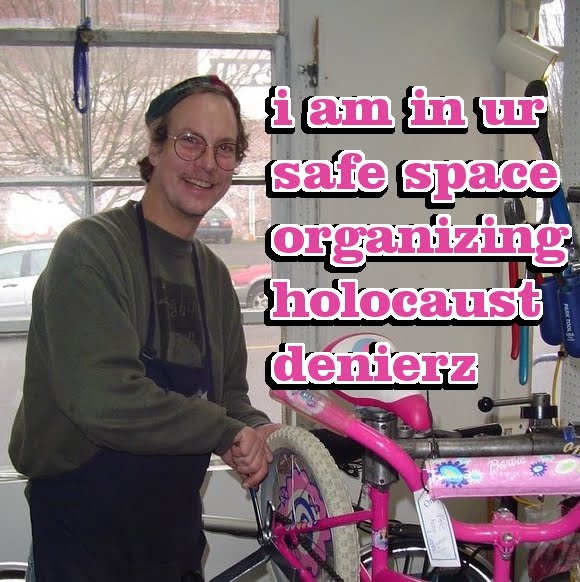 Since 2009, Citybikes Workers’ Cooperative in Portland, Oregon has known about the deep involvement of a key figure of their co-op in antisemitic organizing--political work done in collaboration with white supremacists, Holocaust-deniers, and others on the extreme-Right. Tim Calvert, the Citybikes President at the time of writing, is defended and promoted by the rest of the co-op, who attempt to maintain a progressive image while propping up their antisemitic President. Anti-racists first raised the issue of Calvert’s antisemitic organizing in 2009, after Calvert and his cohorts in the Portland 9/11 Truth Alliance hosted a speech by Valdas Anelauskas, a racist organizer who proclaims that evidence for the Holocaust is “shaky.” Citybikes mishandled its response during 2009, making excuses for Calvert and declaring that no problem existed after Calvert issued a bogus apology, even though Calvert’s organizing against Jewish people continued unabated. In September of this year, anti-racists again drew attention to Calvert’s antisemitic organizing. In particular, we noted that Calvert twice gained venues for Fritz Springmeier, an antisemitic author convicted of bank robbery charges alongside a white supremacist accomplice. (Springmeier’s 1997 robbery plot also involved detonating a bomb at an adult video store as a diversion.) Footage of the Citybikes President giving an extreme antisemitic speech was also pointed to at this time, and Rose City Antifascists provided an extensive chronology of organizing by Calvert and his Portland 9/11 Truth Alliance organization. Now, Citybikes having discussed their President’s organizing yet again, the co-op has refused to take substantive action on this escalating community problem.
​On the morning of Monday, September 24, 2012, Citybikes held a meeting regarding the latest revelations concerning their President’s antisemitic organizing. A representative of Rose City Antifascists contacted Citybikes later that day, asking for clarification about any plan of action the Citybikes co-op may have to finally address Calvert’s bigoted activism. Citybikes refused to give any clarification regarding the co-op’s position, despite having several years ago made an empty statement that it “recognize[s] the need for communication” on this matter. Silence from this business is unsurprising, given that Citybikes has already spent three years being negligent on this issue and supporting its antisemitic President. Citybikes' refusal to take any action (even in the face of much new information on Calvert’s political work and associates) now compels an anti-racist response.

When we first alerted the community to Tim Calvert’s extreme-Right organizing back in 2009, the initial response of the Citybikes Board of Directors was not only to side with and praise Calvert, but to label our organization as “fascist” for criticizing Calvert’s antisemitic activism. This Citybikes statement accused anti-racists of “shutting down disparate voices” by mentioning and speaking out against Calvert’s work with a white supremacist. Ironically, it was the Citybikes collective who shut down disparate voices: their business later retracted its first statement because it was “was not released with consensus from all members of the Board, nor did it pass through the hands of each and every worker.” Citybikes also insisted that it would be illegal to fire Calvert, a clear misrepresentation of Oregon as well as federal law for the business’ own purposes. The Citybikes business later issued a vague and noncommittal statement about “the need for communication”. Citybikes proceeded to stand by Calvert as he publicly complained that his critics were on a “Stalinist” (later also described as “Zionist”) crusade against him.

Some critics of Rose City Antifascists defend Tim Calvert’s antisemitic organizing as a free speech issue. The First Amendment and related free speech laws protect citizens from state interference, not from criticism by the public. Our organization has always been clear that we do not call for any sort of government intervention regarding hateful speech, by Calvert or anyone else. We aim to address issues of racist and extreme-Right organizing within communities, not to trust or engage the courts, or to ask for government action. We oppose calls to fight fascist movements through increases of state power, as this firstly treats the state as an allegedly neutral tool and conceals institutional racism. Furthermore, increases in state investigative and prosecutorial power against alleged “extremism” can facilitate crackdowns on protest and social change movements in general, which we oppose.

Our organization believes that communities should unite in opposition when white supremacist, fascist, or antisemitic organizers attempt to target sections of the population. We believe that when white supremacists and fascists organize, they inevitably try to exert their strength against those they perceive as enemies--people of color, Jewish people, workplace organizers, sexual minorities, Leftists, and other groups. Watchfulness on the part of communities is therefore appropriate, including strong responses to antisemitic agitation--such agitation has historically tended to explode into sudden and extreme violence when allowed to spread. Organizing such as Tim Calvert’s, in spreading lies about Jewish people, creates favorable conditions for such violence. Tim Calvert, who twice secured meeting locations for an extreme-Right bomber, should not play innocent about the climate he is creating and its consequences.

Our organization is a militant one and we believe that force may at times be a necessary component in resisting fascist and white power organizing, if the alternative is simply to stand by and allow assaults, organized persecution, bombings or killings to take place unopposed. Our campaign in documenting and drawing attention to Tim Calvert’s activism, however, has been one of ideological confrontation. Through his Jew-hating activism Tim Calvert made himself a public figure, and thus became subject to public scrutiny and criticism. Calvert should expect antifascist criticism to be loud and unrelenting.

Rose City Antifascists asked Citybikes--a business with a progressive and community-oriented image--to say that antisemitic agitation and racist propaganda do not serve their community. We requested that the business take a concrete stand against such agitation, when a central co-op member worked for years spreading antisemitic lies and hosted a white supremacist. Calvert gains activist prestige and political credibility from his co-op work, because his workplace is falsely viewed as a progressive institution. This prestige and power is then used by Calvert to promote hatred of Jewish people, and to organize with racists and anti-gay bigots. If Citybikes is unhappy about the antisemitic organizing of their President, then it should certainly take action about this.

In Rose City Antifa’s first discussion of Calvert’s organizing, we argued that “If a collective or co-op can't deal properly with an anti-Semitic activist within its ranks, then it does not deserve to be supported.” We stand by these words over three years later. We have seen that quietude and tacit acceptance only allow antisemitic organizing to continue, escalate, and grow even more extreme. Silence and denial are not the answers. We call for a complete boycott of Citybikes.

Some Things You Can Do to Support the Citybikes Boycott

(1) Remove any links to Citybikes on your website or Facebook page. If you have been giving advertising to Citybikes, tell them why you are stopping.

(3) Tell your friends why you are supporting other Portland bike shops, and mention this when making purchases at these other establishments.

(4) Organize in the co-op community to oppose racist, antisemitic, anti-gay, transphobic, and anti-women politics. Realize that these problems affect participation within the co-op movement, and erode any claims of equitable workplace involvement.

(5) Keep an eye out for updates and share them with your friends, community organizations, as well as bike-related social groups.

(6) Contact Rose City Antifascists about any responses from Citybikes, or updates on Calvert’s bigoted organizing. Our email is info [at] rosecityantifa [dot] org.