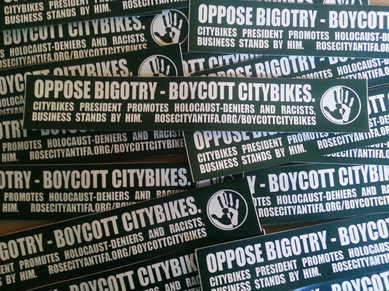 What are we going to do with all these stickers?
Originally posted on 06/05/2013

After nearly four years of argument and controversy, Tim Calvert is no longer employed by the Citybikes Workers Cooperative. Calvert--a former leftist, conspiracy theorist and hardcore antisemitic activist who promotes and hosts figures from the extreme-Right--had previously served as the President and a public representative for Citybikes, a Portland business that also attempted to maintain a “progressive” image contrary to Calvert’s actual political work.


In a telephone call made June 4, a representative of Rose City Antifascists was able to confirm Calvert’s departure from Citybikes, something which had previously been rumored. Rose City Antifascists are pleased with this news, which will allow both the Citybikes business and our organization to move on, and which we hope will be a positive development for both. The formal boycott of Citybikes which our organization launched in September of last year--in response to Calvert’s escalated organizing with extreme-Right militants, ideological racists and Holocaust-deniers--is now at an end. (For a chronology of Calvert’s organizing and that of the Portland 9/11 Truth Alliance with which he worked, see here .)
The saga of Tim Calvert, Citybikes, and Portland anti-racists is at this point a long one. Our organization took a strong stance against Calvert and his associates in the Portland 9/11 Truth Alliance, after that Alliance hosted Valdas Anelauskas--an extreme antisemite and self-professed “racialist”--in Portland on June 10, 2009. In our organization’s statement following the anti-Jewish/white nationalist conspiracy event, we strongly condemned Calvert’s politics and advocated for Citybikes to fire him:


“Rose City Antifa calls for the Citybikes Workers' Cooperative to remove Tim Calvert from the co-op, and to thereby stop putting food on his plate. We believe that those pushing organized Jew-hatred and pogrom politics should be collectively resisted. If a collective or co-op can't deal properly with an anti-Semitic activist within its ranks, then it does not deserve to be supported.”


This intervention from our organization led to significant controversy. From the perspective of our organization, it also revealed a major need for education in Portland “progressive” and leftist political communities regarding antisemitism, which had too-often been left unidentified or unchallenged in our political circles up to that point. (To their credit, Laughing Horse Books, with which Calvert had also been involved, quickly removed him from their collective in the aftermath of the Anelauskas event.) This work of challenging antisemitic organizing in general and Tim Calvert’s efforts specifically was taken up by others outside of Rose City Antifascists, in particular local members of the co-op movement who challenged Calvert within that domain.


While the 2009 scandal regarding Tim Calvert and his extreme-Right political associates provided an opportunity for educating about and strongly opposing antisemitism, it did not displace Calvert from Citybikes or sufficiently deter his political organizing. This topic of Calvert’s bigoted organizing thus resurfaced in September of last year, when our organization revealed that Calvert had twice secured venues for Fritz Springmeier , an antisemitic author convicted of bank robbery charges alongside a white supremacist accomplice. (Springmeier’s 1997 robbery plot also involved detonating a bomb at an adult video store as a diversion. Some evidence also links Springmeier to the militant anti-choice Army of God clandestine network.) In addition, Rose City Antifascists pointed towards online footage of Calvert giving an antisemitic speech, which included Calvert’s promotion of a book by white supremacist John Coleman. At the time, Citybikes refused once again to address the problem of their President’s organizing with figures of the extreme-Right, which led to our formal announcement of an anti-racist boycott of the business . At least a couple of Citybikes employees left the business in the aftermath of the 2012 revelations surrounding Calvert.


At present, our organization does not know all the circumstances surrounding Tim Calvert’s ousting from Citybikes. However, we see it as an extremely positive development, and perhaps represents an opportunity for the business to begin afresh unburdened by Calvert’s political associations and advocacy. Our organization with the outset of the Citybikes boycott also urged for a public apology from Citybikes, which had reacted poorly to our information and demands over the years. We also asked for Citybikes to commit to meaningful anti-racist and anti-oppression internal education within their cooperative. While we still believe that the latter idea may be useful and would encourage it, at present we simply do not see any political advantage to insisting on a public apology. In ending our boycott and the Citybikes campaign after the latest good news, Rose City Antifa can prioritize other efforts and also work to develop broad educational resources not centered around a four-year-old political controversy. Our organization remains committed to exposing and militantly confronting racist, antisemitic, and fascist political organizing wherever it may surface.


While we believe that Calvert’s departure from Citybikes represents a direct or indirect political victory, it is not just one for our own organization, but for much broader circles who spoke out and maintained political pressure throughout this conflict. It is only through the perseverance and sacrifices of dozens of people not formally associated with our organization--as well as public support from hundreds more--that anti-racists were able to send a clear message: racism, antisemitism, Holocaust-denial, anti-women and anti-LGBTQ organizing are unwelcome. We’re in it for the long haul: for any readers considering a run of bigoted organizing or a career on the extreme-Right, it may be prudent to reconsider.