Early in 2021, O’Malley revamped the Northwest Front website with a slightly modified domain (.info instead of .org). Like many far-right websites, this domain is registered through Epik and hosted on HQHOST (Overoptic Systems LTD). He also resumed the “Radio Free Northwest” podcast through which he releases his white supremacist talking points on a weekly basis. True to the vision of the Northwest Territorial Imperative, O’Malley is living in the Pacific Northwest just blocks from Kinnear and Kerry parks in Seattle, Washington. 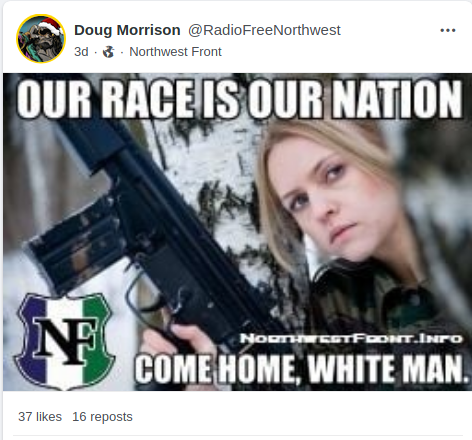 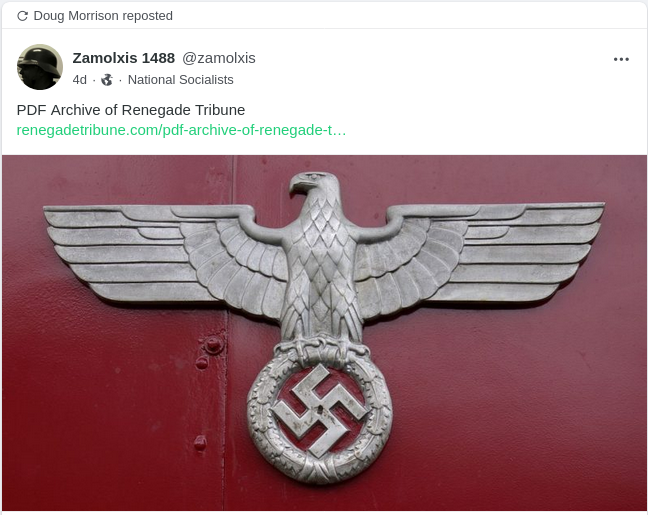 We have written extensively about the history of the Northwest Front and Harold Covington. After Covington died alone and estranged from his family, the successor of the original Northwest Front ended his involvement in hosting the website. The site went dark until Christopher O’Malley purchased a slightly modified domain and resurfaced the original NWF content. O’Malley refers to Covington with affinity as “the old man” and regularly quotes Covington: “To the Jewish people, we say nothing. There is nothing to say. For you, there shall be only endless night.”

“the new dispensation of Adolf Hitler and National Socialism which was given to the world in the middle part of the last century.” - Harold Covington

The Northwest Front has attracted neo-Nazis across the country. Dylann Roof, Rinaldo Nazzaro (founder of The Base), and many well-known white supremacists have either been NWF members or cited the project as an influence.

Beyond just an archival effort, O’Malley took up the mic to host a new version of the Radio Free Northwest (RFN) podcast. In the first RFN reboot episode, he distilled the goals of the Northwest Territorial Imperative:

“White man, it is time to come home. Take a look around you into the America that you live in. It’s all about survival now folks. Your skin is your uniform. National Socialists, Christian Identitarians, Asatru, constitutionalists, tax protesters, libertarians, Christian conservatives, home schooler, gun rights activists, klansmen, whatever… We are all white and the homeland is for all of us.” - Christopher O’Malley

This broad appeal to The Right is part of ongoing efforts to mainstream white nationalist ideology. Like Tucker Carlson introducing Great Replacement conspiracy theories on Fox News or Proud Boys showing up to school board meetings, far-right actors are eager to bring their message to a larger audience. While many white nationalists shroud their rhetoric to accomplish this goal, O’Malley is clear about his racist beliefs:

“Racism is, in fact, the purest expression of patriotism… The idea that we’re supposed to share this land in some kind of grotesque, squalid, multi-racial Babylon is simply stupid.”

Even still, O’Malley took steps to compartmentalize his white nationalism and tried to keep “Doug Morrison” very separate from his “normie” life; he emphasizes this strategy here in later podcast episodes.

He is aware that Enotes.com (his last known employer) and others might not be thrilled to have a staff member reading manifestos inspired by The Turner Diaries. Under his real name, he is the respectable Seattle techie; behind his pseudonym, he is beckoning other neo-Nazis: “we’re telling you to come home to the Pacific Northwest because this will be the future home of all Aryan people - right here. The Southwest is going the way of Mexico… The Southeast is n****r land; that’ll be Wakanda or something like that. The northeast is the power structure of the Zionist occupied government…”

Behind a microphone and a keyboard, “Doug Morrison” boldly proselytizes around his neo-Nazi beliefs while, as Christopher O’Malley, he tried to be meticulous in keeping his bigotry secret from his employer and his Seattle neighbors. Like Covington, O’Malley uses technology and podcast scripts to spread white nationalist propaganda. But O’Malley’s project, like Covington’s, will fail. Antifascists across the Pacific Northwest will never let our communities become the homeland for fascists and white nationalists.