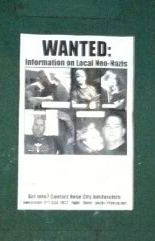 On the night of Saturday, December 11, militant anti-racists distributed over a hundred “Wanted” posters in Oregon City and downtown Milwaukie. The posters, which were stapled and pasted in both locations, ask for community members to provide information on individuals associated with Volksfront International. Read the Rose City Antifa release about this action here .

The following day, December 12, Rose City Antifa released another appeal for information, leaking 120 photos of Volksfront members and their gatherings to the activist website Portland Indymedia, and again asking for information on those pictured. See the albums here .