Unicorn Riot recently released the chat logs of the white nationalist group Identity Europa, which contains almost 250k messages from approximately 900 unique users. After these logs were released, the organization clumsily attempted to re-brand itself as the “American Identity Movement,” but has been unable to stop the steady flow of revelations about the identities and beliefs of its racist membership. This brief article will reveal the identity of “DeusVolk” to be San Diego resident Alex Loupe, but for context, we also recommend anti-fascist articles on other southern California members such as Derek Magill, Patrick Kevin Kelly, Christopher Thompson, Joe Arrigo, Blaze Kody Spon, Kyle Aaron Scheuerlein, Sean Miner, Logan Piercy, Courtney Piercy, and NoCARA’s articles on DIY Division aka the Rise Above Movement.

Alexander Loupe is a San Diego area member of the white nationalist “American Identity Movement,” the group formerly known as Identity Europa. Since late 2017, this Southern California racist and antisemite has put up white supremacist propaganda in San Diego and at college campuses across Southern California, while holding a day job as a custodian with the San Diego Unified School District. Loupe, who posted in the Identity Europa Discord servers under the username “DeusVolk,” works within IE/AIM on the recruitment and integration of new members by conducting interviews with prospective members, connecting individuals new to the Discord server with their respective regional coordinators, organizing social events, and orchestrating flyering campaigns for his local Southern California chapter. An antisemitic, Siege-posting, white nationalist propagandist like Alex Loupe absolutely should not be a paid employee of San Diego United School District, with privileged access to the campuses and classrooms where children attend class each day. Below we provide a broad account of Alex Loupe’s extensive white supremacist organizing activity in SoCal as a member of Identity Europa/American Identity Movement. Please take a moment to contact Loupe’s employers at San Diego Unified School District via phone or email and demand that they stop paying this racist, antisemitic, white nationalist recruiter to spend time in the city’s public schools. 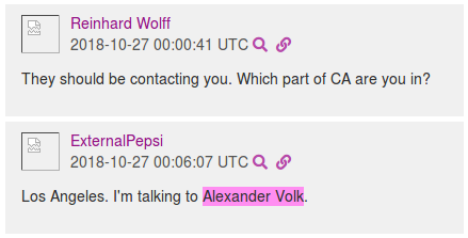 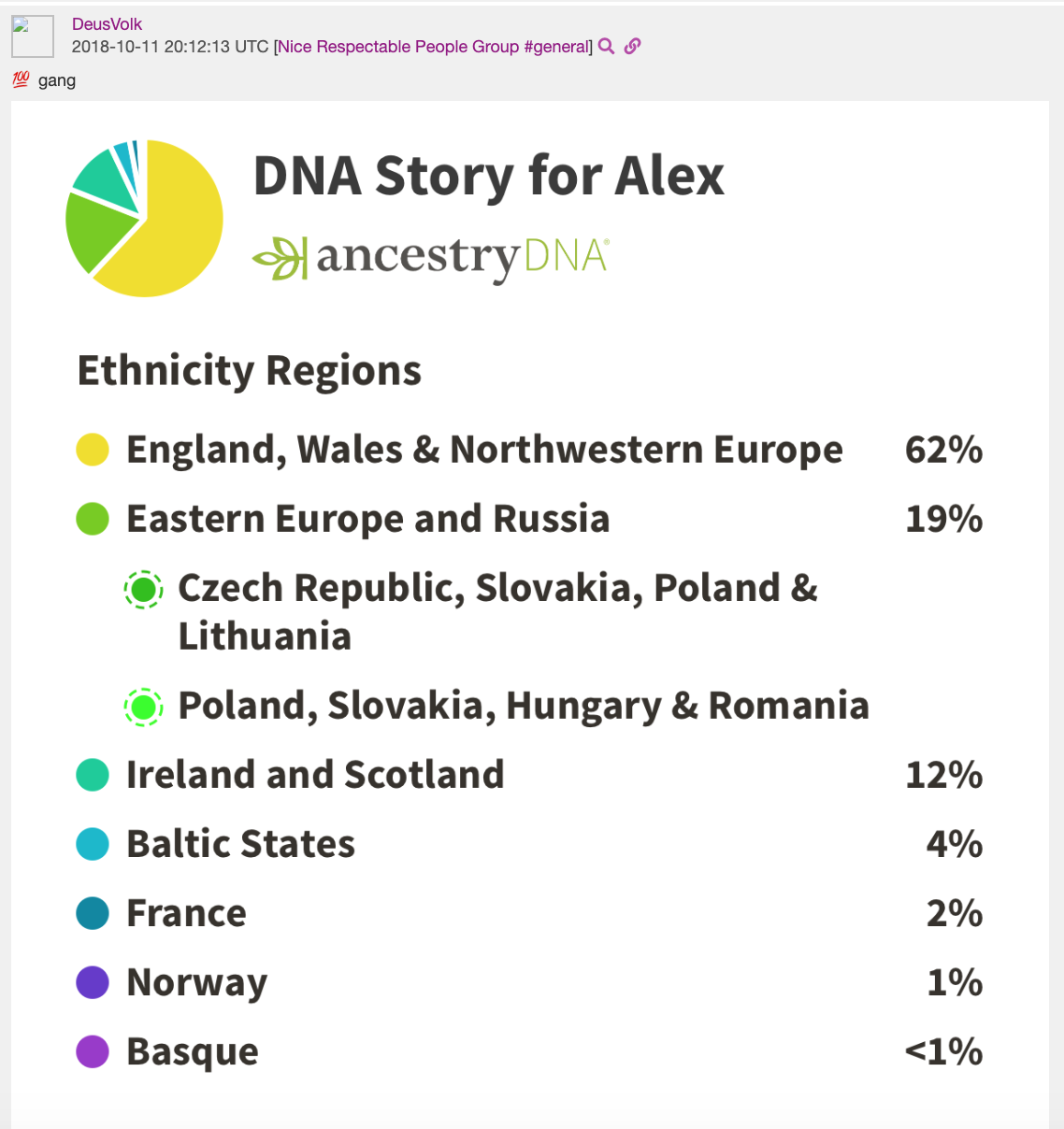 IE Discord user DeusVolk shares a screencap from his own AncestryDNA results, which are addressed to “Alex” 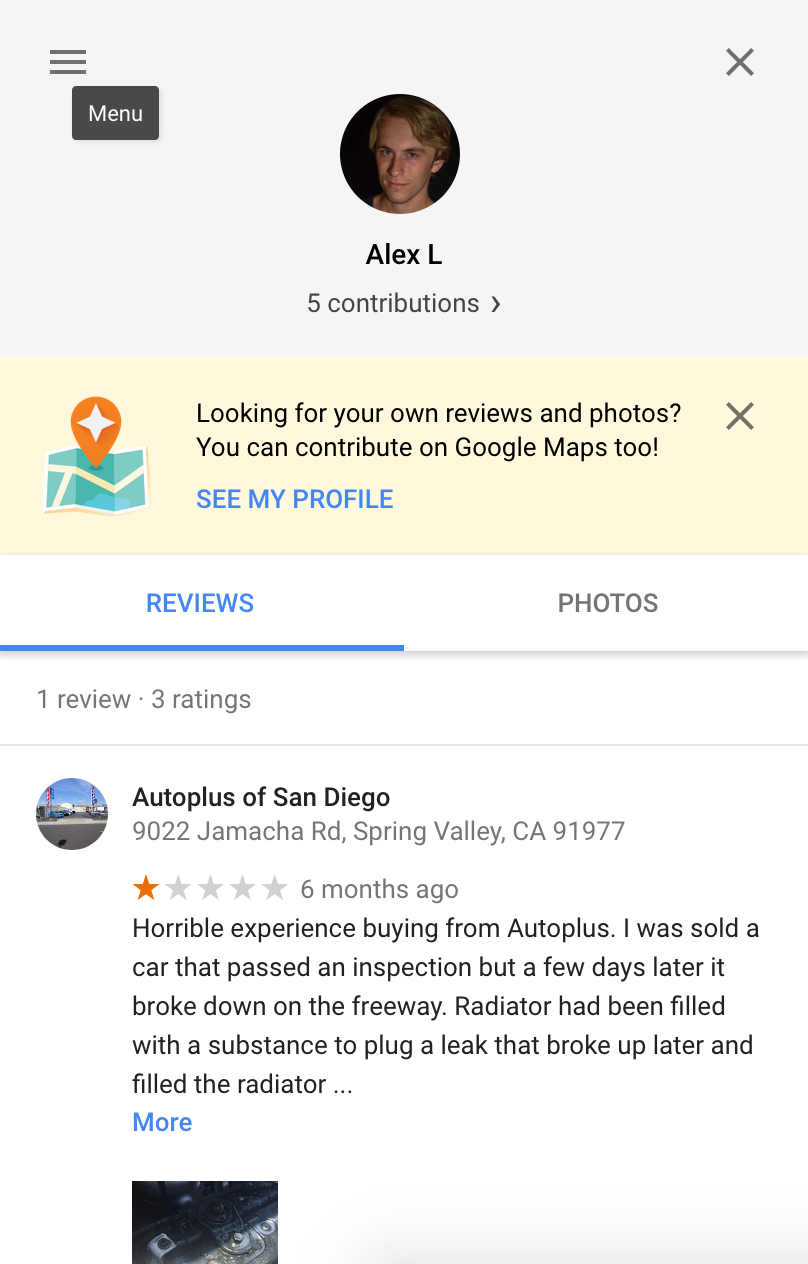 This was one of multiple Google Reviews profiles identified as being IE affiliated based on it’s targeted activity on pages linked to in the IE Discords with requests for members to go give positive/negative reviews. The profile is for an “Alex L,” and the profile image is a picture of Alex Loupe 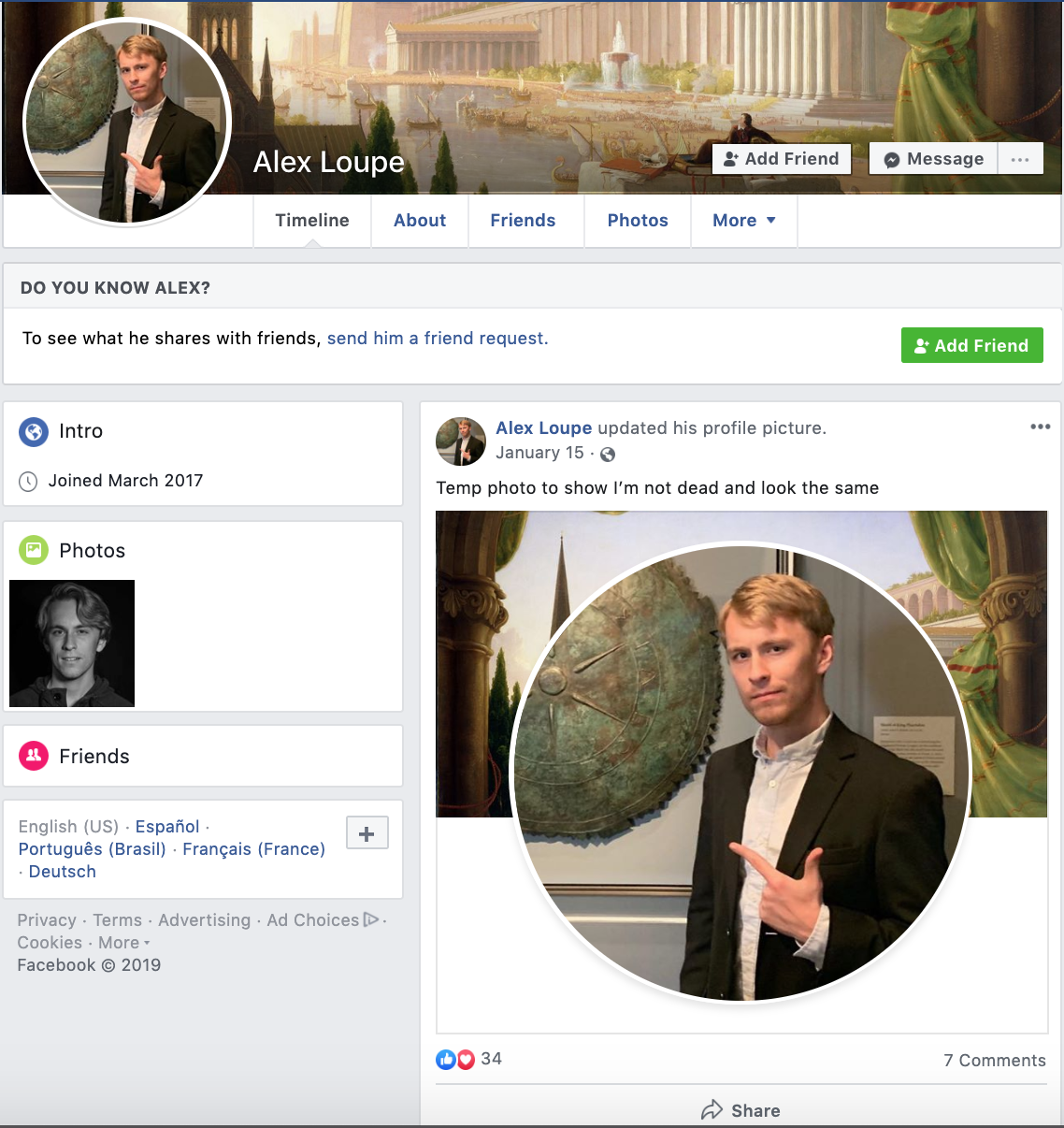 Loupe’s activity in the Discord logs under the handle “DeusVolk,” and his membership in Identity Europa, both began in October 2017, just two months after the Unite the Right rally in Charlottesville where Identity Europa was one of several prominent white nationalist groups in attendance. At the rally a member of Vanguard America, another prominent white nationalist organization, murdered anti-fascist counter-protester Heather Heyer. Loupe describes himself in the Discords–in somewhat self-contradictory terms–as a “former Marxist, ex-“Clintonite,” and “former Bernie Bro” whose post-election anger quickly turned to budding white nationalist fervor once he embraced his feelings of resentment and hatred toward brown and black immigrants. While not all members of the California IE/AIM chapters began their far-right radicalization as liberals/leftists like Loupe, his story of white Californian paranoia and racism toward immigrants fueling his white nationalist organizing is a common one among California chapter members, as well as throughout Southern California history.

In an IE Discord discussion about how difficult it is “subvert” other different political ideologies by pointing out the merits of white nationalism, Loupe as “DeusVolk” asserts that as a “former Marxist,” he has reason to believe that Marxists are easier for white nationalists to win over ideologically. Throughout the conversation, it remains unclear whether Loupe believes his “Marxist” phase happened when he supported Clinton, or when he supported Sanders

A now-defunct Twitter account of Loupe’s tweeted with thinly-veiled paranoia about immigration into California dated the day before Trump was elected–at this point, he would presumably still have been in the “Bernie Bro” phase of his political journey towards white nationalism. 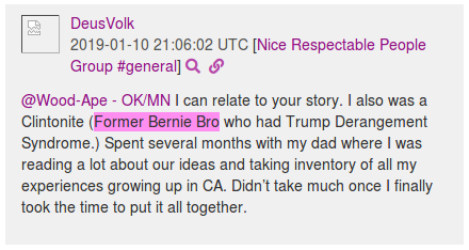 Alex Loupe, aka Discord user “DeusVolk,” describes his political trajectory from Clinton supporter, to Bernie Bro, to openly xenophobic white nationalist in a conversaton with a fellow IE member in the logs, specifically citing talking and reading with his father about his “experience” of being white in California and having to exist next to non-white people from other countries (aka his xenophobia) as a central factor in his radicalization

Loupe as DeusVolk compares the experience of living as a white man in Southern California among thriving immigrant communities to being forced to reckon with exploitative reality outside the simulation in “The Matrix.” After the “red pill vs blue pill” concept, this kind of over-wrought whining about how hard it is to be a white man is probably the second most common alt-right allusion to “The Matrix.” Most white nationalists prefer to conveniently forget that both of the creators of said film are trans women, because, as already stated, reality is just really hard for them 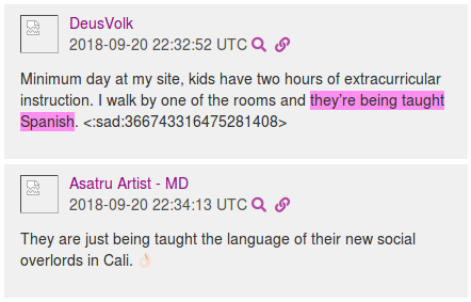 Alex Loupe complains about children being taught Spanish at the school where he works as a custodian.

The California chapters of Identity Europa/American Identity Movement, and the Southern California chapter in particular, have been responsible for disseminating racist and white nationalist propaganda on campuses and in cities across the state over the past few years. Alex Loupe has played a substantial role in spreading white nationalist messaging throughout the San Diego area over the last 18 months; that also happens to have been the 18 months leading up to last month’s April 27 shooting at the Chabad of Poway Synagogue in San Diego, in which a local neo-Nazi murdered one congregant, Lori Gilbert-Kaye, and injured three others, including an 8-year-old girl. 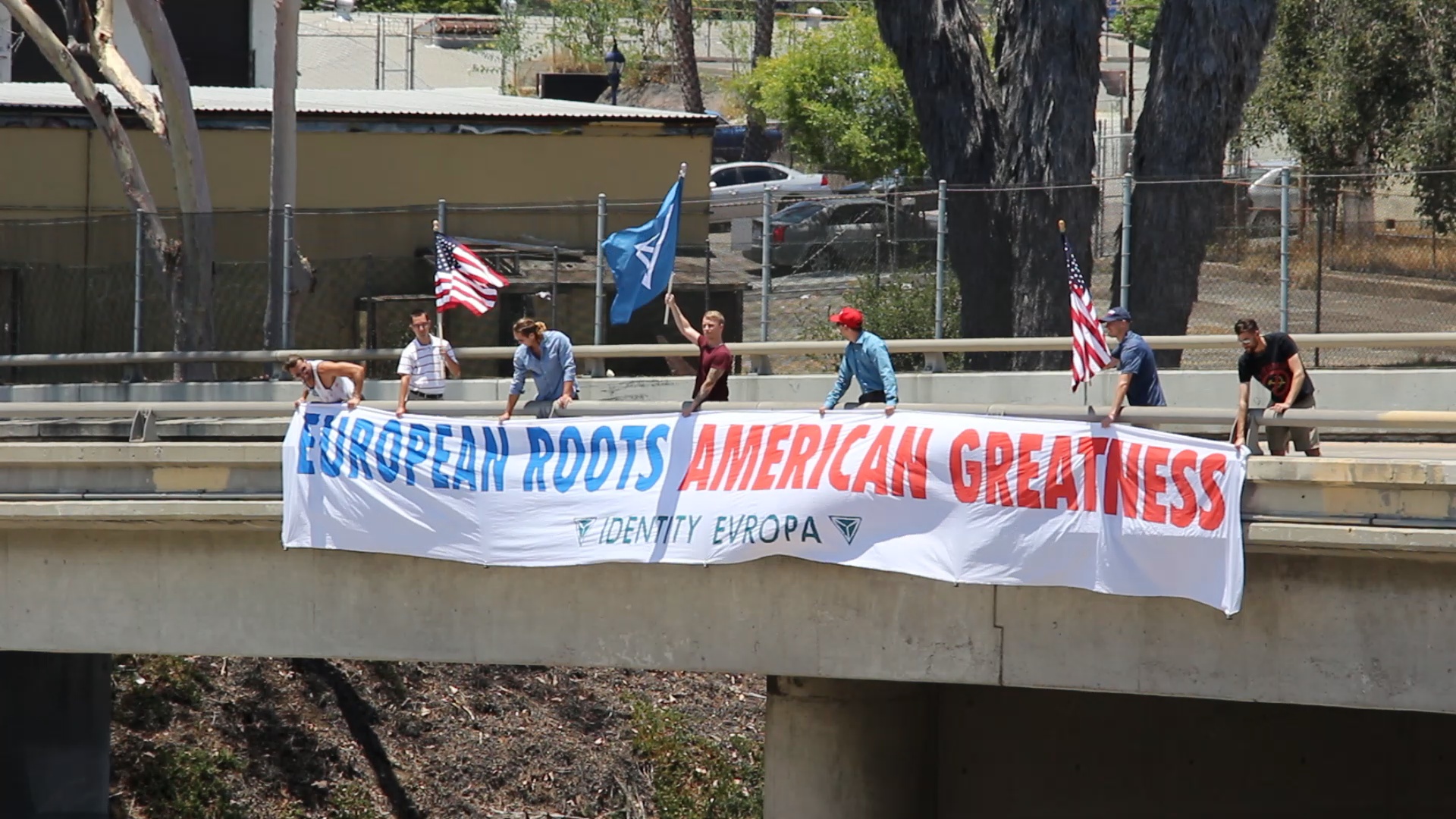 A photo posted in the Discord chats of the July 4, 2018 banner drop Alex Loupe participated in on a San Diego highway overpass. Loupe can be seen near the center of the banner, wearing a maroon T-shirt and holding a flag with the Identity Europa logo on it.

In a Discord post from March 2018, Alex Loupe discusses a recent Trump Rally in San Diego that he attended for the purpose of networking with other far-right groups and interested individuals on behalf of Identity Europa. He specifically mentions a connection with a local member of the “Red Elephants” a broadly right-wing media organization. 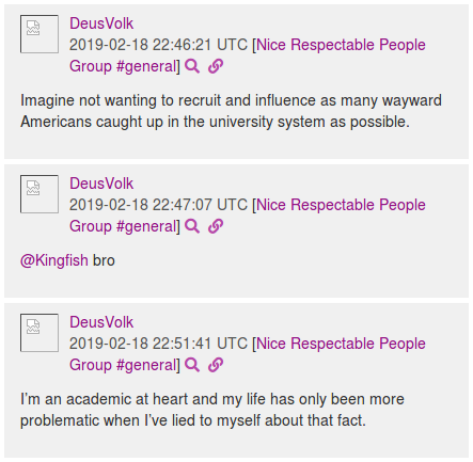 During a debate with a fellow IE member about the usefulness of attempting to recruit within (presumably more liberal) university contexts, Alex Loupe makes clear that he specifically hopes to use his presence in academic spaces to promote white nationalist ideas and recruiting his fellow students into white supremacist organizations like Identity Europa/American Identity Movement.

Former SoCal chapter coordinator and Charlottesville attendee Logan Piercy at one point refers to Alex Loupe/“DeusVolk” as the SoCal IE/AIM chapter’s “local flyering officer and photographer,” responsible for both participating in area flyering and taking/uploading photos of flyering to be posted on IE social media. Between the fall of 2017 and early 2019, Alex Loupe has put up flyers/stickers and staged banner drops of white nationalist Identity Europa propaganda in the following locations:

Alex Loupe makes grandiose, vaguely apocalyptic statements about the danger of feminism in the Discord, suggesting to his fellow Identity Europa members that feminists pose a dire, time-sensitive threat that must be confronted.

In a post to the IE Discord in late 2017, Loupe employs a common antisemitic dogwhistle by putting three parentheses around “Youtube” in order to imply that the company/site acts as part of a global Jewish conspiracy.

Loupe greets his fellow white nationalists in the morning by mentioning his hatred of “globalists,” another common antisemitic dogwhistle.

In the IE Discord channel devoted to sharing reading recommendations, Loupe suggests that others recommend the book “Culture of Critique,” by well-known antisemite and white supremacist Kevin MacDonald. Finally banned from Amazon earlier this year along with some of MacDonald’s other works, “Culture of Critique” is an excruciating screed that melds racist evolutionary psychology and classic antisemitic conspiracy theory into one pretentious neo-Nazi package. 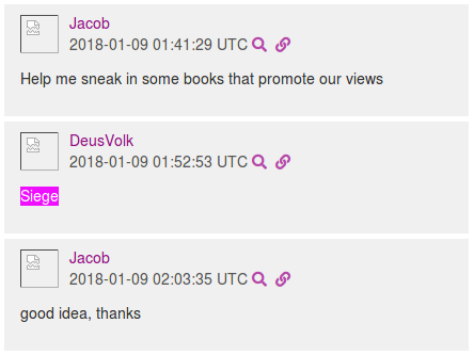 White nationalist organizations like Identity Europa, no matter how many times they attempt to “re-brand,” pose a direct threat to our communities, and Rose City Antifa stands committed to exposing & opposing their organizing. If you have further information on Alex Loupe, Identity Europa, American Identity Movement, or any other racist or fascist organizing in your area, contact Rose City Antifa at [email protected].